This Philly Native Was Shot at Age 16. Now He’s Bringing a New Kind of Movement to the City. 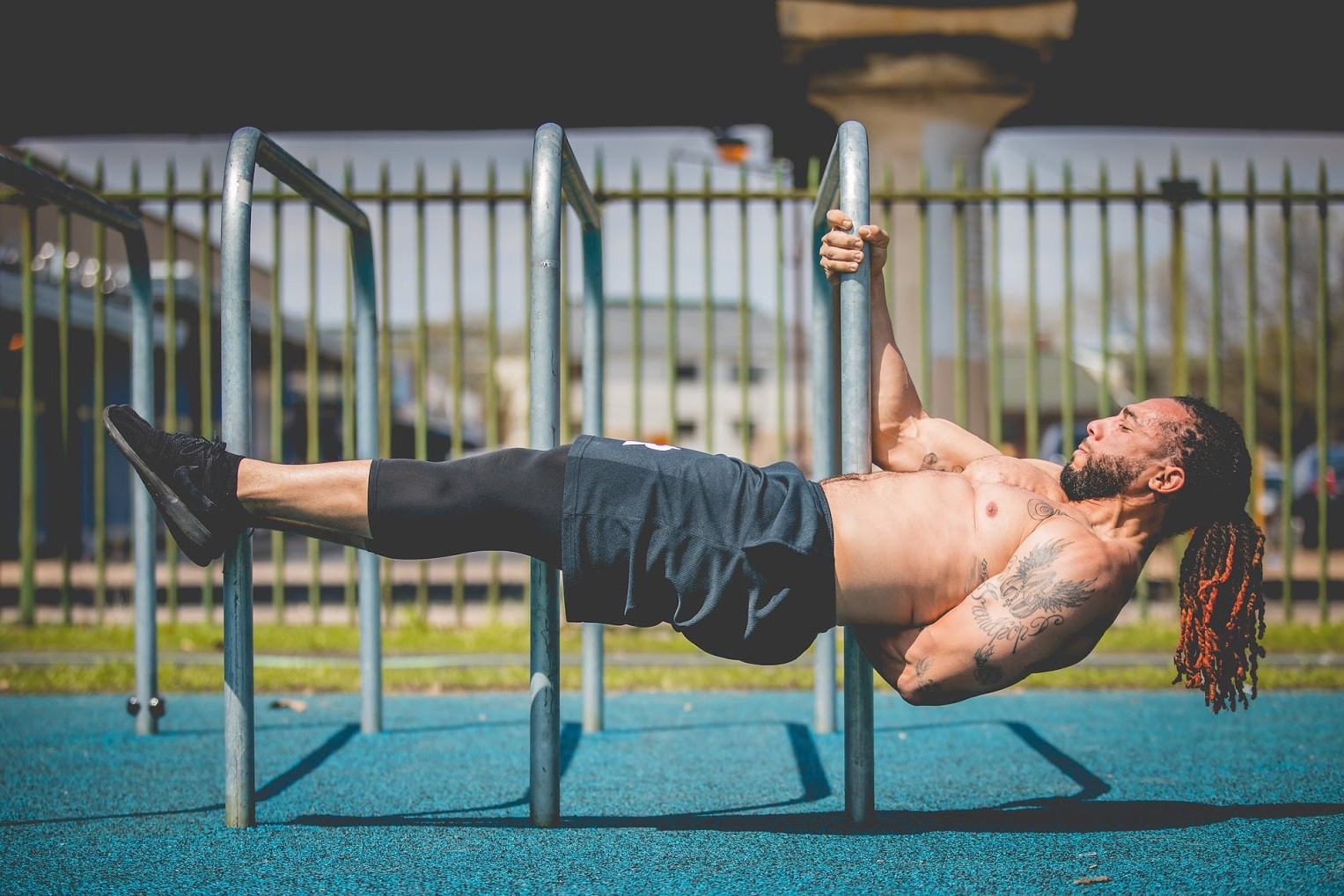 Where I live: Delaware County, but I grew up in West Philly.

What I do: I’m the founder of the National Bar League, a personal trainer, and a strength coach.

I was shot at 16. I was coming from football practice at Roman Catholic High School. I was in my neighborhood in West Philly, about two blocks from my house, and I was going to walk my friend home first. I was on the curb side, and a stray bullet went through my right arm, hit my rib, and then went down my back and stopped a little less than an inch from my spine.

I didn’t know until afterward that some bullets travel faster than sound, so if you get hit, you get hit first and then you hear what happens. I heard the shots and looked for cover. Then I noticed I was bleeding. I still had my book bag with my books in it. The police went through it later and they said to my dad, ‘Usually in situations like this, we might find a weapon or little things that show involvement. We found books. His homework was done.’

They left the bullet inside because the doctor said it was safer. I was in the hospital for about a week. I did have to take my time walking at first ‘cuz there was a lot of back pain. They let me go, and I was at home for a week. Once I was off the morphine and the painkillers, that was some of the worst pain I’ve ever felt in my life. Laughing was the most painful thing at that point, and your friends are class clowns at that age, so I couldn’t hang out with anybody.

I was out of school for two weeks, which I understand is a pretty fast recovery, but I couldn’t play football really. The next year I tried. I still managed to walk onto the college football team at Lincoln University, but I couldn’t really do what I needed to do. After I graduated college, I was training, lifting weights here and there, but it got boring, and I reached a point where I wasn’t satisfied. There wasn’t anything to make me feel that I was moving toward another level.

I’d seen Bruce Lee, people doing pull-ups and handstands, and that kind of stuff was always interesting to me. Then I discovered calisthenics and bodyweight training. These guys I saw on the internet, the way they were able to control themselves — at first I thought you could only do this if you practiced gymnastics as a kid. When I went to my first bar competition, the first guy who went up to perform did a pull-up, and he pulled himself so high in the air he threw himself off the bar and started doing bicycle kicks with his legs like he was pedaling. I was like — excuse my language — ‘Holy fuck. I want to be that strong’. If there’s any definition of learning how to fly and to break any limitation of what you thought was possible, that’s it.

I took a step back and started doing research, reading textbooks on bodyweight, and found everyone had these smaller principles. Everything comes in progression. Once you learn the basic movement and how the function works, you break it down to its smaller form and you build upon it. Take push-ups, for example. You start with literally learning how to push. You push against the wall and do standing wall push-ups. After a while, you move your feet back slightly to put more pressure on your upper body as you push back against the wall. As you master full movements, now your body starts to move down the wall. By changing the degrees, you start to learn to push better. After a while, the mechanics are so easy that it makes learning how to do more endurance-based push-ups so much easier.

At first, training was a lot of alone time. Everybody outside wanted to bench press and do curls, and I was like, ‘Let’s do 100-some push-ups and see what happens.’ I only had two types of days — a push day and a pull day. I don’t know what a back and shoulders day is anymore.

I was watching a lot of guys on YouTube, and they were at this competition in New York, the second annual Barstarzz Pull-Up Jam. I’d just been in a car accident — I was making a turn, and a truck hit the tail end of my car — so I had a pinched sciatic nerve and even more damage to my back. I wasn’t supposed to be working out. But they had a muscle up competition, and I had just learned how to do a muscle-up. That’s where you do a pull-up and then pull yourself over the top of the bar. It’s hard.

So I go to New York and in the crowd is every single bar athlete I am a fan of. These are superstars to me. I get in line, and I think, ‘OK, people are probably going to do 10, 12, muscle-ups. I’ll be OK.’ So I go into the amphitheater, and there are four guys before me. This guy, Juan, does 33 muscle-ups and makes them look so effortless. Did one so high he almost threw himself off the stage. The next guy, this dude’s about six feet, four inches — I mean jacked in the craziest ways you can think. He does 25. And then this little kid before me does 15. I was like, ‘Oh my god.’

In my mind, I was like, ‘I have to get double digits, I have to get at least 10.’ I get on this bar, and I start going. The first five are fine. I get to seven, and I was like, ‘Uh oh.’ Nine was really, really rough. By then, everybody’s screaming. They want me to get to 10. I pull myself up, and I’m kicking, swinging, fighting for everything I had. I pulled and I got 10. Everybody who saw me, they gave me a lot of credit because I was 200-something pounds doing this.

The next year, I actually battled in my first competition — I went to New York again, and I won. I ended up becoming good friends with all these guys I was once fans of. I went from a football player who could not do too much to being able to compete with these guys on a gymnastic-type professional level.

Then I wanted to start a Philadelphia Barstarzz chapter. Barstarzz is the biggest calisthenics group in the world. [Eduard Checo], the guy who started it was like, ‘Eh, we’re not opening new chapters right now.’ I came back home a little disappointed but was like, ‘You know what, screw it. Let’s start our own.’ It started as the Philadelphia Bar League. We were throwing competitions, and people were coming out, but I wanted to do something bigger. I wanted to create a platform for bar athletes to take the opportunity to become professionals and get paid, so that became the National Bar League.

Right now, there’s money involved, but it’s still on the level of how skateboarding was when it first started — not really recognized where major brands are like, ‘We want this athlete.’ Last year, though, I got Red Bull and Kind bar snacks involved. I’ve been talking to New Balance a little bit, so I feel like I’m close.

It helped when I designed the bar park for Smith Playground in South Philly [that opened in April 2018]. There are five or six bar parks in the country — Venice Beach, San Diego, Miami, South Beach, smaller ones in new York like Thompson Park — so to have one in Philly is pretty incredible. I worked with Connor Barwin’s nonprofit Make The World Better Foundation, and they raised the money and gave me the green light to design the whole bar park. Now we have six pull-up bars, two sets of dip bars, and push-up bars. 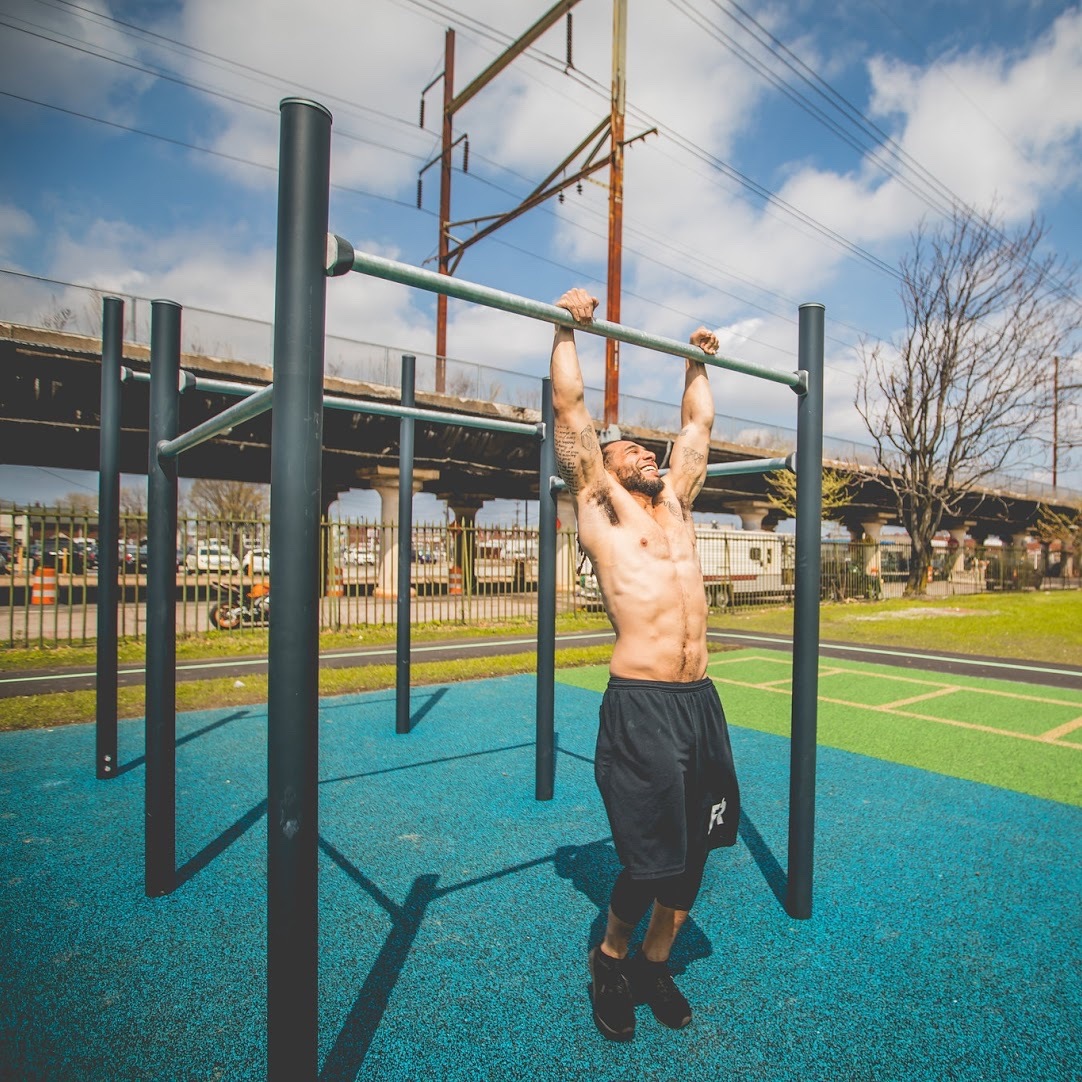 I was doing free Saturday boot camps all last summer at the bars just to teach people how to use them and come out and have fun with us. I like the rec center down there and what they do for the kids — cooking classes and podcasting and a bunch of different things. I hadn’t heard about many girls’ basketball leagues in the city, so when they talked to me about starting one, said I wanted to help. So I’m putting together a fitness festival to raise money for that and different bars for the park — the company actually put the wrong-size bars in so they’re too big for everyone to use. It’ll be June 1st at the Smith Playground Recreation Center from 10 a.m. to 3 p.m. There’s going to be a bar competition, and Zakti’s going to do a functional fitness boot camp. We’ll have basketball activities going on for the kids, volleyball stuff up, and cornhole, too.

We all have in our heads the thought of limitations. We all look at somebody doing something amazing and we say we can’t do that. But for people who want to achieve something, from the fitness aspect of things, I say don’t put a limit on yourself. Don’t be afraid to push yourself because it’s going to be necessary. People always ask me about the biggest advice I can give them. I say: Log all your workouts, and every time, do a little more than you did last time. I have about six full journals front to back, and I still log to this day. It does make you feel good when you go back to the front of that journal and it’s a lot different than the end of the journal. Sometimes it still amazes me that when I first started I could barely do more than three pull-ups in a row. Now I’m somewhere around 20 in a row and can pull myself up to about my waistline.

One of my clients — he’s in his 60s, a firefighter got a really bad wrist he had surgery on, with a little bit of carpal tunnel. I’ve been training with him for over a year, taking things slow. I’m sure it’s been frustrating doing wall push-ups, watching other bigger guys doing bench press and other things you feel you should be able to do. But he stayed with me and took his time. Recently he did 100 push-ups, and I was so proud for him. He went from not being able to push at all to doing that. It’s just mastering a progression of one difficulty and moving forward to the next. It feels amazing.