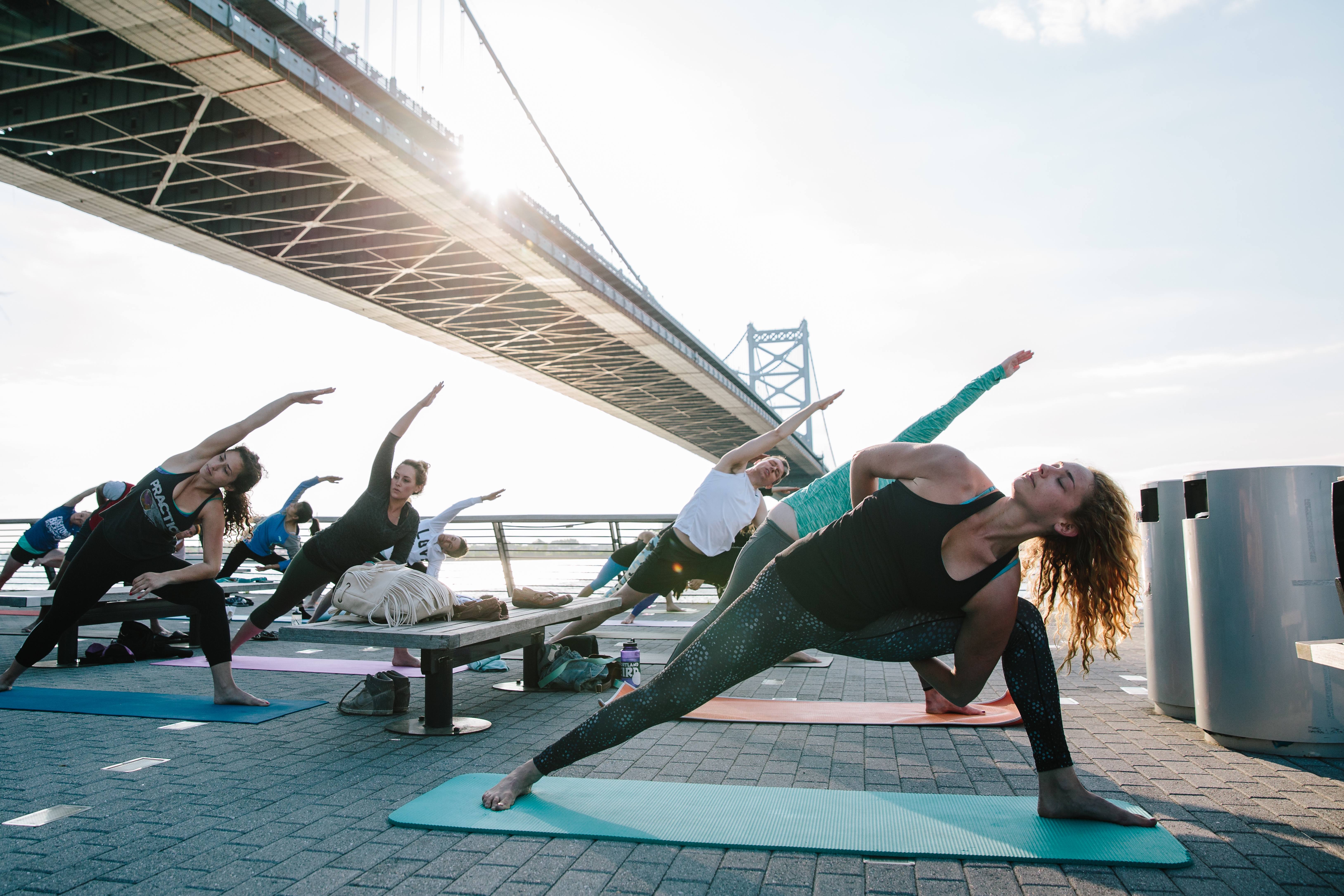 The free yoga series Yoga On The Pier starts back up April 19th. / Photograph by Matt Stanley

There’s a reason that getting a “change of scenery” has become a cliché at this point: It actually does work to clear your head. But there’s this impression that you need to plan a weekend trip to the Poconos or take a weeklong vacation to, say, Hawaii — and engage in all kinds of relaxing activities you wouldn’t normally do — in order to truly resettle your mind.

Sometimes, though, you just need a different view. For instance, eating your go-to dinner of fish tacos at an actual table instead of balancing the plate on your lap while watching Queer Eye on the couch (just us?) can be LIFE-CHANGING. Hanging at a friend’s house for the 20 minutes you wear your clay face mask can infuse some life into your skincare routine. And the ultimate routine mixer-upper? Taking your workouts outside.

Plenty of organizations have already started — or never stopped! — their open-air exercise for the year (think: November Project, every running group). But, starting April 19th, the slate of al fresco fitness options will expand quite a bit, thanks to the return of Yoga On The Pier.

The Delaware River Waterfront Corporation and yoga instructor Malik Wilson are partnering for the sixth season to offer more than 300 free classes on the striking Race Street Pier, right next to the waterfront and the Ben Franklin Bridge. In general, sessions will take place through November 12th at:

However, Wilson will also host special “twilight” offerings at 8:30 p.m. on the nights with full moons. The inaugural late-night classes will kick off the very first night of Yoga On The Pier (Friday, April 19th) in celebration of the so-called pink moon. Don’t worry if Fridays are a tough day to attend; the full moon doesn’t keep a 28-day schedule, so these classes will rotate between different days of the week. (We’ve got Sunday, August 15th, marked on our calendars already, mostly because we want to get a glimpse of that month’s “sturgeon moon.”)

Yoga On The Pier will also offer yoga mala, a traditional practice during which you do 108 sun salutations, to celebrate the summer solstice on Friday, June 21st. Major holidays — Memorial Day, Fourth of July, Labor Day, Columbus Day, and Veterans Day — over the course of the yoga series will get their own pier classes, too; all will be held at 9:30 a.m. See the full schedule here.

We’ve been crossing our fingers that the good weather will keep up forever, but it’s inevitable that a summer shower will get in the way of some Yoga On The Pier classes. Keep tabs (literally) on the Yoga on the Pier Facebook page for updates; typically, Wilson will cancel class 30 minutes before it’s scheduled to start if thunderstorms are on the horizon. But, hey, if your typical routine calls for outdoor yoga, moving your practice to your living room — with a soothing backdrop of rain on the roof — sounds like a good change of scenery, too.