We're talking vintage Sixers jerseys, Flyers gear, and even a yarn installation of the Philly skyline. 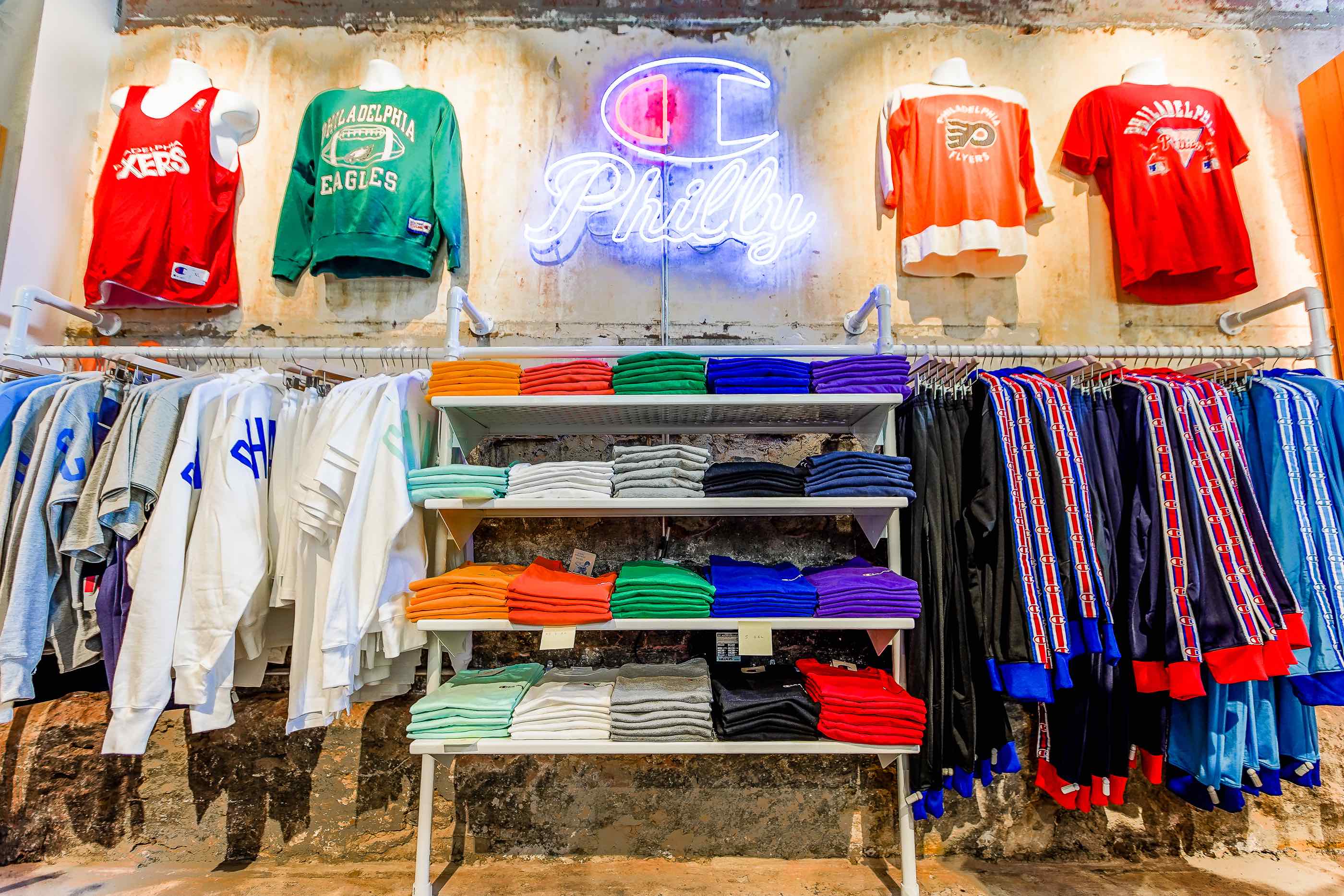 Champion’s opening a store in Center City, and it’s got a Philly flair to it. / Photograph courtesy Champion

Philadelphia’s got some cred as one of the OG sports towns, with the Phillies franchise dating all the way back to 1883. The sportswear brand Champion is almost as old; it celebrates its 100th anniversary this year.

But our city and the iconic company, known for inventing the hoodie and outfitting professional sports teams (and those quintessentially ’90s gray sweats), have more than that in common. They’re both going through a national resurgence. Champion’s come sprinting into the sportswear spotlight in the past few years, thanks in part to collaborations with viral brands such as Supreme. Philly’s rampant development combined with major sports victories — both literal like the Eagles Super Bowl win and cultural like Gritty — have secured us the label as a city to watch. We forgotten middle children are finally making ourselves known.

So it’s appropriate then that Champion will open a brick-and-mortar location in Philly this Saturday at 1507 Walnut Street in Center City. “Philadelphia has such phenomenal sports tradition and unique culture,” says David Robertson, the director of Champion brand marketing. “We think it’s a city that is a great match with Champion — it’s always been strong in the Philadelphia area — so now to have an opportunity for our consumers to interact directly with the brand is something we’re really excited to be able to bring.”

Opening its own shops has been part of Champion’s recent evolution as well. Historically, everywhere from Dick’s Sporting Goods to Foot Locker to Macy’s sold Champion goods, but you couldn’t walk into a Champion store and try on a sweatshirt. Recently, though, the company has been tapping into consumers’ mounting desire for experiential shopping and launching curated stores in select markets. Philly is just the fifth city to get a Champion store; you can also find them in Los Angeles, New York, Boston, and Chicago (all up there when it comes to America’s best sports towns).

And the Champion store will have intense Philly vibes. Think vintage Sixers and Eagles jerseys, sporting Allen Iverson’s #3 and Reggie White’s #92, hanging on the walls. A mural done by Philly native Alloyius Mcilwaine that features obvious Philly icons, such as a cheesesteak and the Liberty Bell, but also references slang like “jawn.” Local street artist Ishknits even created an installation of Philly’s skyline completely out of yarn. And the shop will sell Flyers apparel as well as Penn- and Temple-branded sportswear. “We don’t want to do cookie cutter or one size fits all,” Robertson says. “We think Philadelphia has a unique personality, and we want to embrace that and do things that are special for Philadelphia.” 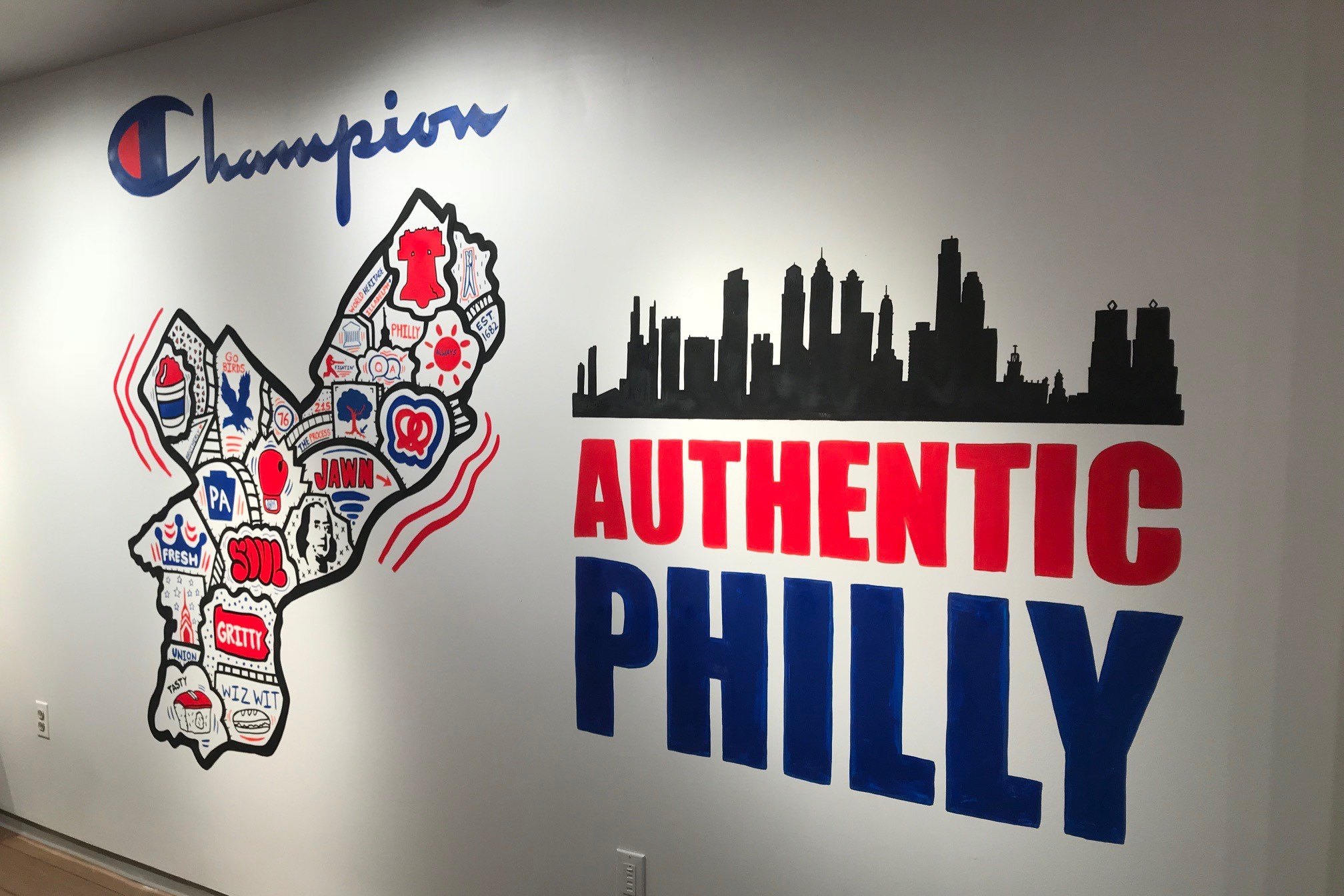 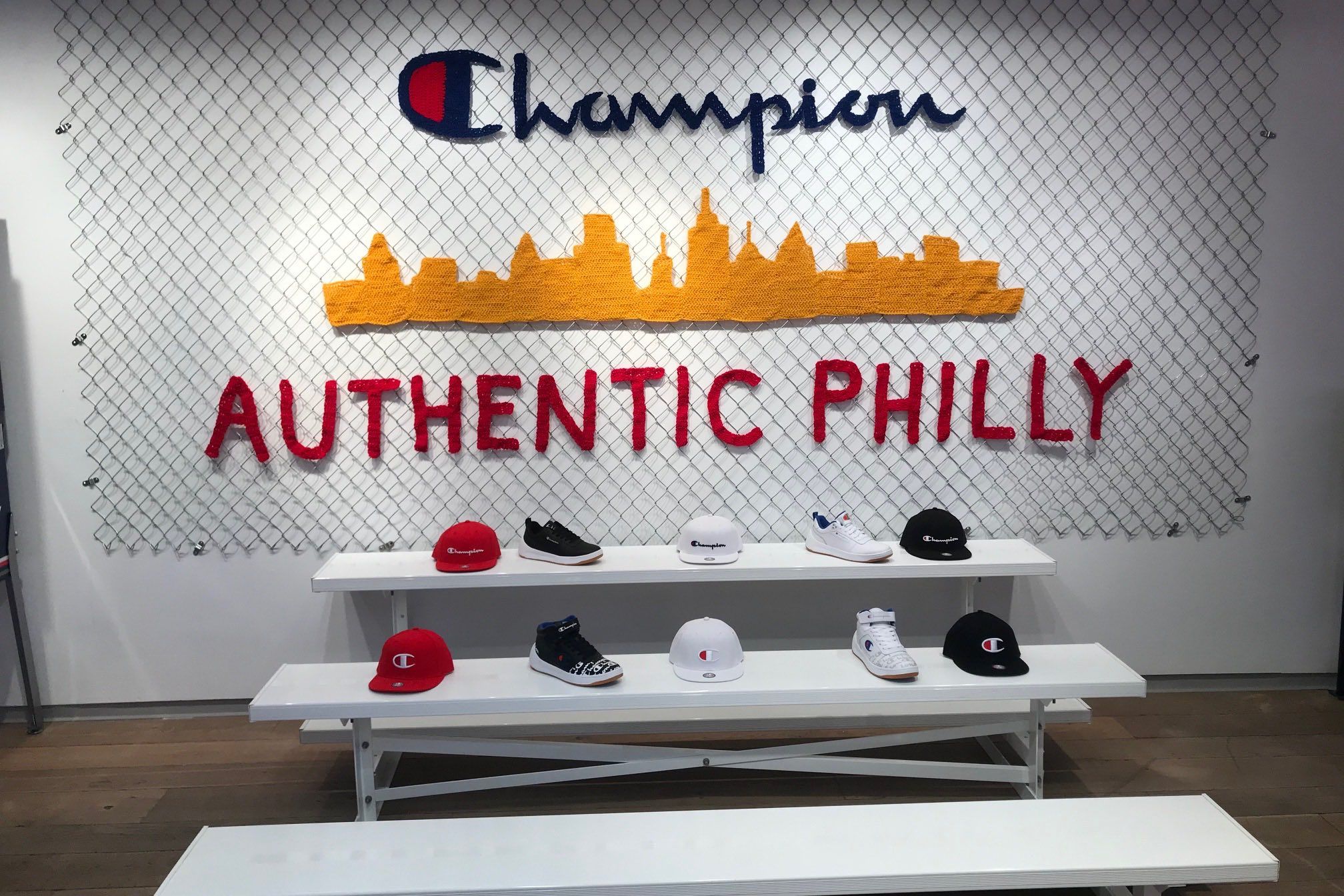 Plus, if Champion’s gear isn’t Philly enough for you (or you just want to put your own twist on it), the entire second floor of the store is devoted to customized pieces, meaning you can essentially design your own hat, socks, etc. Although Champion has offered this service in other stores before, this will be the first time the company has given over an entire floor to customization.

If that wasn’t enough, Champion also plans to feature limited-edition items that will only be available in the Philly store, starting with a tote bag that Mcilwaine, the mural artist, designed. The first 500 customers in the door when the store opens at 10 a.m. on Saturday will receive the bag free of charge. Don’t worry if you miss it, though. We bet you’ll be hearing more from Champion, just like Philly.