Curling 101: The Basics Behind the Olympic Sport

Ian Alexander, vice president of the Philadelphia Curling Club in Paoli, is here to straighten things out. 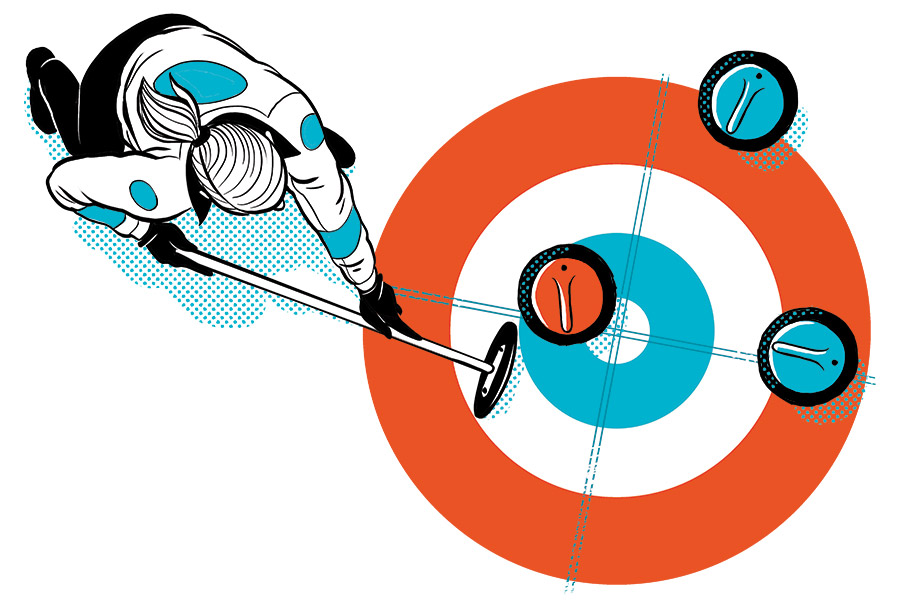 Raise your hand if you have zero clue what curling is all about. (We’re with you.) To help straighten things out, we gleaned the basics from Ian Alexander, vice president of the Philadelphia Curling Club in Paoli.

The Lingo:
The bull’s-eye-like circles on the ice make up what’s called the house; the center of the house is called the button; the 42-pound granite objects players push toward the house are called stones; sweeping is what the players holding brooms do to help the curling stone reach its target.

The Objective:
The goal in each “end” (think: like an inning in baseball), after both teams have thrown their eight stones, is to have at least one stone closer to the button than any of the opposing team’s stones. Only the team with the stone closest to the button scores points for that end. There are 10 ends total, and whichever team racks up the most points wins.

The Details:
Some things to keep your eye on:
1. Shot-making percentages: Look for these graphics throughout the Olympic games, Alexander says; teams with higher shot-making percentages are more likely to win.
2. The hammer: This is the last stone thrown in each end, and it’s the only shot that goes unanswered by the opposing team. Meaning: It holds a lot of power — the team with the hammer can knock the opponent’s best stone away from the button with no risk of retaliation.
3. Spectacular shots: Double and triple takeouts, when one shot knocks two or three of the opposing team’s stones out of play, can really turn a game around, Alexander says. Just listen for gasps from true curling devotees to know if a team has made one.

» See Also: The Know-It-All Guide to the Winter Olympics

Published as “Get Your Games Face On: Curling 101” in the February 2018 issue of Philadelphia magazine.