Be Well Family: My Tried-and-True Game Plan for Traveling with Young Kids 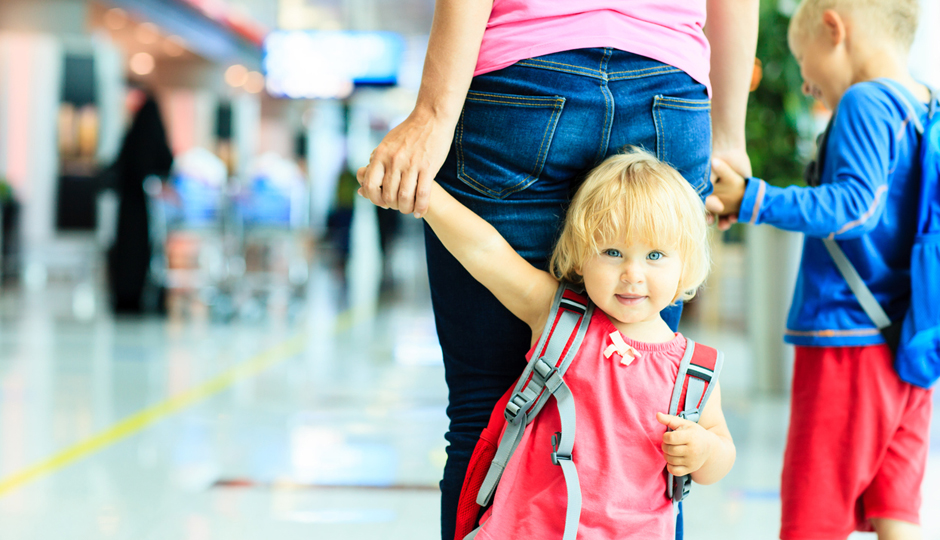 mother and two kids walking in the airport, family travel

My husband and I have been flying with our kids since they were infants. Nothing too crazy, mostly lots (and lots) of trips to Florida, and a couple of flights out west. Now, flying with infants is basically all about a strong drink and then counting down until the wheels hit the ground. But flying with the bigger kids — aged two and up — can actually be dare, I say, pleasant. At least that’s what I discovered once I honed my flight game plan. First the rules I live by, then the plan.

Rule #1. It’s all about time management. I am very calculated in the order in which I do things, and I divide up the flight the way I would schedule a morning at home: breakfast, some play, an errand, snack, TV time, lunch and nap. That sort of thing. But more on that later.

Rule #2. Get new stuff to do. New stuff gets kids excited. New stuff keeps kids occupied. New stuff can be as simple as a sticker book from the dollar bin at Target, one of those magic disappearing marker things from Rite-Aid, a deck of Go Fish cards, a Matchbox car, a project like making a birthday card for a friend. I also like to pack a few old things, like a Lego set they haven’t played with for a while. But keep that part secret.

Rule #3. Let them pick out a few special treats at the airport, after you are through security. I usually do one package of candy and one crappy snack that I would normally never let them have. (Sasha always goes for Cheetos, which she calls Cheetahs.) There are two key takeaways here. First, the newness. Second, the picking-it-out-at-the-airport-ness. It makes kids look forward to getting to the airport and easier to deal with security and such.

Rule #4: Bring videos and games, be them on an iPhone, iPad or iPad-like device. I always download a new movie or some new shows and a few new free game apps. And — this is an important one — I don’t let them use the devices for days before the trip, and no TV at all the day of the trip. (The deprivation tactic works!)

Rule #5: Talk about the trip for weeks, including what the travel plans are. Talk about how long the flight will be. “We are going to the beach in Florida! So exciting. But first, we get to drop our car off at a lot and take a bus to the airport! And then, at the airport, you’ll get to pick out special snacks. Then we’ll be on the airplane for a long time, but then you’ll be at the beach!” Yadda, yadda, yadda. That way, the adventure starts the second you get in the car and expectations will be set.

(Optional rule: My kids have their own carry-ons, with their own stuff that they love to drag through the airport like the grown-ups. It also keeps things organized.)

The schedule:
Now that the stage is set, let’s get back to my first time-management rule. This is the key to the whole thing. I’ve found it’s best to hold out as long as you can on the two things they want most, which are the iPad and the candy/snacks. So, I have a rule that they can’t have candy until after takeoff and that they can’t have the iPad until they’ve burned through most of the other activities. Plus, I’ve found that once they get their fill of the iPad (after a few shows and some games) the older kids are like a ticking time bomb, so best to hold out for as long as you can. At that point, after the snack, games, some art, the candy and then iPad, you are probably close to landing.

Weeks before: Talk about trip and travel logistics. Tell them what will happen, shuttle to the airport, security line, and then they can pick out two special snacks.

After security: They can spend as much time picking out two snacks and maybe another activity book. They can’t touch them until after take-off though. We then walk around the airport, eat a meal, play freeze tag, have races, hide-and-seek, anything to keep them moving before boarding time. Hit up the bathroom too.

On the plane: There will be a lot of begging for the new snacks, activities and iPad. Don’t give in! Remind them that they’ll get their first snack after take-off, when the plane has leveled out.

After take-off: First snack. No other activities while snacking. After that’s over, do your first new thing. Sticker book, art project, etc. Then do your second thing (this is a good time to do a together-thing, like a card game or activity book). By this point you should at least be 45-min to an hour into the flight. If you’ve got a longer flight, stretch this part out as much as you can. Take out the older “surprise” toys your kids didn’t know you packed. Play an I Spy-type game. Whatever works. The point is to hold out on the digital entertainment until they are about to lose it.

When they are about to lose it: iPad time! This should be at least an hour of shows, movies, and playing around on their new apps and old apps.

When iPad time gets old: Second snack. Followed by playing another game together, revisiting an art book, maybe there’s another old toy that you threw in there as a surprise. Even looking through baby photos or flipping through Snapchat filters on my phone works. Key here is that you’ll probably need to take them through the homestretch, but it’s been such a pleasant experience, that’s totally doable. No strong drink needed!

PS-We’ve also got a round up of great travel gear over on Wee Wander.