Thanks to some serious investments, Philly is finally getting back in touch with its rivers. Here's everything you need to know about Bartram's Mile and the park over I-95, plus 16 ways to have fun on and near the water. 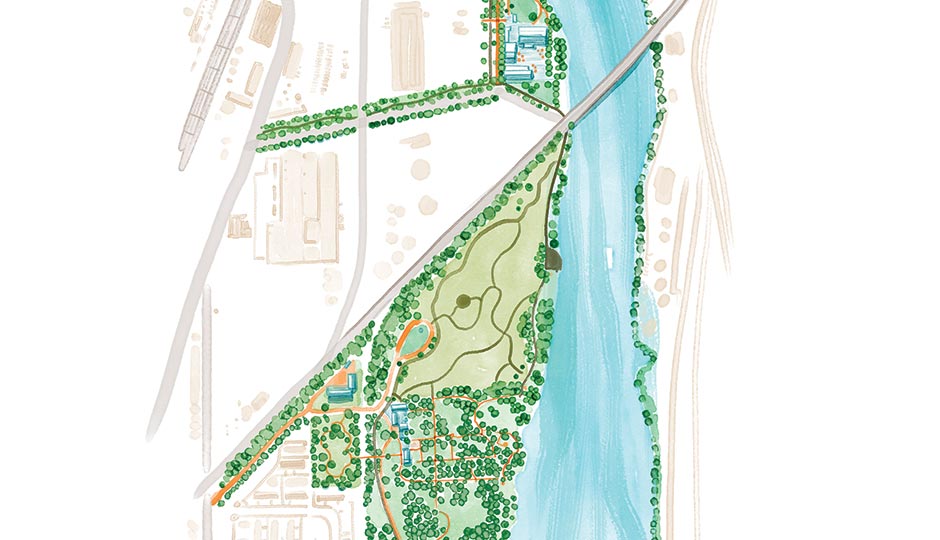 The latest, and southernmost, segment of the Schuylkill River Trail held its ribbon-cutting in April, and it’s remarkable: Once an industrial eyesore, Bartram’s Mile runs along the western bank of the river and zigzags through the country’s oldest botanic garden. Here, the new POIs and future plans for this stretch of the SRT.

Schuylkill Crossing: In the next few years, an old swing bridge will be transformed into a pedestrian-and-bicycle-only cable-stayed bridge. The fully funded $23 million project will link Bartram’s Mile to the eastern banks at the Grays Ferry Crescent Trail. There, after some obstacles are cleared, the trail can connect to Center City.

The Newkirk Monument: For decades, a 15-foot marble obelisk—a gift in 1839 to celebrate the completion of the original Grays Ferry Bridge—was neglected behind weeds. After the graffiti got scrubbed off, the monument was (carefully) moved to the northern end of the trail.

Outdoor Art: Eco artist Stacy Levy is installing works around the garden this spring: Floating structures in the Schuylkill will show off the river’s ebb and flow, and there’ll be special cantilever seating onshore for observing the tides.

Meadow: What was once an old concrete factory is now a field of grasses with an unrelenting view of the skyline. (Bring your iPhone.)

Bartram’s Orchard: Meander into one of the largest orchards in the city—from apples to almonds, 125 trees are filled with fruit and nuts.

The Trail: The 1.1 mile-long path weaves through the historic farm and heads north. 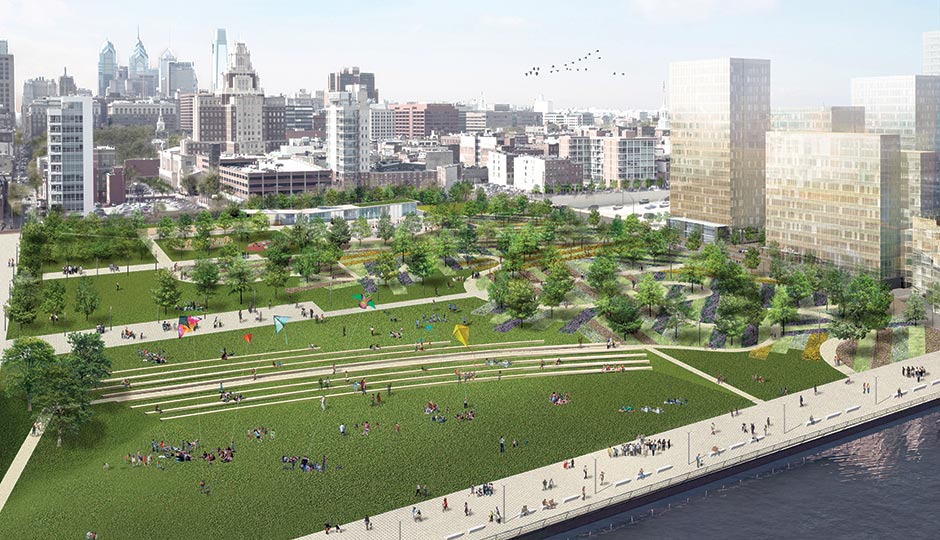 A Park in the Sky

Why The Plan to Cap I-95 Works

Ever since the I-95 underpass was completed in the 1970s, there have been proposals to eliminate it. “There were well-intentioned plans before, but each fell apart because of the huge costs,” says Delaware River Waterfront Corporation president Tom Corcoran. (One such idea: Bury I-95 à la Boston’s Big Dig, for billions.) This time, the DRWC worked closely with PennDOT to figure out something feasible: capping the interstate and Columbus Boulevard with a park (rendering above). Now this $225 million project is nearly funded, thanks to buy-ins from the city ($90 million), PennDOT ($110 million) and the William Penn Foundation ($15 million). Plus, it helped that projects like the Race Street Pier have proven how vibrant the Delaware can be.

The Highlights
Spanning the Chestnut and Walnut bridges, the 11-acre lawn will have a plaza, an amphitheater, a spray ground and the Blue Cross RiverRink and will slope 30 feet down to the river.

The Timeline
The DRWC will spend the next two years in prep mode, followed by three years of construction, but shovels are expected in the ground by 2019/20. One challenge is to figure out traffic patterns once lanes of both I-95 and Columbus Boulevard are temporarily affected.

But Wait—There’s More
Beyond the elevated green, plans call for an esplanade to be built along the river; a new two-way bike and walking trail along the Boulevard between Washington Avenue and Spring Garden; South Street’s pedestrian bridge to be extended to the marina; and Spruce Street Harbor Park to get additional amenities. 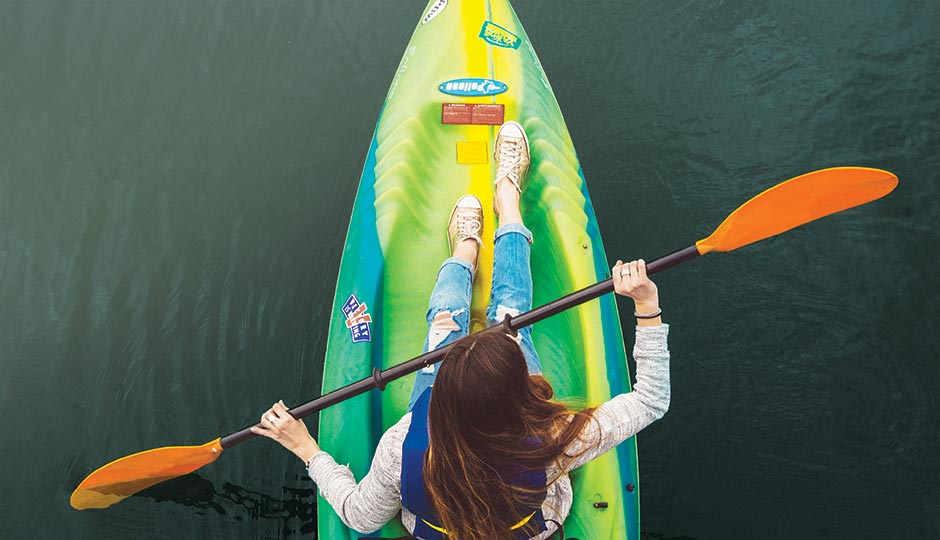 3. Do the Dad Vail.
It’s the biggest collegiate regatta in the country, literally: 120 colleges head to Kelly Drive to race on the Schuylkill. May 12th-13th.

5. Bike to Work Day.
With “energizer stations” along designated trails. May 19th.

6. For the fam.
Free paddles on the Schuylkill, plus other family-friendly activities, at Bartram’s Garden’s annual River Fest. June 3rd.

7. Day-drink.
Morgan’s Pier, Philly’s bar with the best view, has tapped the crew from Helm to put out farm-fresh eats this summer.

8. Walk the plank.
Let the kids play Jack Sparrow at the new “Patriots & Pirates” exhibit at the Independence Seaport Museum. They can drop anchor, hoist sails and more aboard the 102-foot model schooner.

10. Swing and skate.
The opening party for Spruce Street Harbor Park (May 12th-14th) has live music, aerial routines over the marina and draft cocktails; this year at Blue Cross RiverRink, the arcade is beverage-friendly, and the roller rink is open-air. That opens May 26th. 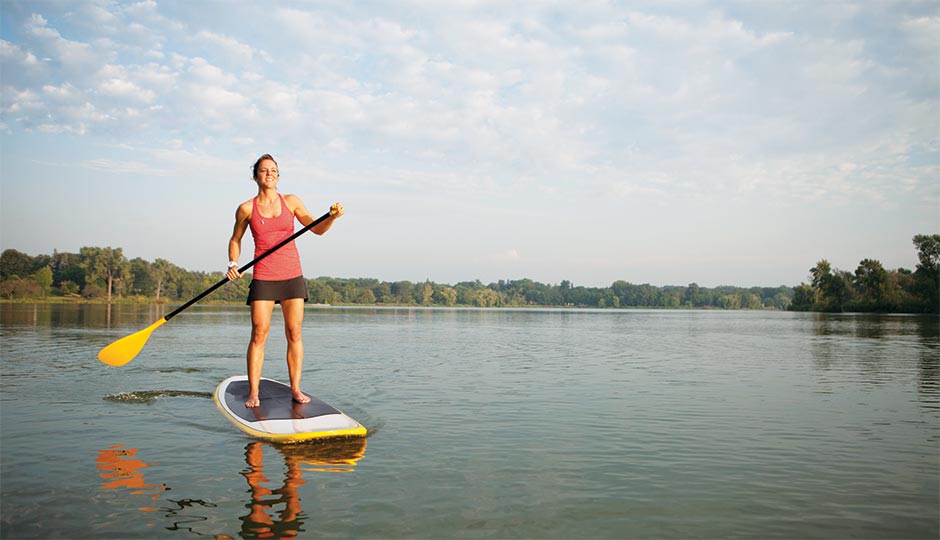 Six ways to roll with the tide

Pedal and Row • Penn’s Landing’s adorable marina has supersize foot-pedal boats that come in both “dragon” and “swan.” Or kick it Revolutionary-style in a rowboat.

Paddleboard • Hidden River Outfitters offers rentals and lessons on the Schuylkill Banks, while Aqua Vida hosts SUP yoga (including a moonlight class) and boot camps on the paddleboards at the Penn’s Landing Marina.

Sail • Know the difference between “leeward” and “windward” after a weekend of classes with Liberty Sailing School of Philadelphia at Pier 12 in Old City.

Kayak • Push off the Walnut Street Dock as part of a guided tour from Hidden River Outfitters and get new views of the city plus a pretty decent workout. (Moonlight tours are also available.) Or head over to Bartram’s Garden, where kayaks are free on Saturdays.

Boat • Learn the Schuylkill’s secrets—like why it’s nicknamed “hidden river”—during a one-hour riverboat tour. For a longer excursion, the “Boat to Bartram’s” includes a two-hour stop at the historic garden.

Published as “The Know-It-All Guide: Take Me to the River” in the May 2017 issue of Philadelphia magazine.