A Q&A with Erica Daniels, the author of Cooking with Leo. 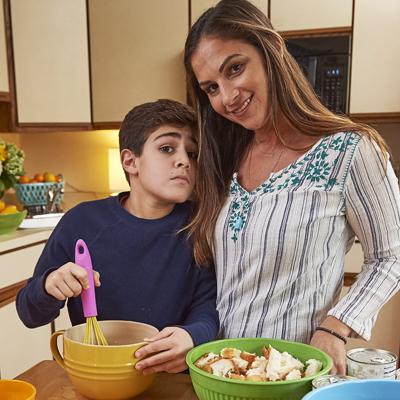 Raise your hand if you or your kids have food allergies or struggle with autism-related food issues. Okay, now meet Maple Glen resident and autism advocate Erica Daniels, your night in shining apron. When Daniels’s son Leo, now 12 years old, was a year old, she found out he had a peanut allergy. Then, a bit later, she found out he was struggling with autism and was affected by GI issues, too. This news led to years of experimenting in the kitchen — often with Leo by her side — to create allergen-free recipes her entire family could enjoy. The fruits of all this labor: A new allergen-free autism family cookbook, Cooking with Leo, complete with over 60 recipes free of common allergens like gluten, dairy, soy, nuts, and more. Or: Your new cooking bible.

The book, which came out January 17th, is part recipe book, part story of how the kitchen became Erica and Leo’s bonding place. Along with being an advocate for families dealing with autism and food allergies, Daniels is also the founder of hope4Leo, a nonprofit that aims to improve the lives of families affected by autism. And she’s been getting lots of attention: Just last week, Today.com featured her family’s story in a “dawwww”-inducing video which you can watch here. It’s been viewed nearly 1 million times.

Last week, we chatted with Daniels to glean some advice from her on allergen-free cooking, helping your kids shine through their disabilities, and where to go for allergen-free eats when cooking isn’t in the cards. (Surprisingly, the Cheesecake Factory is high on Daniel’s list!) See our Q&A below.

How did you and Leo first connect over cooking?
Everyone asks me this question and I wish I had this great answer. When he was a year old, I found out he was allergic to peanuts, so I knew right away that there was a significant allergy problem. I started out really just having to learn about food allergies and going to the grocery store and cooking for him to him being interested and involved. He was always interested in food and he would hang around the kitchen and try to do things on his own. I would come in from the other room and there would be a cake mix in a bowl with eggs in it, half-made, half a mess. He also struggled academically, and I learned I could teach him things hands-on in the kitchen. It was a very natural process and something he very much enjoyed.

What prompted you to take on the task of writing a cookbook?
I still say, I’m not a chef, I’m just a mom who cooks. I don’t present like a chef. You can tell from the book, it’s very organic. Again, it was sort of natural. I needed a place to keep track of recipes. I started by making family recipes and turning them allergen-free. So instead of having something where Leo couldn’t eat things, I started finding ways to substitute and avoid so that we could all share the food as a family. We were in the kitchen cooking one day, and one of his therapists said to me, “You should write a cookbook!” From there, I just started compiling my thoughts and ideas.

What advice would you give to other parents dealing with a child struggling with autism or food allergies?
A lot of kids with autism or food allergies, those things in themselves can be very isolating. With this book, I’m hoping that they can overcome that and come together as a family again and go back to the basics of family meals — something that may have become stressful because of the food allergies. I’m hoping that can be something that brings joy and family time back to them.

And also, I would say, to never give up: Find your child’s gift — there’s something there. Never give up. People assume that people with autism are savant-like, and that’s not really true. So people would say, “Is he really good at math?’” And I would say, “Well, no.” And he’s not a savant in cooking either, but he does enjoy it. Not all kids are going to be good at sports. They’re not all going to be straight-A students. There might be other things in there, and if you just nurture it, it could be important.

You call Cooking with Leo autism diet-friendly — can you explain what that means?
Many children with autism go on many special diets. A lot of times, they have GI issues and food sensitivities, which Leo has and had. He’s been on every special diet imaginable. I go through them in the book, and what I’ve learned and what I try to to tell other families with autism is that — while yes, this book is allergy-free and autism-diet-friendly — you don’t really have to be on a special diet, you really just need to be on a healthy diet. It’s really about eating healthy and teaching your kids to eat healthy. I say there’s no such thing as junk food, it’s either junk or it’s food.

Creating a cookbook is quite the process, let alone creating a cookbook free of so many allergens. What cooking tricks did you pick up along the way?
You can always find something in your house to use. There are so many times where I’ll use, for example, for the Pineapple Spoon Bread recipe, I don’t always have pineapple in the house. You can always look around and throw apple sauce in. Apple sauce is also great to use instead of eggs and sometimes instead of butter. I never don’t make anything because I’m afraid there isn’t a way to do it. It’s never going to be perfect.

I think a lot of the time, eating clean and eating allergy-free are very similar: We’re avoiding certain allergens, but also just not eating a bunch of junk. If you buy whole foods, you don’t have to worry too much about the common allergens like gluten and dairy. They’re just kind of naturally allergy-free. I have kitchen rules in the book (see them below), like we blast music and make it fun like a dance party — drink a little wine, open a beer while you’re cooking. It’s always more fun when it’s not a chore. No one likes to clean up, but turn that into a clean up dance party … 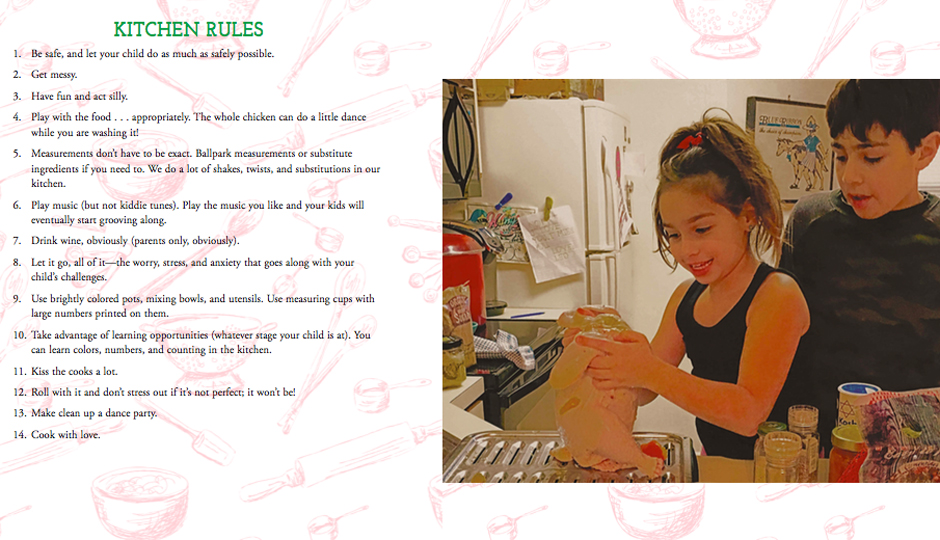 Image from Cooking with Leo

Dealing with a kid who can’t eat a ton of foods — or simply refuses to — can drive a person nuts. What advice would you give to parents dealing with restricted eaters?
With Leo, and what happened with him, is we just never gave up. I remember his grandfather, it was important to him that Leo ate lettuce. We started him early. It was just like, never give up. He would keep offering lettuce to him and Leo would say no, but he kept offering it to him and literally like a year later, Leo said yes. I also find that when kids help you cook, they’re more interested in actually eating it. Like, Leo loves to go grocery shopping. Or you can make fun foods like popsicles at home. So instead of buying the ones with all the crappy stuff and allergens, you can at home make it with some juice and some fresh fruit.