Still no confirmation on whether the whole “an apple a day keeps the doctor away” saying holds true, but it does look like an apple a day might keep weight gain away: A recent study published in Food Chemistry found that apples are loaded with non-digestible compounds that up the number of good-for-you bacteria in your gut, which is associated with weight loss, Prevention reports. So, who’s up for an apple-picking party this weekend?

The study, which was performed on mice, found that obese mice that were consistently fed apple compounds ended up with gut bacteria similar to that of heathy, lean mice. So how does that apply to us humans, you ask?

Well, our gut bacteria act a lot like that of the mice: As lead study author and food scientist Giuliana Noratto told Prevention, when you chomp on an apple, these magic weight loss compounds—otherwise known as fiber and polyphenols—remain undigested until they reach your colon where they’re fermented. Then, the good-for-you bacteria in your colon chow down on the compounds and the number of good-for-you bacteria grows, outweighing the bad, twinkie-loving bacteria population (seriously—some of your gut bacteria want you to eat junk food. Jerks.). The restored balance of good versus bad bacteria in your gut boosts the “I’m full” feeling, so you don’t end up overeating throughout the day. And voila: Your jeans get a little bit looser.

Now, when you’re deciding how to up your apple intake, just know: apple pie doesn’t count—cooking apples kills the polyphenols. Instead, try pairing an apple with almond butter for a snack. I’m currently obsessed with smearing my apples with Justin’s Maple Almond Butter; The combo is outrageously delicious and super filling—perfect for those 3 p.m. hanger attacks. 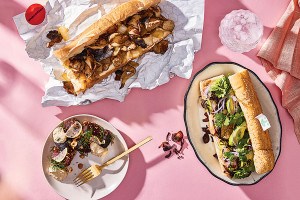