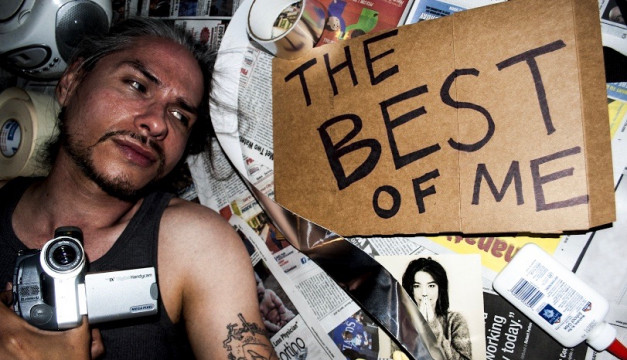 The Best of Me (from 4SOLO at Simpatico Theatre)

Simpatico Theatre partners with the Philadelphia Fringe Festival for their season’s opening venture. 4Solo turns out to be the perfect crossover, combining the company’s usual virtues—supporting local artists, telling stories very much of our time—while also delivering the eclectic energy we expect from Fringe. On opening night, what I saw was actually 3Solo—all works that, as the title suggests, are solo performance pieces. There’s a fourth still to come, and the schedule changes throughout the run, but what I saw was terrific. These aren’t merely original works—they’re brimming with originality.

My group (in the order I saw them):

I was hooked by Jeremy Gable’s delightful, poignant Idaho Shuffle from the very start. To be sure, I have some personal attachment to the subject of this exceptionally imaginative memoir-through-tap-dancing. I myself took tap in junior high, though I never got even close to Gable’s very impressive skills. In my adult life, I’ve left dancing behind, but I teach musical theater history—and I’ve discovered that although different groups of students love different things, everybody goes crazy for Fred Astaire.

Gable doesn’t have Astaire’s glamour or suavity. (Who does?) That’s rather the point. This self-defined awkward kid, growing up in a small Idaho town, discovered tap as a way to figure out who he is. As he explains in his very eloquent script, his was “a childhood studied as opposed to a childhood experienced.”

His odyssey is the centerpiece of Idaho Shuffle. Gable employs a device so simple but effective I can’t believe I’ve never seen it before: he performs live through dance and mime, while his recorded voice provides spoken narration. It’s a knockout idea that works on every level. For 70 minutes, Gable has us in the palm of his hand. Much of it is absolutely charming, but the show packs a surprising punch with a final message to take seriously: even outsiders need to question their own relationship to power. 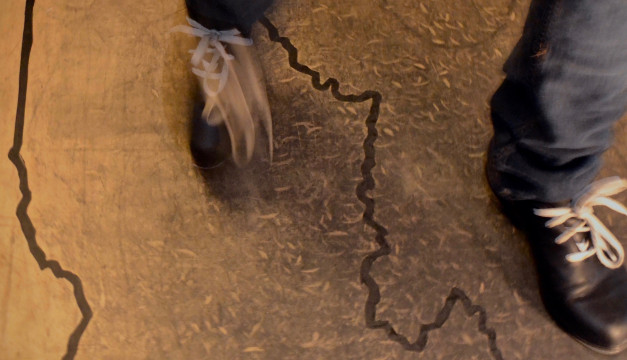 It takes real chutzpah to compare one’s own damped-down problems to the submerged wreckage of the Titanic. Fortunately for us, chutzpah is something interdisciplinary artist Thomas Choinacky has in spades. Fortunately, too, he’s a consummate imp. Choinacky’s focus here is the movie Titanic—more specifically, his obsession with its star—and if you haven’t started giggling by the time he has us praying to Kate Winslet icon candles… well, I don’t want to know you.

Hours later, I ask myself—what was my favorite part? Was it the speed synopsis (58 seconds) of the movie’s entire convoluted plot? The puppet reenactment of the sinking? Or the distillation of the entire film as a kind of Ruth St. Denis interpretive modern dance? I can’t choose, but I can promise you that every single vignette is a huge improvement on James Cameron’s bloated pageant of a movie. Thomas is Titanic is too long; the serious parts don’t really fit in; and the whole thing is a bit of a frenetic mess. And I love every minute of it. 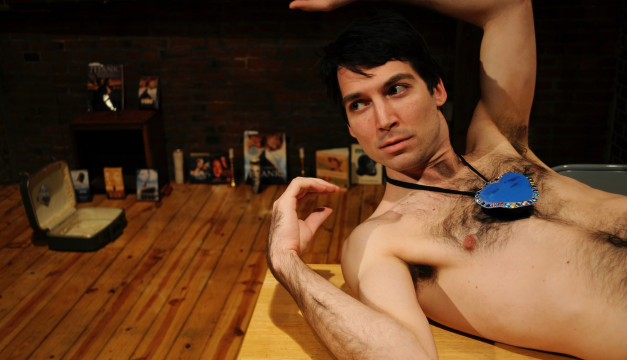 Thomas Is Titanic (from 4SOLO at Simpatico Theatre)

The Best of Me

This power-packed drama is at once the truest play of the group and the most theatrical. The Best of Me is based on the weirder-than-fiction story of Ricardo López, a professional exterminator and wannabe artist, who in the 1990s became obsessed with Icelandic singing icon Björk.

What makes the story uniquely vivid is López’s video diary, much of which is findable on YouTube. The script here, by J Hernandez (who plays López) and Amanda Schoonover (who directs), works from this material to create a disquieting narrative.

Given that The Best of Me is scripted—and that we have an actor playing a character—it’s the most conventionally structured piece here. But there’s nothing conventional about Hernandez’s electrifying performance. He’s a compelling actor with the extraordinary gift of making every moment on stage feel like the first and only time it happens. Hernandez imbues López with a mix of gentle charm and danger that leaves the audience feeling off-kilter. All three plays were enthusiastically received by the audience, but it’s a measure of The Best of Me that initial giggles slowly disappear as an ominous silence descends.

So which of the three did I like best? Impossible to call, really. For charm, polish and ingenuity, I’ll go with Idaho Shuffle. For sublime lunacy, Thomas is Titanic. For gut-punching verve and virtuosic acting, it has to be The Best of Me.

But don’t choose—see them all! (And remember to check the schedule to make sure you know what you’re getting.)