REVIEW: McCarter’s The Age of Innocence Suffers from an Abundance of Good Taste. 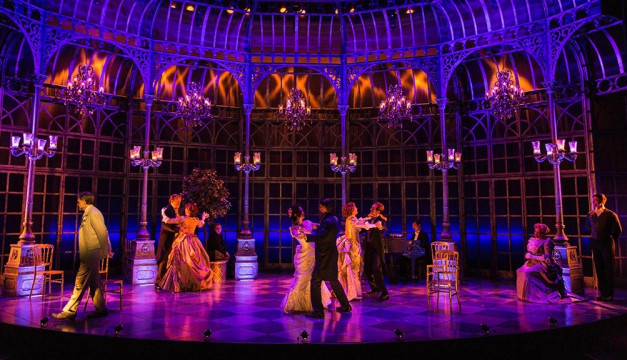 The Age of Innocence at McCarter Theatre Center. (Photo by T. Charles Erickson)

A bell-jar of gentility descends early in the sumptuous adaptation of Edith Wharton’s TheAge of Innocence onstage at McCarter Theatre Center, and for the next 100 minutes, it rarely lets the air in. It’s elegant. It’s lovely. It’s largely inert.

Too bad, because while Wharton’s novel—an American classic—is also supremely elegant, it has both bark and bite, something you wouldn’t know from the neutered reading seen here, written by Douglas McGrath and directed by Doug Hughes, in a co-production with Hartford Stage.

What Wharton so slyly introduces from the get-go is a sense that New York’s Gilded Age (the book is set in the 1870s) was already tarnishing: “… the world of fashion was still content to reassemble every winter in the shabby red and gold boxes of the sociable old Academy. Conservatives cherished it for being small and inconvenient, and thus keeping out the ‘new people’ whom New York was beginning to dread and yet be drawn to.”

This social torque is embodied by the divided loyalties of protagonist Newland Archer, a rising young lawyer, who marries the sweet but feckless May Welland, but soon is obsessed by the glamorous Countess Ellen Olenska, who lives outside bourgeois norms.

This stage adaptation puts that triangulated relationship front and center, while also surrounding it with social interactions (parties, teas, dinners) that allow us to see the larger perspective in all its smallness.

Hughes and McGrath insert the device of a narrator, here called “The Old Gentleman,” who is also Newland’s aged alter-ego. There’s some snap to his initial speeches, which intriguingly sound more wryly contemporary than the dialogue. But soon after, that narration becomes more ordinary, and while it facilitates clear storytelling, it also gives too much focus to plot exposition, pulling us away from the characters’ inner lives, where the emphasis should be.

Even so, Boyd Gaines, a marvelous actor always, imbues his character with a sense of rueful nostalgia. The rest of the company, apart from Darrie Lawrence as a dowager hostess, who gives a delightful sense of zest and period flavor, aren’t in the same class. 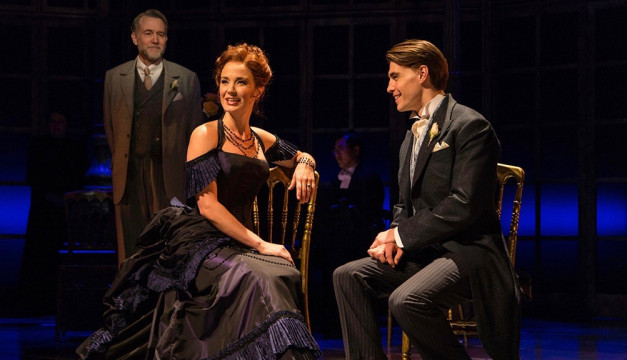 In earnest but flavorless performances, Sierra Boggess (Ellen) and Helen Cespedes (May) seem more like peas in a pod than near-opposites on an emotional and behavioral spectrum, as Newland considers them. Here, they’re similarly willowy and graceful; when each sings a bit of “Beautiful Dreamer”—a clever dramaturgical metaphor meant to underscore their differences—they even sound a bit alike, with their pretty but low-wattage lyric sopranos. Playing the young Newland, Andrew Veenstra is ardent but seems very much a TV-ready hunk. It’s impossible to imagine that he will become Gaines.

There are some beautiful moments in Hughes’ staging, which becomes more compelling as it goes along. It’s a stunning production, gorgeously lit and costumed, which is also right. The audience should experience some romantic longing for this lavish “good life,” thus implicating us also in its narrowness. Onstage pianist Yan Li provides moody, subdued accompaniment.

But McCarter’s Age of Innocence is compromised by its tameness and restraint. What should be an evening throbbing with satire and sensuality instead is undone by an abundance of good taste.

The Age of Innocence plays through October 7. For more information, visit the McCarter Theatre Center website.