REVIEW: In Titus Andronicus, the Son Will Come Out, Tamora

Shakespeare Theatre of New Jersey’s energetic production makes a good case for the play without solving all its problems. 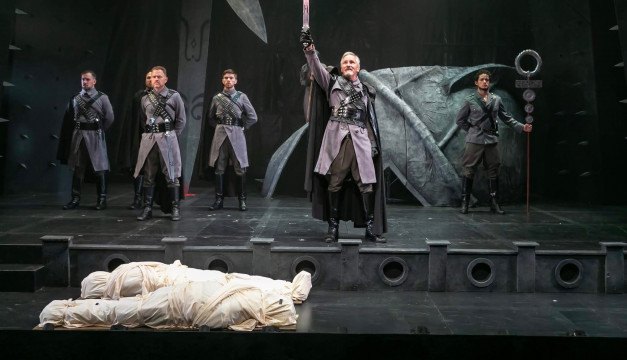 Before heading out on Saturday morning to the Shakespeare Theatre of New Jersey for Titus Andronicus—a play I hadn’t read in decades and had never seen—I thought I’d better do a quick brush-up via Wikipedia. Here’s a sample summary passage: Lavinia writes the names of her attackers in the dirt, using a stick held with her mouth and between her mutilated arms. Meanwhile, Tamora secretly gives birth to a mixed-race child, fathered by Aaron.

And how was your weekend?

Titus, infrequently produced, is generally and sniffingly dismissed as Shakespeare taking the low road, catering to the taste of his audiences, who were then beguiled by a theatrical fad for gore.

Whatever the Bard’s motivation, his play—a fictional chapter of Roman history wherein enemy families and a generational changing of the guard becomes a struggle for power and revenge—is spectacularly gruesome by any standard. Occasional passages glimmer with poetry and insight (it is Shakespeare, after all), and the piece can have a swashbuckling excitement. But the overwhelming impression is its messiness, blood spatter included. And that’s before we get into ruminations about women and race that even the distance of five centuries cannot explain away.

The prim Victorians famously disdained Titus, but the play has gained traction in recent years. Still, how are modern audiences expected to respond to it? Are we, too, supposed to be titillated by its parade of grisly executions? Is it a high-camp folly, presided over by Tamora, Queen of the Goths, a kind of 500-year-old precursor to Cher? Or is there actually something loftier to be divined out of this pile of blood and guts?

And an issue specifically for the director: is there a more difficult moment to pull off in all of theater than Titus, whose daughter Lavinia has just been raped and had her hands chopped off and tongue cut out, gently putting his own dismembered hand in her mouth?

If the director here, Brian B. Crowe, hasn’t solved these problems (nobody could, really), to his credit he’s clearly considered them in a production that acknowledges that Titus has, shall we say, implausible moments, and even funny ones (some likely unintended by Shakespeare, but who knows?). The result is a high-energy, immersive show that clearly delineates the story. The visual mix of periods is effective, with the Goths in particularly projecting a Mad Max-ish edgy glamour. A number of differently stylized design elements are used here to depict the parade of violence; they don’t completely cohere, but they do get the message across.

Anchors among the cast are Bruce Cromer as Titus, a performance that grows in stature and range throughout the show, and Robert Cuccioli, as a dignified Marcus. Cromer and Cuccioli give the show needed gravitas; so does Clark Scott Campbell in the smaller but crucial role of Lucius, one of many sons whose lives will shape the future of the Roman Empire. The entire ensemble contributes with hearty commitment.

In all, a tough-sell play dispatched honorably and even enjoyably. I feel almost guilty saying this, but Titus Andronicus is fun. (Yup, I’m no better than any other blood-thirsty groundling.) The audience applauded lustily, and I joined them in giving Titus, er, a great big hand.