REVIEW: In Frozen — Forgiving the Unforgivable 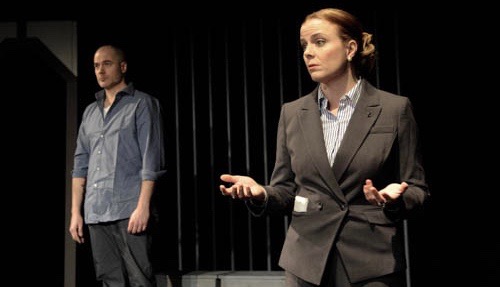 Twenty years ago, Bryony Lavery’s play, Frozen, premiered in Birmingham, soon moving to London’s Royal National Theatre. Subsequently, it made a significant splash on Broadway and in regional theaters here and abroad… and then, seemed almost to vanish. The disappearance involved a protracted legal battle (Google it, if you’re interested), which has since been resolved. Frozen is now back in circulation. (The years between also saw the debut of Disney’s juggernaut musical with the same title. Do not confuse them! — the two could hardly be more different.)

Soberingly, two decades have only served to sharpen aspects of Lavery’s play, a piercingly sad study of murder, family loss, grief, and the healing power of forgiveness. Serial killing is still with us, and likely always will be. And with the world often engulfed in mass rage, we need compassion more than ever. Lavery can be an exceptionally skillful writer, and parts of Frozen — in particular, the climactic conversation between a mother, Nancy, and Ralph, a prisoner who years before killed her daughter, Rhona —  is overwhelming.

In other ways, though, the play hasn’t aged well. Lavery’s tone wavers across a wide spectrum  — intimate emotional drama through melodrama through didactic finger-wagging. Some of the action is tied-up implausibly and too quickly. Lavery inserts an unwelcome note of pamphleteering which dilutes rather than enhances the message. The character of Agneatha, a psychiatrist who is examining Ralph, is half-baked and seems mostly to fill in unnecessary plot details and to serve as Lavery’s mouthpiece.

In any event, the Isis production is earnest, but literally and figuratively too small-scale. The Walnut Studio tiny stage, wonderfully suited to some intimate plays, here squeezes three separate orbits — Nancy’s, Ralph’s, and Agneatha’s — right on top of each other. One concrete example: a moment I remember vividly from the Broadway production involved Nancy’s slow, long walk to meet Ralph in his cell — it seemed to go on forever, producing gasps in the audience. No comparable effect is possible here.

Emotionally, too, this Frozen feels constricted. Renee Richman-Weisband (Nancy) has some lovely and affecting moments, but the long arc doesn’t fully register, and her diligent attempt at what I take to be a Midlands/Birmingham accent is hard to understand. Allen Radway is good at suggesting Ralph’s vulnerability, but the sense of danger is mostly missing. Saddled with the weakest role (Agneatha), Kirsten Quinn most consistently delivers a high-stakes performance, though even she can’t entirely reconcile the character’s odd grab-bag of behaviors.

Next year, Isis Productions will relocate to a new space. I wish they’d held off on Frozen till they could give it more room to expand.  Seen here, though it remains a provocative piece, it misses full resonance.