REVIEW: A Transcendent Ariadne auf Naxos at the Academy of Vocal Arts

A terrific evening of music and theater, and a thrilling affirmation of a magnificent work. 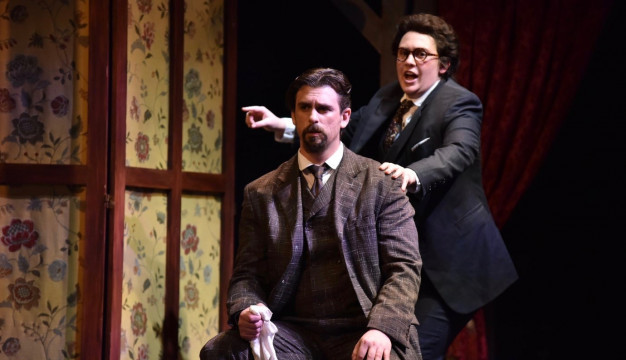 How fortunate we are that Richard Strauss and Hugo von Hofmannsthal’s Ariadne auf Naxos, once thought an oddity among operas, has now become canonical. Recent years have brought more (and more cleverly reimagined) productions in international theaters. Here in Philadelphia, Curtis offered a very fine and intriguingly conceived Ariadne in 2015; now the Academy of Vocal Arts steps up with an equally excellent version that is also quite different.

That’s all to the good: Ariadne contains multitudes. It’s a specialty piece for sure, an ironic layering of two favorite Strauss and Hofmannsthal settings—18th Century Vienna, and Greek mythology—in a droll piece that can be viewed as everything from a satire on the impossibility of making art, to a profound exploration of temporality and transcendence. Musically speaking, to me it’s the greatest of all Strauss and Hofmannsthal’s operas—more economical but every bit as gorgeous as Rosenkavalier or Frau Ohne Schatten.

In fact, I’ll go further—as a combined work of music and literature—as well as a poignant metaphor for a tumultuous period in modern history—Ariadne is the greatest opera of the 20th Century. I think that especially when it works as well as it does here in AVA’s stylish production. Director Dorothy Danner has some ideas that work superbly, including resetting the framing time period to the period of the opera’s composition, between 1912 and 1916. (It helps immeasurably that the specified location—an improvised theater in the house of a wealthy man—almost exact describes AVA’s home.) The prologue is full of marvelous details, and while I wish the opera-within-an-opera weren’t quite such a hodgepodge, it hangs together and makes comic points.

Of course, AVA chose Ariadne in large part as a showcase for their singers, and here too it’s exceptionally well-served, in a cast that was strong across the board, and often genuinely distinguished.

Two singers impressed especially, as they had in AVA’s recent Das Rheingold. Hannah Ludwig’s fulsome mezzo-soprano was gloriously potent in the Composer’s ardent music, even if the very highest notes call for more float (it’s really a soprano role). Ludwig also projected the text with transcribe-able clarity. (Most of the cast need additional coaching on their German, with the “ich” and “isch” sounds particularly tricky.) Baritone Timothy Renner was theatrically and vocally a commanding, polished Music Master. 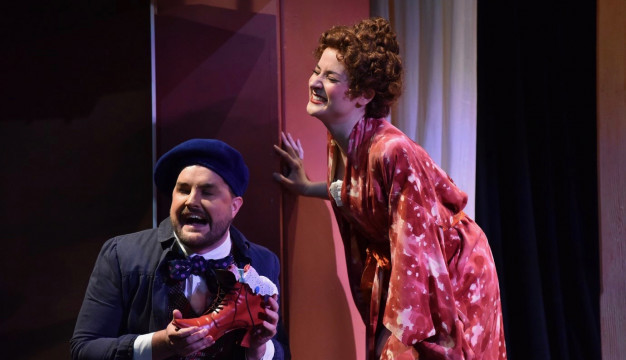 Claire de Monteil’s Ariadne needs more bite in her projection of the words, but her beautifully rounded, voluminous soprano made some gorgeous sounds, especially launching quiet, high-lying phrases. Alexandra Nowakowski (Zerbinetta) has a lovely lyric soprano with the top notes and flexibility this fiendishly difficult role requires; she’s also an engaging actress. Her ascending trills were a bit oddly phrased (but they were genuine trills—brava!), and more often she shaped the line very gracefully.

Bacchus is a famously difficult role, nearly impossible to make graceful either vocally or theatrically—but John Matthew Myers brought considerable power and ring to the line, coped with its fearsomely high attacks, and found more dynamic variety than many famous tenors have. Daniel Gallegos was a charming Harlekin, ably assisted by his team of comedians. Among the singers in the glorious Nymph trio, we had two sopranos (Meryl Dominguez and Alexandra Razskazoff) who had played Rhinemaidens last month—resonant casting, as Strauss and Hofmannsthal almost certainly meant these characters as a wink to Wagner. Together, the three (including mezzo Gabriela Flores) were as strong as any I’ve heard in performance. (Dominguez takes on Zerbinetta at some future performances—judging from her lovely melismatic filigree work here, that will be a treat.) Guest conductor David Aronson molded an elegantly-shaped performance with notably translucent playing from the strings and winds.

In all, a terrific evening of music and theater, and a thrilling affirmation of a magnificent work.