THEATER REVIEW: Bucks County Playhouse’s Guys and Dolls is a Show to Love a Bushel and a Peck

A very enjoyable take on an American masterpiece that only improves with time. 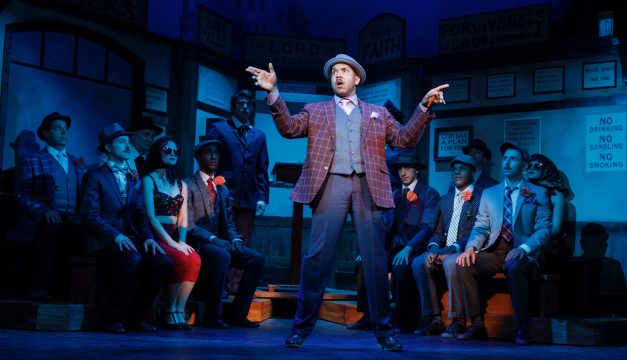 Any opportunity to see Guys and Dolls—near the top of the top among American musicals—is a treat, and I especially looked forward to it at Bucks County Playhouse. It’s an ideally intimate venue, as well as one rich in history and atmosphere. The cast has many terrific performers (BCP does very well with casting in general). Most of all, the director is Hunter Foster, Artistic Associate here, who two summers ago led an exceptionally intriguing version of Stephen Sondheim’s Company.

Foster’s Guys and Dolls, always enjoyable, has many good things and at least one sensational one. Darius de Haas, a delightfully winning Nicely-Nicely, delivers his 11 o’clock number, the rafter-raising Sit Down, You’re Rockin’ the Boat, with effortless charm, musicality, and a gorgeous voice. It brings down the house, as well it should.

If Foster’s approach in Company was to rethink that show in sometimes revelatory ways, here he’s more traditional. There’s much to admire in that, too—despite tinges of seriousness (My Time of Day, a fascinating, fragmentary piece that defines mournful outsider-ness), Guys and Dolls mostly is traditional musical comedy at its best. Foster trusts the old vaudeville business and one-liners (lots of still-funny jokes in Jo Swerling and Abe Burrow’s book, and of course in Frank Loesser’s lyrics), and he paints gangland New York with bold good humor. It’s full of movement and energy, sometimes too much so, and occasionally crude. But Foster also has a real way with actors, and a notable feature here (as in his Company) is the almost imperceptible way speech turns into song. 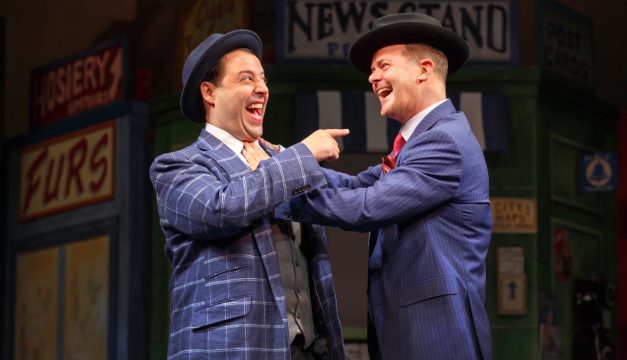 Among the performers, along with de Haas, I give high points to Steve Rosen, a lovable Nathan Detroit, who almost justifies Adelaide’s willingness to wait for him. Rosen has complete mastery of the Borscht Belt style needed here, and genuinely sings the role as few others have. His Adelaide, Lesli Margherita, has plenty of star power and a terrific voice, but too often she goes overboard. Her best moment is her most restrained—playing it straight in the reprise of Adelaide’s Lament, Margherita is everything you could wish for.

As the central couple, Clarke Thorell is a sexy but understated Sky Masterson; his intimate manner and vocal style suggest a ‘50s male crooner, which is not at all inappropriate (one of cinema’s great oddities is that Frank Sinatra—born to play Sky—ended up in the Guys and Dolls movie as Nathan!) Thorell makes a slightly odd pair with the Sarah Brown of Elena Shaddow, whose big soprano and somewhat stock characterization feels more rooted in operetta, but the two find a connection.

Choreography is ambitious and well-delivered, and the scenic designs are attractive and work well for multiple locations. (Again, the stage world evoked is aptly theatrical old-school.) 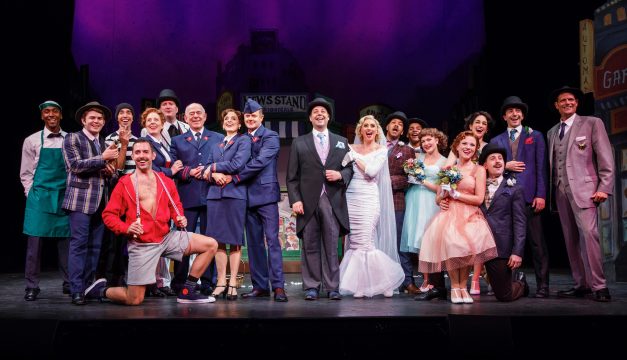 The Cast of Guys and Dolls at Bucks County Playhouse. (Photo by Joan Marcus)

But to take nothing away from Foster, de Haas and company, the real star here is Guys and Dolls, a magnificent show with equal parts sentiment and sly fun, that only gets better with age. Frank Loesser’s score starts on a high (Fugue for Tinhorns) and stays there, and you’ll find no better comic lyrics anywhere. Before you go see Guys and Dolls at Bucks County Playhouse—as you really should—do yourselves a favor and look up what “Hollanderizing” is. You’ll laugh even  harder.