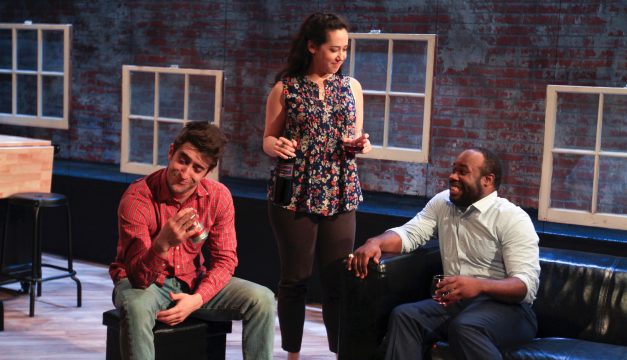 Location, location, location—it’s America’s real estate mantra. And with it comes the usual advice that the smartest and safest bet for new buyers is to choose a modest house in a good neighborhood. But there are always the pioneers—people who instead go for the fabulous property in an iffy area, hoping they’re at the start of an upswing.

The high-stakes, social-status-transforming metaphors of home ownership are so powerful, so connected to the American Dream, that it’s no wonder it’s a favorite motif in theater. Tracey Scott Wilson’s punchy, gripping Buzzer riffs on it in clever and unexpected ways. The pioneer here, Jackson (Akeem Davis) is a black man with a blue-chip education—he’s moving back to his old neighborhood, which is every bit as fraught as it sounds. Maybe a little bit selfish, too—for Jackson’s white girlfriend, Suzy (Alex Keiper), walking through the neighborhood is daily blitz of cat calls. And moving in with them as a semi-permanent houseguest is Don (Matteo Scammell), who should have been the success story in the group (he’s white and privileged), but drug addiction has destroyed much of his potential.

Three adults, living together in close quarters—perhaps you’ve detected another favorite American theater genre, the Triangle Play. Wilson deftly weaves the strands together, and we come to understand that the tensions rising from the personal relationships are of a piece with the problems of living in a neighborhood that isn’t gentrifying fast enough. Both themes are rooted in questions of identity and connections; and both involve extraordinary pressure on Jackson, Suzy, and Don—to a degree that survival is an open question.

Wilson writes in powerful, short scenes that have a way of starting and ending in surprising ways. She’s a masterful storyteller, and if the basic issues in Buzzer are familiar, they feel fresh and urgent here. Director Matt Pfeiffer’s production is high energy and beautifully fluid, and all three actors give very fine performances that never feel like performances. Thom Weaver’s terrific set, with windows floating in front of a brick wall, is (like the play itself) both realistic and abstract.

Buzzer is precisely the kind of detailed, contemporary, edgy work that is a Theatre Exile specialty—and is shows the company is at its considerable best.

Buzzer plays through May 28. For more information, visit the Theatre Exile website.