HughE Dillon’s Best Snaps from “The Scene” in 2013

2013 was a year for giving, young friends, puppy love and celebs. 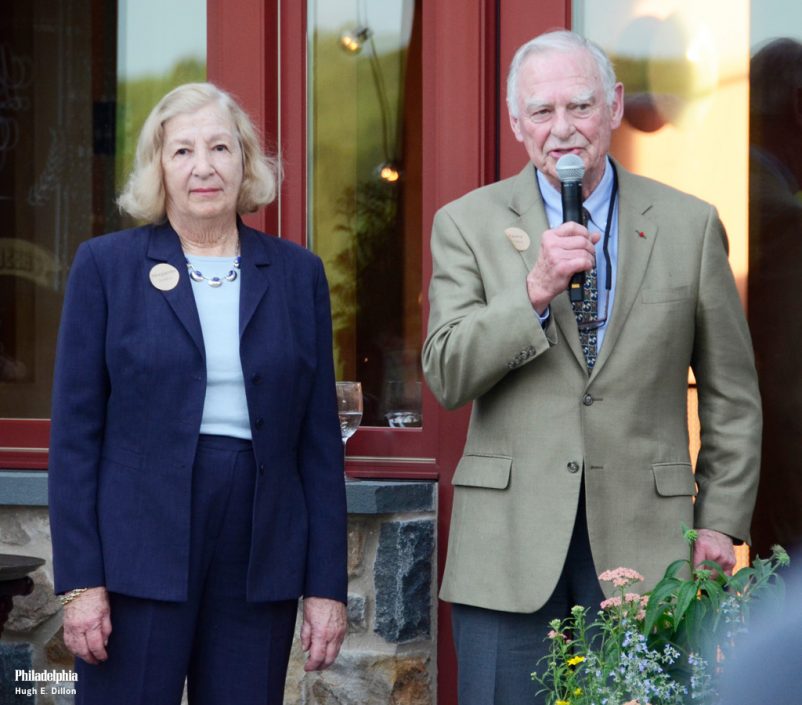 2013 was a giving year for so many. Here are Marguerite Lenfest and Gerry Lenfest at the dedication of The Lenfest Center Opening at ChesLen Preserve in the spring. 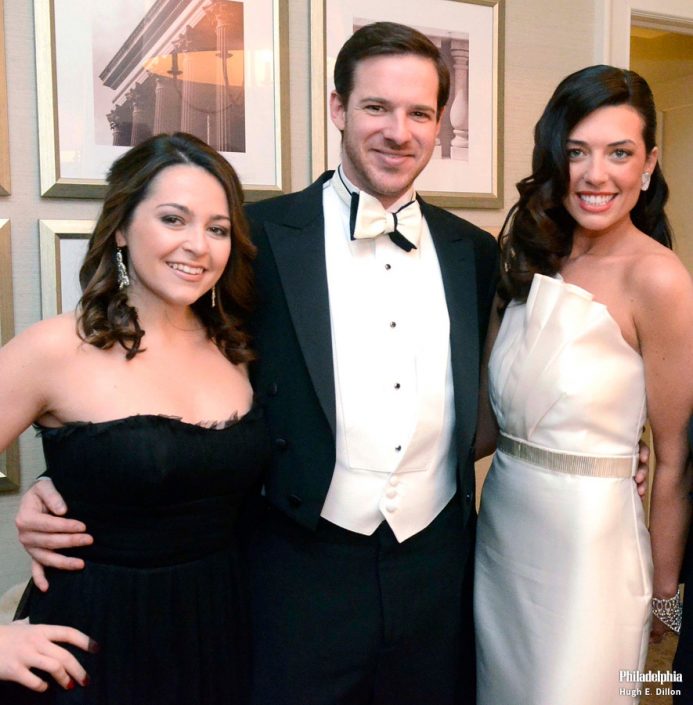 It seemed like young friends organizations were being organized for every institution in the city. It's a great way to ensure an institution's future, as well as get the next generation interested in arts, culture and philanthropy. From left: Marisa Magnatta, Brian Lipstein and Christie Honigman at the Young Friends of the 2013 Academy Ball pre-concert party. This year Jill Scott is scheduled to perform at Academy Concert and Ball on January 25th. It was just announced that The Bacon Brothers will perform in the Grand Ballroom at the Bellevue during dinner at the Ball. 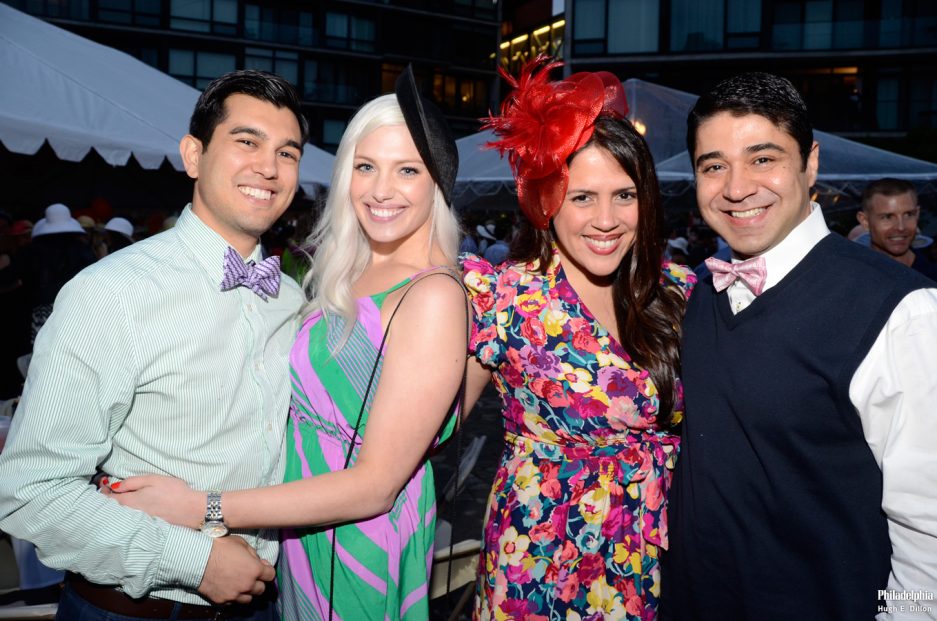 The inaugural Preakness at the Piazza debuted on May 18th, benefiting multiple sclerosis. In 2014, mark May 17th on your calendar for the second annual. From left: Kevin Sierra, Chris Lydon, Linda Arceo and Javier Arceo. 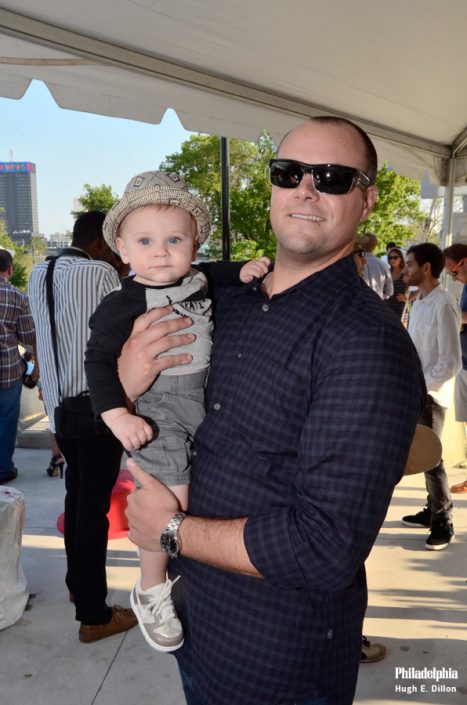 Jesse Rendell and son Dean at the opening of Franklin's Paine Park, the skate park near the Art Museum. As a teenager, Jesse had a dream of a safe skateboard park where he and his friends could go. A decade later, with lots of sweat equity and funds, it happened. 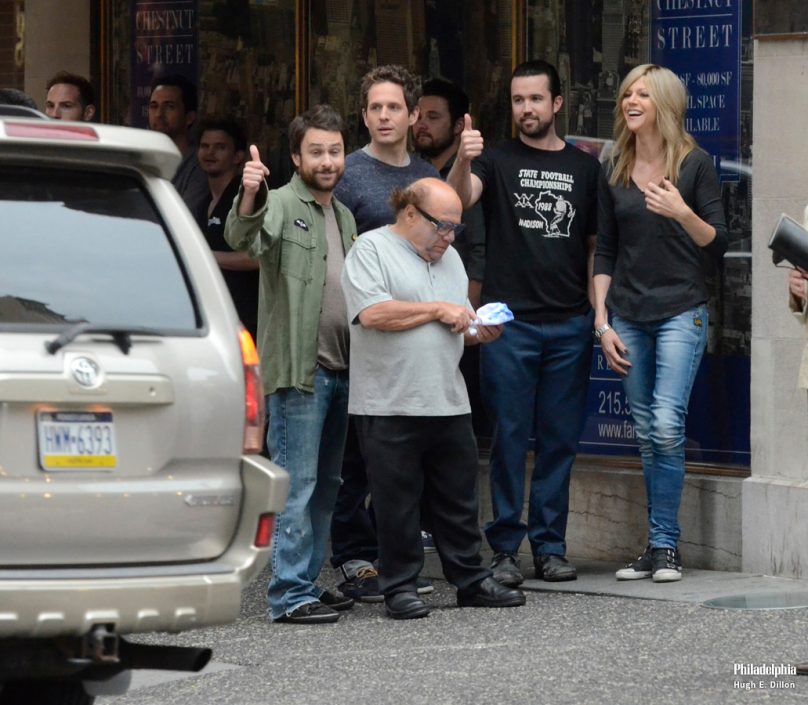 We had our share of celebrities in town, like the cast of It's Always Sunny in Philadelphia, filming at 17th and Chestnut streets. Richard Gere filmed Franny in the fall, and next year look for Hot Wheels in the spring. 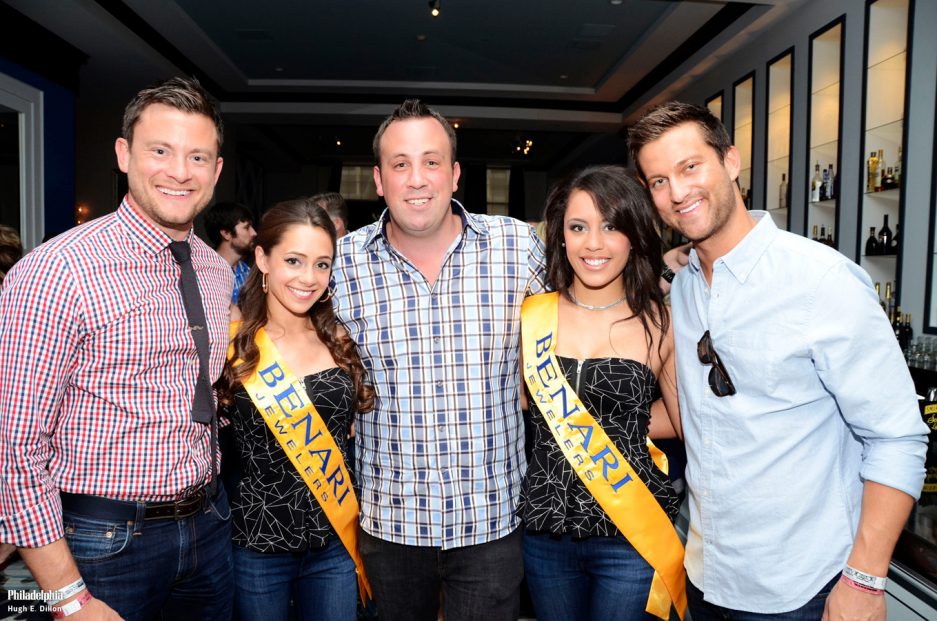 6ABC Bachelor contestants Frank Neuschaefer, Craig Robinson and Chris Bukowski with Wilheminia Models at the Hamels Foundation Diamond & Denim gala held every August. This particular evening was difficult as their cast-mate Gia Allemand committed suicide earlier in the week. Recently I introduced Craig to the organizers of a charity I volunteer for, The American Foundation for Suicide Prevention (AFSP). On Friday, the cast of The Bachelor hosted a fundraiser in New York and raised $12,000 for the organization. In 2014, they'll raise even more, but I'm not allowed to talk about it… yet. 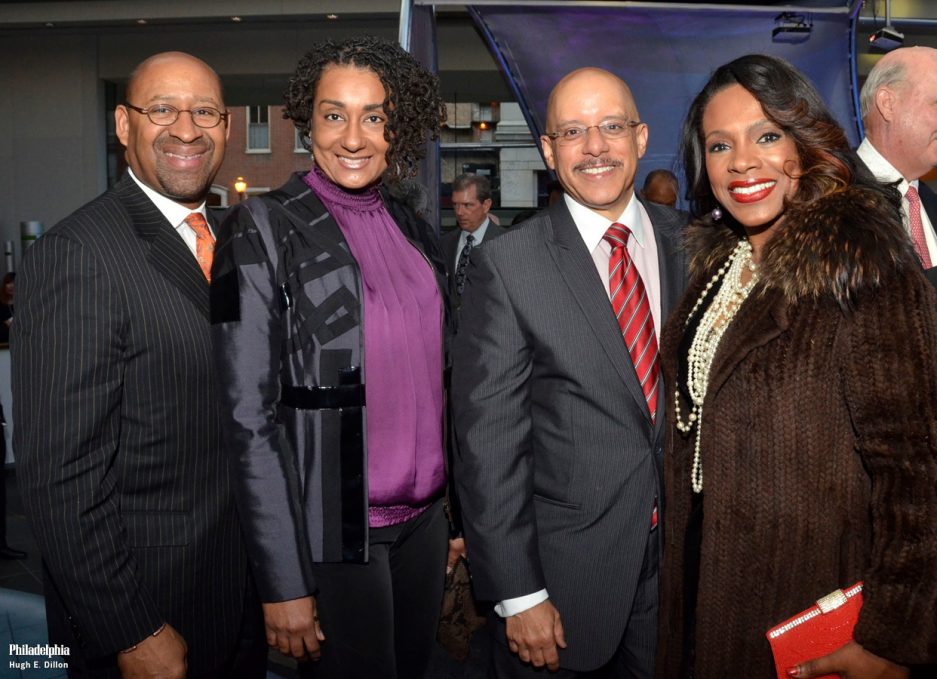 The Philadelphia International Festival of the Arts held its biennial celebration of the arts on April 3. The opening gala was spectacular, drawing a who's-who of the arts, political and the philanthropic worlds. Mayor Michael Nutter, First Lady of Philadelphia Lisa Nutter, State Sen. Vincent Hughes and his beautiful wife, actress Sheryl Lee Ralph. 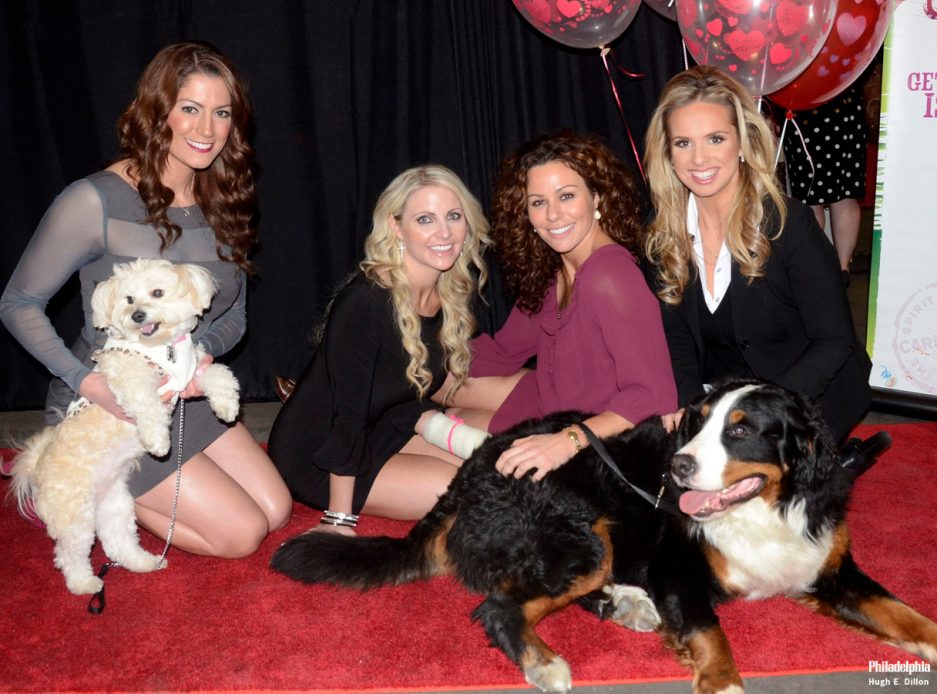 Smokin' Betty's and Devil's Alley hosted the Puppy Love Valentine's Party to raise money for the Pennsylvania Society for the Prevention of Cruelty to Animals (PSPCA). From left: Angela Perfetto with Livy (Pomeranian-bichon), Julie Dorenbos, Susie Celek with her Bernese mountain dog, Bruiser, and Maria Papadakis. No word on whether this is happening again, and it was such a fun event too. 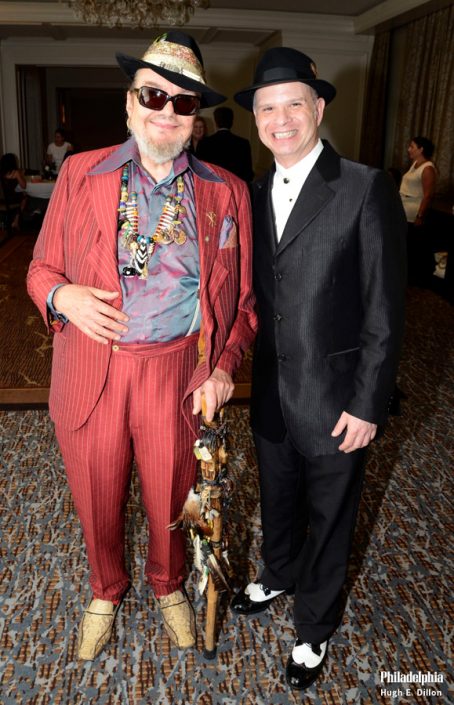 The Voice Foundation held its annual gala in June and honored New Orleans music legend and Rock and Roll Hall of Fame inductee Dr. John with the Raymond and Beverly Sackler Award. With him is professional tap dancer David Pershica. David's latest project is the new non-profit organization After School Musical, which provides arts programming for Philadelphia High School students who don't have performing arts programming in their schools. In May, nearly 170 students will be participating in the musical Hairspray at the Paul Robeson High School. Look for fundraising opportunities to help see this to fruition. 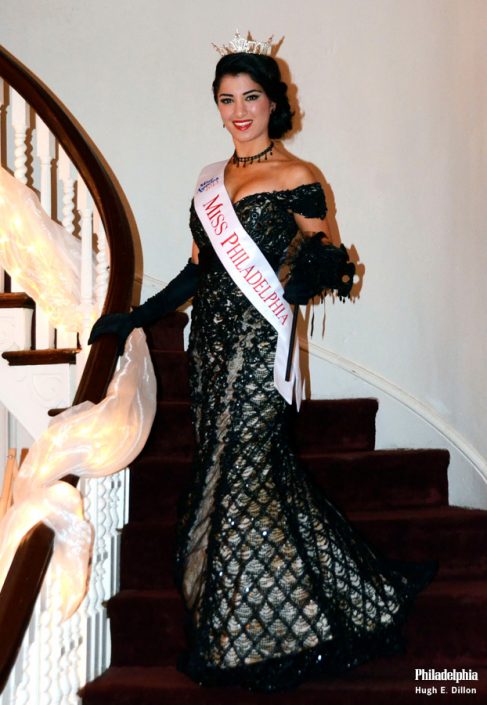 Miss Philadelphia 2013 Francesca Ruscio has made quite a fashionable splash on the social and philanthropic scene. Her reign ends in March, at which time she will be gearing up for the Miss Pennsylvania Scholarship Pageant held in June. She's photographed here at the Young Friends of the Kelly Anne Dolan Memorial Fund in November. 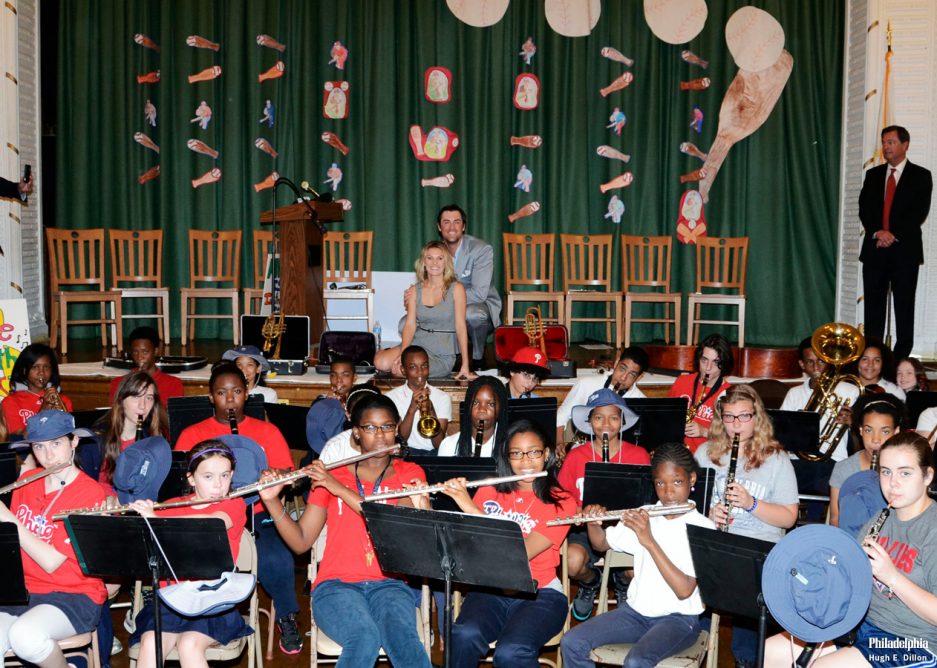 Cole and Heidi Hamels of The Hamels Foundation at Shawmont school after the school received $30,000 for new instruments for its band, which played "Don't Stop Believin'" by Journey at the ceremony in June. 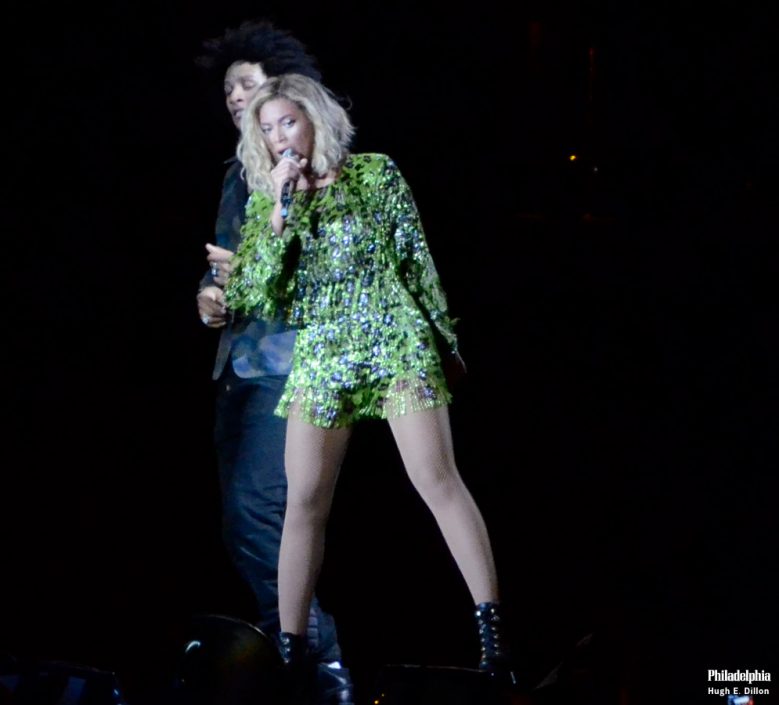 Look for Jay Z's Made in America to return to Philadelphia in September. Could there be a repeat performance by his wife, Beyonce, now that she has a new CD out? 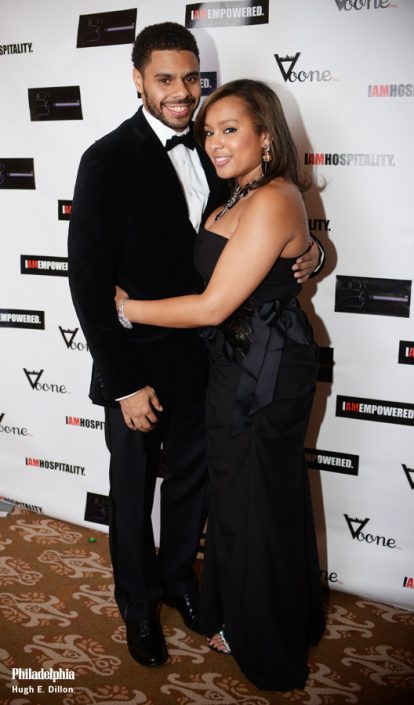 The inaugural Pattison Leader Ball excites me. Co-founded by Kellan White and his fiance, Nicole Allen, they created the organization to increase civic engagement among their generation. I met a lot of young people who had public service in their future plans. Happy New Year, and thanks for letting me into your lives.