Developer Odin Properties turned an apartment building gutted in a fire four years ago into attractive apartments within reach of the average Joe and Jane. 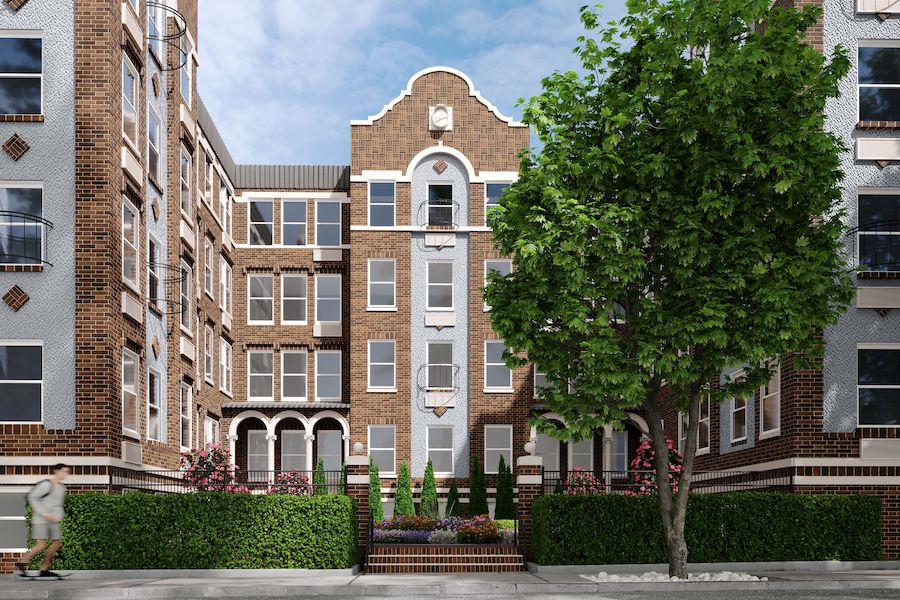 The restored Overbrook Lofts apartment building, shown here in a rendering, looks even better now than it did when it first opened in 1926. Its owners aren’t the only people who are happy about this development: The neighbors and tenants like it, too. / This rendering: ArchiCGI; interior photos: Odin Properties; other photos as noted

What you won’t find at the new Overbrook Lofts apartments in Overbrook:

A clubhouse with a bar and coffee service.

A demonstration kitchen and dining room.

A swimming pool. A yoga studio. A game room. A media lounge. Or a co-working space with a conference room.

Then again, the would-be tenants who came by to check out the restored apartment building the day developer Odin Properties cut the ribbon on September 26th weren’t looking for any of those things. 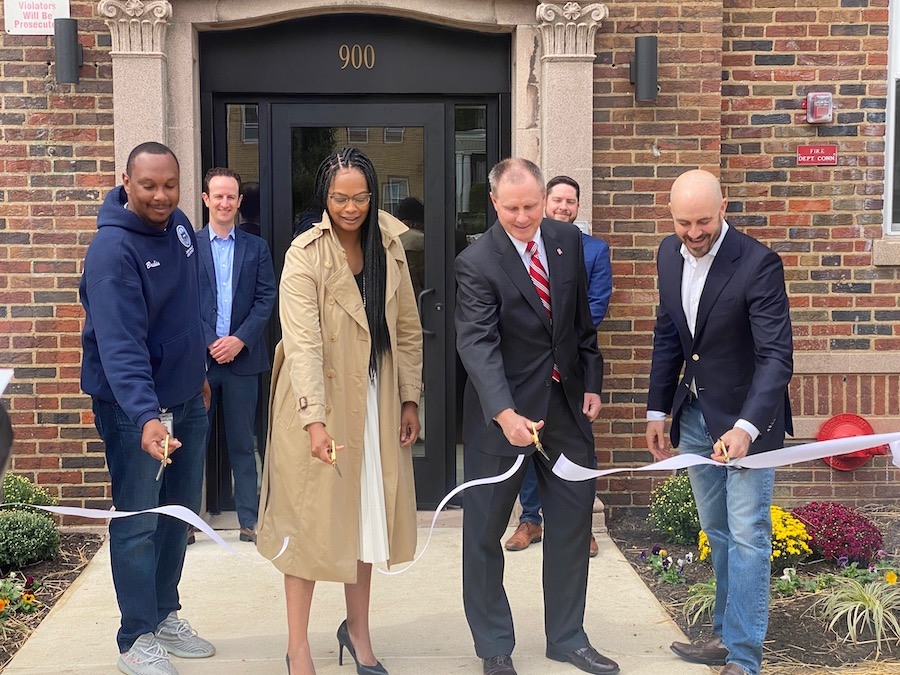 They were looking for decent housing they could afford. And Overbrook Lofts has that in spades.

Providing homes working folks can afford is Odin’s stock in trade, and it does this by identifying buildings that, with a judicious application of money, can be turned into reasonably priced housing.

In investor-speak, the company says on its website that it was founded in 2009 to “identify and acquire under-performing real estate assets in the Eastern United States and transform them to realize long-term value for [their] tenants, neighborhood stakeholders and investors.” 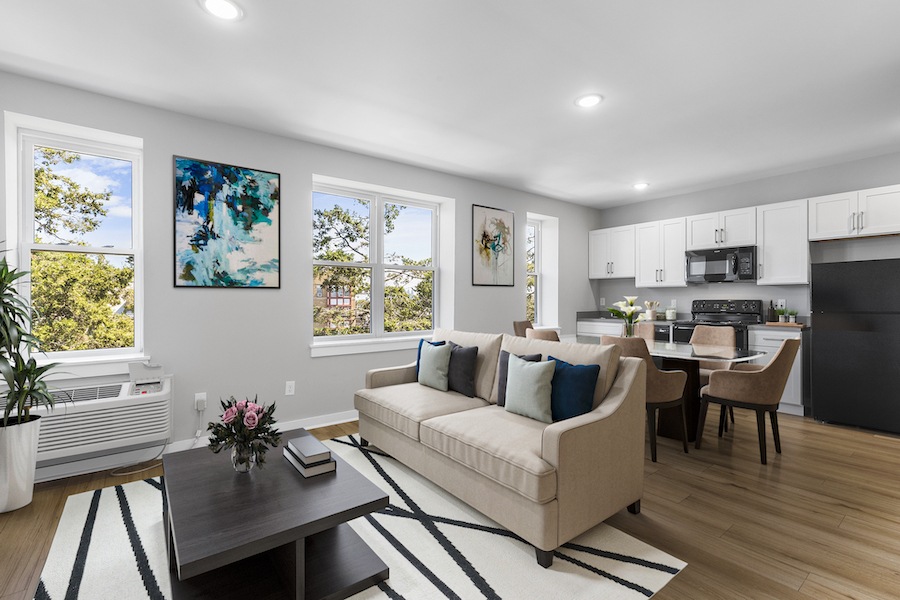 The living room of the model apartment at Overbrook Lofts

Note the first two parties listed in that statement. As often as not, the tenants and neighbors get cut out of the value-creation equation. But this company considers them just as worthy of “realizing long-term value” through being able to afford a decent place to live.

In the world of social impact investing, this is usually referred to as the “triple bottom line.” And while Odin Properties founder and CEO Philip Balderston doesn’t use that phrase to describe how it invests money, it’s clear that Odin defines its mission in similar terms.

Take this building, for instance. It’s hard to imagine a more underperforming asset than a building that had been gutted in a 2018 fire. The ruins of the 1926 Overbrook Gardens apartment building had been sitting at the corner of 63rd and Jefferson streets for two years when Odin ran across it.

“I think it had really terrific character, even though it was badly damaged by fire and had been vacant for a couple of years,” says Balderston. “It was clear when we first toured it that it was really something special and that it could be brought back with a little TLC.” 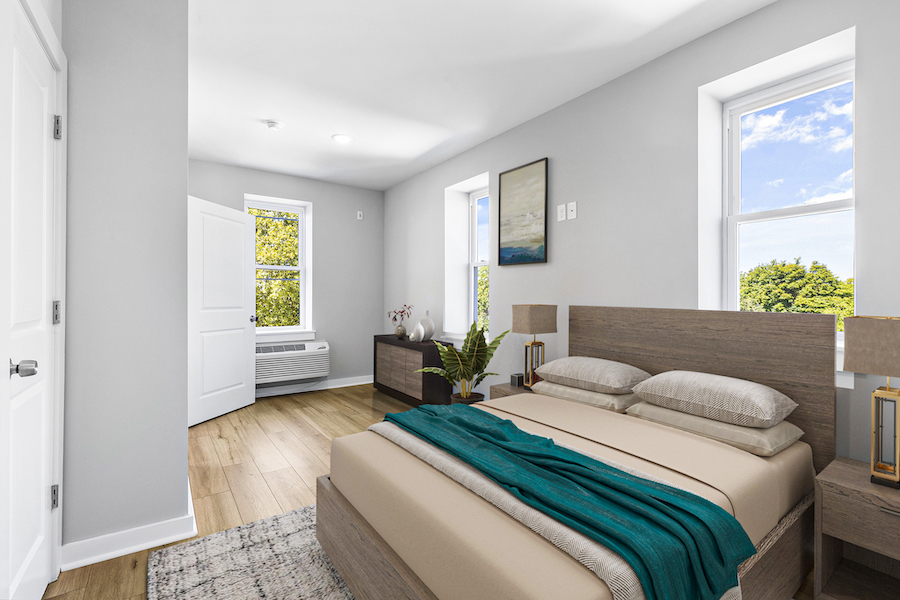 Actually, it took a little more than “a little TLC” to restore this building. Its interiors had been severely damaged in the fire, its roof was gone, most of its steel frame had to be replaced and a good chunk of the exterior brick work had to be rebuilt. Fixing all that damage took several months. “But once we got done with that, the inside was a little easier,” says Balderston.

As the photos of the model units should make clear, Odin didn’t rebuild this building on the cheap. The apartments are solidly constructed, with high-quality kitchens and bathrooms. Odin saved money by not larding the building with the kinds of amenities many new complexes have — those clubhouses, pools, game rooms and so on.

“We were able to make it relatively affordable by not over-amenitizing it for its location,” Balderston says. “We don’t need a rooftop pool for an apartment building. For us, it’s more important that we deliver units at the right price than that we have a rooftop pool.” (The building will, however, have fitness equipment in a common room near its lower-level laundry room.) 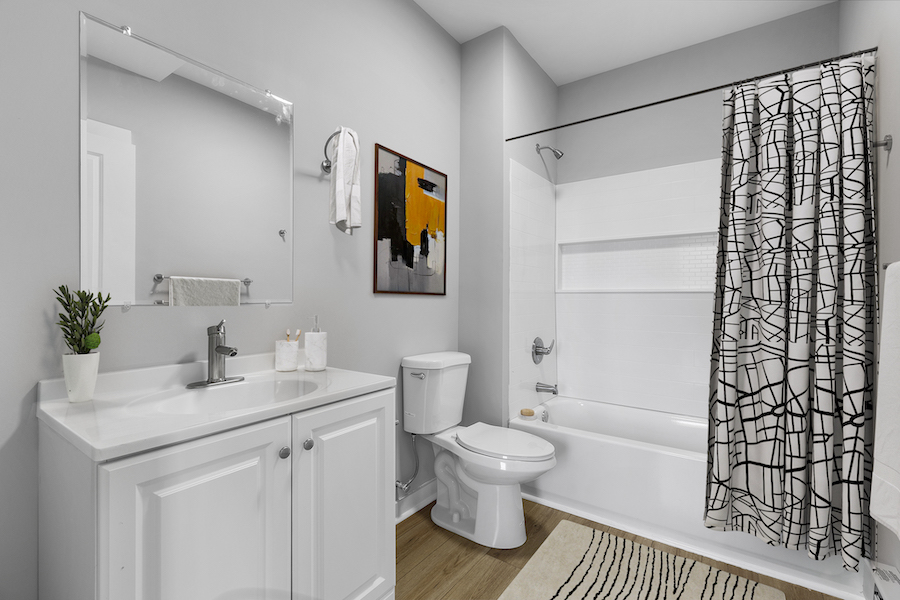 And even though this building is close to St. Joseph’s University, Balderston also says that he doesn’t expect to see many students moving into it. Instead, its residents will come mainly from its neighborhood. “I would say the building is workforce housing,” he explains. “We expect the majority of our renters will be people who are from that neighborhood and want to stay there. They may work downtown, they may work at the Navy Yard, they may work in University City, but they’re from Overbrook, from West Philadelphia, and they want to stay there.”

This, then, is a textbook example of the way Odin “realizes long-term value for tenants, neighborhood stakeholders and investors.” The tenants get great apartments they can afford. The neighbors get an eyesore returned to its former glory. And the investors, of course, make money off all this.

And not a cent of public money went into making any of this happen — not even tax credits. (Of course, the restoration qualified for the city’s 10-year property tax abatement.)

That means that Odin also created value for the public purse as well.

Overbrook Lofts is Odin’s fifth apartment development in its hometown of Philadelphia; four more projects are in the pipeline. The company manages about 10,000 apartments and 200,000 square feet of commercial space in 15 states.

Overbrook Lofts by the Numbers

Number of parking spaces:  None. 23 bike parking spaces are available in the lower-level common room, and SEPTA’s Route 10 trolley stops directly in front of the building.

Updated Oct. 18th, 9:44 p.m., to correct the name of the neighborhood where Overbrook Lofts is located.