This updated vintage rowhouse has loads of original detail and eclectic charm. And wait till you see the backyard. 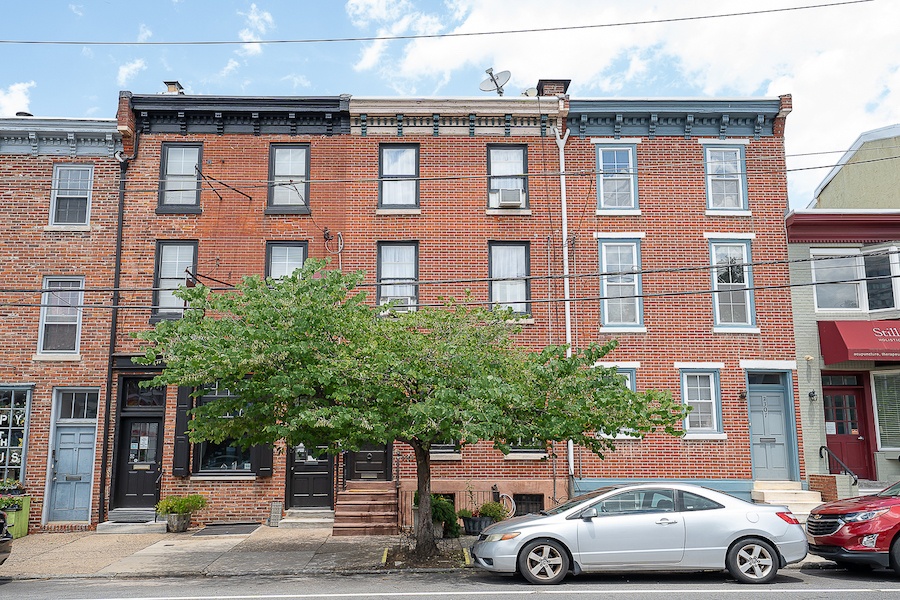 Terry Berch McNally and her ex-husband chef-partner Michael shuttered the London Grill three years ago. Now she’s also ready to move on to the next stage of her life. But she leaves a distinctive memento of her years here in the form of this one-of-a-kind vintage-yet-modern townhouse at 2309 Fairmount Ave., Philadelphia, PA 19130 | Photos: Dave Oceanas via Compass

There are many Fairmount denizens, not to mention folks who live outside it, who still lament the demise of the London Grill at 23rd Street and Fairmount Avenue. They loved its classic 19th-century decor, outstanding beer list, accessible fare and outgoing owner, Terry Berch McNally.

If you wonder where she got the inspiration for the restaurant’s look and feel, wonder no more, for clearly, it was an extension of her own personality. That much becomes clear when you see what she did with her own home three doors down the street.

Her Fairmount Avenue townhouse for sale has that same combination of authentic 19th-century charm and modern sensibility. And it has a backyard to die for.

But before we get to that spectacular backyard, let’s take a look at the rest of the house, for it’s quite nice as well.

Living in Fairmount: A Neighborhood Guide 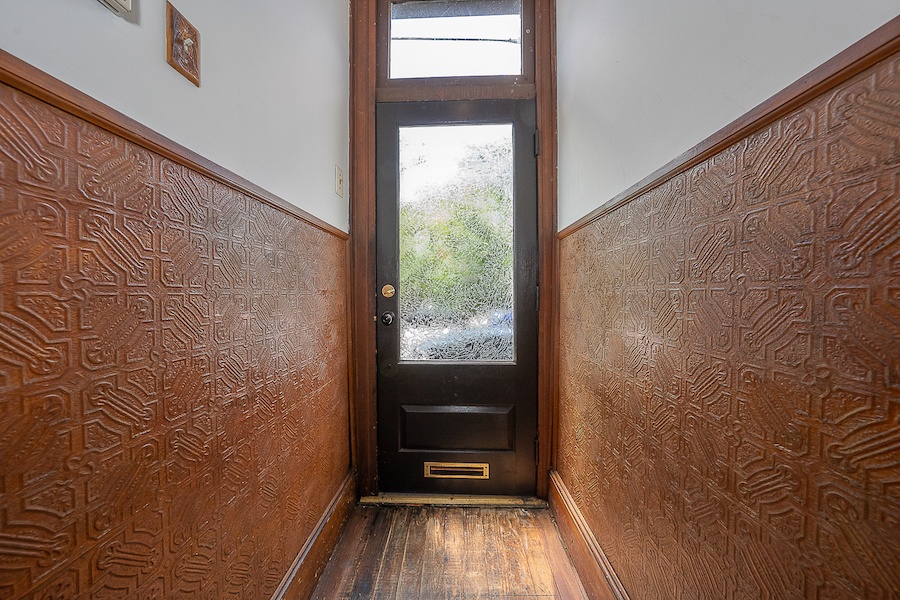 You enter it via a vestibule lined with Lincrusta wainscoting. That tells you immediately that McNally is serious about her Victorian authenticity, for the company was founded in Britain in 1877, at the height of the Victorian era. 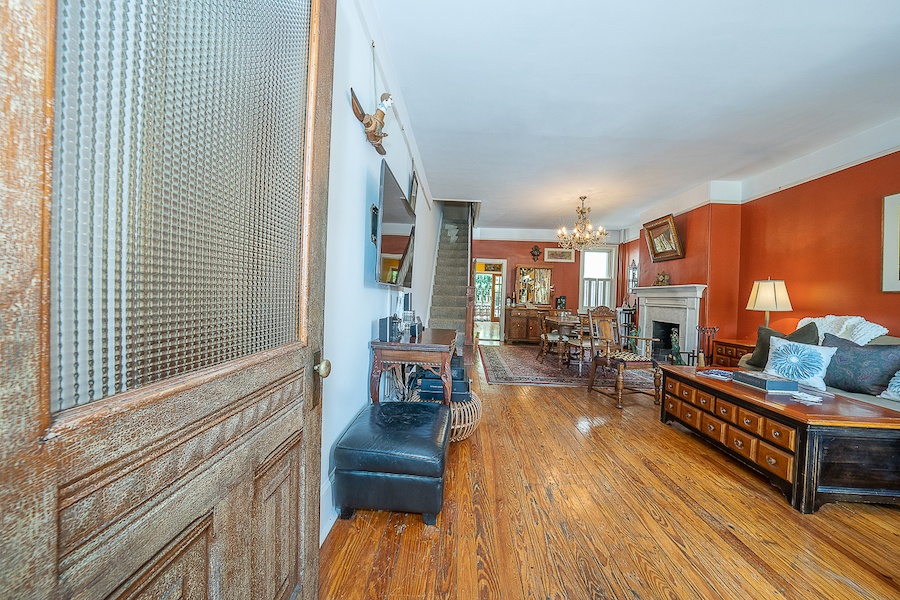 The main living area is just as authentically 19th-century in its appearance — but it’s clearly modern in its open plan. 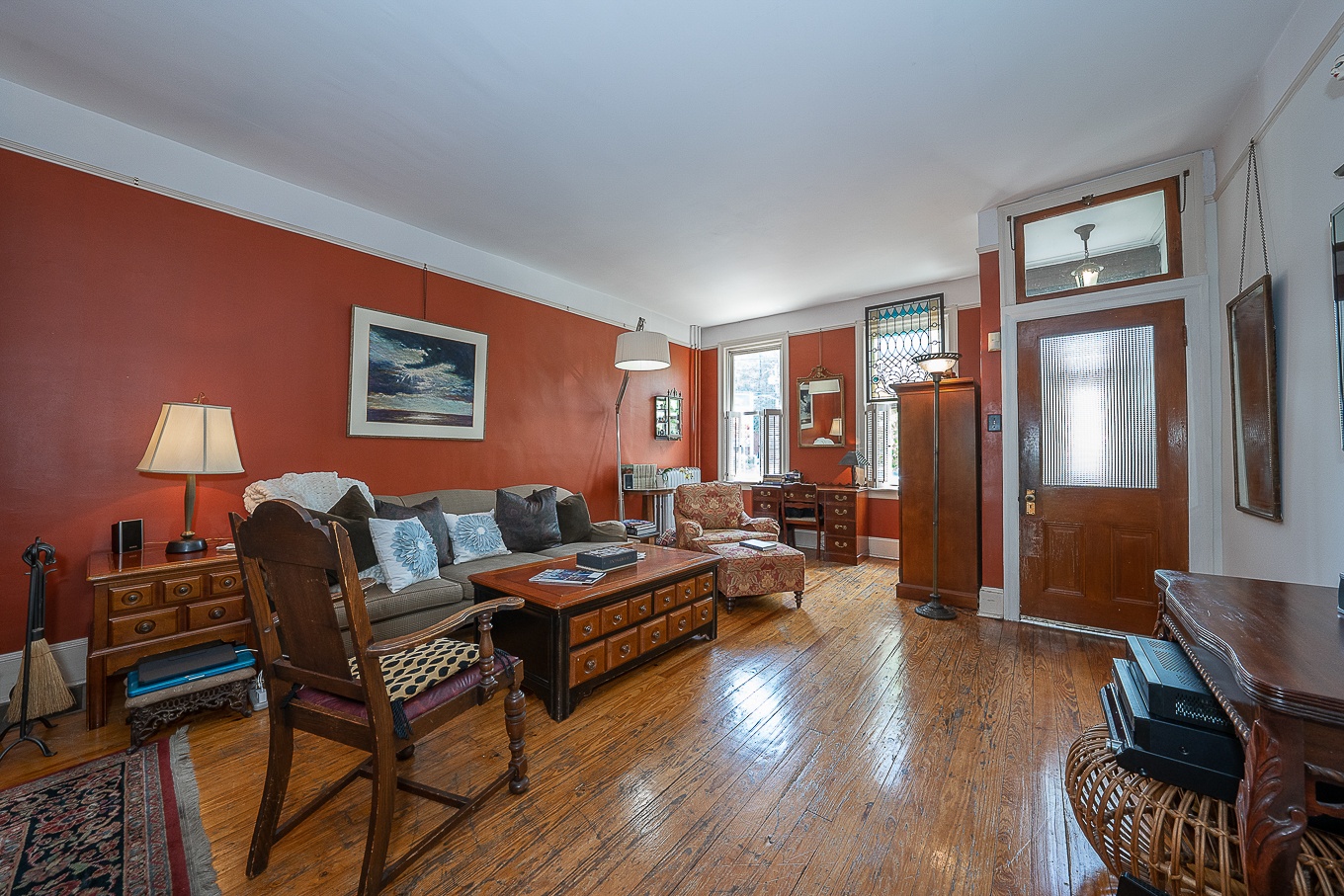 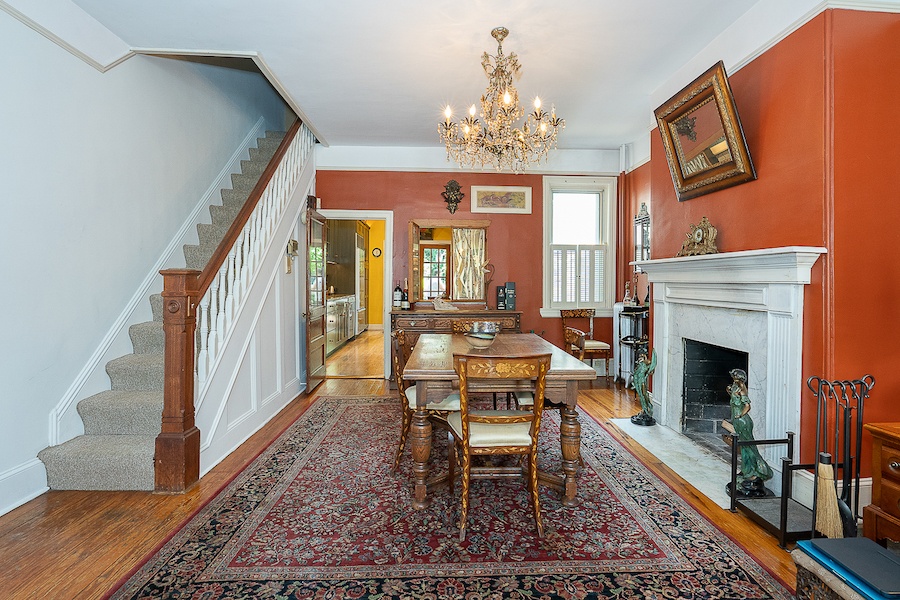 And the dining area in back has a wood-burning fireplace. Its marble mantel and the pine floor beneath everything are both original to this house. 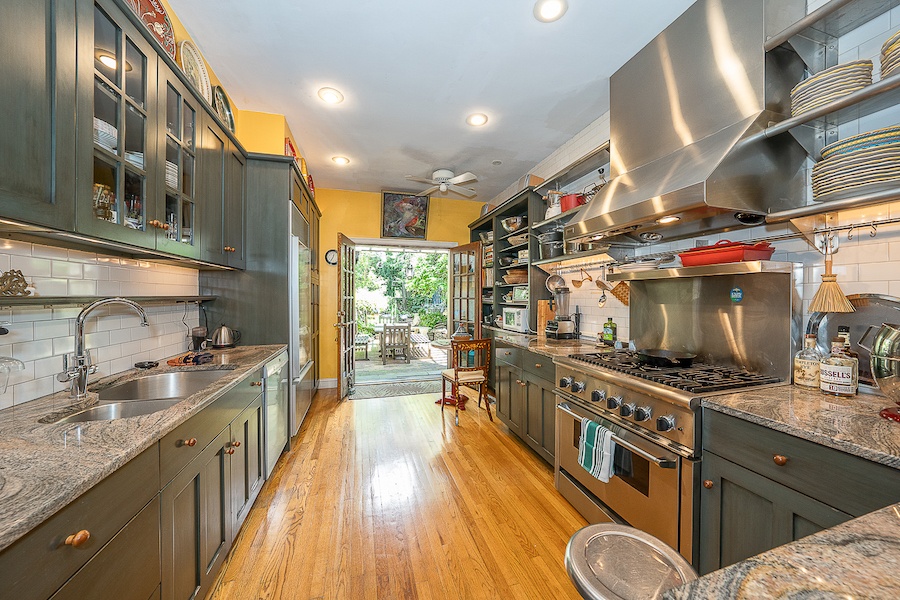 The kitchen, on the other hand, is clearly a modern update. Here you see the likely influence of McNally’s former husband, London Grill chef and co-owner Michael McNally, at work: The steel shelves, six-burner commercial gas range and fume hood, and loads of granite-topped counter space (with a pass-through window to the dining area) all reflect the choices of a pro leavened with the design sensibility of a residential designer. Yet the cabinetry maintains continuity with the past. 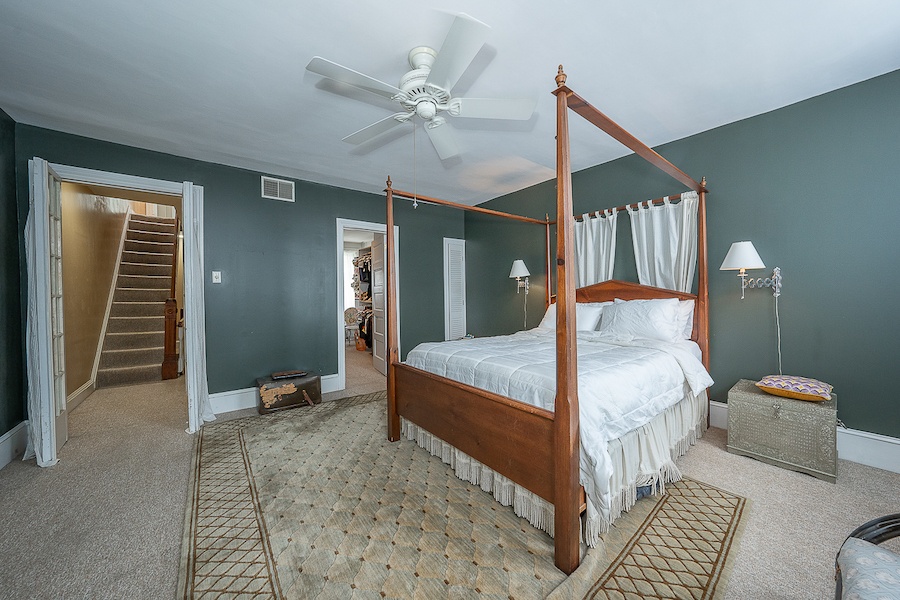 The primary suite takes up the entire second floor. The bedroom is in front, and it also has large windows that let natural light pour in. Given that this house sits on the north side of the street, and Fairmount Avenue is wide, the front-facing rooms get plenty of sunshine year round. (Keep that mind if you’re the sort who likes to hang plants in the windows — though after you see the backyard, you may not feel the need to.) 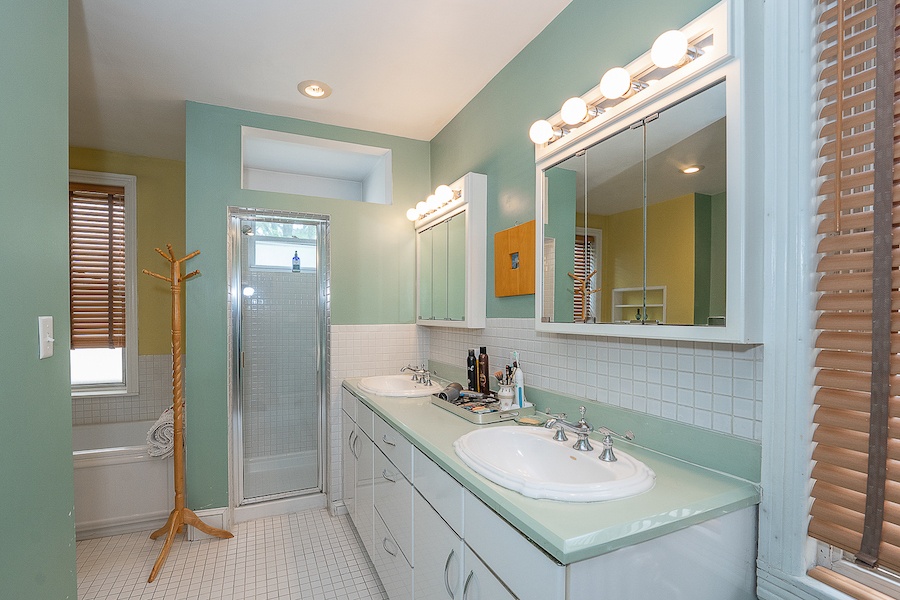 It also has a huge walk-in closet and a two-room primary bathroom. The part next to the bedroom has a double vanity with dressing-room mirrors and a stall shower that are totally mid-century in style. 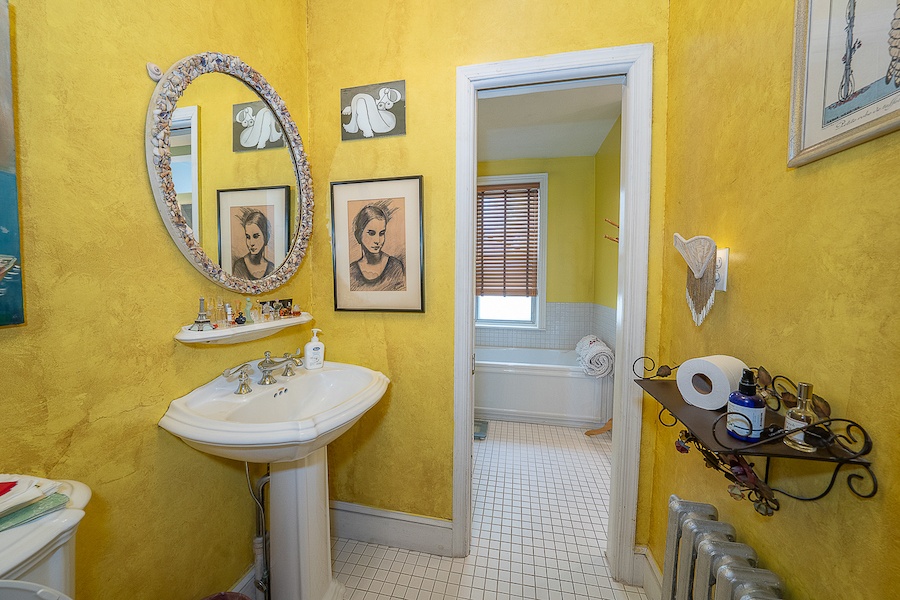 Next to the shower stall is a bright yellow space where you will find a Jacuzzi tub. A door leads from the tub area to the toilet room, which has more traditional fixtures and a door leading to the second-floor hallway. That allows it to double as a half bath for visitors.

The top floor contains three more bedrooms, one of which could easily serve as a home office thanks to its built-in shelves. It also has a hall bath. 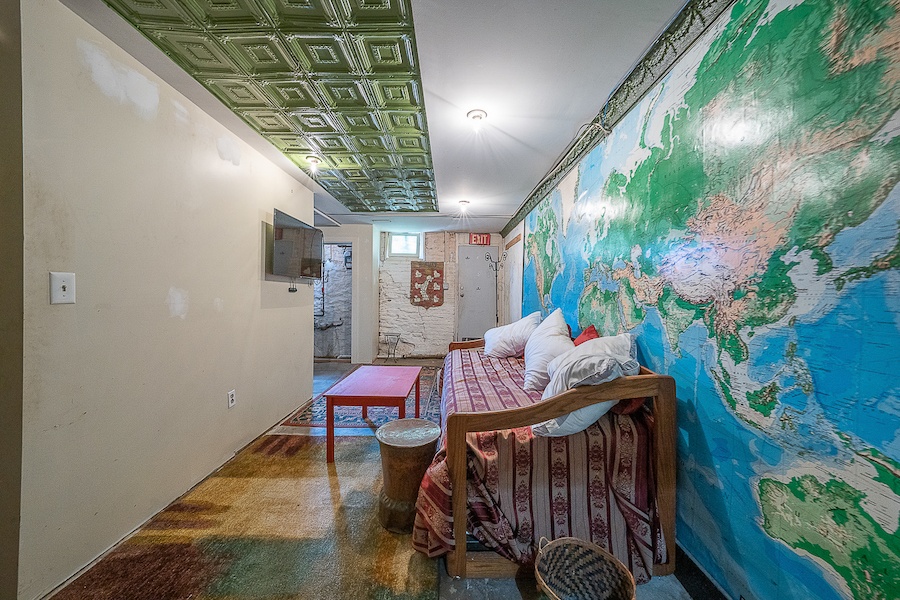 The walkout basement once housed a store. McNally outfitted it with a partial pressed-tin ceiling and crown molding. You will also find a full bath down here. 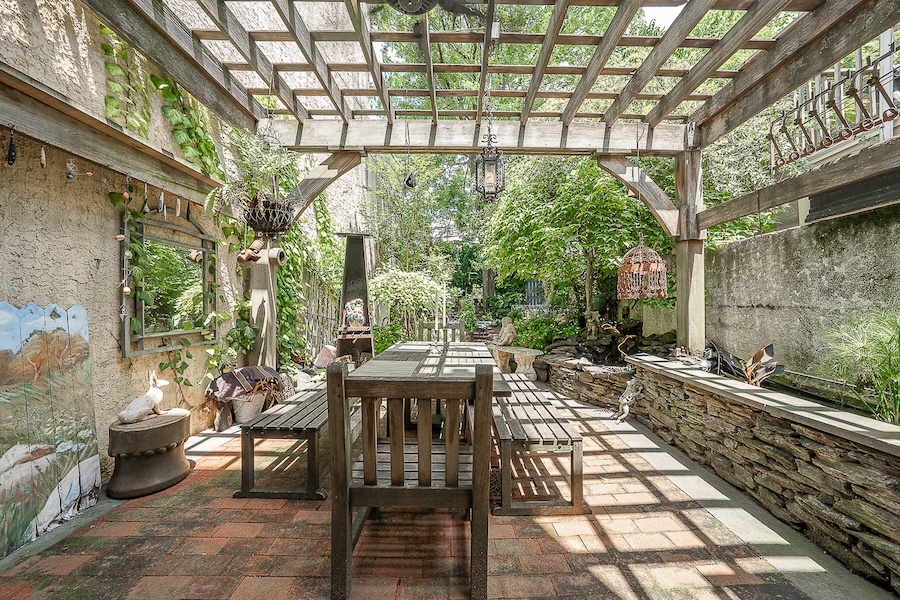 That bath will serve the guests you invite to your 50-foot-deep outdoor oasis as well. French doors lead from the kitchen to this space, which has room for dining under its arbor and relaxing further back. 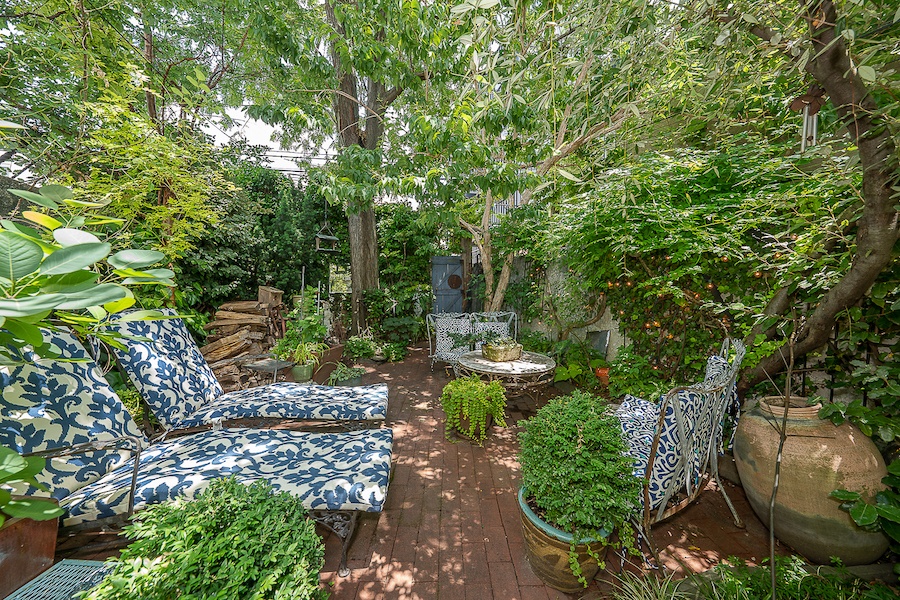 You, your family, and your guests will all enjoy this space and its calming natural features. They include a koi pond in the dining area and lush greenery in the lounge area.

“My partner and ex called it Shangri-La every time he came over,” McNally says about this Fairmount Avenue townhouse for sale. I’ll bet you will feel the same way after moving in.

Sad to say, when you don’t feel like cooking, you won’t have the London Grill as a dining option; the McNallys closed the restaurant after selling it to Jack McDavid and Joseph Spina in the spring of 2019; and its new owners have yet to find someone else to run it, thus bringing to an end a more-than-50-year run for London at a site that has housed a restaurant since 1843.

However, since Terry and Michael bought the place in 1991, a slew of great eateries and drinkeries have popped up all along Fairmount Avenue, so you will have plenty of dining options to choose from. And you can stock your own larder at two very good supermarkets nearby: Klein’s, a family-run independent supermarket in the Philadelphian one block west, and a Whole Foods Market in the Dalian apartment building at 22nd Street and Pennsylvania Avenue.

So not only will your inner Victorian be at peace living in this Fairmount Avenue townhouse for sale, but your inner chef will be delighted to live here too. And you will no doubt also enjoy the other attractions in the area, including the Philadelphia Museum of Art and Fairmount Park. Boathouse Row, the Azalea Garden and the Fairmount Water Works are all within walking distance.

OTHER STUFF: The listing agent states that the lot can provide off-street parking, but if you ask me, I wouldn’t shrink that wonderful backyard by a single square inch in order to stuff a car in back of it.