On the Market: Former Rooming House (and Speakeasy) in Bridesburg

Built in 1925 by a Polish immigrant, this house has welcomed many guests over the years. 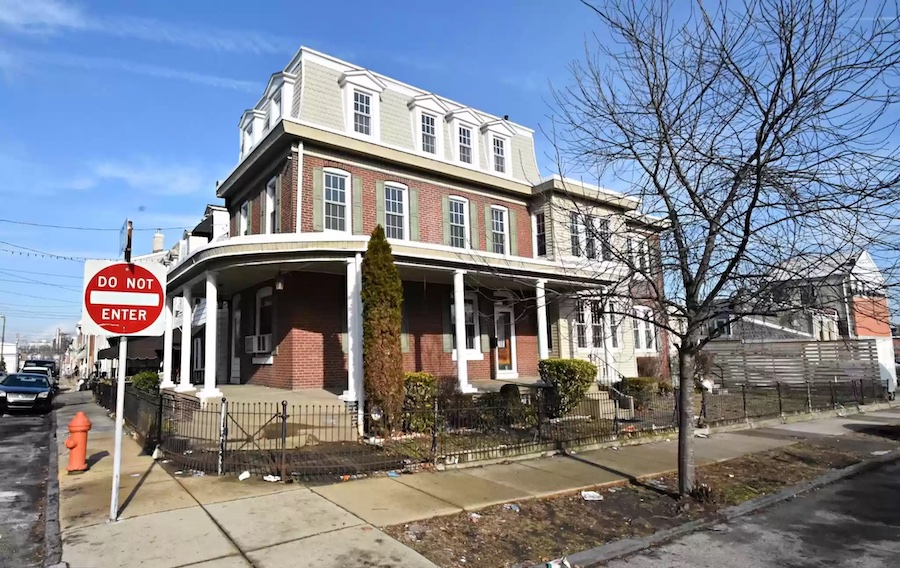 The Polish immigrant who built this Second Empire manse in 1925 apparently knew how to have a good time — in spite of Prohibition. You will find that 2755 Pratt St., Philadelphia, PA 19137, remains all ready for entertaining. | Bright MLS images via Neighborhood Real Estate

This handsome brick Second Empire house at Bridesburg’s northern end has many stories to tell.

And its current owner, Patty-Pat Koslowski, is only too happy to tell them.

Let’s start at the beginning: 1925, the year this former Bridesburg rooming house for sale was built.

“Stanislaw Blazejewski was the builder and first owner,” Koslowski writes in an email. “He was a Polish number writer/bookie who built this grand house for his family. But he was said to sit on his porch and yell at anyone who stopped to admire his house or touch the ornamental fence.”

Blazejewski may have objected to visitors stopping to admire his handiwork, but he had no problem with those stopping by for a drink. America was in the grip of Prohibition in the 1920s, but Blazejewski was one of the legions of Americans who surreptitiously provided solace for the thirsty. According to the listing agent’s description, “Local lore has many ‘bathtub gin parties’ happening in the basement as thirsty partygoers sipped gin and moonshine out of porcelain teacups.” And if the authorities showed up to break up the party, guests could escape via a hatch-covered stairway leading to the backyard.

Upstairs, the house has four bedrooms, two and a half baths and two staircases — one for the family and guests and another for the servants. 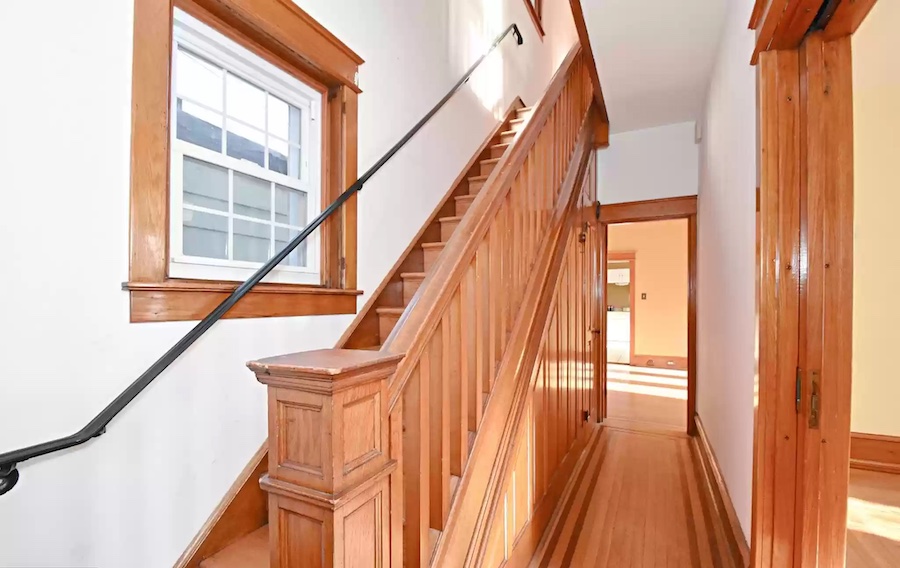 It also has two front entrances. The one on Pratt Street leads to this foyer. Note the quality of the woodwork and how well it has been cared for throughout the house. 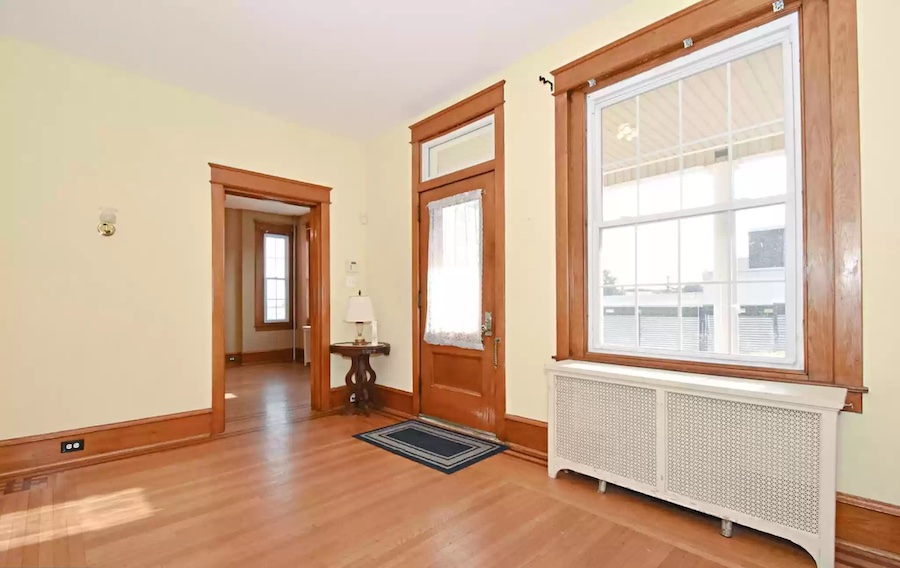 The other entrance, on Salmon Street, opens onto a sitting room located between the living and dining rooms. A wraparound porch connects both. 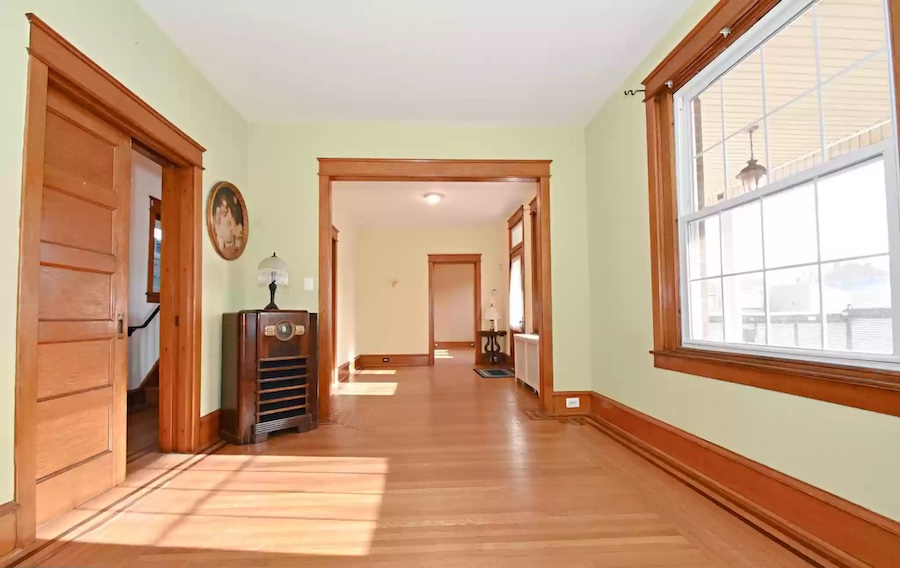 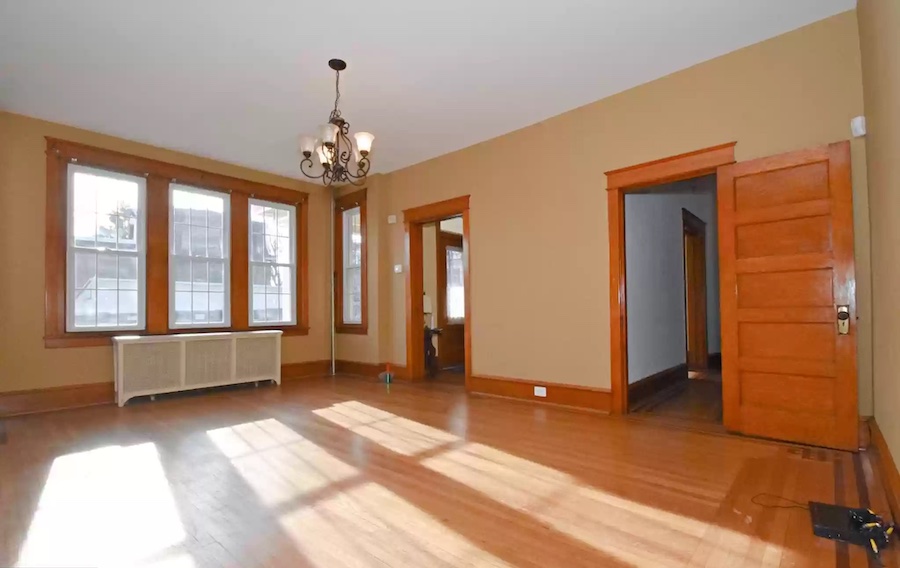 Large windows flood all the rooms of this house with light. A box bay provides extra windows for the main-floor dining room and second-floor primary bedroom. 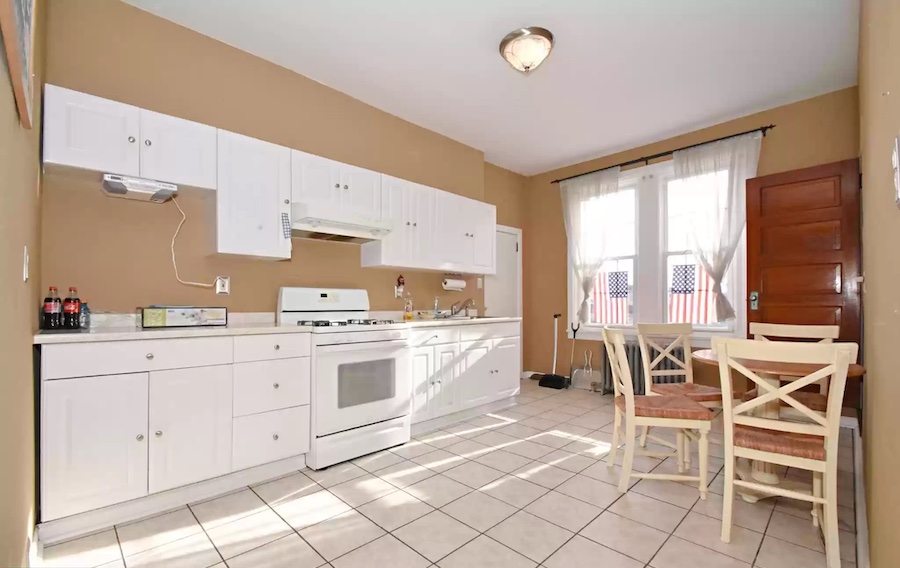 The servant stairs lead up from the kitchen to the upper floors. This arrangement also made this house well suited for the function it performed after Prohibition ended, namely, welcoming overnight guests. 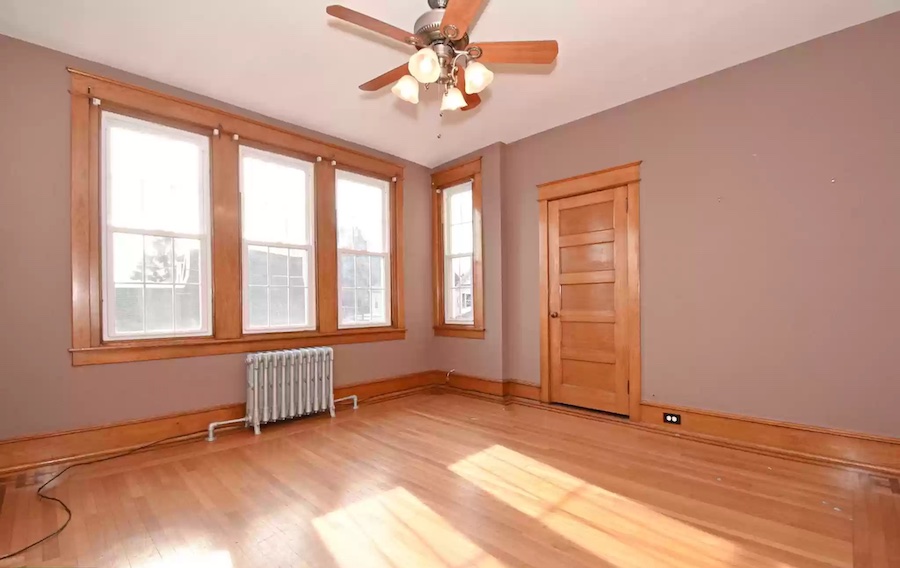 With four bedrooms and two bathrooms on two upper floors, this house made a perfect rooming house. “The glass-enclosed fire alarms are still stationed in the hallways for guests to break with a tiny metal hammer,” writes Koslowski. 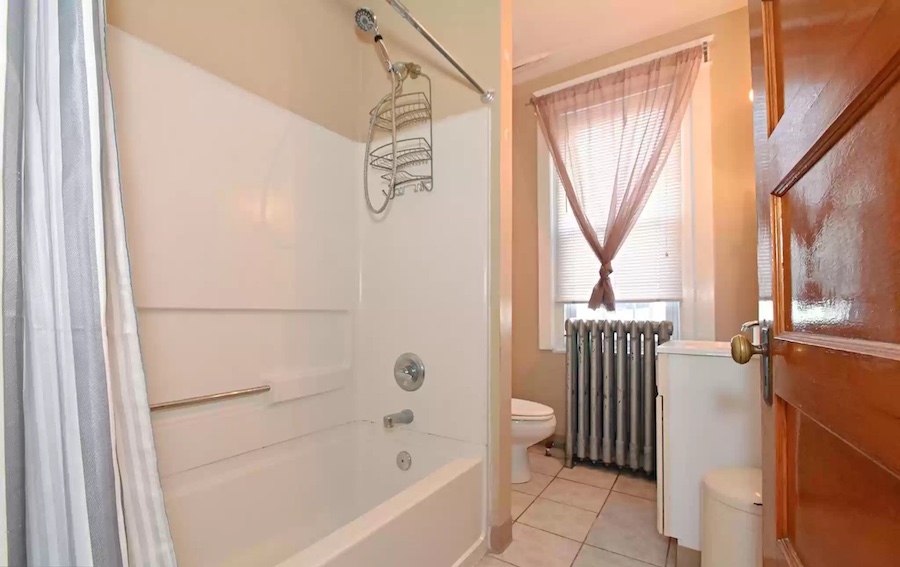 “The urban legend is that he hid his gambling money in the walls and floors,” Koslowski writes about Blazejewski. “We found a trap door in the third-floor closet but no moolah.” 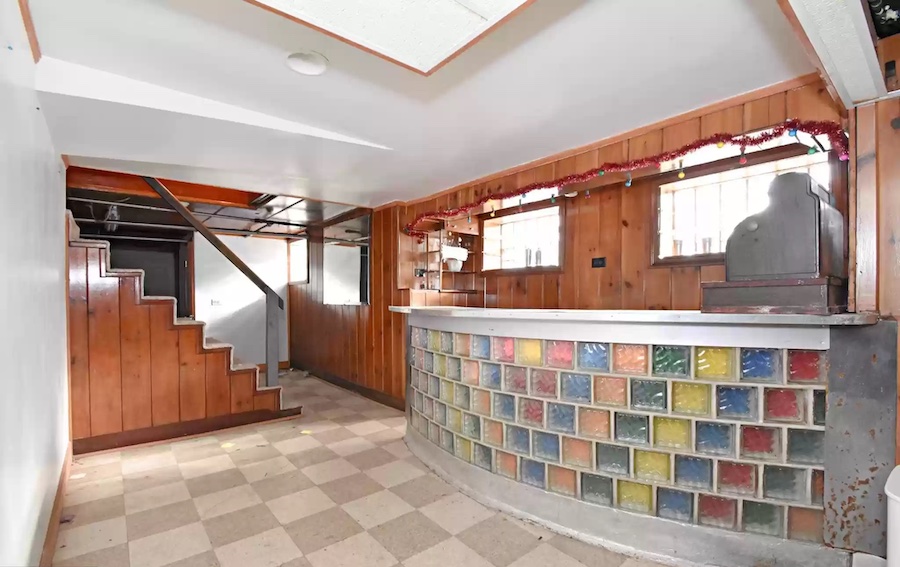 And judging from the appearance of its basement, the speakeasy got transformed into a legitimate bar. The speakeasy’s original cash register remains, but the bar got a facelift sometime in the 1950s. 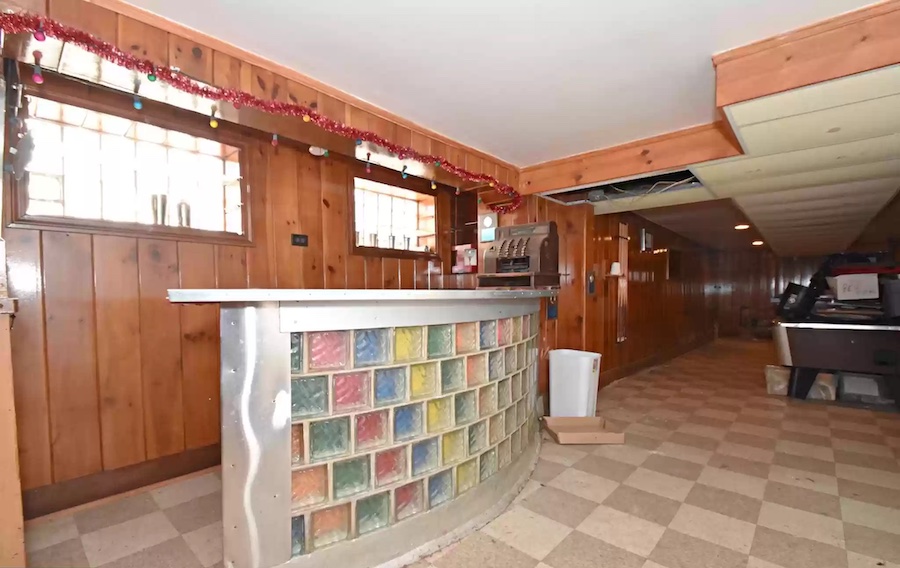 Another clue to its service as a neighborhood gathering place: A coin-operated pool table, its coin acceptor removed, sits in the middle of the basement.

Koslowski and her wife have maintained the tradition of hospitality since buying this former Bridesburg rooming house for sale in 2013. “We hosted the Bridesburg Historical Society on its porch,” she writes. “Members churned homemade ice cream on its porch in a throwback to all the corner ice cream stores in Bridesburg from the 1950s to the 1970s.”

The couple also welcomed pilgrims to Philly when Pope Francis visited the city in 2015. And they nearly had a celebrity guest drop in: “This house was being considered for the Adam Sandler movie ‘Hustle,’” she writes. The just-released film, directed by Philly native Jeremiah Zagar (Isaiah’s son), was both set and shot here. “It was going to be Sandler’s house, and scenes would be shot on the big porch and front door…but Chestnut Hill/Mount Airy won out!”

Cut off from the rest of the River Wards and the Northeast by industrial facilities and I-95, Bridesburg functions much like a world unto itself. Its residents prize its tight-knit nature, but this house is actually well situated to welcome visitors: Bridge Street, one of the four routes into the neighborhood, is located one block to its north.

As you can see from the pictures, this house is in very good condition but could use some updating. Its kitchen also needs a refrigerator at the very least. It’s being sold as-is. That gives you the opportunity to reshape it as you wish in order to write the next chapters of its story.

OTHER STUFF: If you read this on the day it was published (Wednesday, June 1st), the listing on the agency site below will inform you that this house is under contract. However, the listing agent informs me that the buyer missed the deadline to finalize their offer and that the house will return to active status the next day (Thursday, June 2nd).