An unusually wide and deep lot gave this house’s architect and builders room to push the envelope. 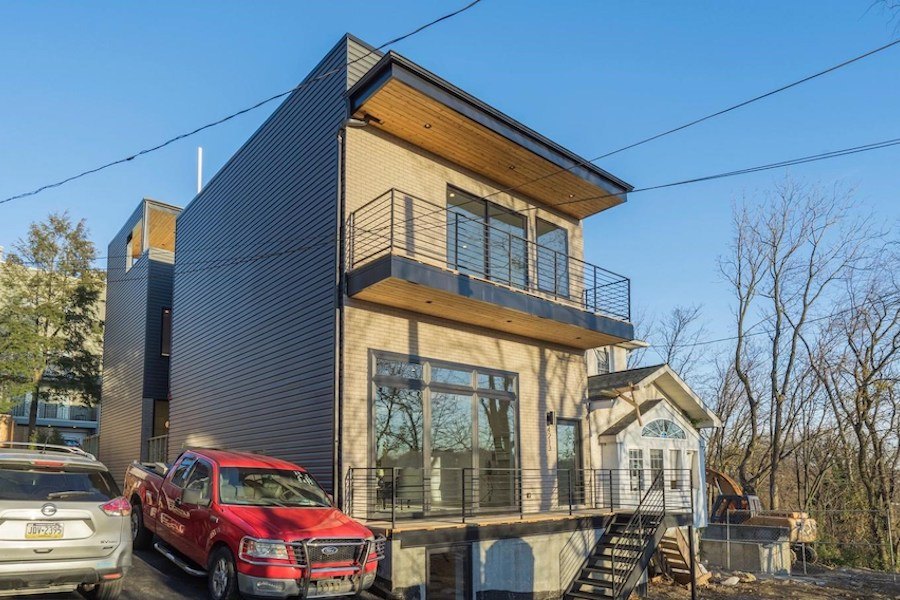 You know what a modern Philadelphia rowhouse is supposed to look like, right?

But this two-story Manayunk new construction rowhouse for sale looks the way it does because its builders got themselves a nice deal on three unusually large lots located next to one another.

This house is the first of two all-new properties builders Jonah Fliegelman and Gerald Logue are building on three adjoining lots at the end of Boone Street, across from Boone Park and up the hill from Main Street in Manayunk. The other new house will rise on the other side of the modest Colonial Revival house to the right of this house in the photo above.

When that house is finished, Fliegelman and Logue will rebuild that Colonial Revival house, which they bought along with the lots flanking it, so it resembles its two new neighbors.

You might note that this house is in basic form a classic Philadelphia workingman’s rowhouse: It has two stories, no more. But it’s actually about as far from that as it’s possible to get.

All three of these house lots are unusually wide and deep: 20 by 110 feet. That means that, like its neighbors, this house is unusually large: 20 by 65 feet, which leaves room in back for an ample backyard plus surface parking for two cars.

That large lot enabled Fliegelman and Logue to spread the house out.

“Most Manayunk homes are three-story-plus walkups,” Fleigelman says. “And by the time you get to the roof deck, you’re like, ‘Man, that was a great view, but not very easy to get to.’ But because of the dimensions of this lot, we’re able to build a very large home and make it only two stories. So we were able to stay within the constraints of the lot’s zoning and build an interesting modern home.”

Supreme Architects rose to the occasion. The house they designed has several interesting features and one unusual one. 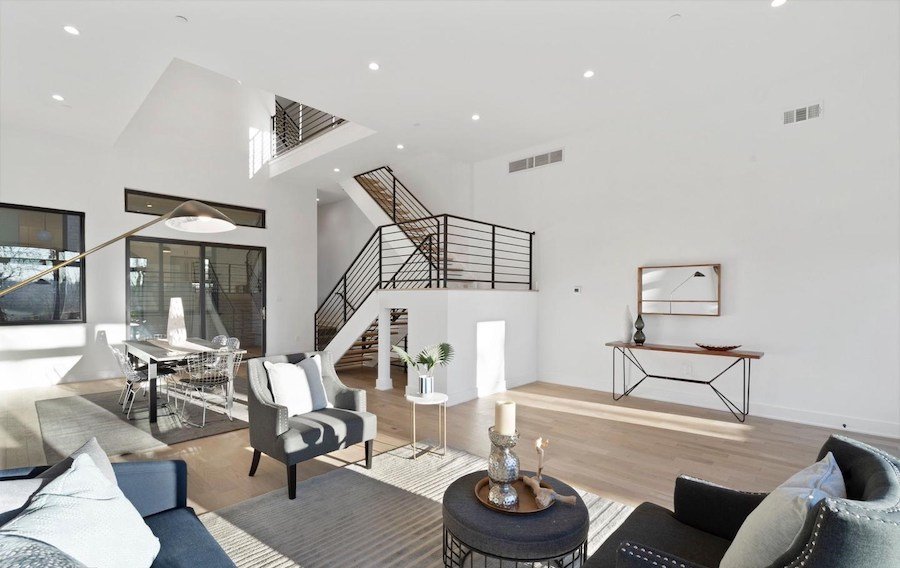 The first interesting feature is the main living area, which boasts a 12-foot-high ceiling punctured by an atrium rising the full two-story height of the house. 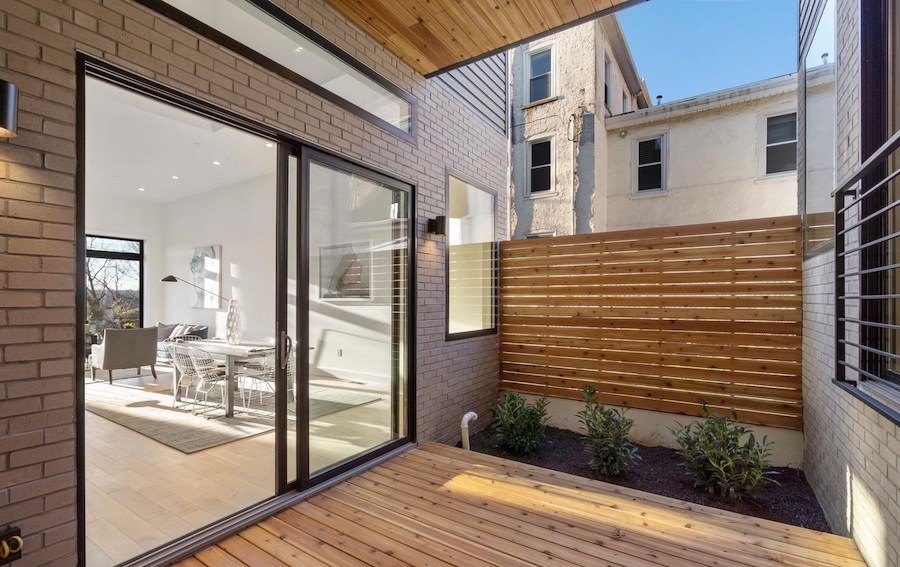 The unusual feature is the hole in the middle of the house’s main floor, separating the living area from the eat-in kitchen. Said hole contains a deck accessed by sliding doors from the main living area.

“Typical row homes don’t have windows on their long walls,” explains Fleigelman. “So in order to bring some light into the home, we made a courtyard in the middle of the house, which allows for light transfer all the way down.” 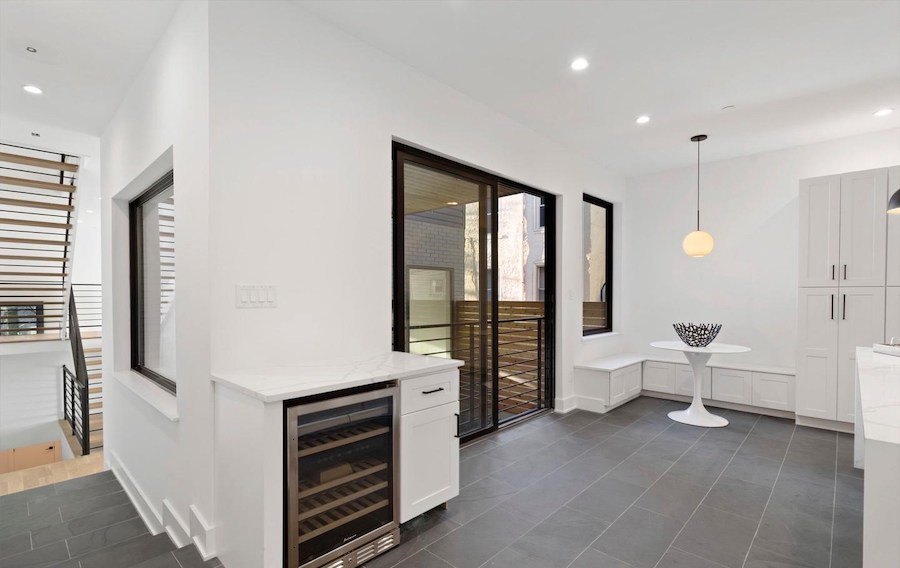 Sliding glass doors in the eat-in kitchen open onto a Juliet balcony overlooking the courtyard. 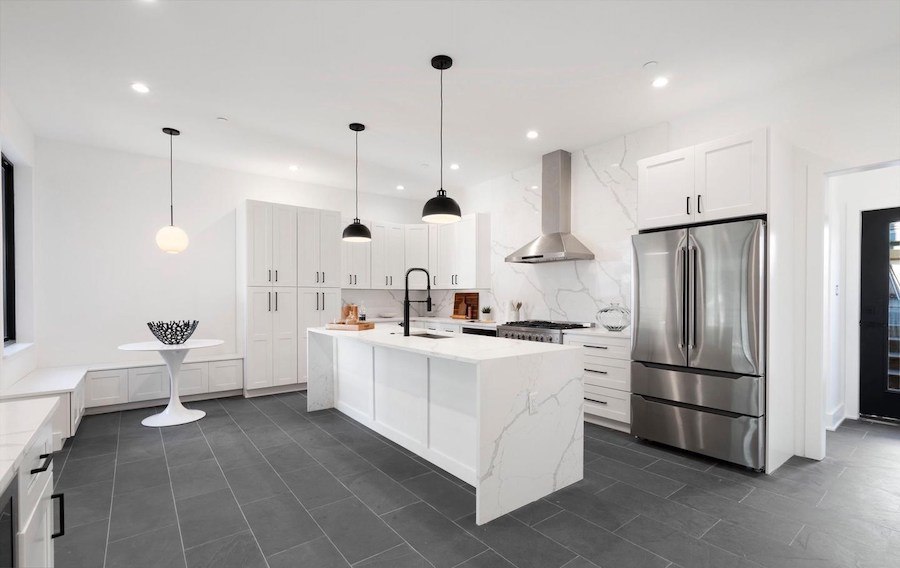 The kitchen features a six-burner gas range, a wine fridge and ample cabinet space. A few stairs and a short corridor separate it from the dining area. 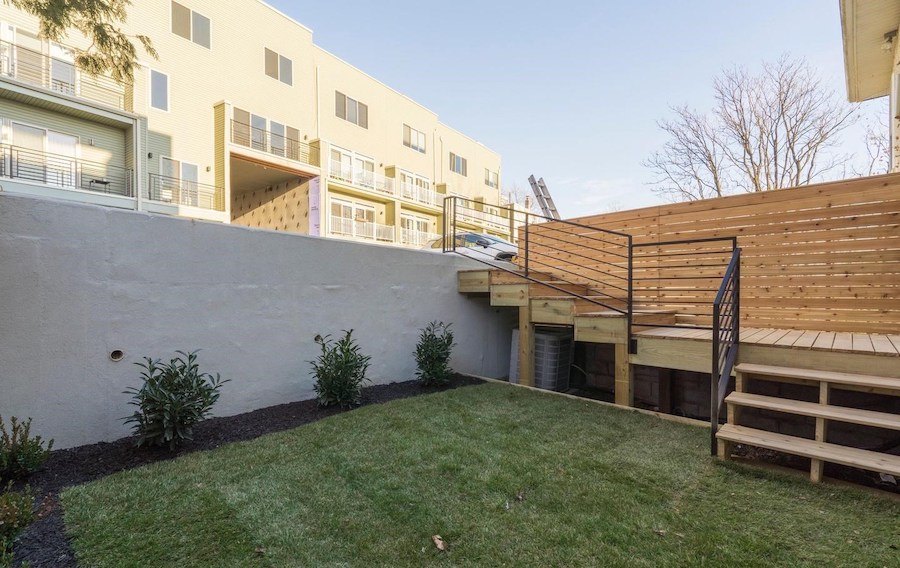 A mud room and half bath separate the kitchen from the backyard. 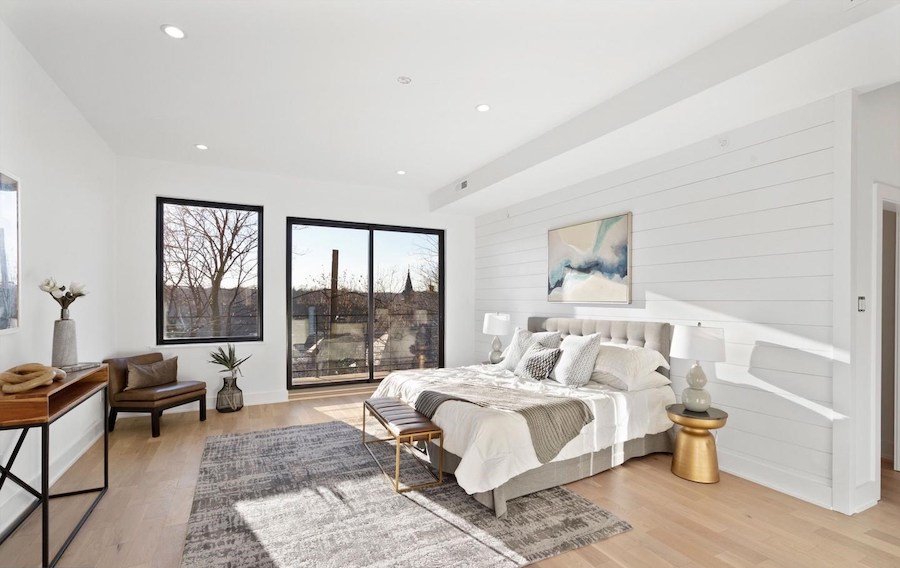 All the bedrooms fit on the second floor. The primary bedroom is in front. 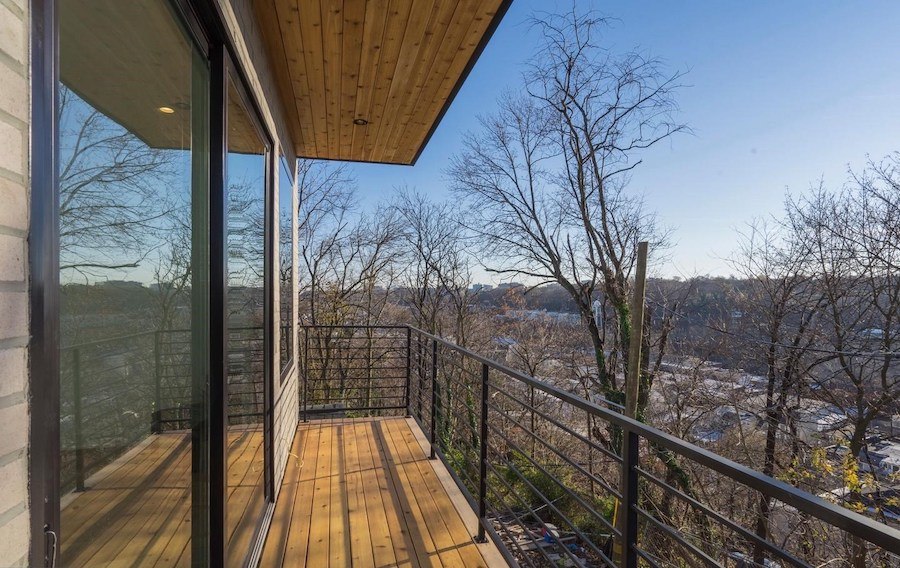 It has its own balcony with a great view of Manayunk below. 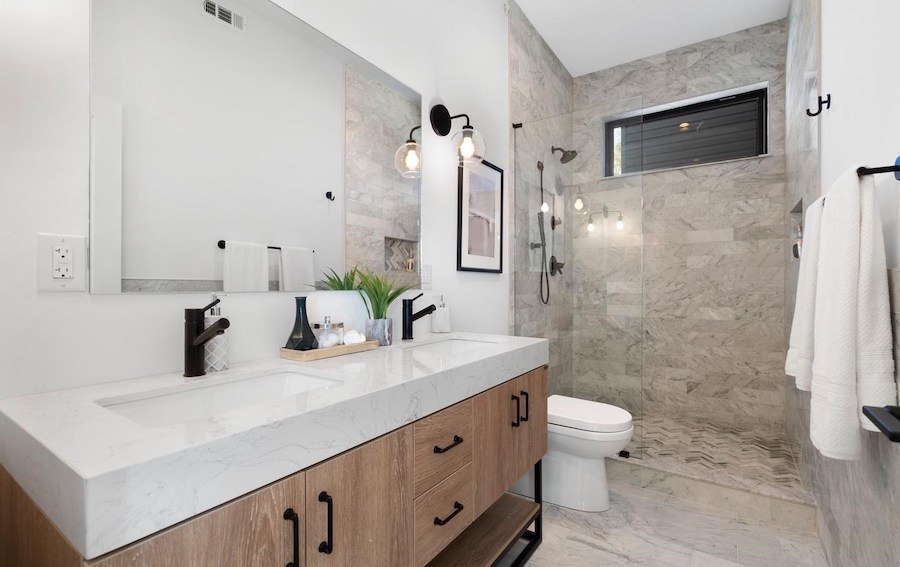 Its bathroom has a dual vanity and a marble stall shower. 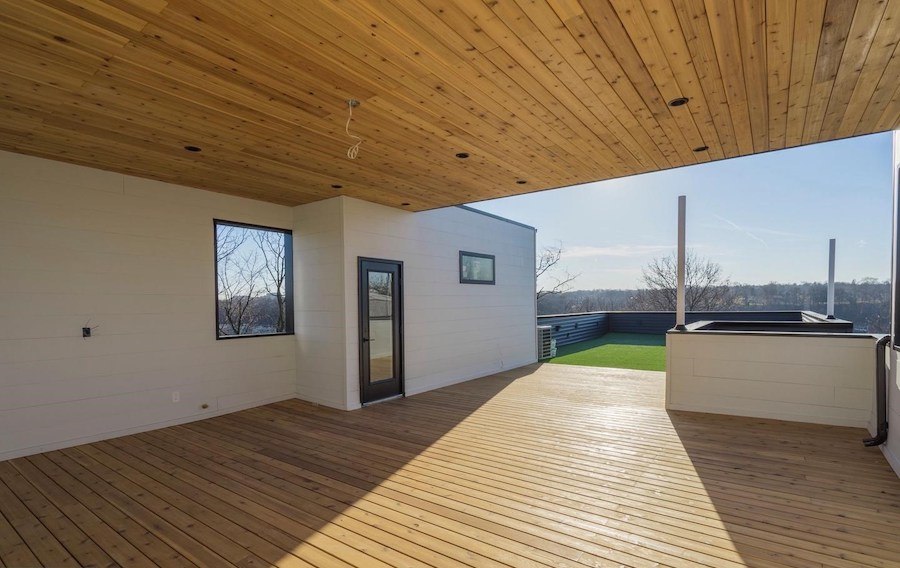 And above it all is a huge, partially covered roof deck equipped with hookups for an outdoor kitchen with a gas grill and sink.

This deck has two interesting details. One is the artificial turf on the open-air section. Fleigelman said they installed this to differentiate it from the typical fiberglass bathtub found atop most new construction houses.

Another is the use of Western red cedar on the deck and ceiling (and the balcony, front porch and center courtyard deck). Fliegelman and Logue got a good deal on a large lot of cedar, and carpenter Travis Ferreira made the cedar look great.

The use of natural wood, Fliegelman says, also makes this house stand out from other new construction houses. “To my personal disappointment, and especially in this region, we’re using materials that ‘last forever,’ and they’re man-made.

“We use them too, because they’re often the only choice that’s economical and available, but in all our new builds, we try to use as many natural materials as possible. Cedar has been used forever and does last, quote-unquote, forever. The resin inside it keeps it from rotting.”

Because this house sits at the end of the street, you won’t have to worry about things like drunken revelers wandering off Main Street and disturbing your peace. Yet you will enjoy the same convenient access to that adult playground other ’Yunkers enjoy, not to mention the Schuylkill Canal towpath biking-hiking trail and Manayunk Regional Rail station.

Of course, all this comes with a price. But I’d say that this Manayunk new construction rowhouse for sale is totally worth it.

*OTHER STUFF: The facts-and-figures data say this house has four bedrooms, but the photos only show three, and the listing copy states the same thing. My best guess is that someone counted the finished basement, which has a full bath, as the fourth bedroom.