On the Market: Converted Warehouse in Dickinson Narrows

This house has had several industrial lives before being turned into a one-of-a-kind showstopper that should delight any urban sophisticate. 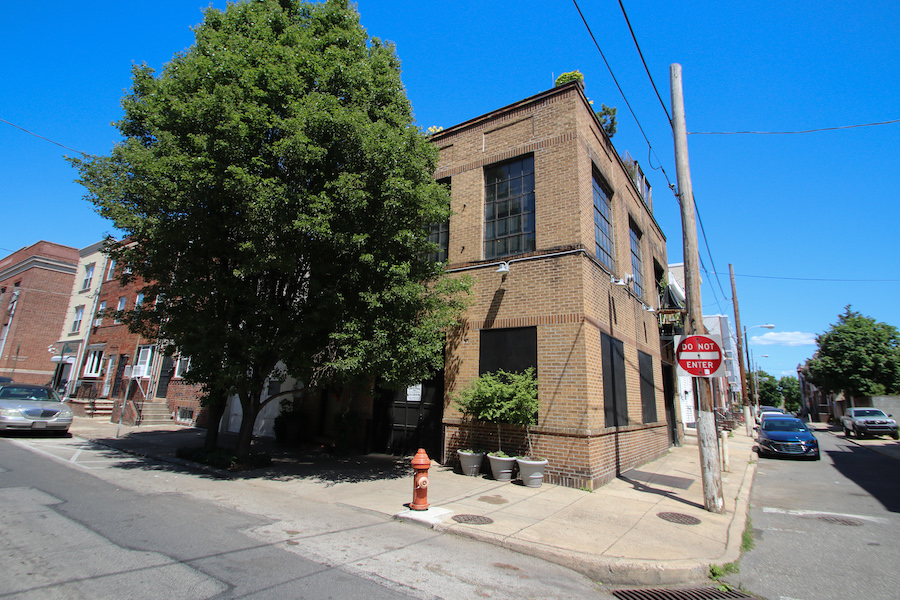 This structure has housed a series of light industrial businesses since it was built way before 1960. For the last 20 years, it’s housed a globetrotting collector of art and decorative objects. Now, 1125-27 S. 6th St., Philadelphia, Pa. 19147, could house you. | Photos: Sergio Rojstaczer via Tara Management Services, Inc.

Are you looking for a spacious house where you can raise your kids in comfort?

Come back to this section on Monday, then, for this house isn’t it.

Truth to tell, your kids might actually love the sleeping lofts tucked away in the upper reaches of this Dickinson Narrows converted warehouse for sale, but one look at these pictures should convince you that they’d be accidents waiting to happen.

Instead, this house is the unique vision of a globetrotting urban sophisticate: namely, its owner, Rob Rioja. The purchasing agent-turned-flight attendant bought this structure 20 years ago from an Italian family who had used it for a tool-grinding business and as storage space for 20 years.

But that’s because, contrary to the public records, this building went up well before 1960. I can’t say exactly when it was built, but from some of the details that remain in its largely empty street floor, it looks to me (and to Rioja) like it was built sometime in the mid- to late 19th century.

After buying it, Rioja and a friend turned its upstairs floor into a very modern multi-level showpiece.

The show begins in a small foyer with entrances from both 6th Street and the street-floor garage. The Art Deco light fixture hanging from its ceiling Rioja purchased in Brussels about 20 years ago. 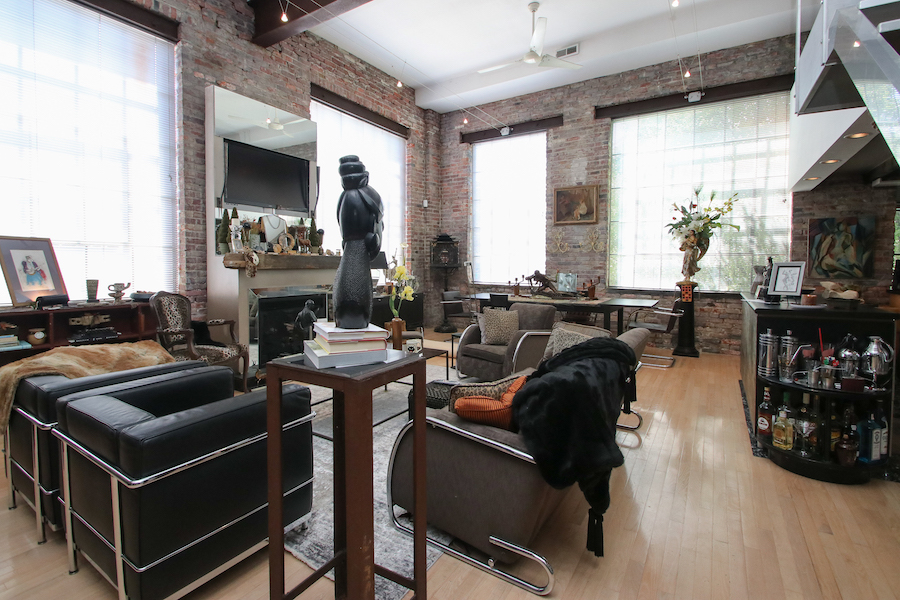 There are even more unique items and artwork Rioja has collected over the years up in the living area. The main living room has space enough to show it off. Plus it has large windows that let lots of natural light pour in. 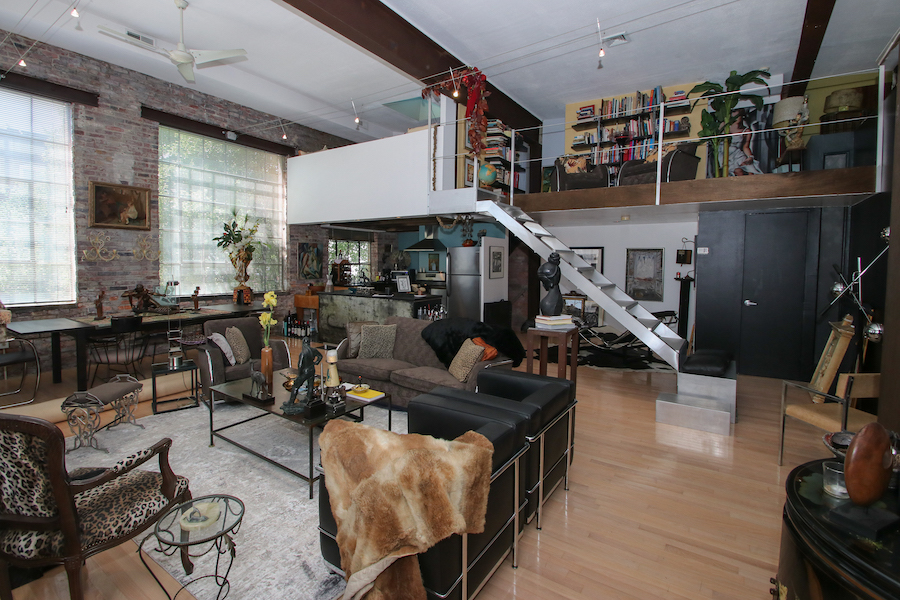 The ceiling is high enough that you could stick a second floor beneath it, and that Rioja did as well. It sits over the kitchen, a small den and the stairs from the foyer.

The choice of a modernist aesthetic for the living space allowed Rioja to assemble and display an eclectic collection of objects. “I love art, I love decorating, and I love fine things,” he says. “And I’ve learned that if you like something, you can meld it, and it will all fit in some way.” 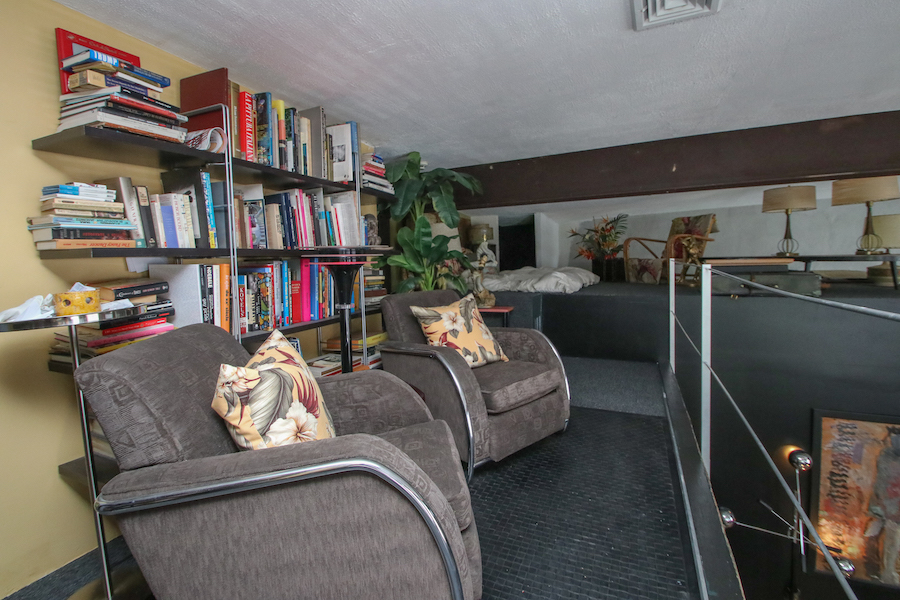 Up on that second level, Rioja put a library and two sleeping lofts. The one next to the library is cozy indeed. “It’s my little zone-out,” he says. 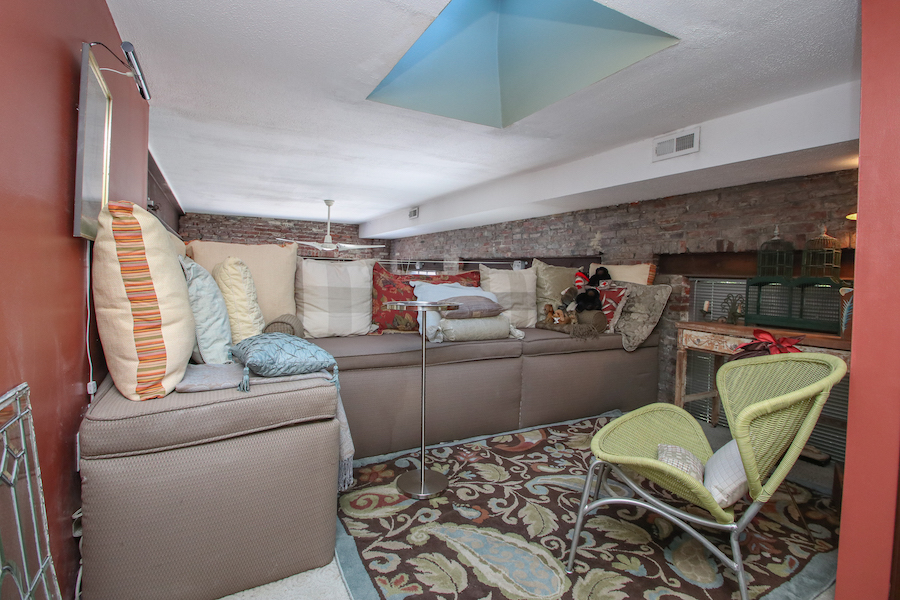 The other sleeping loft has a skylight, sits atop the kitchen and can be reached both from the library and from stairs leading up from the kitchen. It also makes a unique conversation piece, er, space. “It’s like a little private nook,” says Rioja. “At parties, you can look out over the whole downstairs.” 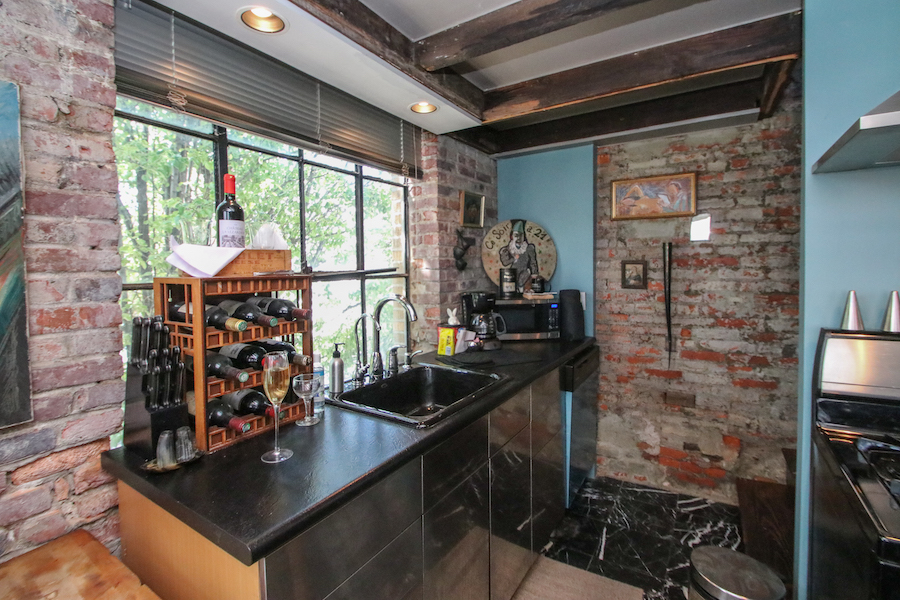 Then again, every space in this place offers something to talk about, thanks mainly to Rioja’s good eye. 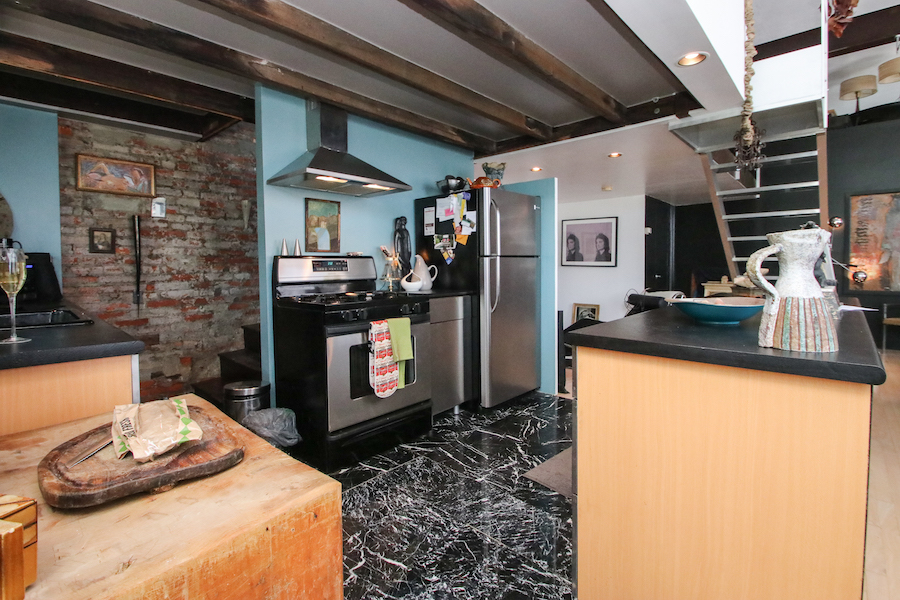 The kitchen is designed so you can look out the factory-style window onto 6th Street from its sink. It also has an actual butcher block and an island that could easily seat guests. 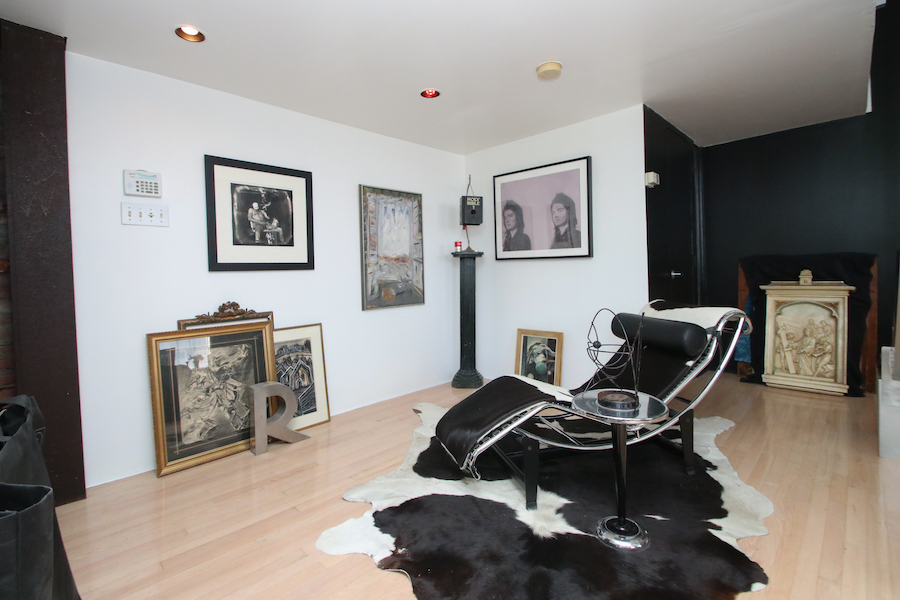 Next to the kitchen is a space that serves as a den. 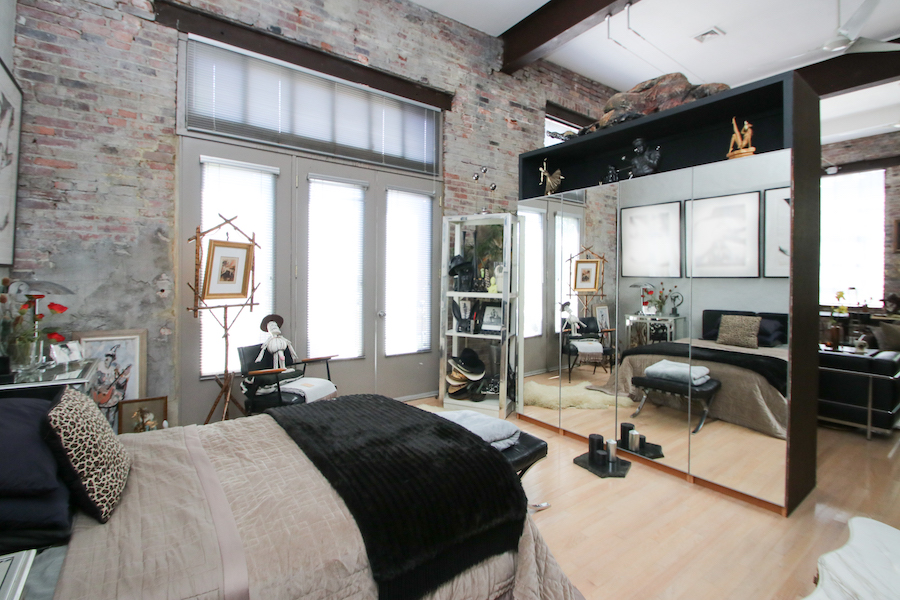 The primary bedroom is also part of the open main floor, separated from the living and dining space by a mirrored closet. 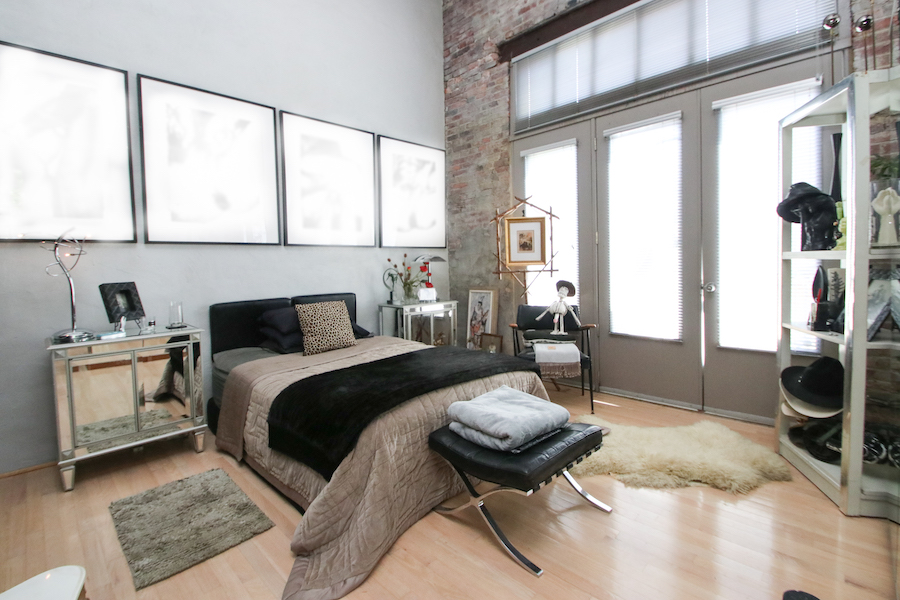 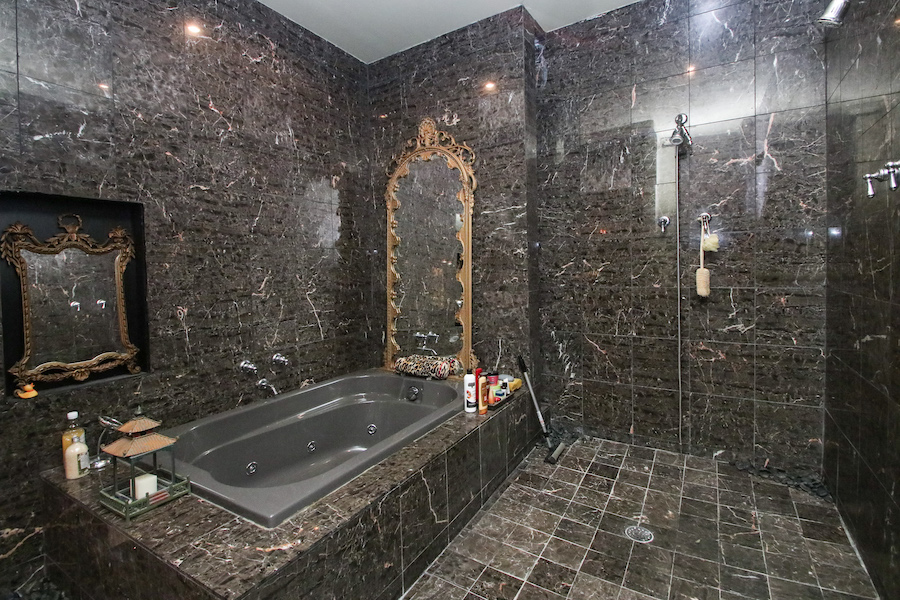 Past another closet lies the marble-clad primary bathroom. This sumptuous space has a jetted soaking tub and a walk-in shower with dual heads. (“This is what happens when you get old and you forget to have children,” he says.) 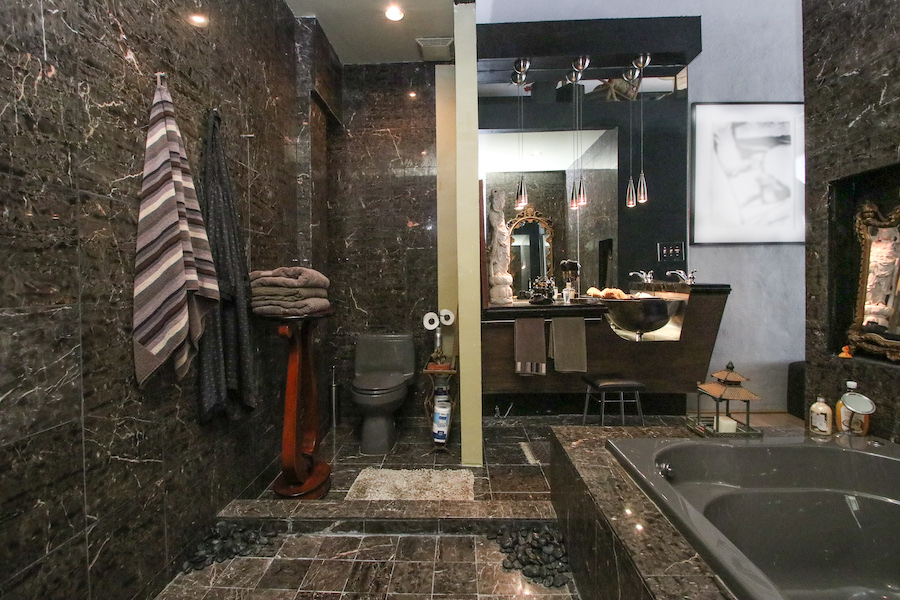 It also has a most original face basin, built from a metal bowl Rioja picked up from a flea market in South Jersey. “I paid nothing for it, and I thought, ‘It’s gonna be a fabulous sink someday.’” 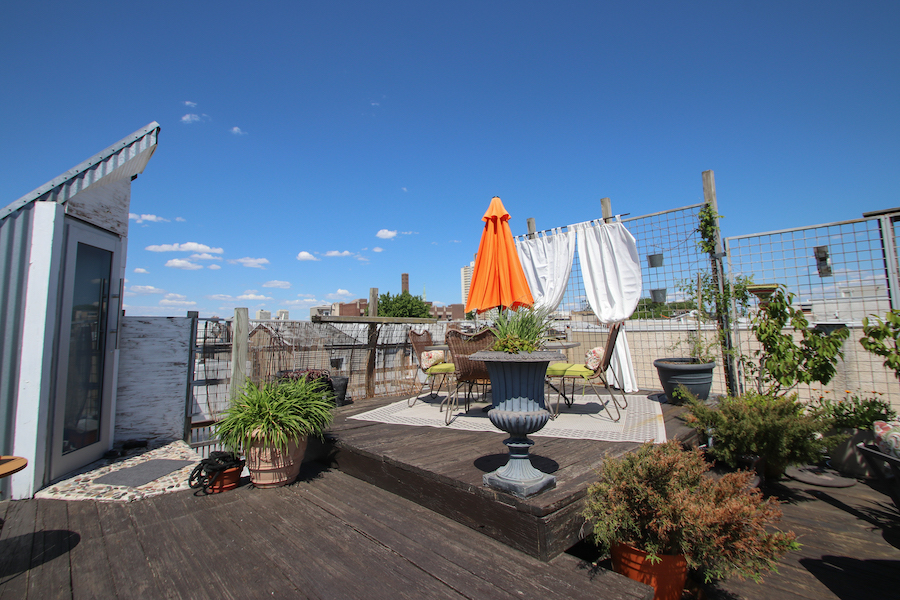 And topping it all off is a roof deck with a 360-degree view to die for.  You reach it from stairs leading up from the second sleeping loft. Rioja turned it into a garden spot using planters, metalwork and fabric. From here you can see not only the Center City skyline but both the Ben Franklin and Walt Whitman bridges, not to mention the fireworks that go off during Eagles games at the Linc. 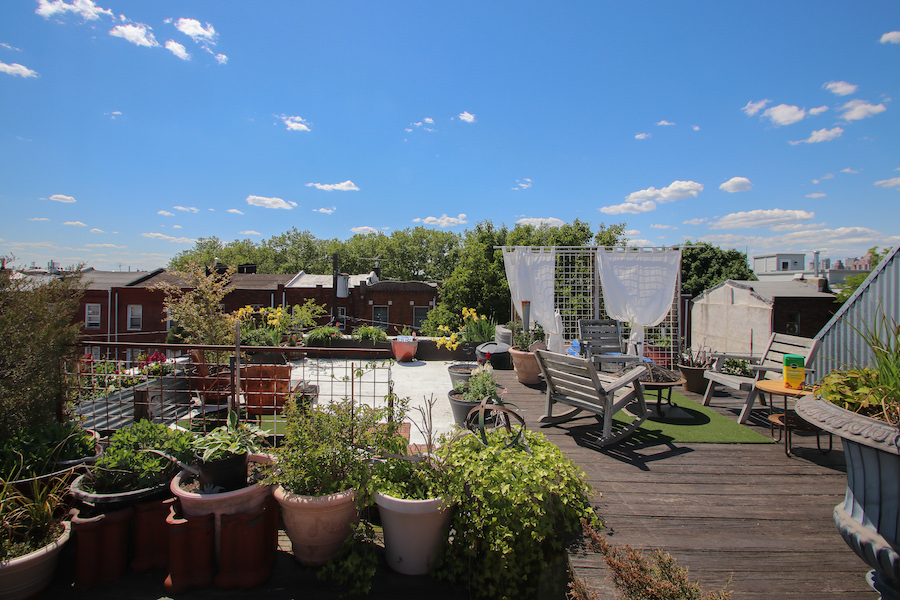 “I love this building because I don’t share walls with anyone,” he says. “It’s like you’re in your own little private Idaho.”

Rioja had plans for the unused downstairs space as well. He had intended to turn it into an accessory apartment. But, as they say, life is what happens while you were making other plans, and Rioja has now decided to return to his native Austin so he can look after his aging mother.

Unfortunately, that means that all the fabulous objects you see here go with him. But that also means that you now have a stylish blank canvas upon which to project your own personality and sense of style, one that’s at once private and convenient to many of the best things about South Philly, from East Passyunk Avenue to Bok Bar to the big-box-shopping Valhalla along Columbus Boulevard.

And while you wouldn’t want to raise your kids in it, it does have plenty of room to grow. It even has a basement that offers even more space to store stuff and a built-in one-car garage. That too makes this Dickinson Narrows converted warehouse for sale a rare find indeed.