Just Listed in the Poconos: Five-Acre Lot in Bear Creek 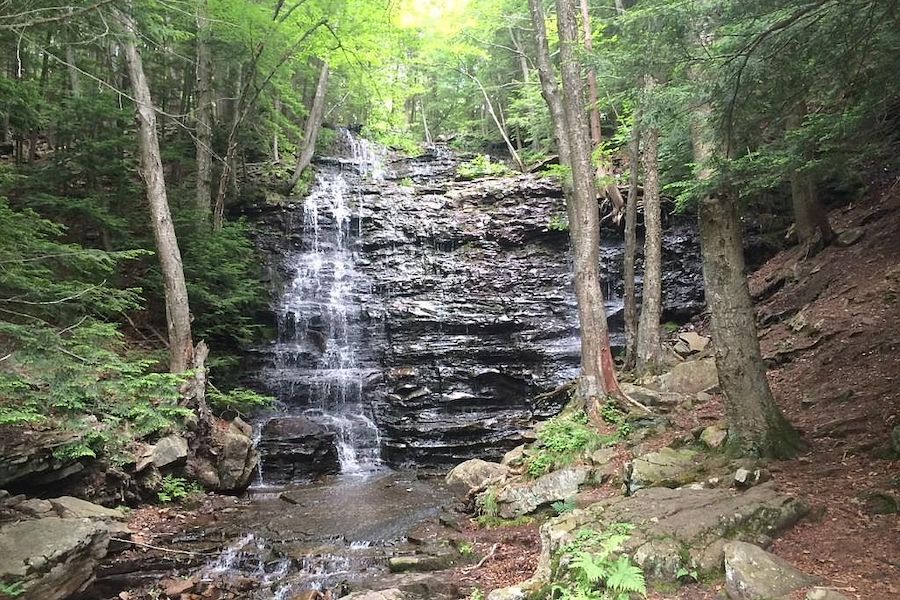 This waterfall isn’t quite as dramatic as the one outside Pittsburgh atop which “Fallingwater” sits, but the 60-foot-high Buttermilk Falls makes for a dramatic enough setting for your own vacation home. It’s part of a five-acre lot on White Haven Rd., Bear Creek, Pa. 18702 | Luzerne County Association of Realtors MLS images via Century 21 Smith Horrigan Group

The story of the most famous house in Pennsylvania began when Pittsburgh department-store magnate Edgar Kaufmann took starchitect Frank Lloyd Wright on a tour of the lot in Bear Run where he wanted Wright to design a house for his family.

Wright asked Kaufmann what their favorite spot was on the property. Kaufmann showed him a clearing next to a waterfall where they loved to picnic and watch the stream.

Wright promptly plopped the Kaufmanns’ house on top of the waterfall. And the rest is history.

I’m not suggesting that you even try to duplicate “Fallingwater” on this Bear Creek lot for sale. But if you are looking for a one-of-a-kind lot on which to build your own vacation retreat, well, here it is.

And to be fair, its current owner wouldn’t mind if you did try to one-up Wright on this lot. 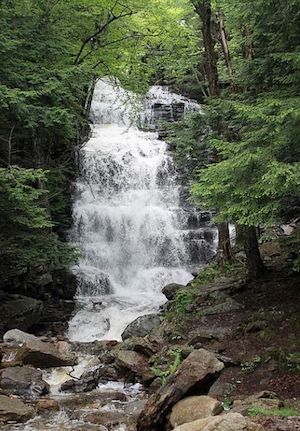 “I would hope that if somebody did build on there, they wouldn’t pack it out with as many homes as humanly possible,” says Victor Juliano. (At least in theory, local zoning would allow you to build up to five houses on this lot if you found the room.) “I was always thinking of a Frank Lloyd Wright type of house.”

This lot certainly has the Wright stuff. A tributary of Bear Creek runs through its middle, and in the middle of that tributary’s passage through this lot is the 60-foot-high waterfall you see at left, known as Buttermilk Falls. The lot is surrounded by conservation lands, which means that your retreat won’t be surrounded by subdivisions someday.

This lot has been in private hands for more than a century and in the hands of Juliano’s family for 80 years. It was assembled by a Northeast Pennsylvania tycoon named Albert Lewis. Lewis, whose work as a timekeeper on the Lehigh Valley Railroad impressed founder Asa Packer so much he put Lewis in charge of the first train to run from the railroad’s hub in Mauch Chunk (now Jim Thorpe) to White Haven, married into the family that supplied lumber to the railroad and eventually went into the lumber business himself.

What brought Lewis to Bear Creek, however, was ice. He built a dam and a company village on the creek a half-mile upstream from here in 1895 that became the foundation of a prosperous ice-hauling business. The company survived his death in 1923, going out of business finally in 1938. This lot was not part of the ice operation, but it was part of the huge tracts of land Lewis amassed in Luzerne County. Juliano estimates that at his peak, Lewis owned about 100,000 acres in this rural part of the county.

Juliano’s grandfather eventually acquired this land from Lewis’ descendants through sheer persistence. When he went camping on the plot, Juliano says, he would ask the owners if they were willing to sell it. “And for years and years, they said No, they had no interest in selling it. And one time, he went up there, and they said Yes, and he bought it.” This would have been sometime around 1940, 17 years after Lewis’ death. 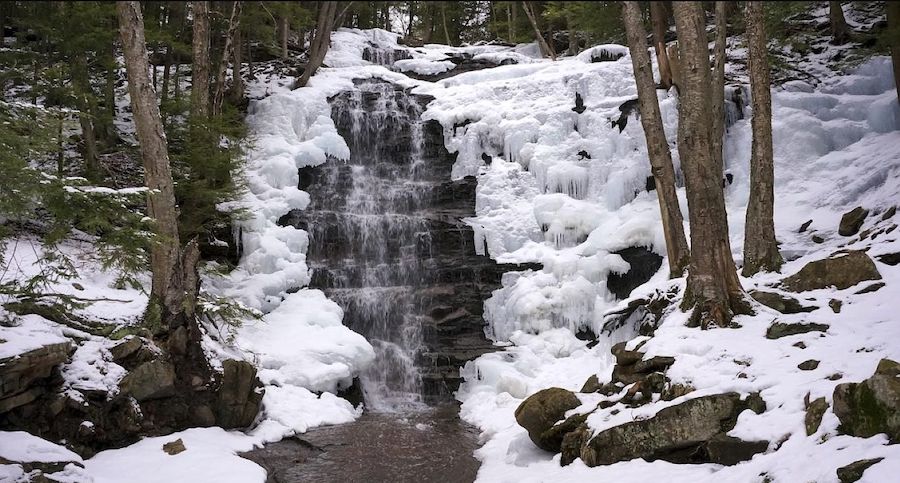 The falls in winter

Since then, Juliano’s family has used it as a getaway and a campground. Their own plans to build on the property never came to fruition, and as a result, he says, they became caretakers of the lot. And the lot became a community trust of sorts. “I met a guy who was in his 90s” once in Bear Creek Village, he says. “And he told me that he used to go there with his father and play in the water. Somebody else told me that was where they proposed to their wife. It’s meant a lot to a lot of people.”

Juliano, who now lives in South Jersey, no longer visits this place like he used to, nor do his relatives, so they have decided to sell it on the open market for the first time since it was assembled by Lewis in the early 20th century. The stories he tells should make you aware that you are buying not just a lot with a lovely waterfall in it but a piece of Bear Creek Village history. It’s yours to do with as you please, but if you decide to restrict access to it while you prepare to build your own vacation dream house on it, be aware that you might want to let your neighbors know respectfully that you plan on making it truly private.

Closeup of the face of the falls

Even though this lot is closer to Wilkes-Barre, a 20-minute drive to the northeast, than to Mt. Pocono, about 35 minutes to the east, it’s still a good place to build a Poconos vacation home, as several ski resorts, including Big Boulder, Split Rock and Camelback, are a 25- to 35-minute drive from here. And this lot is easier to get to from Philadelphia than many other places in the heart of the Poconos: it’s about a 10-minute drive from the Wilkes-Barre interchange (Exit 115) of the Pennsylvania Turnpike Northeast Extension. With state game lands even closer to this lot, you can indulge your hunting desires in season as well.

Even though he would love to see a “Frank Lloyd Wright type of house” on this site, Juliano, who is himself a developer, says he never would have chosen Wright himself to build it had he pursued that vision: “He just made the decision and he built what he wanted,” he says. “He wouldn’t be my ideal architect.”

Given his personality, temper and monumental ego, he probably wouldn’t have been yours either, but I suggest that whoever you do choose should be at the very least attuned to nature and rural environments. You will be giving that person a spectacular canvas on which to create a work of art.

Juliano hopes that whoever buys it at least doesn’t “clear the land and put a bunch of modular houses on top.” And, he adds, “You wouldn’t want to put a McMansion on top, you know what I mean?”

I certainly do. And I hope you do, too. It will be your land, and you can do with it what you will, but whatever you do with it, I think you at least should respect both its history and its setting.

OTHER STUFF: Should you decide to build on this lot, you will need to provide your own electricity source, find a suitable source of water and build your own septic system, for this lot lacks public utilities.