As far as we know, George Washington did not sleep here. But he did direct the main action in the Battle of Germantown from right in front of the 1729 Michael Billmeyer House. 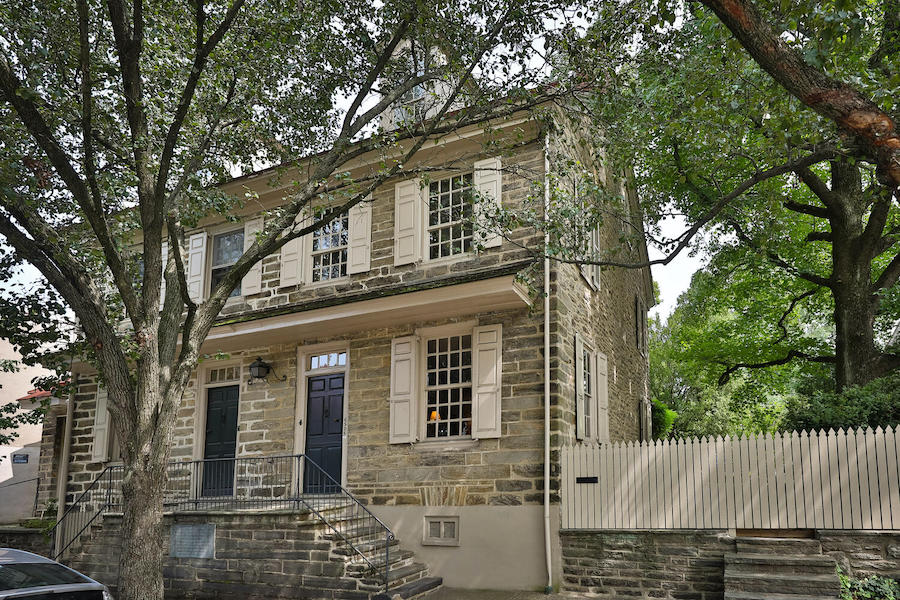 Up near the original north end of the National Landmark Colonial Germantown Historic District, you will find this house that played a bit part in the 1777 Battle of Germantown. It can now be yours, and it’s located at 6505 Germantown Ave., Philadelphia, Pa. 19119 | Photos: Gary G. Schempp Photography via Elfant Wissahickon Realtors

Travel up Germantown Avenue from Wayne Junction and you can’t avoid bumping into history. Germantown is the second-oldest European settlement in Philadelphia County, and its earliest settlers include some of the city’s most illustrious names: Rittenhouse. Wister. Chew. And, for a little while, George Washington, who made Germantown his home while a yellow fever epidemic seized the city during his second term as President.

Washington’s stay at the “Germantown White House,” however, wasn’t the first time he had been up that way. In the fall of 1777, Gen. Washington led the American troops into battle against the British forces Gen. George Howe had moved up from occupied Philadelphia at the Battle of Germantown, which the Americans ultimately lost.

The main fight of that battle took place on the grounds of Cliveden, the residence of Benjamin Chew on Germantown’s northern edge. Howe’s troops were garrisoned in the house, and the Americans were determined to take it. Washington directed the Americans’ repeated assaults on Cliveden while standing in front of the house you see above, one block north of Cliveden today. 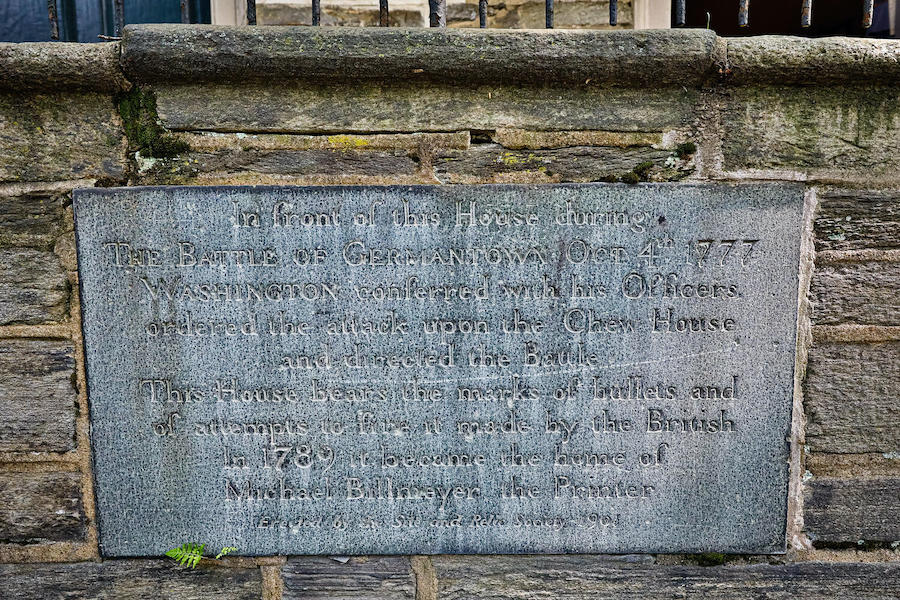 Plaque commemorating Washington’s command of the Battle of Germantown

The above plaque, placed on its front steps in 1901 by the Site and Relic Society, commemorates Washington’s command. And yes, you can still see the bullet holes the battle left on this house.

Since 1979, an architect couple have served as faithful stewards of this house. David Vaughan, a principal at Venturi, Scott Brown and Associates, and his wife Terry, a professor at Penn’s Graduate School of Fine Arts (now Weitzman School of Design), bought the house from its owner, the Germantown Historical Society, in 1979 after moving into it nine years earlier. “They couldn’t afford to maintain it,” says David.

The Vaughans had settled on the house as a place to live after they had returned to Philadelphia from a 14-month trek through much of Europe, North Africa, the Middle East and South Asia. The house’s solid construction and architecture, David says, appealed to them. Now, after a half-century in this house, the Vaughans are heading for the other coast — Bend, Ore., closer to some of their children, to be specific — and they would like to find new stewards for it. 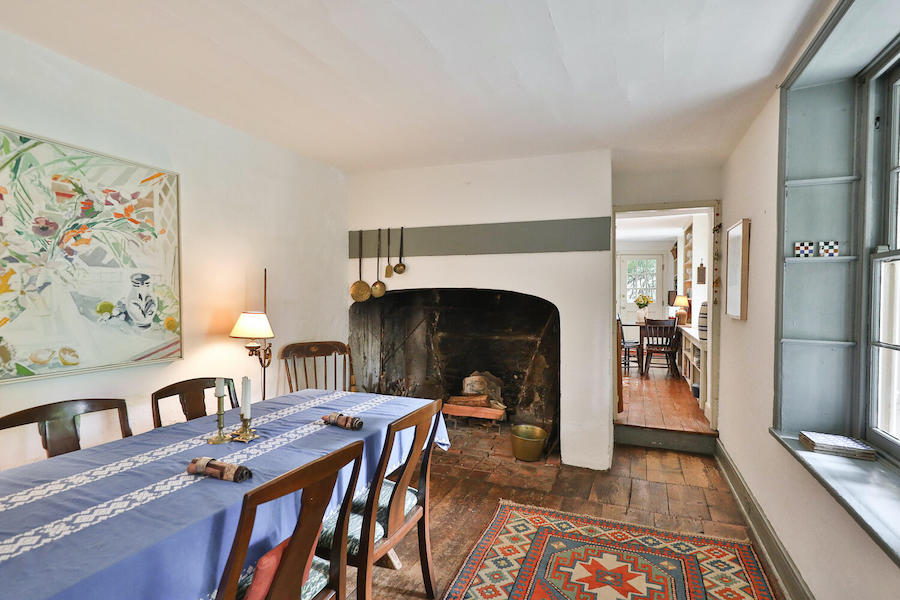 The house and its attached twin were built in three sections. The oldest section, built by John George Bensell in 1729, lies in the middle of the present-day house. The dining room, which contains the original kitchen fireplace, takes up this section’s first floor. 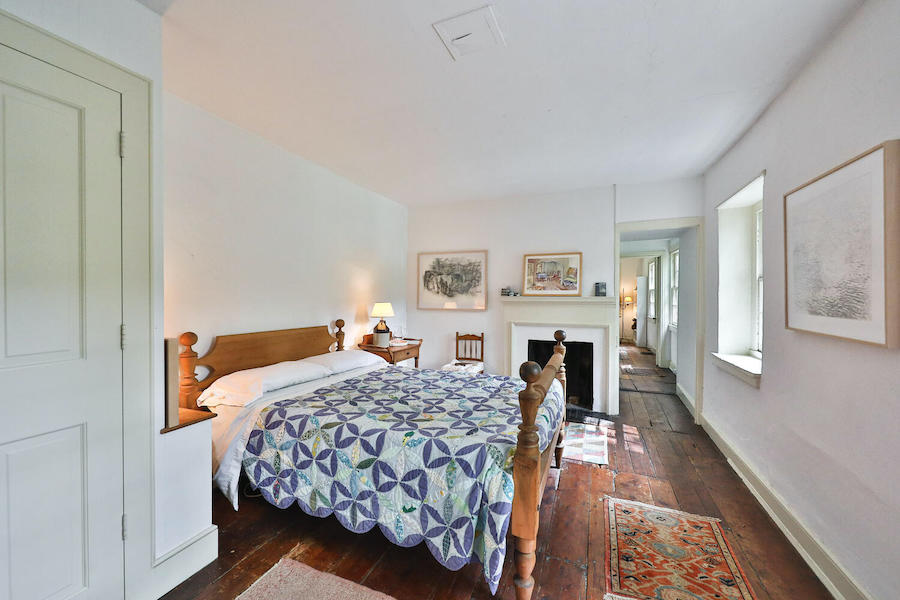 Above it on the second floor is the primary bedroom. 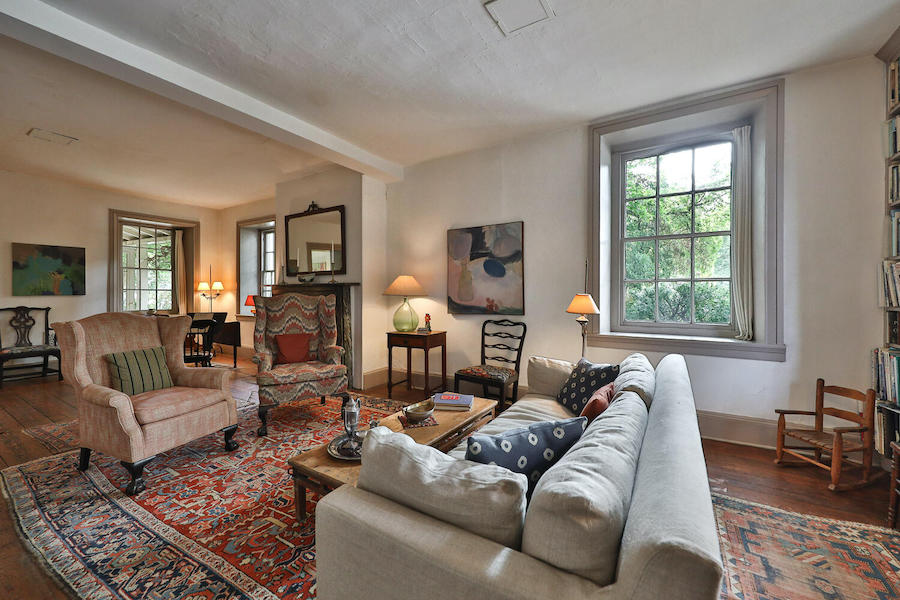 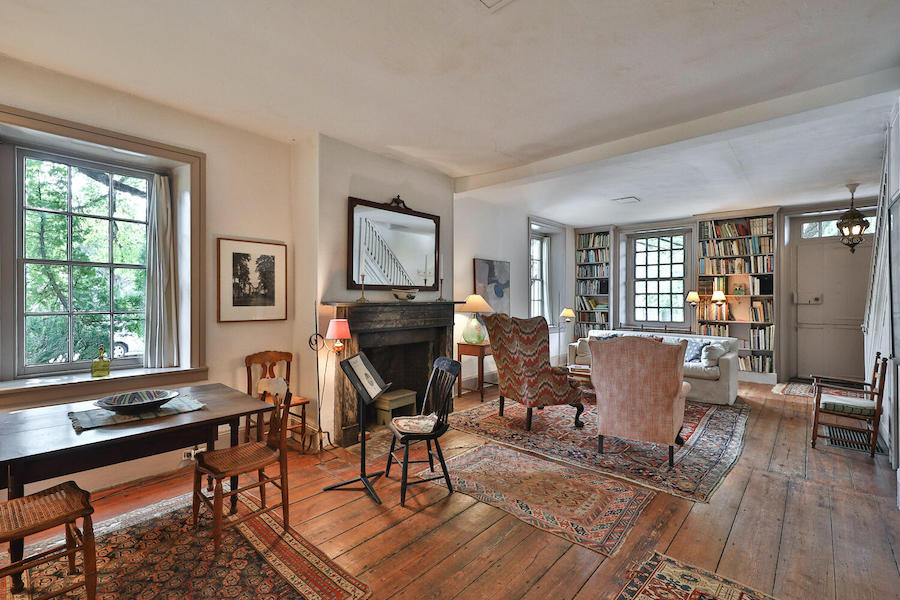 Noted Germantown printer Michael Billmeyer bought the house in 1789 and added its front section to it; his name got attached to it too. That section’s first floor features an unusually large living room created when an interior wall was removed in the 1950s. 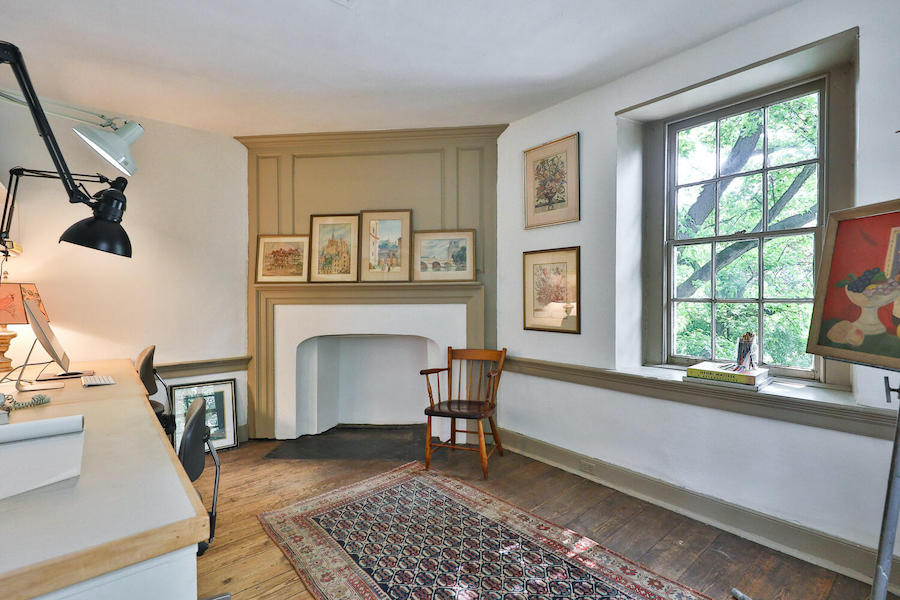 Its second floor contains two rooms. The Vaughans use the room in front, which can serve as a bedroom, as their home office. 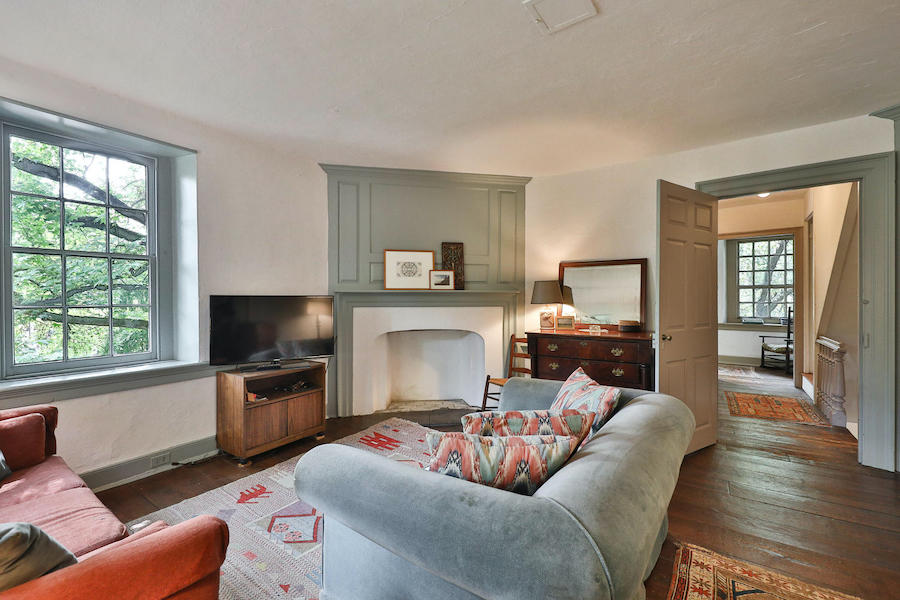 The room in back also served as a bedroom once, but the Vaughans moved their children out of it as they grew, building two new bedrooms on this section’s third floor. It now serves as a home office. 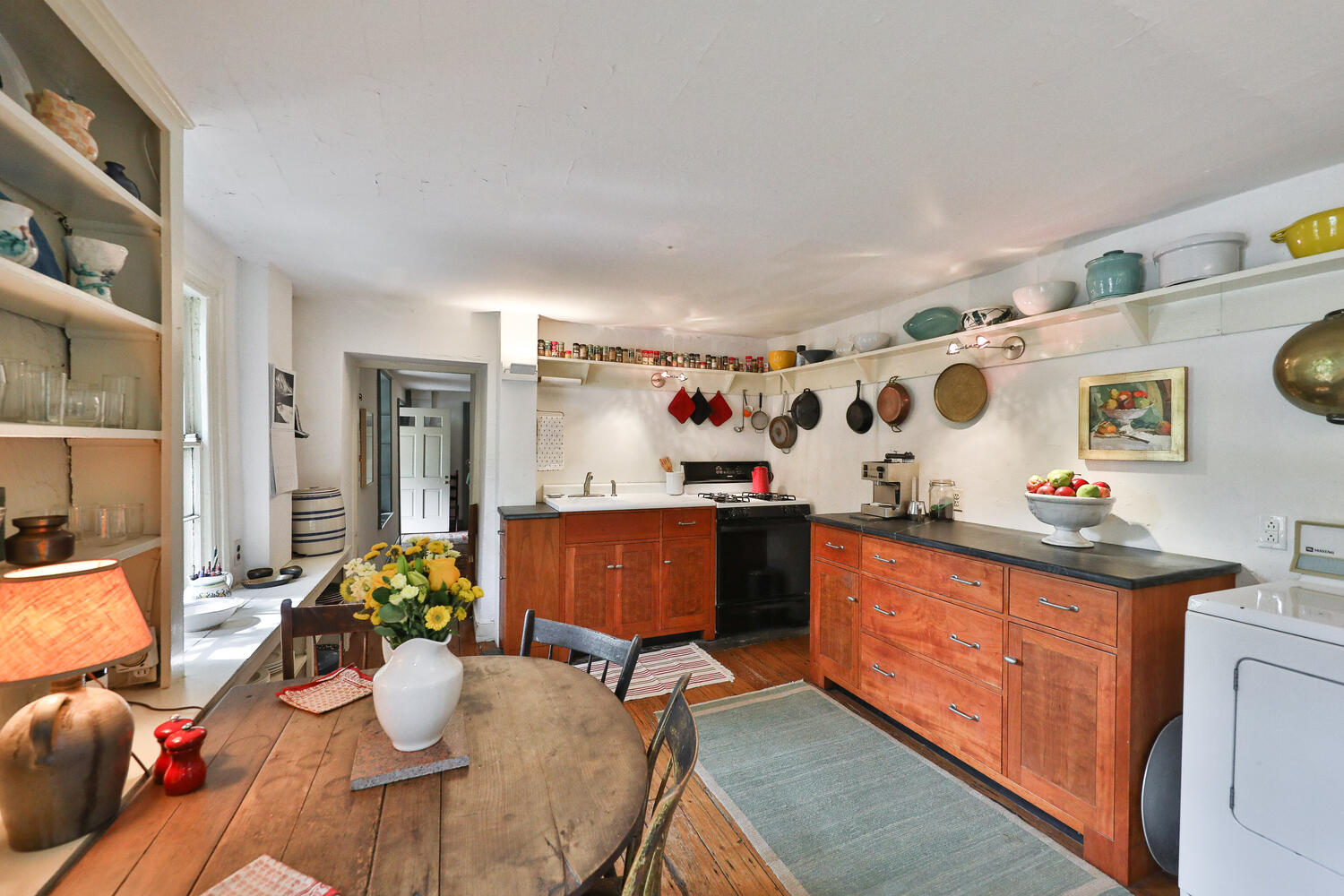 The house’s rear section is its newest part, dating to the 1920s. You’ll find its present-day kitchen on its first floor. That kitchen, which the Vaughans outfitted with soapstone-topped storage cabinets meant to complement the house’s historic style, contains two historic artifacts of its own, namely, the 1960s Maytag washer and dryer that sit in one corner. Yes, they still work, and they only had to call the repairman once or twice. A sixth bedroom sits atop the kitchen and is connected to it by a curved staircase.

“We didn’t really think much of the 18th century” when they bought the house, says David. “We just liked that it was built so well and such a solid building.” Walls of 18-inch-thick Wissahickon schist will do that for a house. 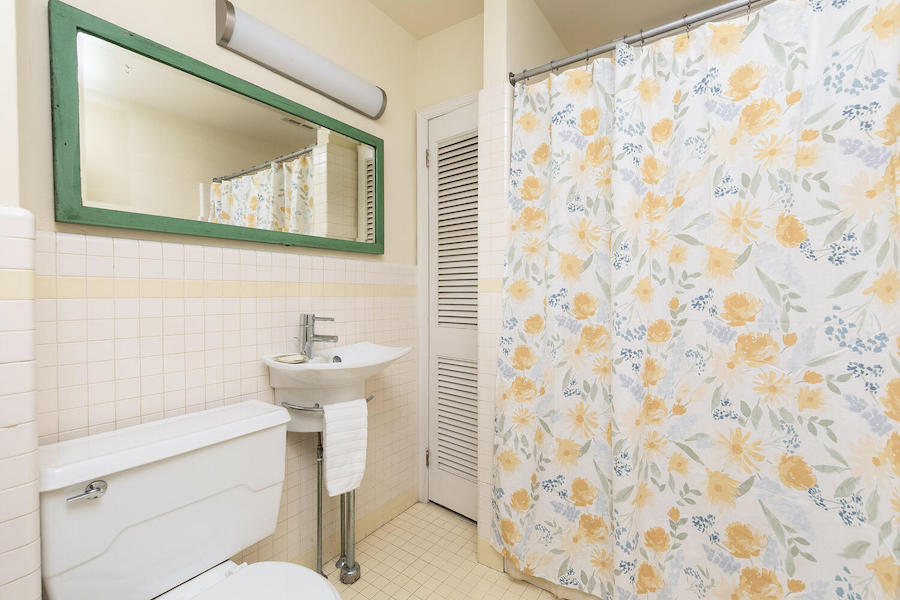 They did, however, bring its appearance more in line with what it probably looked like back then when they repainted the interior wood trim, which had been painted bright shades of red, yellow and blue, a more subdued olive green.

By the way, all the woodwork and doors in this house, including the Dutch door in front, are original, and the doors still have the original hardware.

While they didn’t really muck with much of what you can see in this house, they did work on the things you can’t. One of the first things they replaced after moving in was its leaky roof. They also updated its electrical wiring, leaving only the no-longer-used flush ceiling lights untouched, and its plumbing, which serves not only the kitchen but also its two vintage-1970s bathrooms. It has forced-air heating, so adding air conditioning shouldn’t be a problem if you so desire. 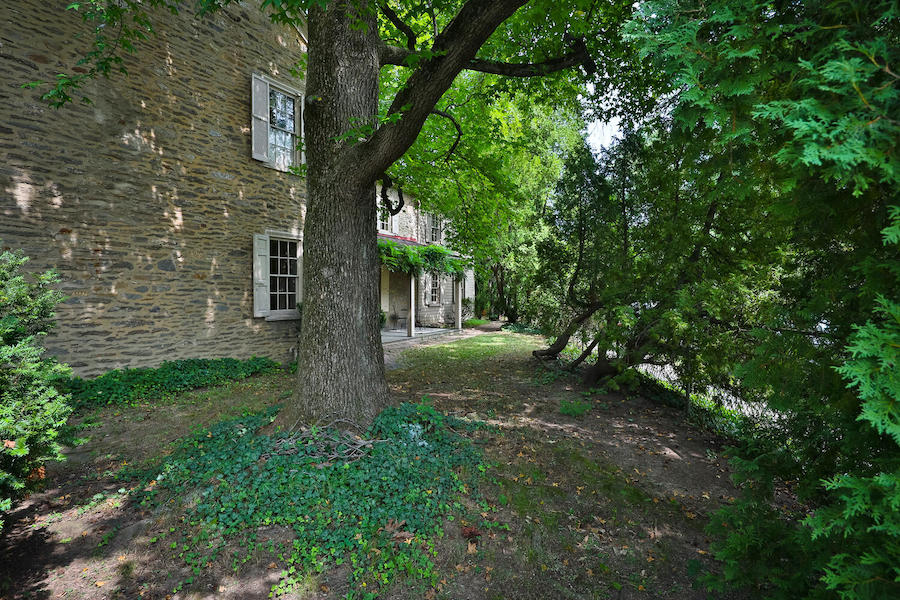 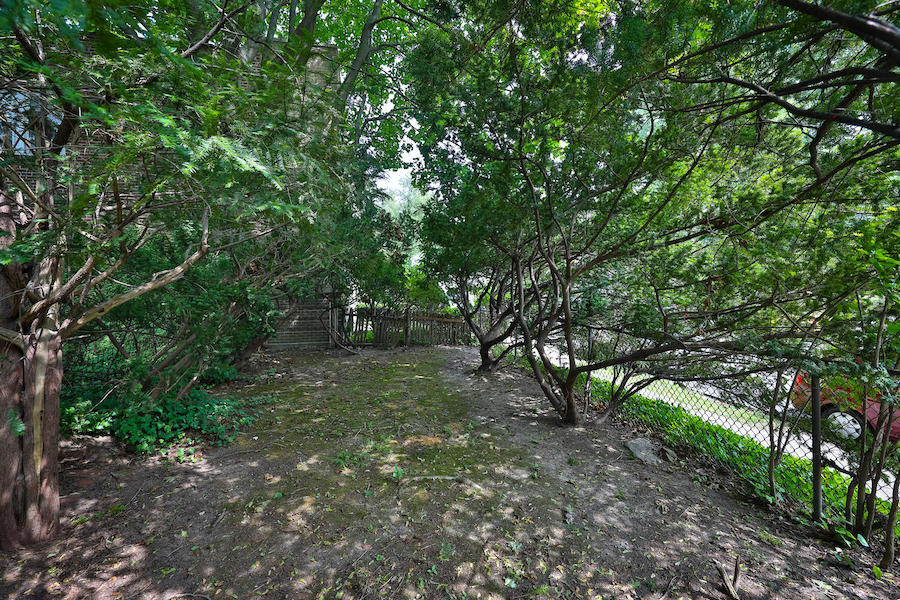 But since this house is well shaded by many trees in its side and back yards, you may not feel the need to air-condition it. The backyard especially has the feel of a green grotto thanks to the yew trees that form a canopy underneath the much bigger maple above them.

If you love history, you should absolutely adore this house. One of the two agents marketing it sure does: he and his wife bought Upsala, another historic house one block south and across the street from Cliveden, and turned it into their private residence after the organization that owned it could no longer afford to maintain it as a house museum.

“That was one reason we were drawn to Alex [Aberle], because of his being a neighbor of ours,” says David. Aberle is the business partner of the listing agent, Kathy Krebs. For what it’s worth, she loves historic houses too.

Upsala and Cliveden are just two of a slew of historic sites within easy range of this house. You can also walk from here to a library, a grocer, several local eateries, an ice cream parlor, and when it reopens for service, Upsal Regional Rail station. Lincoln Drive passes fairly close by, and the Wissahickon Park is a nice hike or a short drive away.

And if you love history, this house is move-in ready. If you would rather do some updating, you can, but be aware that your alterations must conform to historic conservation restrictions. But if you do decide to give its kitchen a makeover, I beg you to consider keeping that washer and dryer.

OTHER STUFF: A curb cut on Upsal Street leads to the backyard, allowing the possibility that a driveway could be installed there.