Built in 1886 as a wedding present, this handsome house has had very good stewards over the years. Its current owners have done especially well by it. 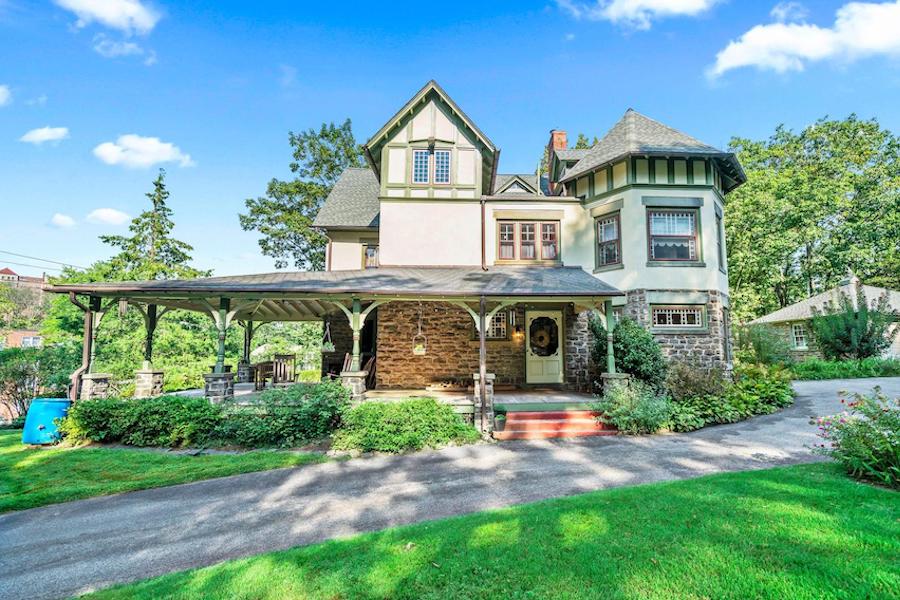 How’s this for a wedding present? This gorgeous confection has been brought into the 21st century in a historically sensitive manner. You’ll find it at 449 W. Stafford St., Philadelphia, Pa. 19144 | Bright MLS images via BHHS Fox & Roach Realtors except where noted

Most of Germantown’s showstopper houses are located in the Tulpehocken Station Historic District in the neighborhood’s northwest corner. But, as readers of this department should have come to know by now, hidden gems can, and do, surface all over the neighborhood, including places you wouldn’t expect to find them.

This historic house actually sits in one of the places where you would expect to find them. But that makes it no less of a hidden gem. 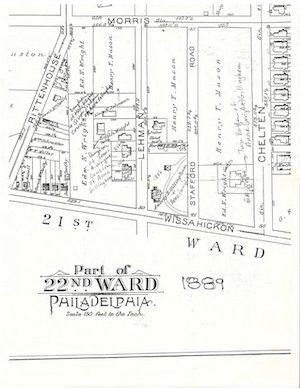 This Germantown Victorian house for sale is hidden because it sits behind a protective ring of greenery on a large lot located on a narrow lane just north of the point where Chelten Avenue ends at Wissahickon Avenue. It’s as far west as you can go and still be in Germantown, and it overlooks the point where Lincoln Drive enters Wissahickon Park.

It also happens to be one of the first houses built in its neighborhood of West Chelten. Edward N. Wright, a well-to-do member of a Quaker family that owned a shipping company which eventually grew into the Atlantic Richfield Company, bought most of the land that would become that neighborhood in 1872. Wright’s purchase became more valuable when, in 1884, Henry Howard Houston opened the Philadelphia, Germantown and Chestnut Hill Railroad just to its east. Houston, who owned land closer to the rail line, built a station where it crossed Chelten Avenue, and development soon took off. 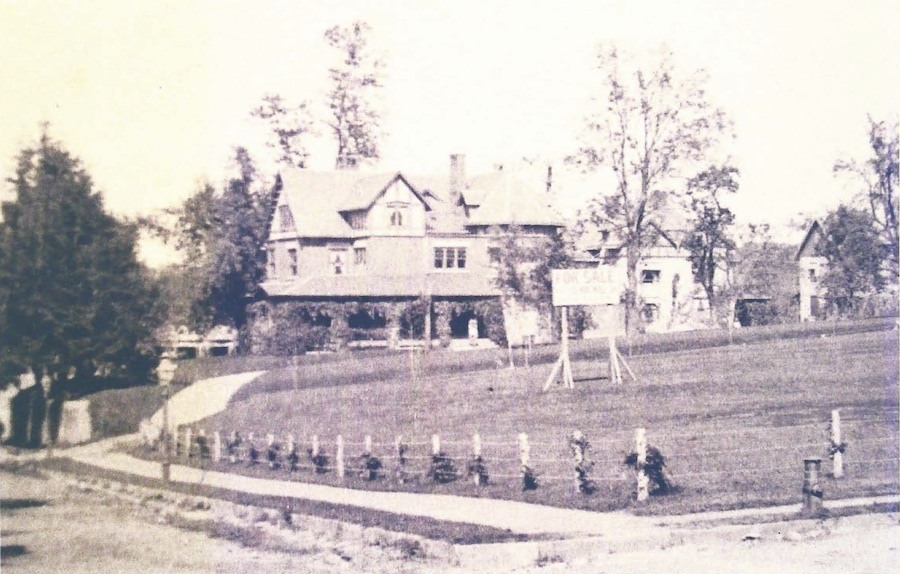 449 W. Stafford St. as it appeared around 1890 | Collection of James Domenick and Katherine Clupper

Wright built this house in 1886 as a wedding gift for his daughter Anna, who had married a real estate investor from Evesham, N.J., named Aubrey H. Gillingham. The Gillinghams didn’t call this place home for long; they set its barn off as a separate lot in 1894, then sold both lots and moved back across the Delaware to Moorestown.

A Center City real estate broker named David Dallam and his wife succeeded them. The Dallams used this house as their summer residence until 1924; Mrs. Dallam was known throughout Germantown for her grand lunches. After that, this house passed through four other owners before it landed in the hands of its current owners, James Domenick and Katherine Clupper, in 2000. 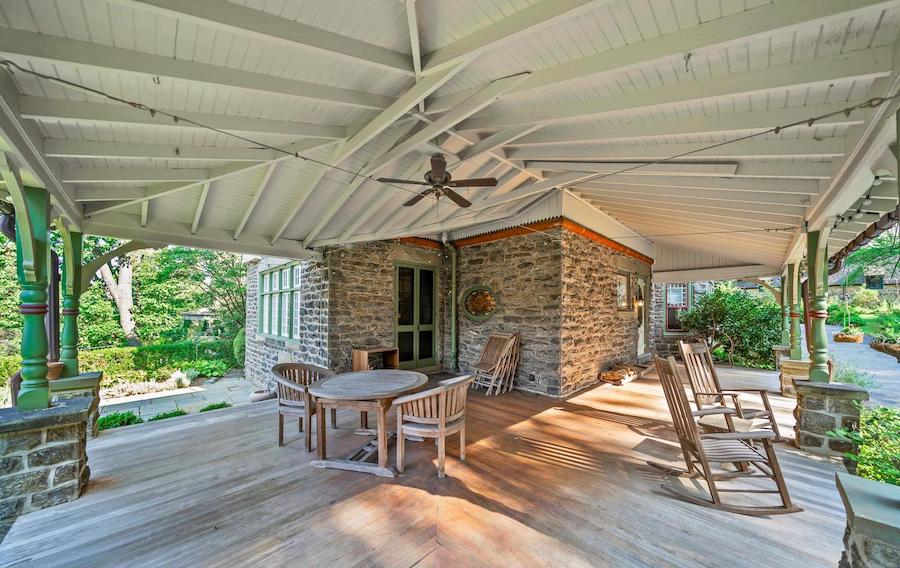 What you see here is the fruits of the couple’s labors. They undertook a major renovation of the house, updating all its systems as well as its kitchen and bathrooms. 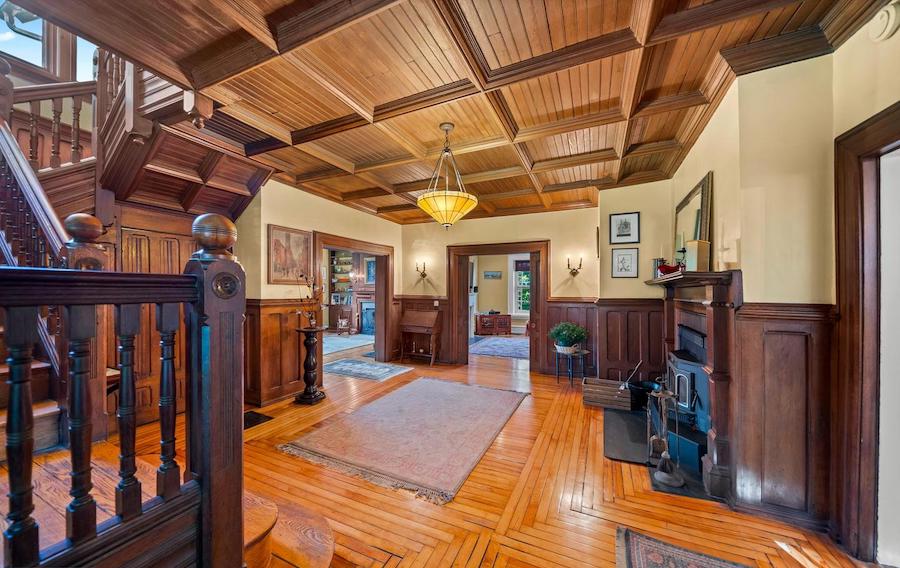 And didn’t they do a great job of updating it?

“We have done a lot of renovations to the house, but it looks very much the same as it did when built,” Clupper explained in a comment on the “Changing Germantown” Facebook group. 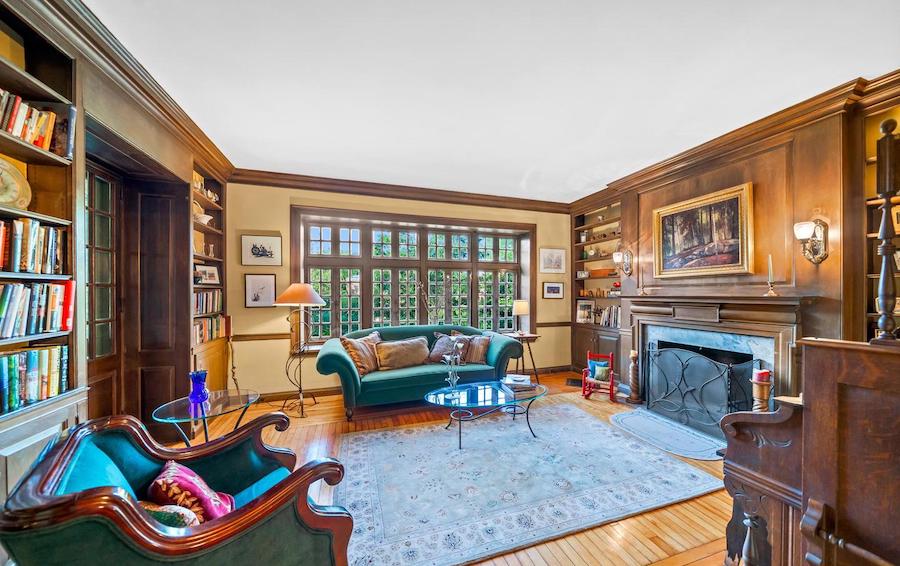 That means that most of what you see in these pictures is original: The wraparound front porch, the coffered ceiling and inlaid floor in the foyer, the many fireplaces, the built-in bookshelves in the library/family room, the built-in china closet in the dining room. 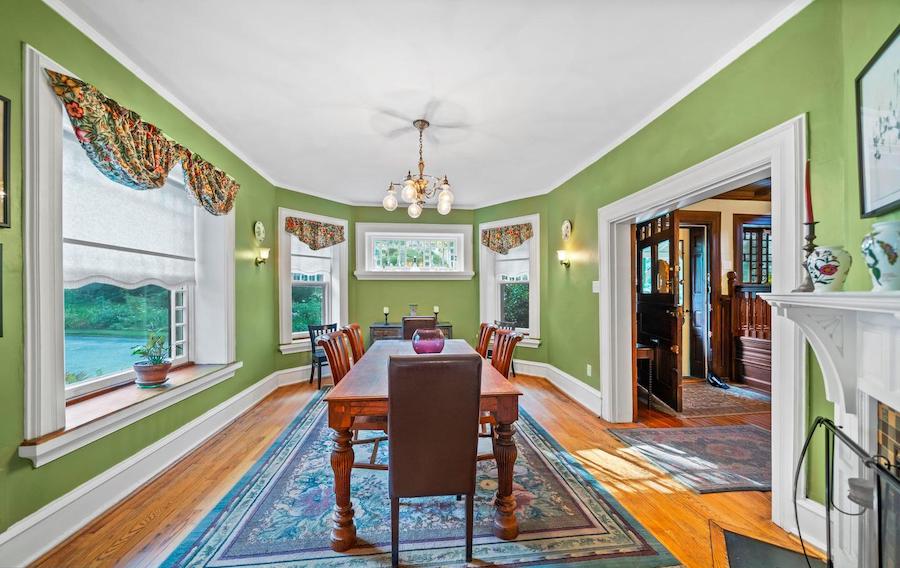 The two major exceptions to this rule are the kitchen and the bathrooms. 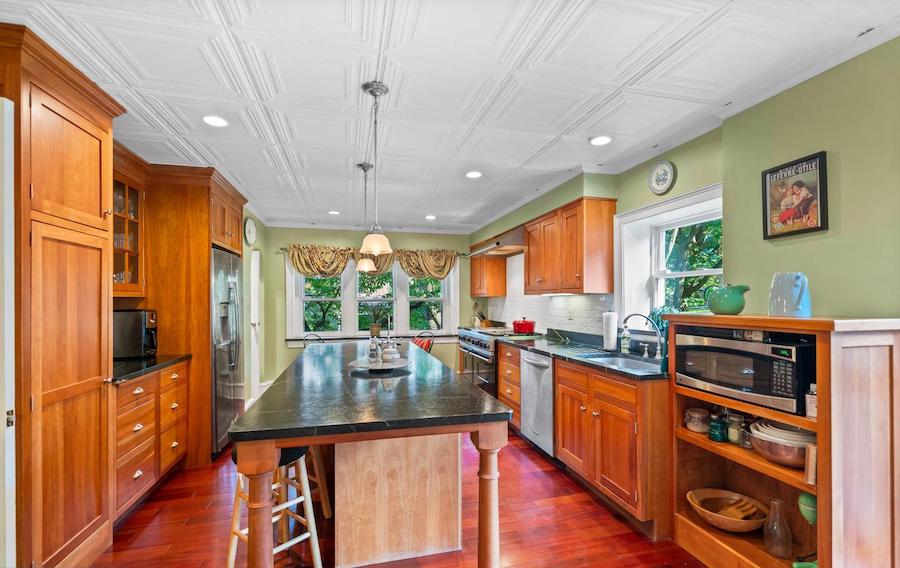 The kitchen got a major upgrade in 2004 that brought it into the 21st century while respecting the house’s strong bones. 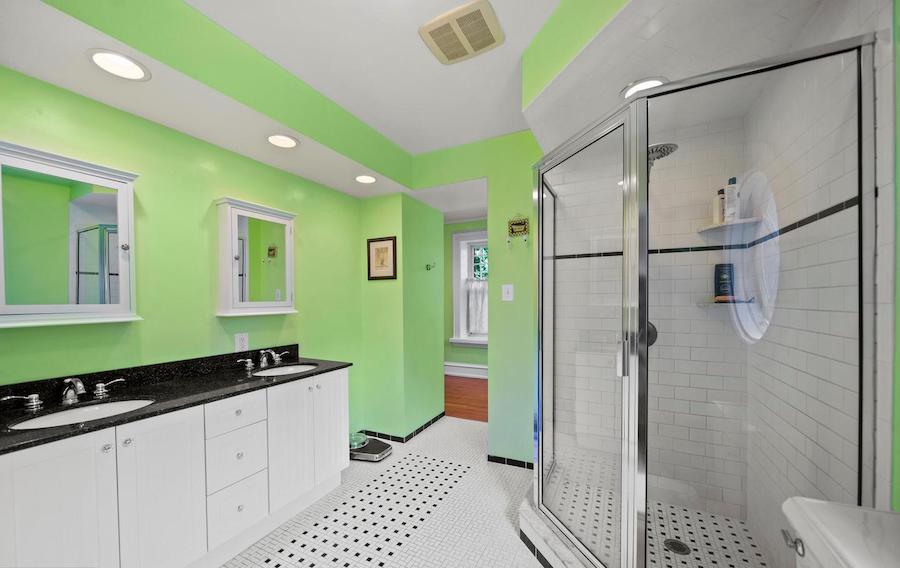 The bathrooms got modernized as well, but fortunately, not too modernized: as you can see from both the primary bathroom and one of the other two full baths, Clupper and Dominick went for the classic look of the 1920s through the 1940s. 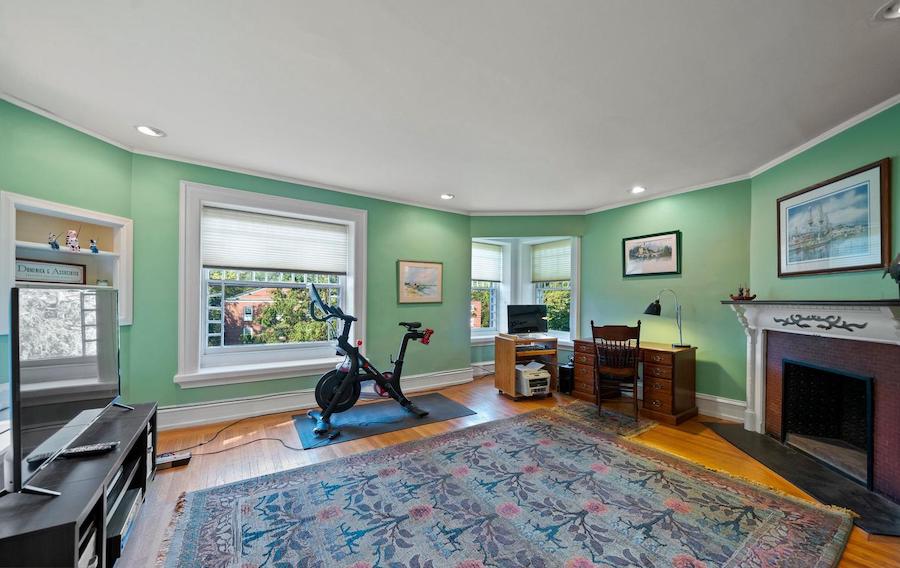 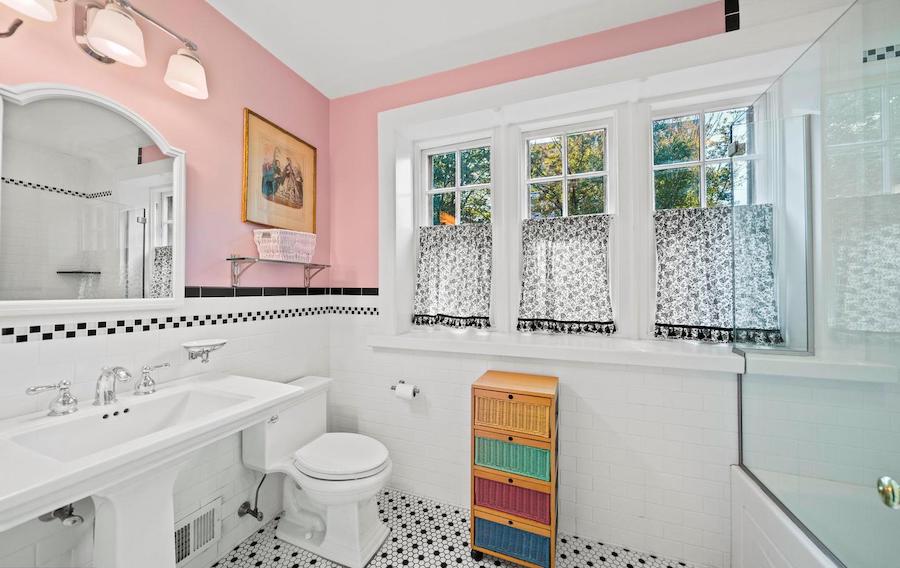 Then there are the Technicolor walls. They channel this house’s sensibility beautifully, but the palette is softer and lighter than one finds in many Victorian houses.

This Germantown Victorian house for sale has plenty of room for a large family: It has six bedrooms, one of which currently serves as a home office. Its dining room can seat 12 people comfortably. It has a large great room on the third floor that could be put to any use you like, plus a smaller bonus room that could serve as an au pair or in-law suite. And in its basement you’ll find a temperature-controlled wine cellar. 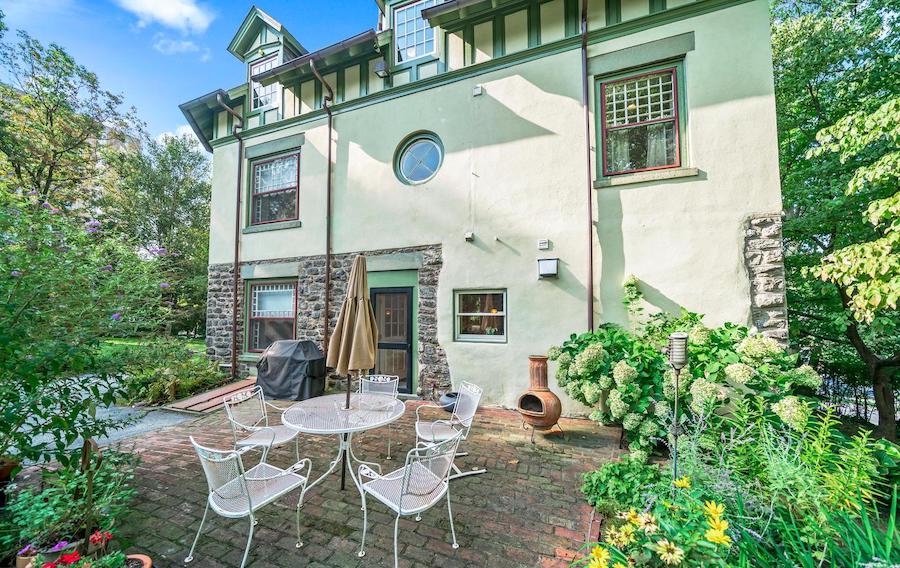 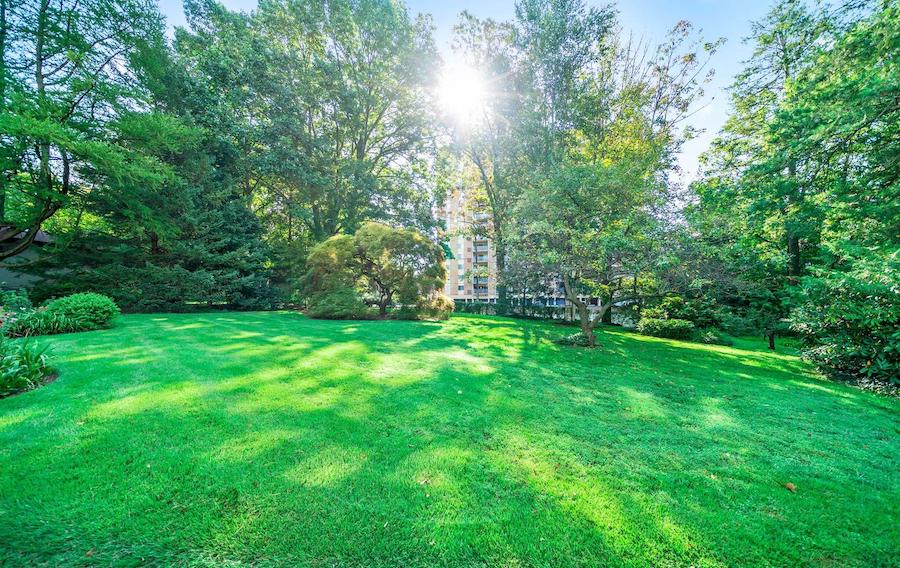 It has an attractive stone patio in back and a large grassy lawn in front. Trees ring its half-acre lot to ensure privacy.

Yet this secluded jewel also sits in a very convenient location. Chelten Avenue Regional Rail station* is a very short walk away, as is historic Rittenhouse Town and access to the Wissahickon Park trails. The local full-service supermarket, three blocks away, has the best wine and beer selection of any grocer in Northwest Philly, and there’s one of those no-frills, deep-discount grocers in the strip mall next to the train station. If you must drive, this house also has a two-car garage, and its location just three blocks from Lincoln Drive means you have access to three different commuter routes into Center City.

*We look forward to service returning to the Chestnut Hill West Line someday.