What makes this Cape Cod different from all the others? For starters, there’s its unusual split-level layout. And it gets better from there. 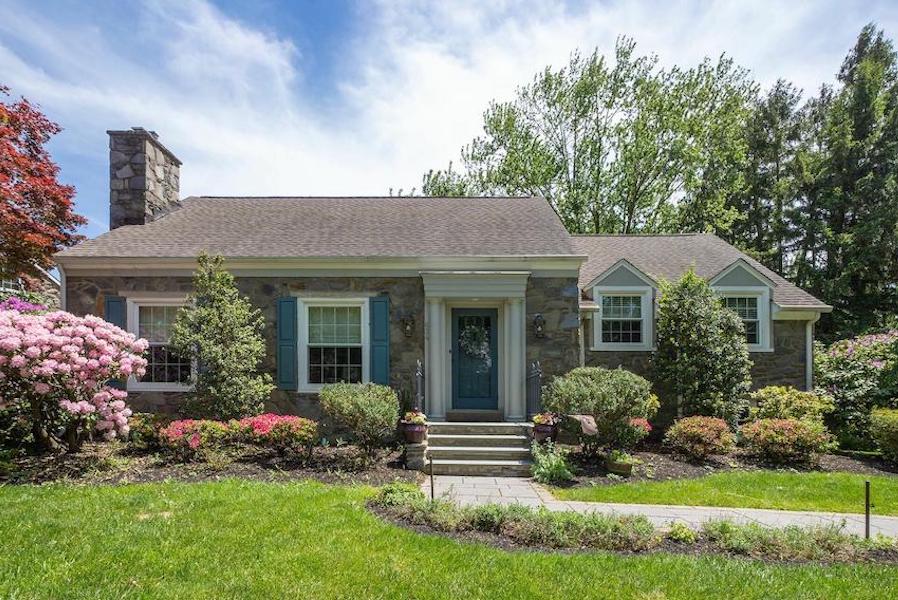 The 1950s were the decade when the America we know now began to emerge. Television was still new, the drive for racial equality picked up steam, and the automobile opened up vast swaths of land on the outskirts of American cities to developers who studded them with houses for families eager for a house with a yard where their kids could play.

While many of those families were settling down in assembly-line suburbs like the Levittowns, others were occupying more traditionally crafted, styled and built houses. Those on the cutting edge, meanwhile, hired rising-star architects to produce sleek houses inspired by that American-born European import known as modernism.

Modernism made its way into the suburbs in other ways as well. It showed up in new house styles with low-slung profiles and wider windows, like the ranch house and the split-level.

Which brings us to this unusual Cape Cod house in Havertown. The Cape Cod house, also known as the “saltbox,” is one of the most popular house types in the country. Simple in appearance and efficient in layout, the Cape Cod was a popular “starter house” type in the 1950s, found both in and beyond those Levittowns. 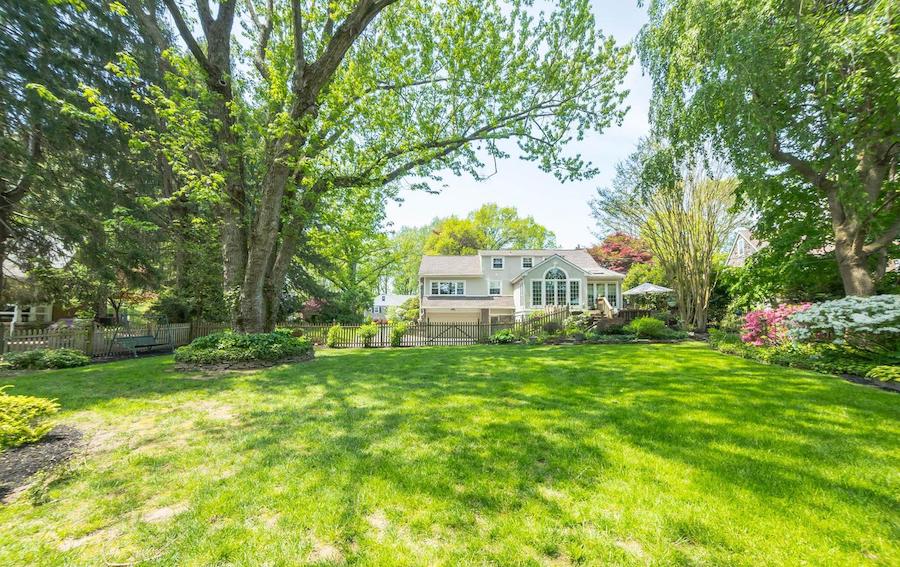 What makes this stone Cape unusual? Its split-level design, that’s what. This Havertown split-level Cape Cod house for sale combines a beloved traditional house type and one of those modern innovations. It also has another modern innovation in a wing added onto its rear.

Between the split-level design and the addition, this house offers plenty of space to accommodate both your family and your stuff on an equally large sylvan lot. 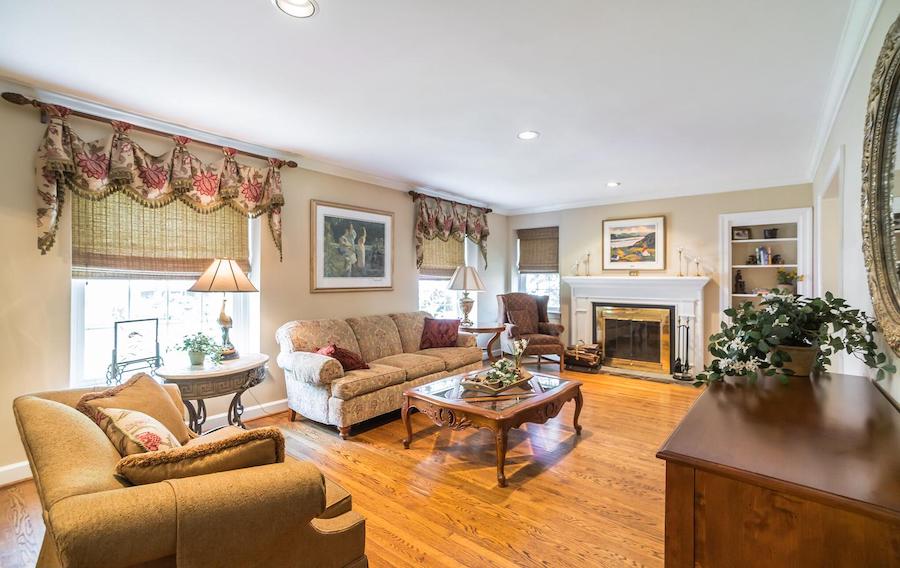 Because it’s a split-level, the front door is not symmetrically placed as it is on most Capes. The spacious living room stretches across the front of the main floor, graced by a fireplace and recessed lighting. Deep windowsills and a built-in bookcase tie this room into the Colonial tradition expressed on this house’s exterior. 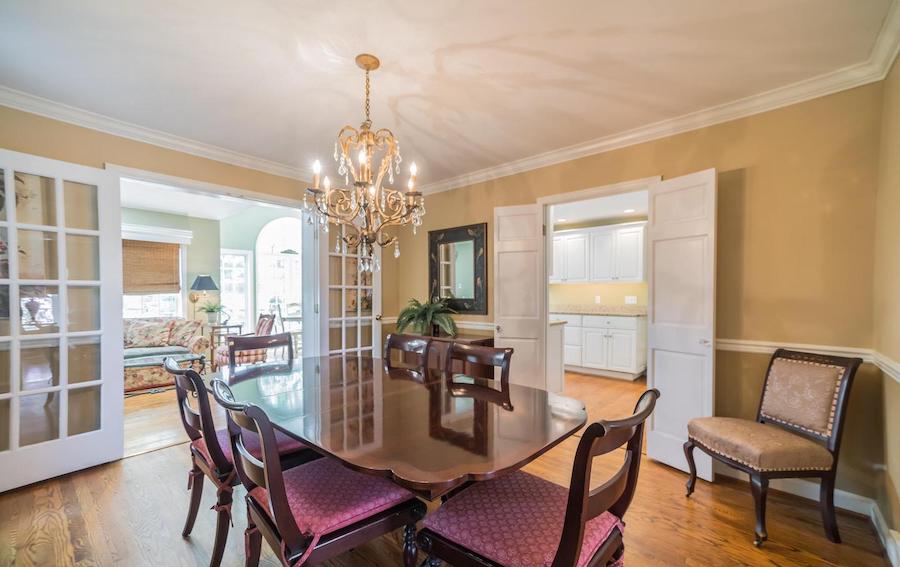 The formal dining room behind it exudes 18th-century charm and style. French doors lead to a sunroom while a third door leads to the original house’s kitchen. 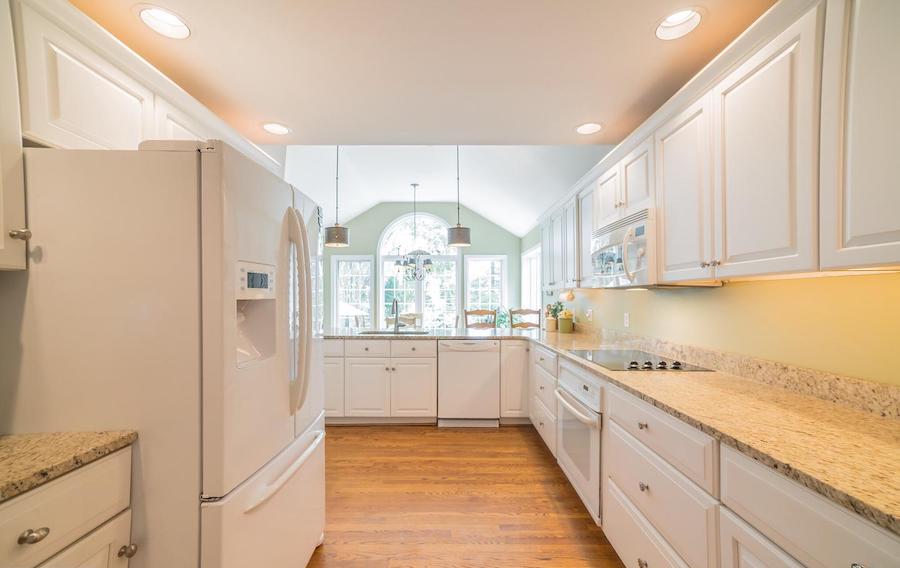 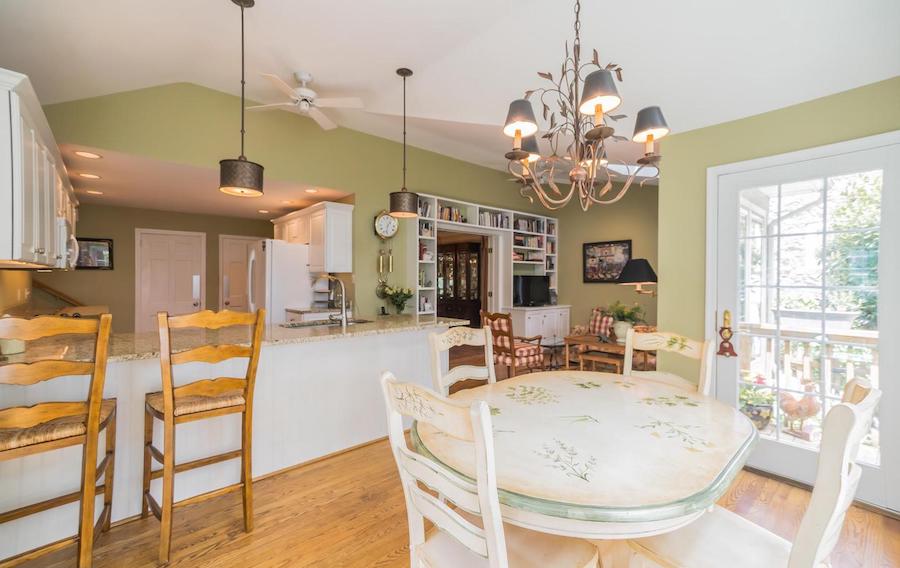 That kitchen was smaller than the one you find now. A vision in white and nicely equipped, it became part of this house’s other modern feature, the everyday living suite, when an addition was tacked on to the back some years after this house was built in 1955. 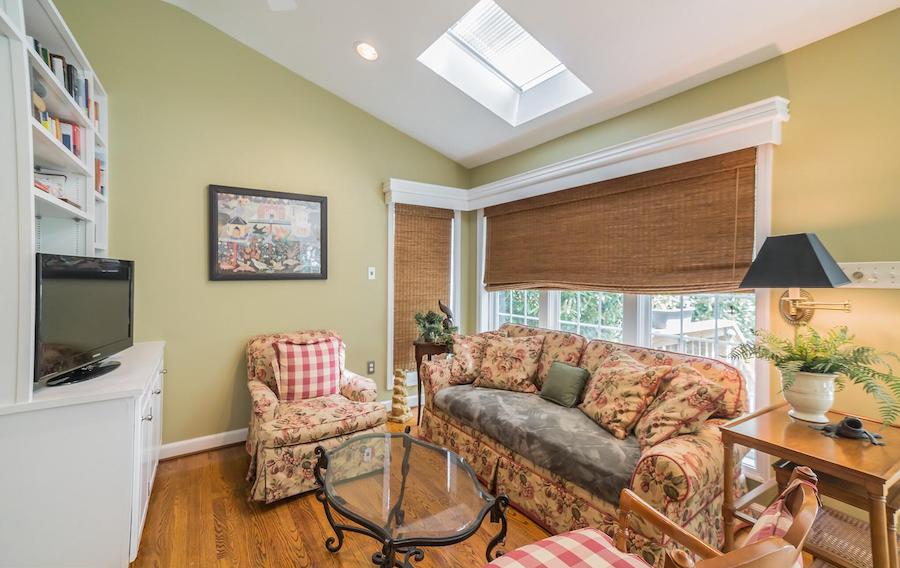 The other elements of the suite are a skylit den with built-in shelves and a cathedral-ceilinged breakfast room. 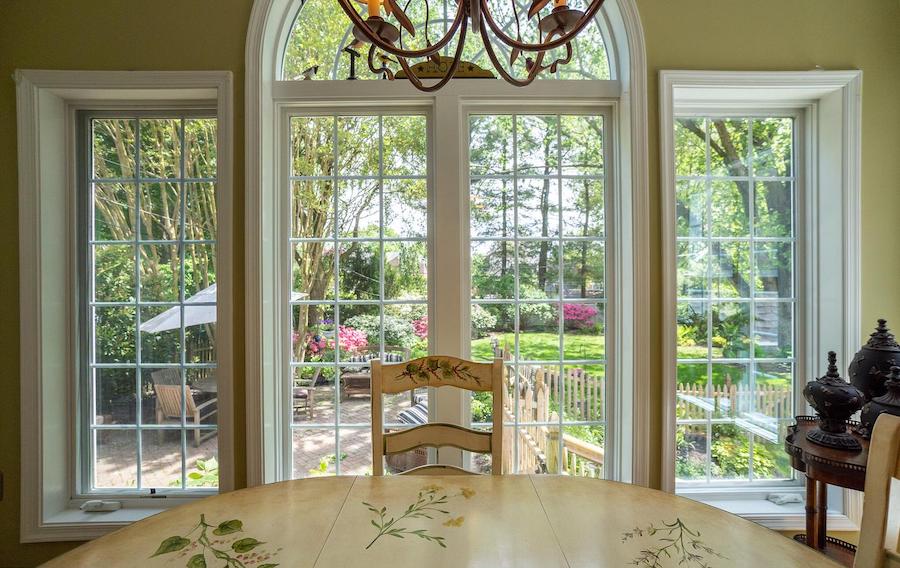 VIew of patio and backyard through breakfast-room window

The breakfast room’s Palladian window gives you a great view of another of this house’s nice features: its attractively landscaped backyard. 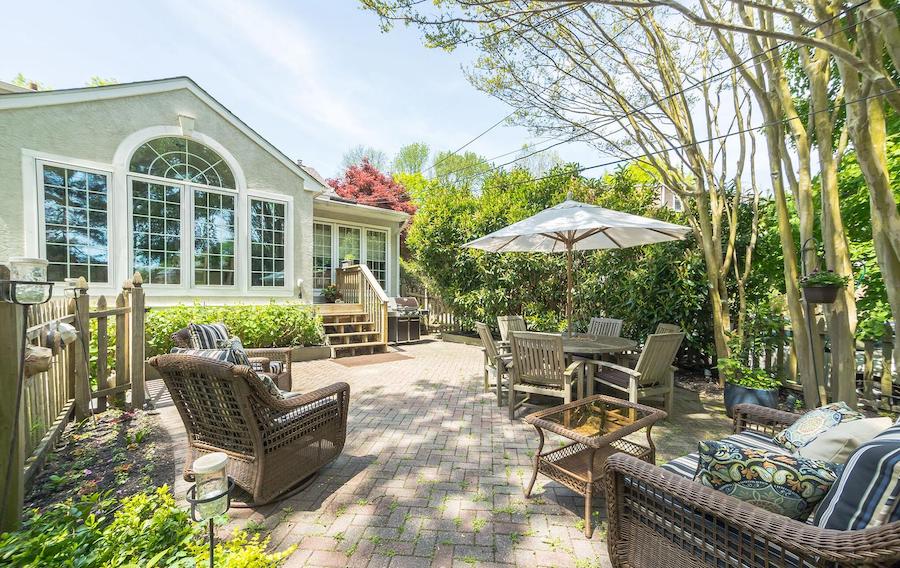 A terraced brick patio occupies the space between the breakfast room and the grassy part of the yard. 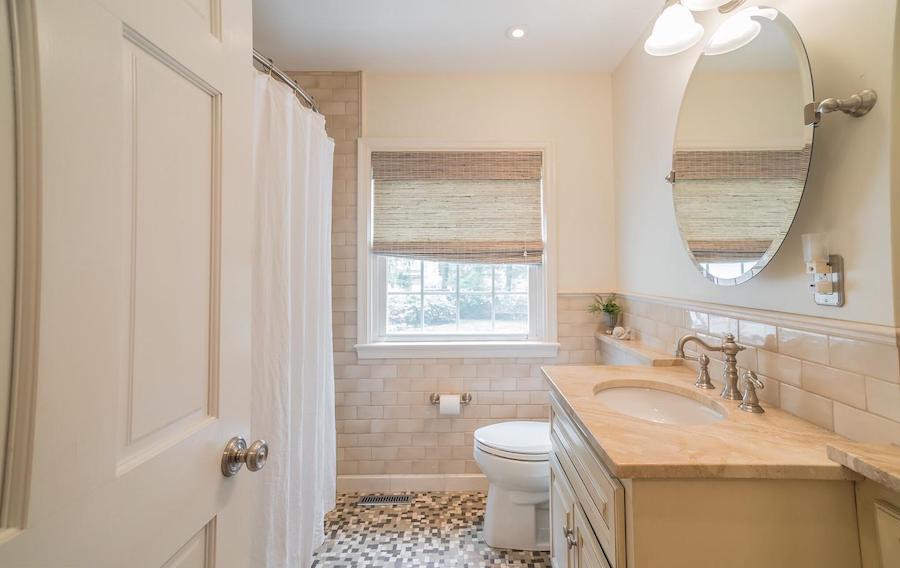 On the middle level you’ll find two bedrooms and a hall bath. The bath on this level got updated in a turn-of-the-20th-century manner with vintage subway tile wainscoting and plumbing fixtures. 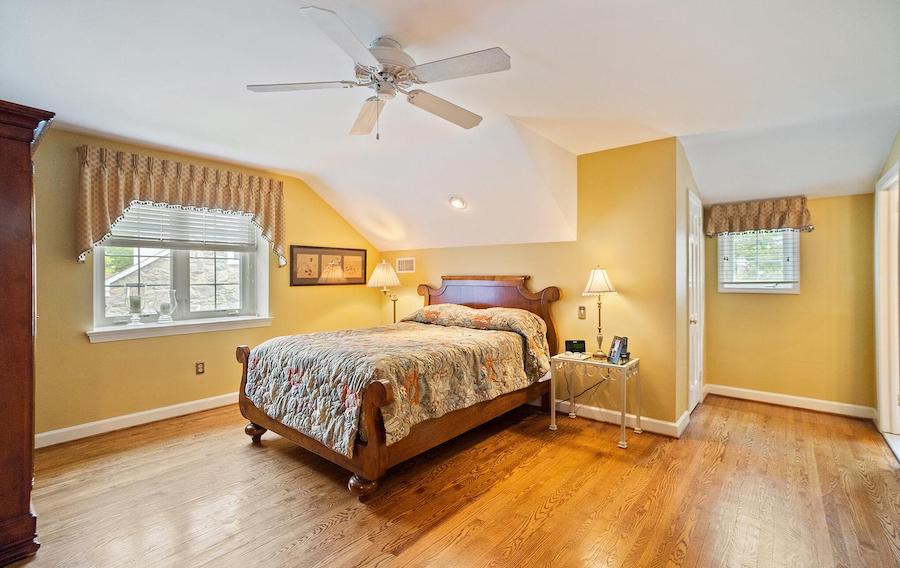 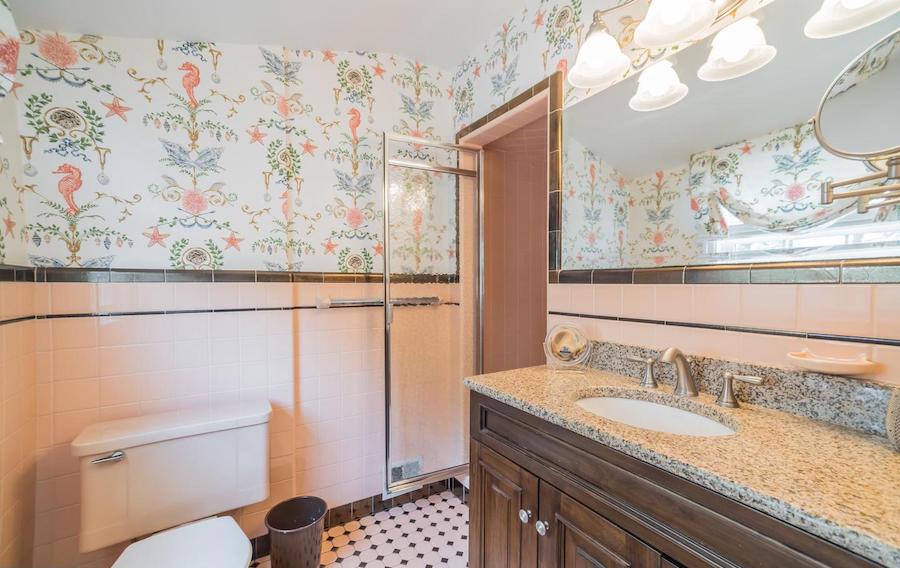 Up top is where the master suite resides. It has a spacious bedroom and a bath that retains its original 1950s tilework and built-in shower stall but has newer plumbing fixtures. 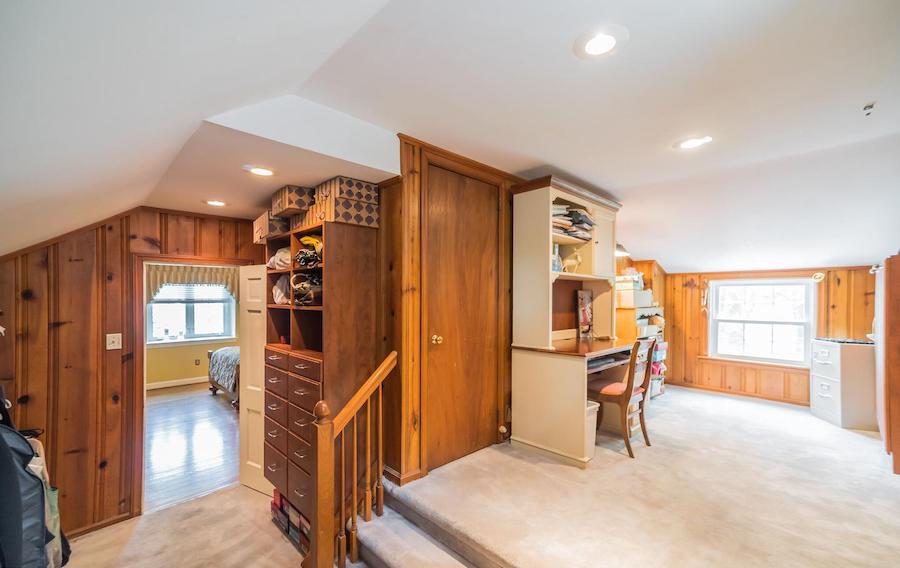 It also has a huge walk-in closet with a home office or crafts space. 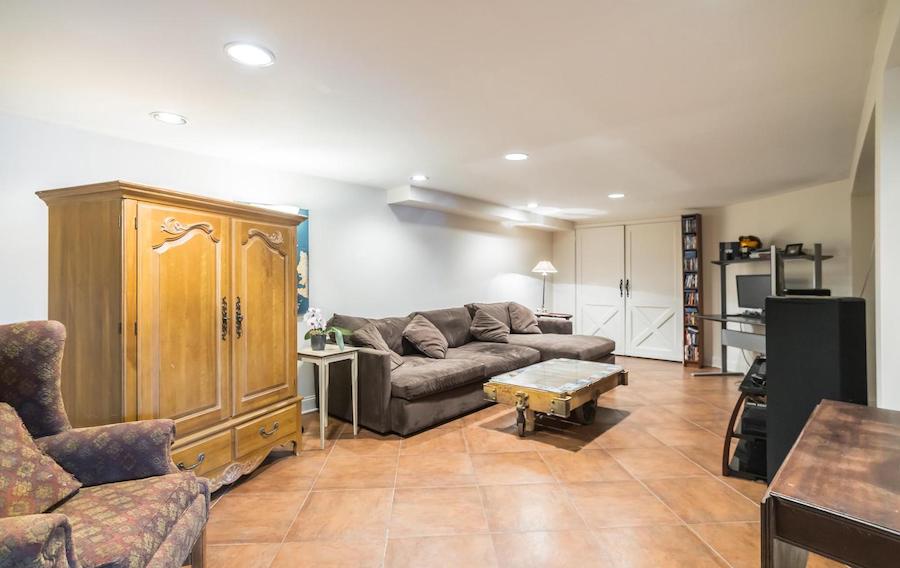 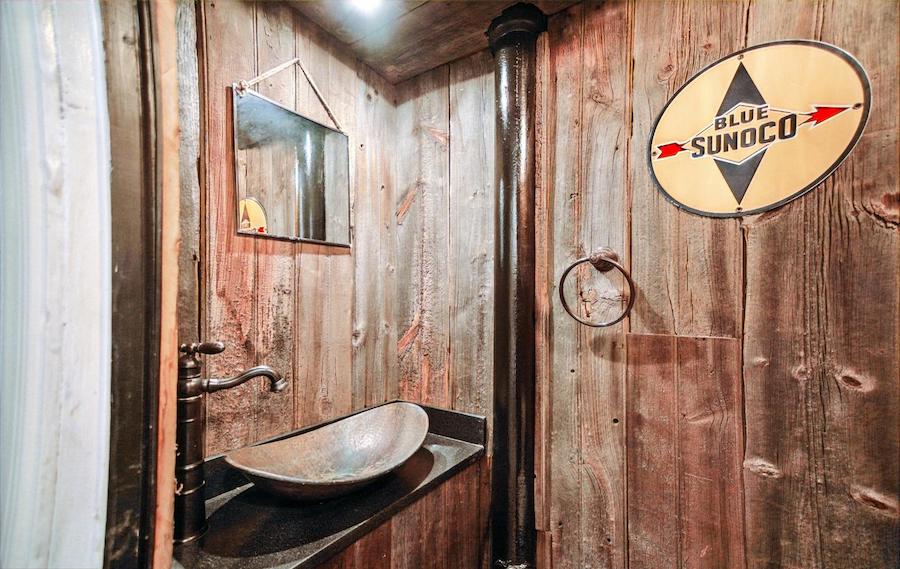 The owners got really creative, however, in redoing the powder room next to the basement rec room. Reclaimed wood and a copper sink give this room a truly rustic feel.

And there’s more storage space in both the unfinished basement laundry room and the attic over the second-floor bedrooms.

Given everything this attractive, nicely outfitted Haverford split-level Cape Cod house for sale offers, you probably won’t mind the driving you’ll need to do to get to neighborhood shops, Ardmore’s lively town center, businesses along nearby West Chester Pike and the nearby Blue Route interchange.

Style like yesterday, design and amenities for today, room for tomorrow: this hybrid modern traditional house has all the bases covered.