A First Look at the New Canopy Hotel

The next phase of the East Market development to open should make visiting travelers feel right at home in the neighborhood. 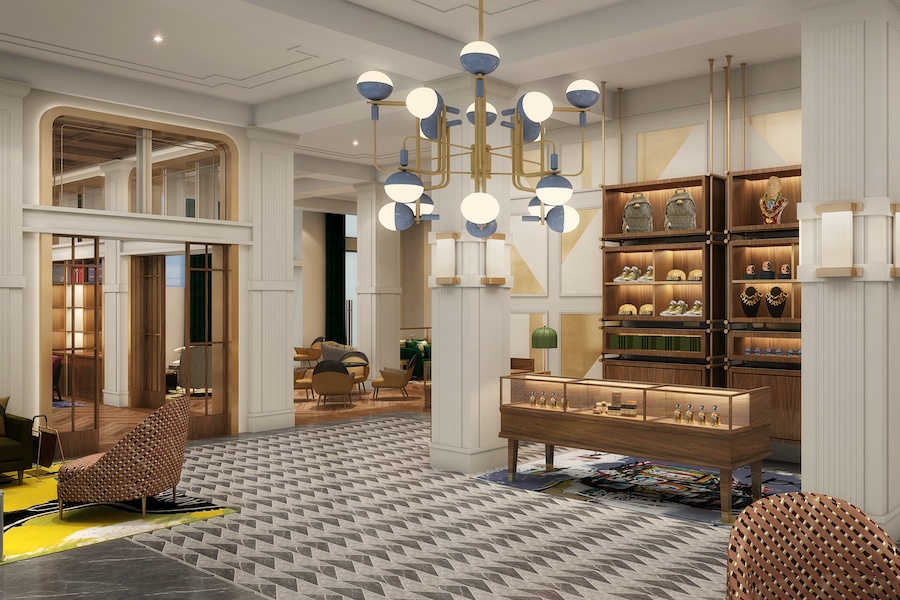 Looking for a place to stay that offers the unique character of a boutique hotel and a chance to earn loyalty points on your chain’s frequent-traveler rewards program?

If you belong to Hilton Honors, you’re in luck if your travels take you to Philadelphia. Or will be come May 29th.

That’s when the Canopy by Hilton hotel opens in the historic Stephen Girard Building at 21 S. 12th St.

A global chain of local hotels

The Canopy Philadelphia Center City Hotel is one of 20 properties Hilton plans to open under its upscale boutique nameplate this year. Canopy’s global head, Gary Steffen, describes the chain thusly: “It’s a boutique hotel with the power of Hilton behind it. The hotels are focused on great neighborhoods, with design derived from those neighborhoods and an independent-hotel feel.” In Philly’s case, that neighborhood is East Market Street and neighboring Midtown Village.

The idea is to give each Canopy hotel a local feel and flavor. Daniel Killinger, head of East Market developer National Real Estate Development, says that meshed very well with his company’s own vision for the East Market project.

“We established our vision for East Market five years ago,” he says. “And we had our eye on the Stephen Girard Building being the center of the development and in many ways being the living room of the neighborhood.”

The legacy of a famed financier’s estate 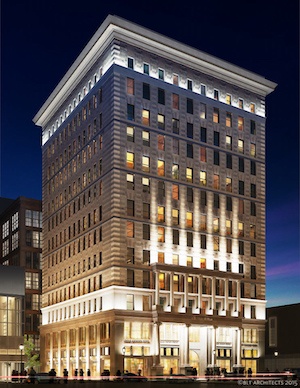 The Stephen Girard Building, renovated to house the Canopy hotel

Designed by James Hamilton Windrim, the Stephen Girard Building never housed the famed financier, who died 65 years before it was built in 1896. What it did house was the offices of the Directors of City Trusts, the city agency that managed the assets of Stephen Girard’s considerable estate. Those assets included the block on which it sits, known then as Girard Square; Stephen had acquired it to house his school for orphaned white boys, Girard College. The Board of City Trusts opted to build the school in an outlying neighborhood and develop the in-city block commercially instead.

After the board decamped for the new Lafayette Building in 1908, the building housed a succession of commercial tenants. It had been threatened with demolition by the firm that originally leased the Girard Square block from the estate before National Real Estate Advisors and its development affiliate arrived on the scene.

The vision National Development had for the Stephen Girard Building made a hotel an ideal choice for filling it. Killinger says that National Development considered several possible affiliations for the hotel but kept coming back to Canopy. “What’s compelling to us is how Canopy works the neighborhood into each property,” he says. “The brand is strong, but it gives great liberties to the developer” to shape the hotel around its setting.

To create that local feel inside, project architect BLT Architects turned to AvroKO, an international design firm specializing in hospitality facilities. The design AvroKO produced includes spaces that reference the Classical and Beaux-Arts elements of the Stephen Girard Building. And it also includes decor that channels the Snellenburg’s department store, which gradually surrounded the building site from 1889 until 1962.

One other element of the design calls out not so much the neighborhood itself so much as it does a style that influenced the way Philadelphians look: the “Big Fashion” look of 1980s hip-hop culture, reflected in the bold colors and geometric patterns found in the guest-room furniture and carpeting.

A king-size guest bedroom in the hotel

That local emphasis will extend to the hotel’s operations. “We not only talk about neighborhood focus, we bring it into all the guest touching points,” says Steffen. “We offer welcome gifts that come from local businesses. We will do an evening tasting with offerings from the neighborhood, where Dan’s managers will work with local providers to prepare craft cocktails and special dishes.”

Those tastings will more than likely take place in either the bar or the hotel’s restaurant. Steffen says they’re not ready to announce what the restaurant will be called or who will run it, but he did say that it would “absolutely be an appropriate neighborhood gathering place as well.” And in noting where Stephen Girard came from, he hinted that it might have a dash of French flair.

Killinger says the hotel is on schedule for a May opening, and Hilton is now taking reservations for stays starting May 29th. Currently, Canopy operates 14 hotels worldwide in places as varied as Reykjavik, Sao Paulo, Cancun, Dubai, Huangzhaou and Zagreb. Hotels in the United States include Washington, Minneapolis, Columbus, Dallas, Atlanta, Portland, Ore., and Ithaca, N.Y.