On the Market: Welsh Manor in Haverford

Designed by one noted architect as the home for the children of another, this hillside house combines English country charm with unfussy elegance. 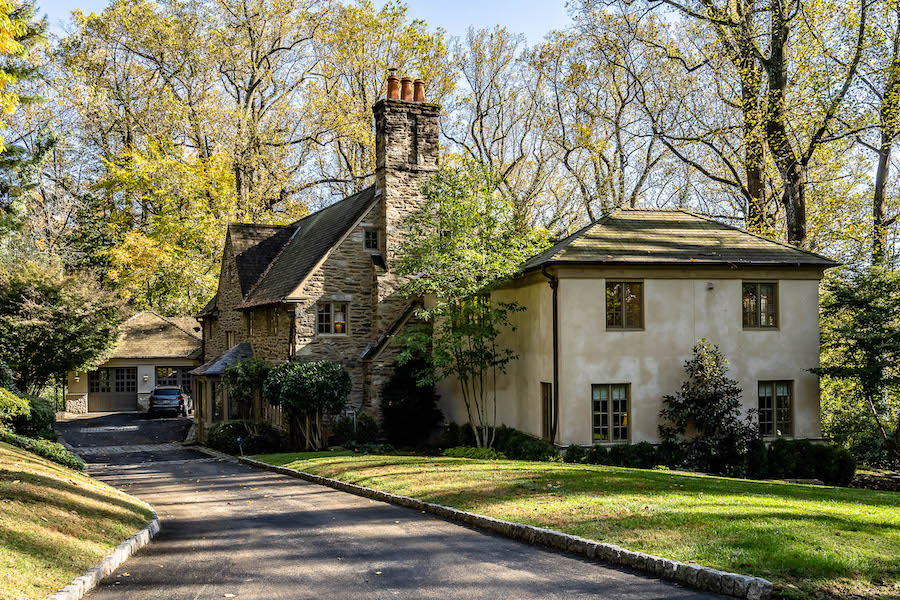 This charming house for sale in Haverford has many stories to tell. Buy this house from its current owner and you might get the chance to hear them.

Griffith is the third owner of this handsome house on a private lane in the Lower Merion Township portion of Haverford. Evans grew up in it. 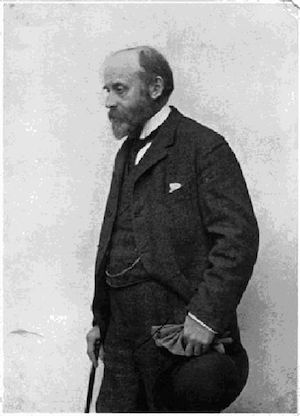 Evans was the less-famous-but-no-less-talented partner of famed Philadelphia architect Frank Furness; after working as a draftsman in the great architect’s first partnership, Furness & Hewitt, he rose to become Furness’ partner, forming Furness & Evans in 1881 and Furness, Evans & Company five years later. Evans’ best-known buildings are the Merion Cricket Club’s Haverford clubhouse (1896) and the 1907 Greek temple at Broad and Chestnut that housed the Girard Bank for many years and now houses the Ritz-Carlton Hotel.

This house and the cricket club both sit on parts of a more than 100-acre tract of land Allen Evans’ father, Edmund Cadwalader Evans, purchased to the northeast of Haverford Station after the Civil War. Other Evans relatives lived in some of the houses adjacent to this one on Evans Lane. Other parts of the tract were sold to Pennsylvania Railroad president Alexander Cassatt, who incorporated them into the community of Bryn Mawr.

In short, this house in many respects sits at the heart of the Main Line. Literally, in a sense: You can walk from it to Haverford Regional Rail station, the Merion Cricket Club, downtown Ardmore and Suburban Square. 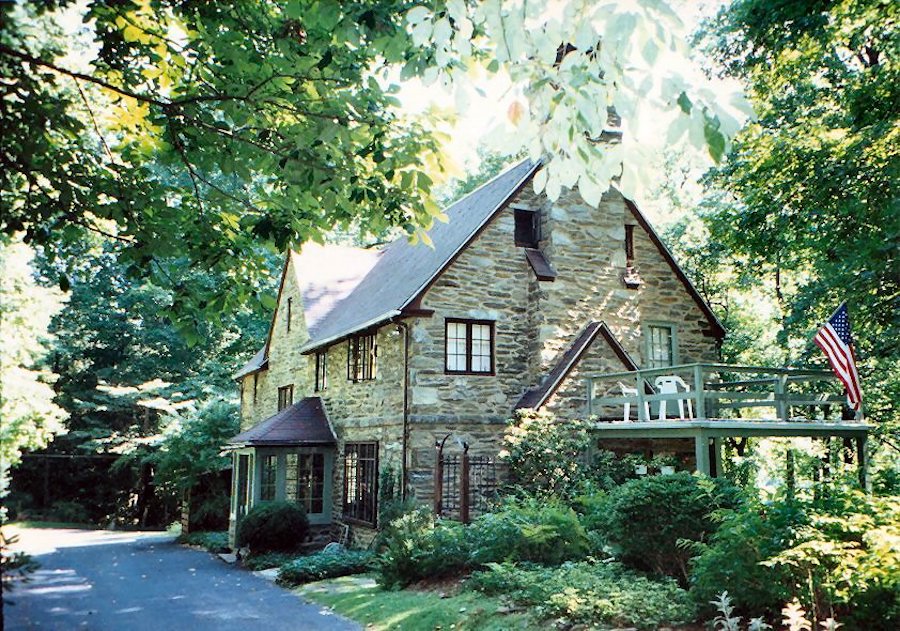 The house as it appeared in the 1970s | Photo: Collection of E. Hutchinson Evans

It also harkens to the Main Line’s pre-railroad origins. Welsh emigres were the first Europeans to settle in what is now Montgomery County, and the area that includes Lower Merion Township was known as the “Welsh Barony.” The house Dunham designed for Allen Evans is modeled after country houses in Wales.

Allen’s grandson Allen Evans III, a banker, bought the house from Margaret’s estate after she died in 1961, and it was here where Hutch spent his teenage years. His family sold the house in 1991 to Marshall and Mary Bassett, who expanded it with a new wing on one side and a new outbuilding containing a garage and a guest suite on the other. Griffith and her husband Robert bought the house from the Bassetts in the fall of 2010.

The original house retains its style and character, with only a few modifications. 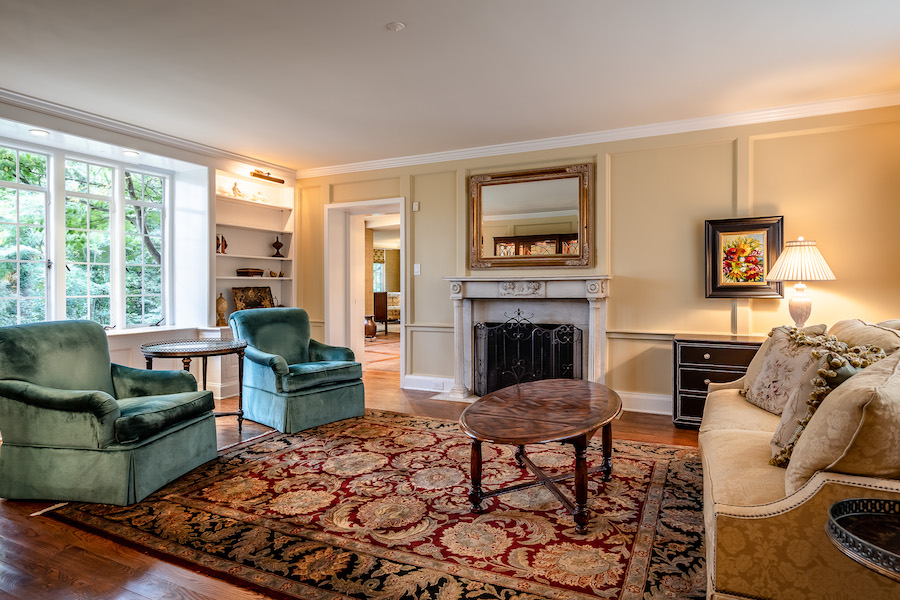 Its living room features a marble fireplace whose mantle once graced Chalkley Hall, the residence of another Evans ancestor. This grand 18th-century mansion in what is now Port Richmond, built by Thomas Chalkley in 1723, was abandoned around 1909 and demolished in 1954 to expand a factory next door. 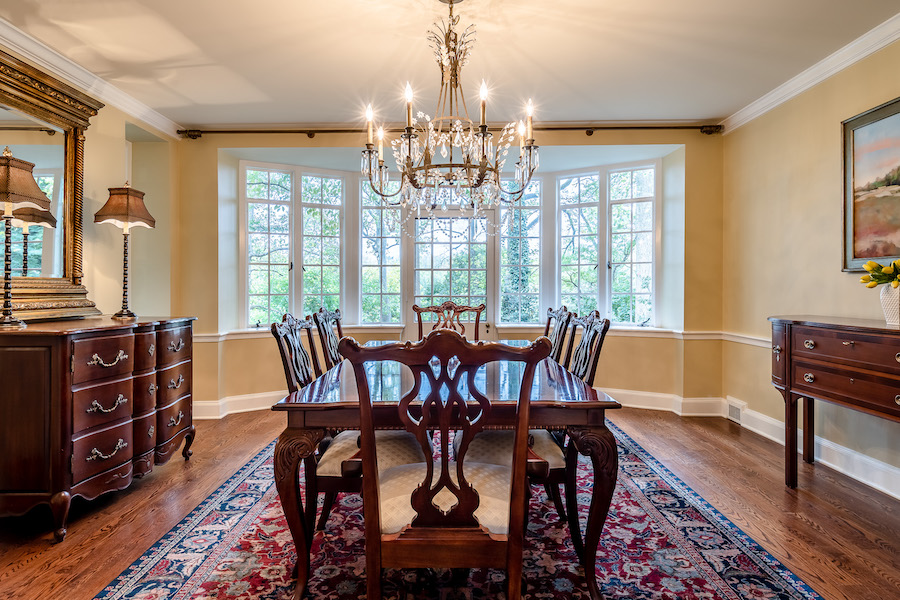 Its dining room features one of the Griffiths’ alterations, a striking traditional chandelier with an Art Deco flair. 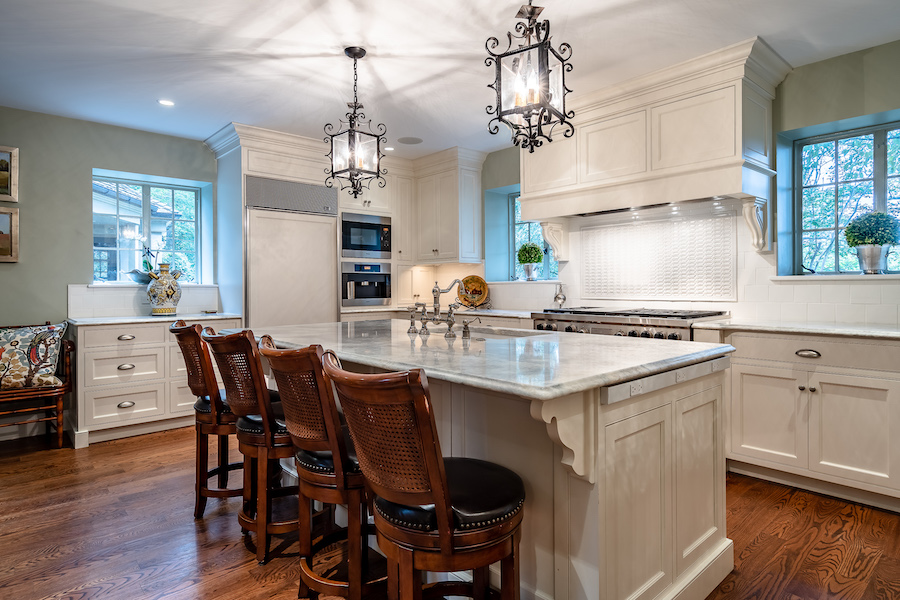 The Griffiths’ major alteration sits next to the dining room. A butler’s pantry with a dumbwaiter that served one of the two master suites upstairs originally sat between the dining room and the kitchen. It got incorporated into the enlarged and updated kitchen, which includes the original butler’s pantry cabinet along with up-to-date appliances that include a beverage fridge and a built-in Miele espresso maker. 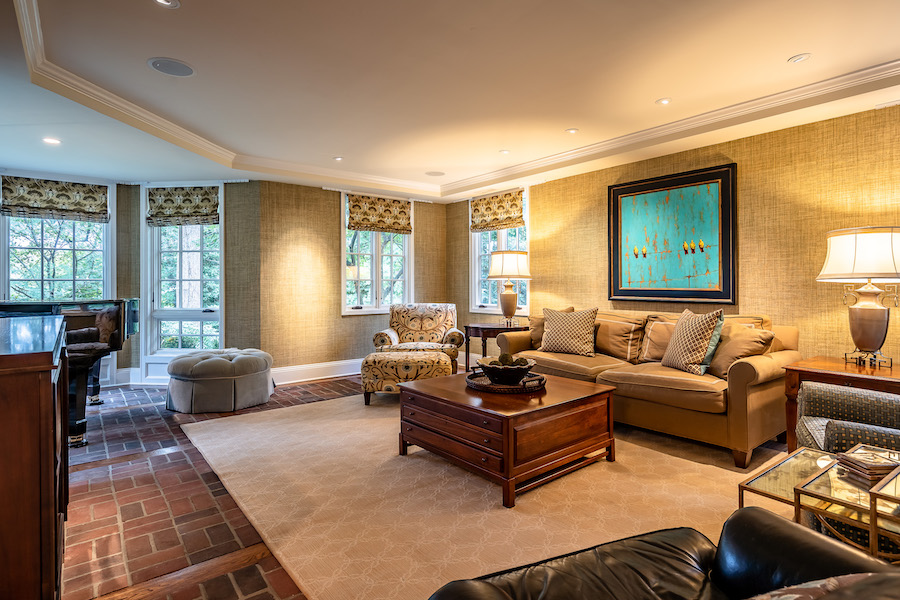 The new wing contains two main spaces. Downstairs, a corridor from the living room leads past a wet bar into the tray-ceilinged den. This room boasts radiant-heated floors and an octagonal bay window that houses a grand piano. 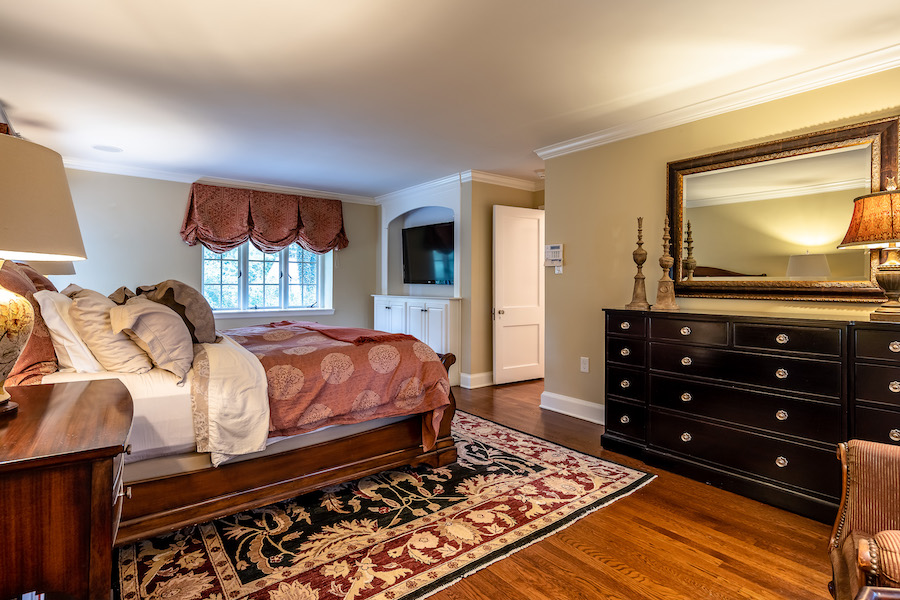 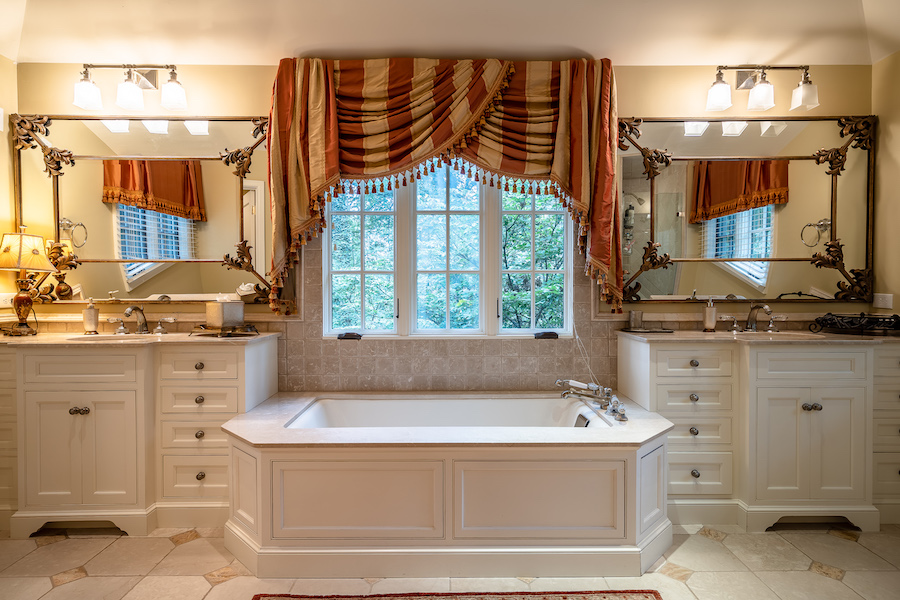 The house’s current master suite occupies the upper floor. It includes a large walk-in closet, a dressing table in the corridor and a sumptuously outfitted bathroom. Stairs connect both the foyer and the kitchen to the upper-floor bedrooms; the stairs from the kitchen led to the original master suite and the third-floor servants’ quarters. That floor now contains two bedrooms, one currently serving as an office, and a hall bath. 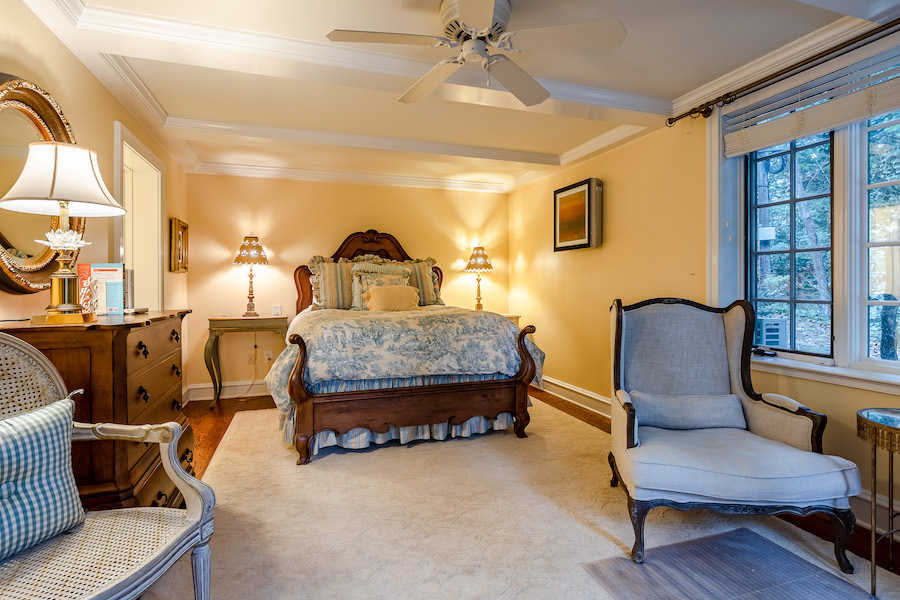 The other extension, connected to the house by an open breezeway, has a three-car garage on top and a guest suite down below. 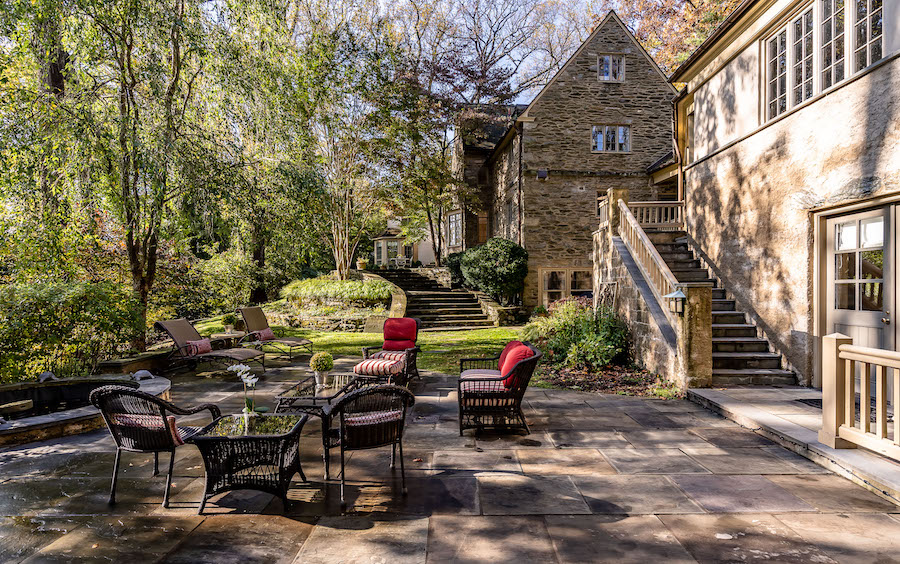 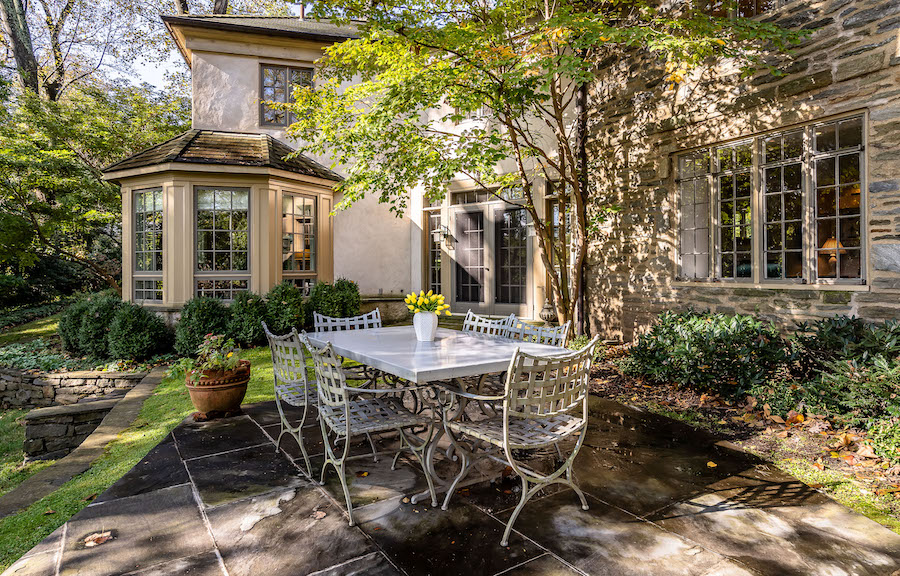 The guest suite looks out on the lower of two flagstone terraces in the back of this house for sale. 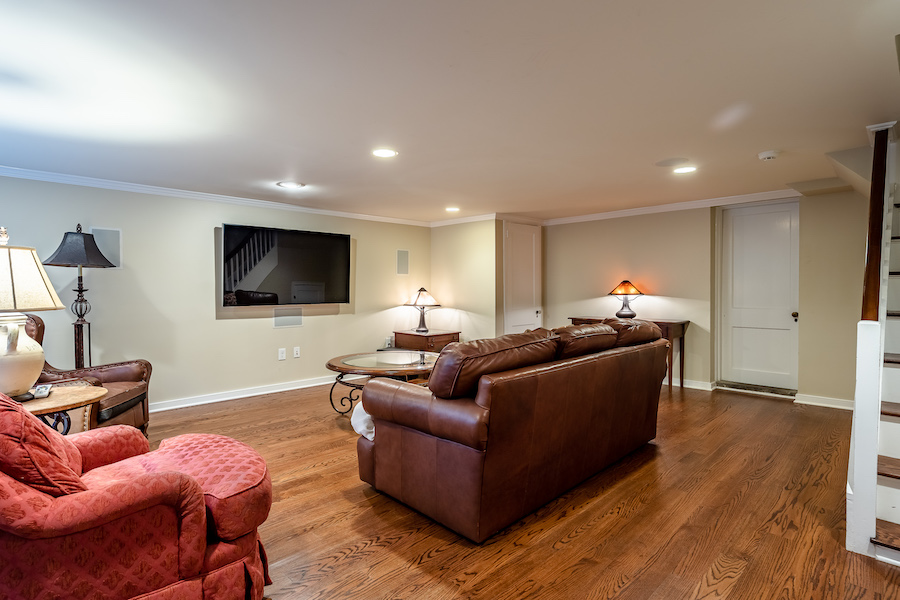 Below the kitchen sits the original garage, which has been converted into a media room. Here you will find a living connection to the house’s past etched inside a door that leads to a supply closet.

“When he was a boy, they wrote on the door that they had a club,” says Griffith. “Up here, it says he was the president: Emlen H. Evans. 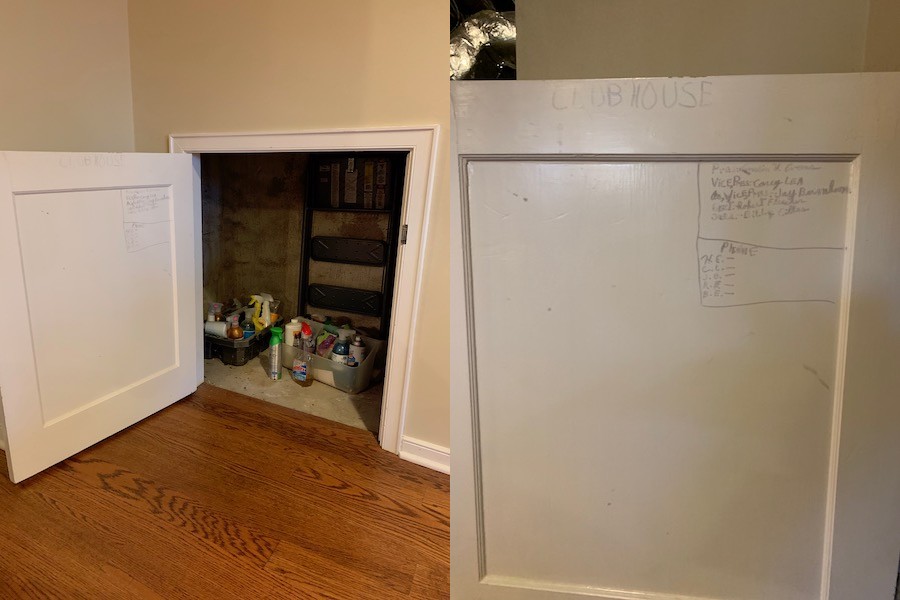 The door to the “clubhouse” and detail of the etching | Photos: Sandy Smith

“It’s been painted over several times,” she adds, but those old markings keep re-emerging. It’s as if this house still retains the spirits of its past occupants. Or at least one of them anyway.

Who knows? If you inherit Hutch and his family memories when you buy this place, you will find he is delightful company, says Griffith. Perhaps you might even get to meet him when he travels back to Philly from his home in Vermont. And maybe once he’s shuffled off this mortal coil, his ghost might just come back to take up residence in that storage-closet “clubhouse” once again.