On the Market: A Gangster’s Hideaway in Pine Hill

According to local lore, famed bootlegger Al Capone moved here in 1927 to escape the Chicago heat. You may also find this rambling residence a great escape. 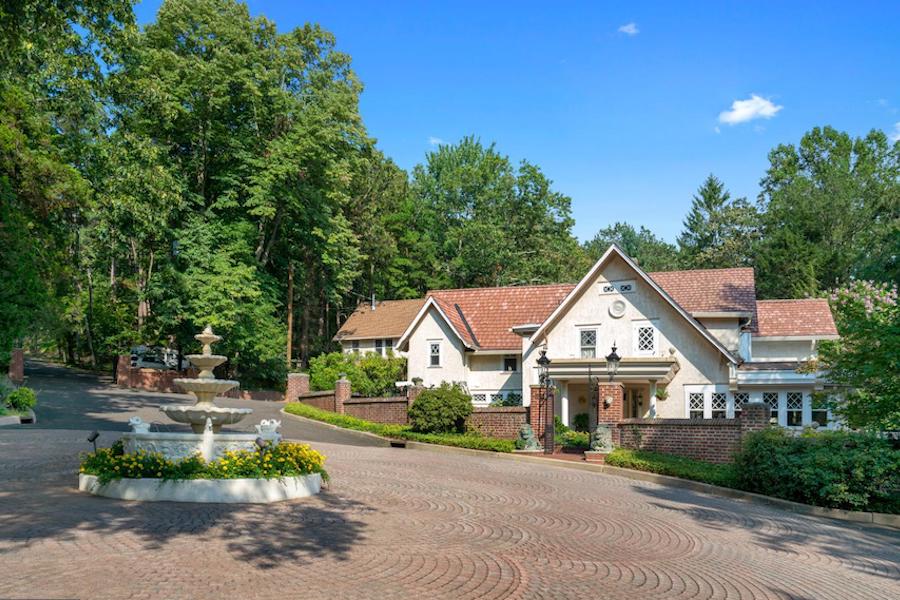 Are you feeling uncomfortable because of the unwanted attention you’re receiving? Getting hot under the collar from too much pressure?

Maybe you’d like a place where you can get away from it all and shut out the world. I have just the place for you this morning.

The traffic that passes by this place on New Freedom Road in the Jersey Pinelands has no idea this house for sale exists. The only clue: a red roadside mailbox with “12F” on it.

That no doubt made it highly appealing as a hideout for gangster Al Capone. Local lore has it that the legendary rum-runner made this house his home for a year or so around 1927. (His next residence: Eastern State Penitentiary across the Delaware.)

When Capone moved in, the house had recently been expanded by its owner, B. George DiLuzio, who had bought it from equestrian socialite Virginia Ireland a year or two before. The original house — now its front wing — had been the servants’ quarters for the palatial mansion Ireland lived in with her husband, advertising executive Howard Ireland; after they divorced, she kept the house and its more than 400-acre lot. 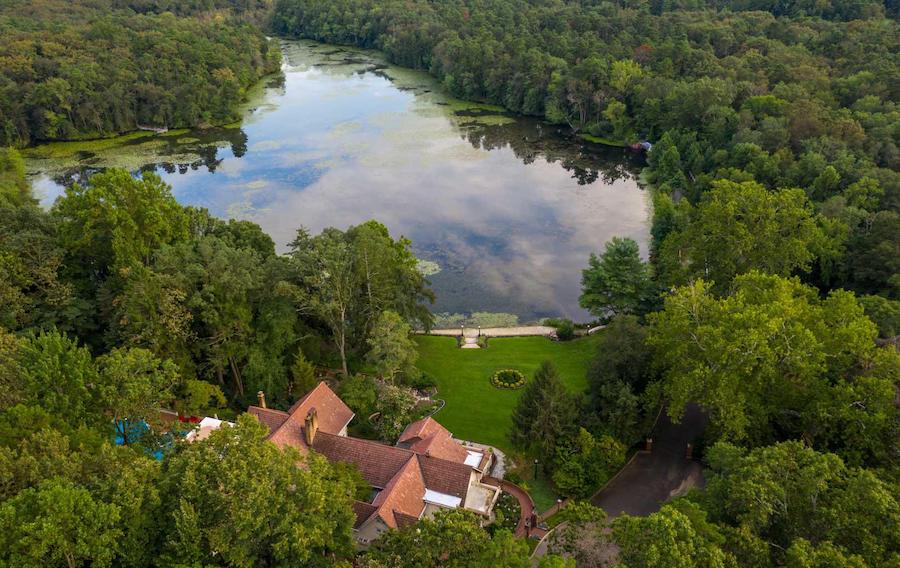 She sold most of the acreage to a gentleman named Crump, who turned it into what locals will tell you is the finest golf course in the world, one you will never see hosting a PGA Tour event because the members of the Pine Valley Golf Club value their privacy. The road that leads to this house continues on past it as a grassy fence-lined path that serves as a back entrance to the golf club. (This road is labeled “Old Mill Road” on online maps but is not a public way.)

She sold the servants’ quarters and 36 acres to DiLuzio, who more than doubled its size with a large addition. He also added the small garage and accessory apartment next to the house.

The house then passed through a few other hands before landing in those of antique collector and interior designer Barbara DePaul and her husband. “I had sold the two men who owned [this house] all my furniture, and ended up buying it all back from them” along with the house, she says. 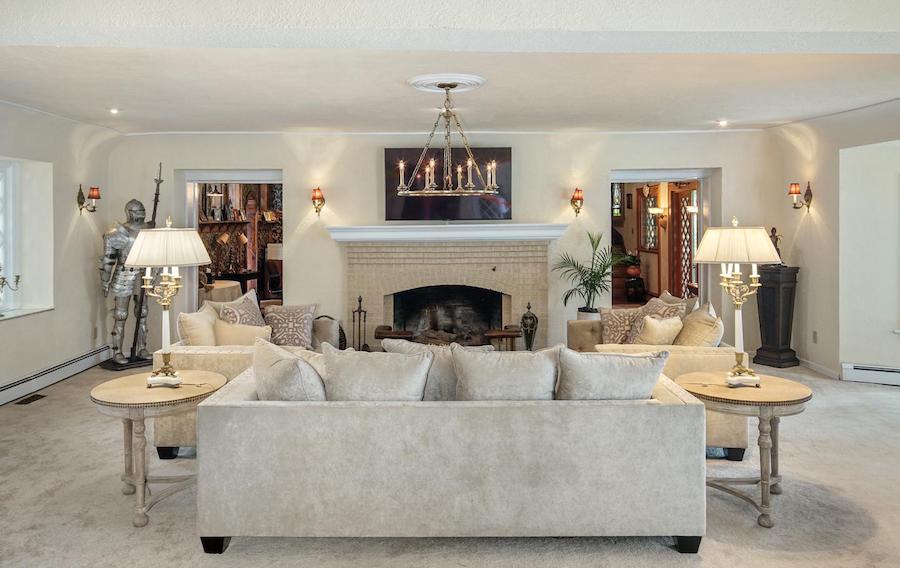 One of the two men she bought it from, a personnel administrator named Stanley Anderson, went on a real redecorating spree when he bought and rebuilt the house in 1974. According to a Courier-Post feature that appeared in January 1975, Anderson tricked out the house with “walls covered with tooled leather, furniture from castles in Germany and France, dazzling crystal chandeliers, a dining room suite of inlaid rosewood, beautiful Silver Crown Persian rugs, hand-painted Italian vases, a suit of knight’s armor standing more than six feet tall, a rare Steinway Grand player piano, a bird’s-eye maple staircase, a plush, cozy bar, a second-floor sitting room complete with a cathedral-like ceiling and a lovely fireplace, and four large bedrooms furnished in styles ranging from early American to ancient Chinese, the latter…being Mr. Anderson’s bedroom.” 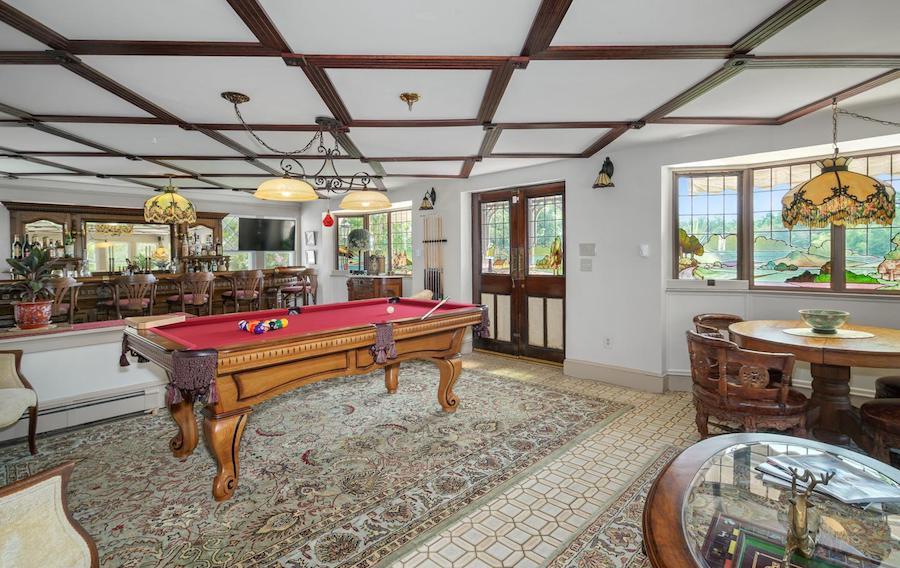 Much of what this long paragraph describes remains part of the house today, including the suit of armor. But some of those things have changed. 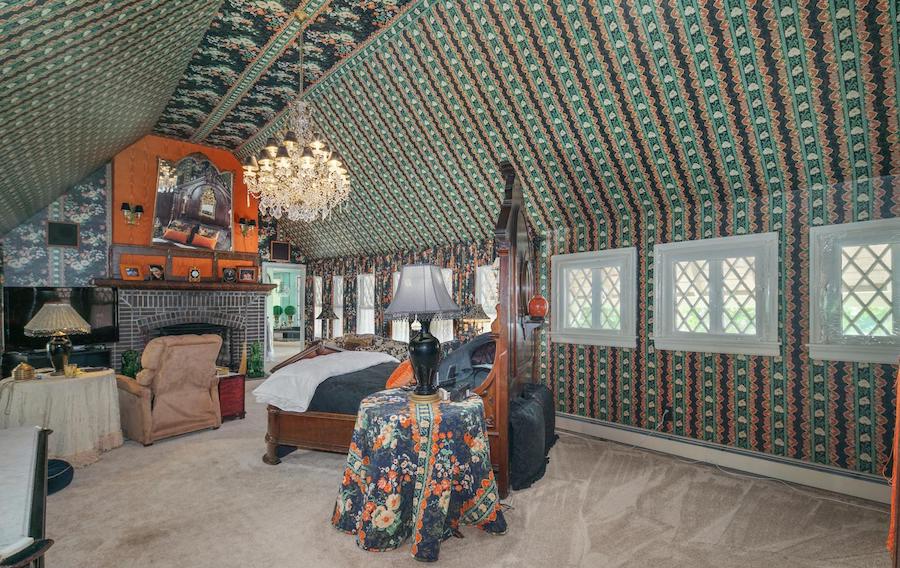 That sitting room, for instance, is now the master bedroom. DePaul speculates that it had once been two separate rooms because of the differing window sizes. The part with the smaller windows, she guesses, may have been a nursery.

Many other features, some of which were also described in that article, give this house a distinct and quirky personality. Among the unusual ones: 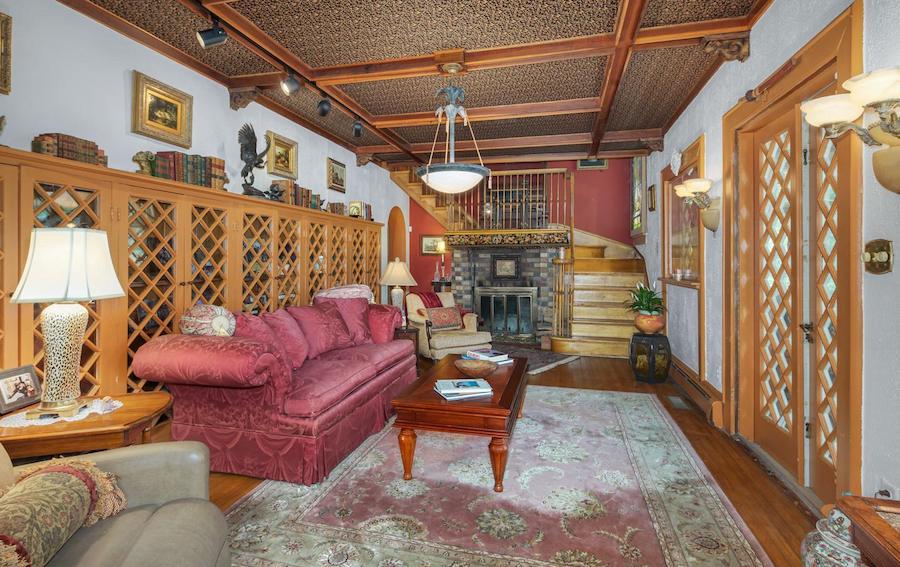 The brick fireplace embedded in the aforementioned bird’s-eye maple staircase at the back of the library on the first floor. 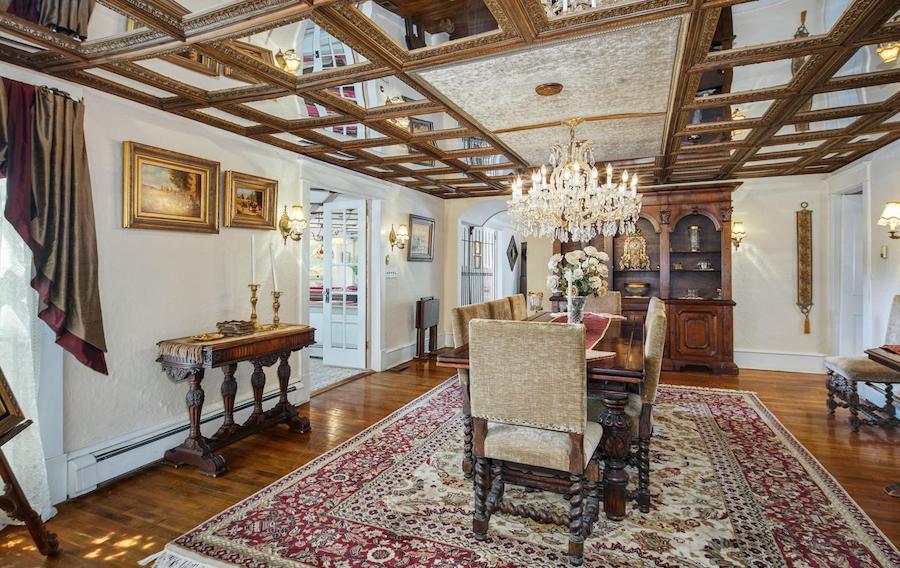 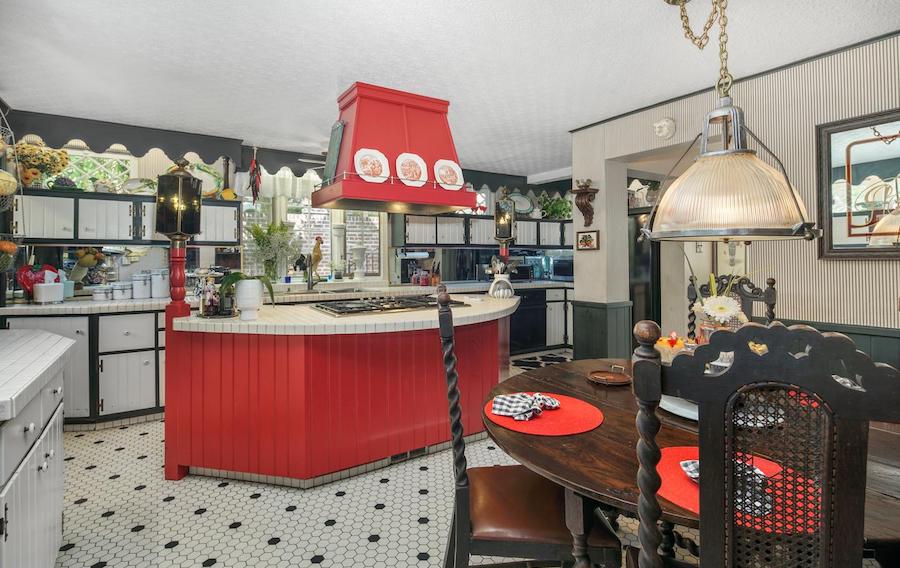 The two cooktops in the kitchen — a five-burner Thermador gas cooktop on the island with wall oven adjacent and the smooth-top electric range in the original range nook. 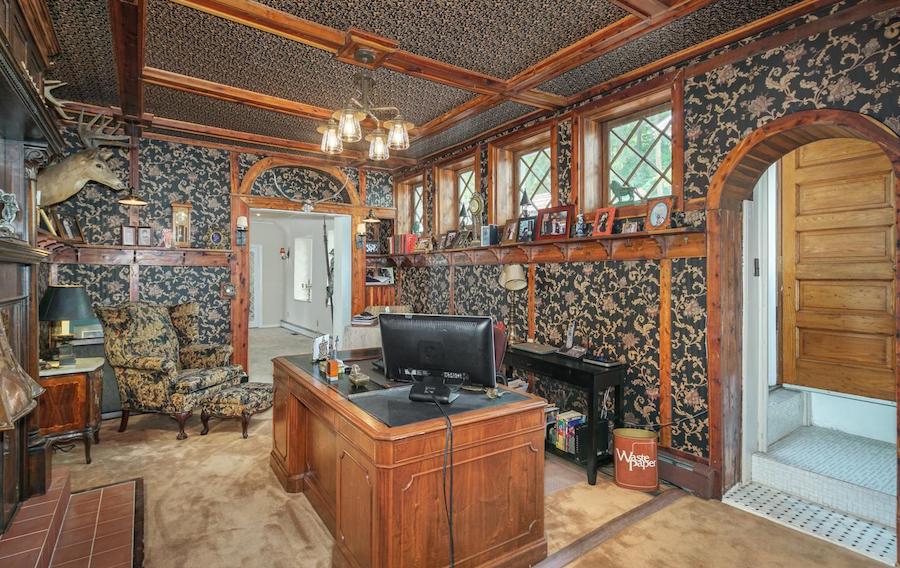 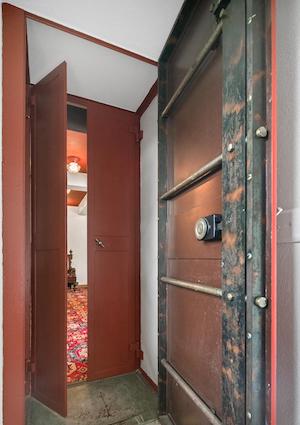 An elaborate home office lined with coat hooks. This room, DePaul says, was outfitted by one Dr. Blanchard, a timkerer and inventor who lived here as well. “He used to have all kinds of wires hanging from the hooks,” she says.

Then there’s the room at the top of a narrow staircase off this office. Protected by a combination-lock door, this room features 18-inch-thick concrete walls. 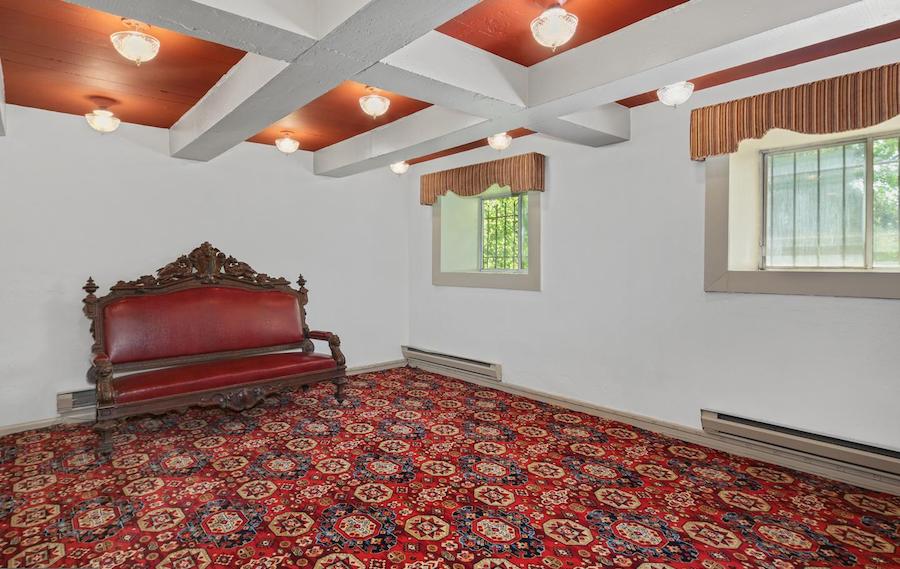 Capone used this vault and another, plainer one in the basement to stash goods, money, and maybe even the occasional person: a 1977 Inquirer Magazine feature describes several bodies found interred on the grounds of this house. 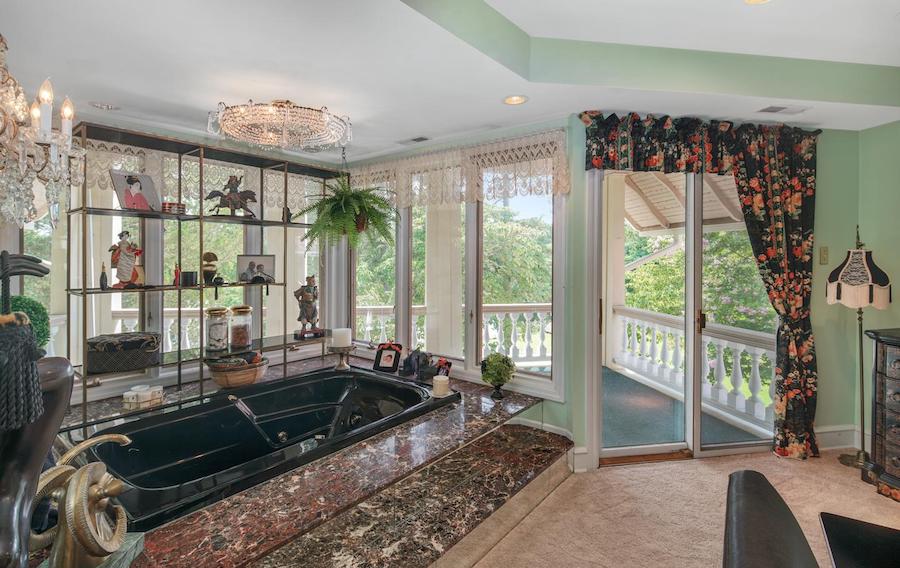 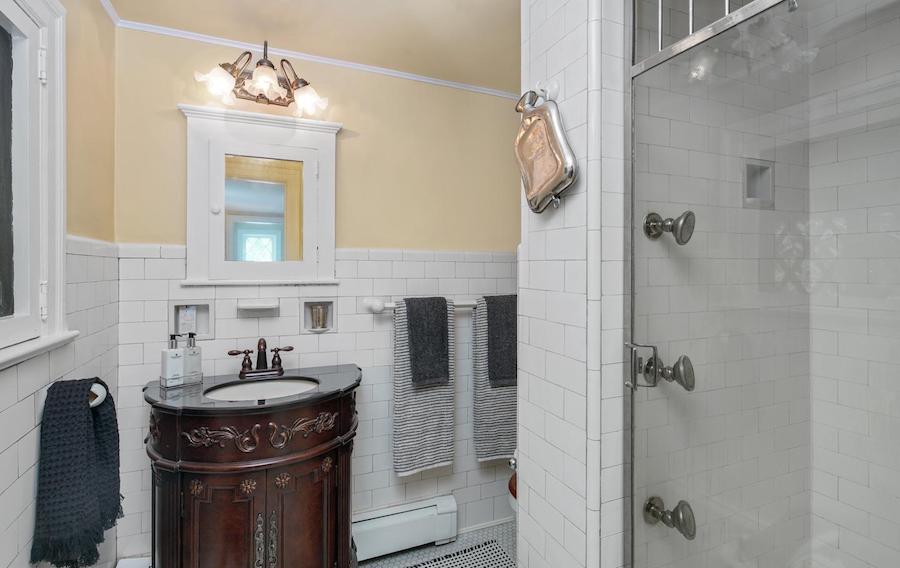 Another unusual feature that’s now common in high-end residences can be found in one of its bathrooms. Capone was obsessed with cleanliness, and this bathroom has a shower designed to do the job: it has a 12-inch-wide rain head in its ceiling and six body sprays on its walls, with separate controls for the overhead and body sprays. 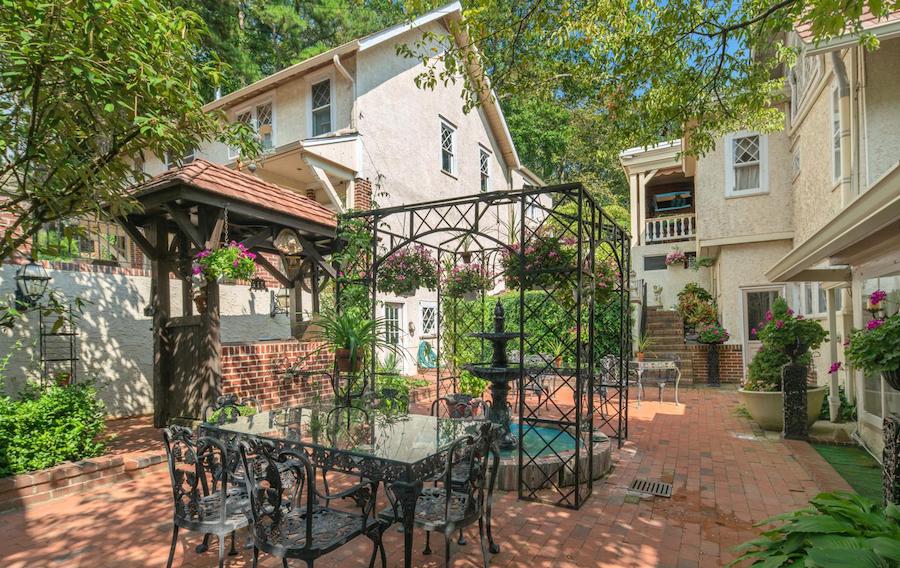 The multiple levels of this hillside house give it and the courtyard it envelops a feel that’s part-Tuscan, part-Alpine. Jackie Souders, who is marketing this house along with her husband, listing agent Bill, opines that it would make a lovely setting for a wedding reception. 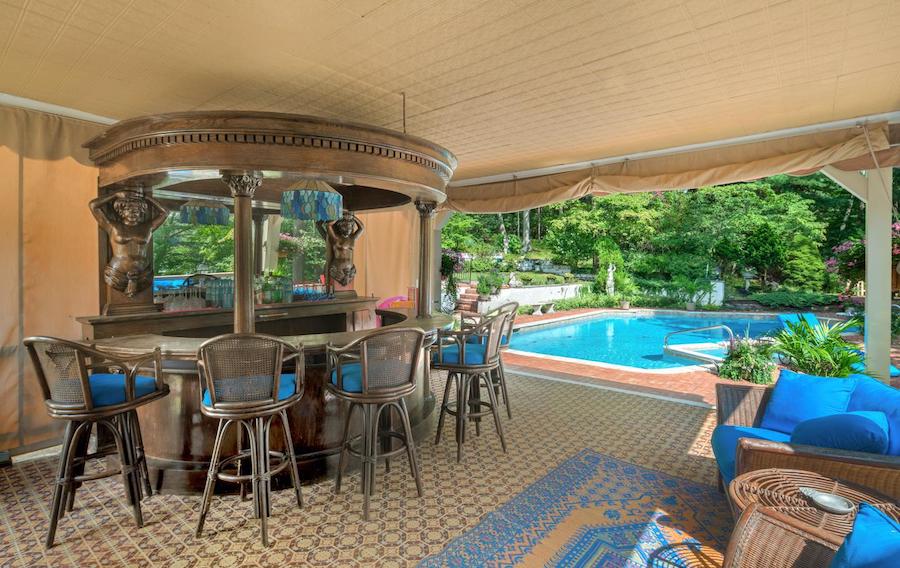 Its lushly landscaped grounds combine stone pathways through dense woodland and manicured lawns and gardens. The view across the lawn from the game room and sunroom extends to Lake Lekau (Timber Lake), which separates this house from the golf club. You’ll find a dock, a small boathouse and even a little patch of beach at the lakeside. 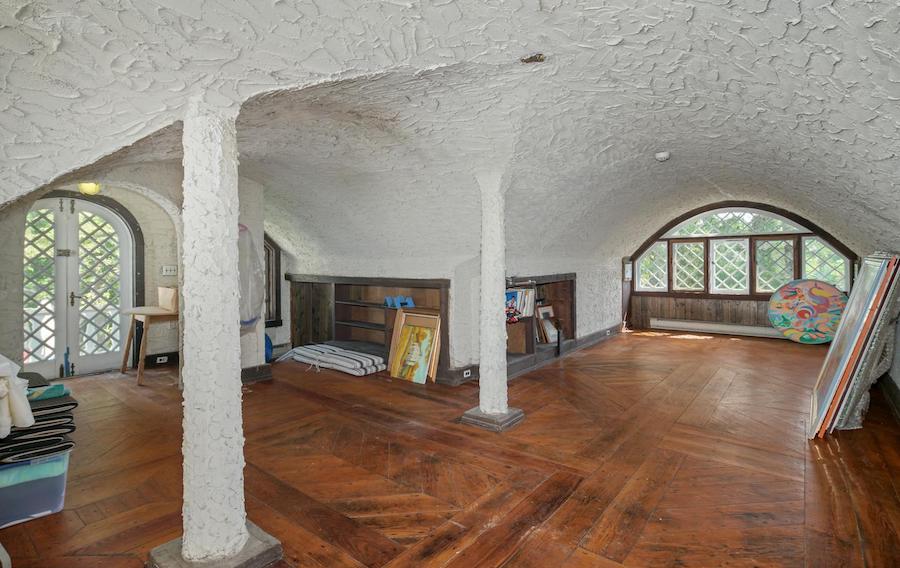 Third-floor ballroom; the room has a separate outside balcony entrance from the courtyard’s upper level and is accessed from within via a ladder-like staircase behind the master bathroom

Other amenities include a third-floor ballroom that served as a caretaker’s residence at one time, a tennis court and a seven-car garage. Rumor has it that Capone dug an escape tunnel from its basement into the woods, but neither DePaul nor I could find evidence of its existence.

This house for sale is nowhere near as grand as the Ireland mansion, which burned to the ground in 1939. Its site, next door to this property, now serves as a Scout reservation. But it has a level of opulence that’s very rare for South Jersey — or, for that matter, anywhere else in this region not named Gladwyne. And it has a backstory that no other residence in Greater Philadelphia can match.

OTHER STUFF: In addition to a celebrity hideaway, Bill Souders suggests other possibilities for this property besides a private residence. Among them: a wedding and event venue or the clubhouse for an active-adult community built around it.