On the Market (Again): Ardrossan Spinoff in Villanova

Stop us if you've heard this one before: there's a beautiful chunk of the legendary Ardrossan estate up for sale. It's truly magnificent. Make its owner happy and buy it already. 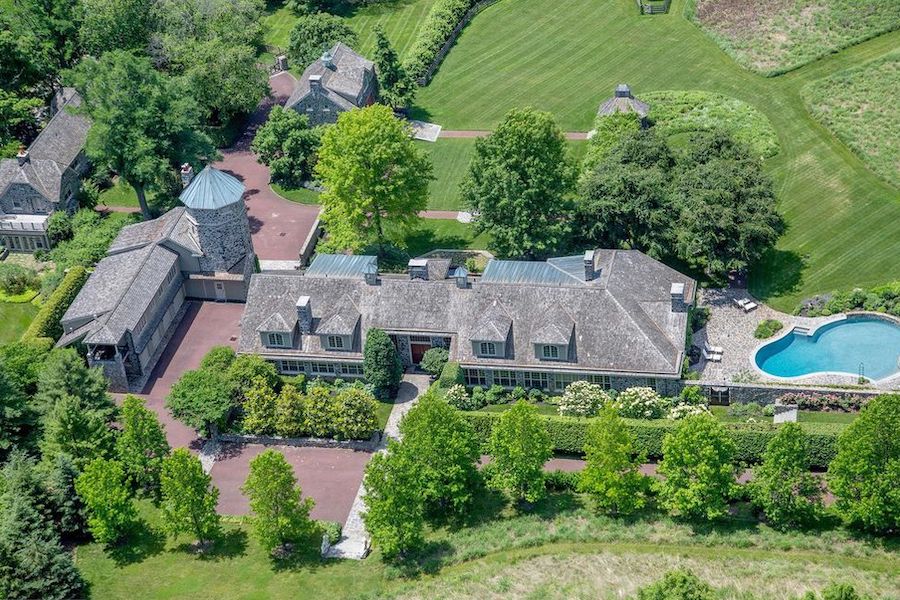 And every one of them has been out there on the market for a while.

Or sometimes on and off the market, as this magnificent estate has been.

While the listing is silent about the provenance of the estate now known as Albermarle, it’s pretty clear — or at least clear to us anyway — that its main house began life as a stable of some sort on the famed 800-acre Ardrossan Farm. When you’re a famed stockbroker who loves to fox hunt, you’re going to keep lots of horses around, and the main house in the aerial view above has the dimensions and large openings characteristic of a stable.

Those openings have all become huge French doors or large windows that flood the various main-floor rooms with light. The large door in the center leads to a two-story foyer with a stone fireplace. 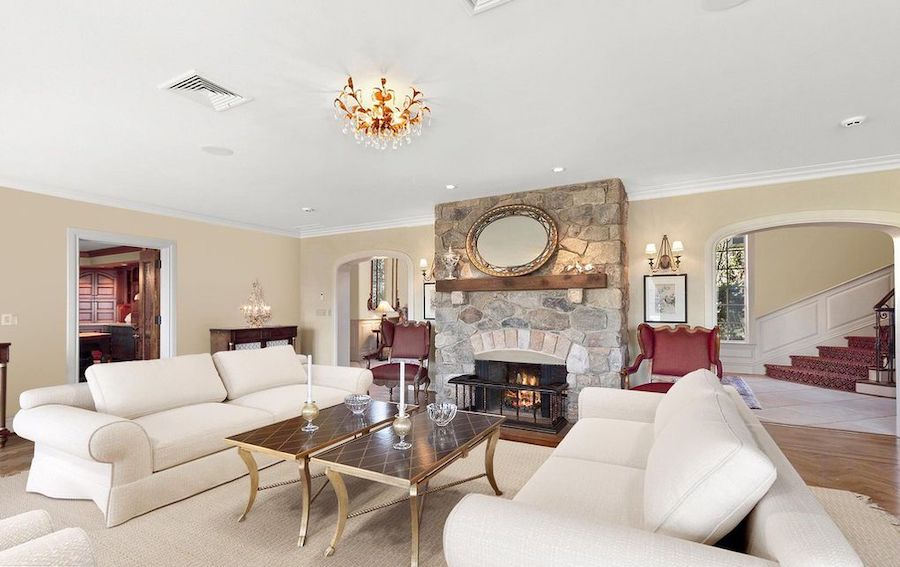 That fireplace, one of many in this house for sale, is double-sided. On its other side lies an elegant and tastefully appointed living room. 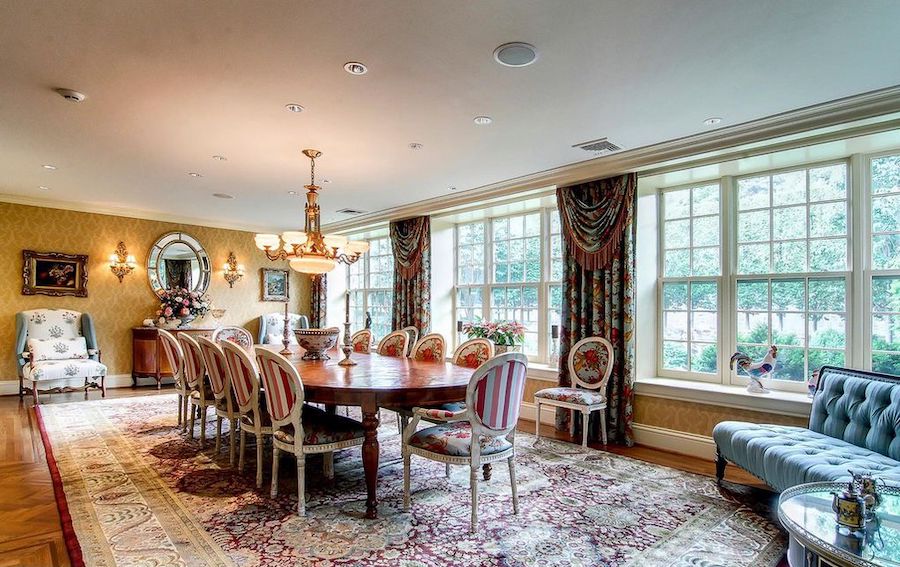 Those same adjectives apply to the dining room, which is one of several spaces in this collection of structures designed for entertaining. 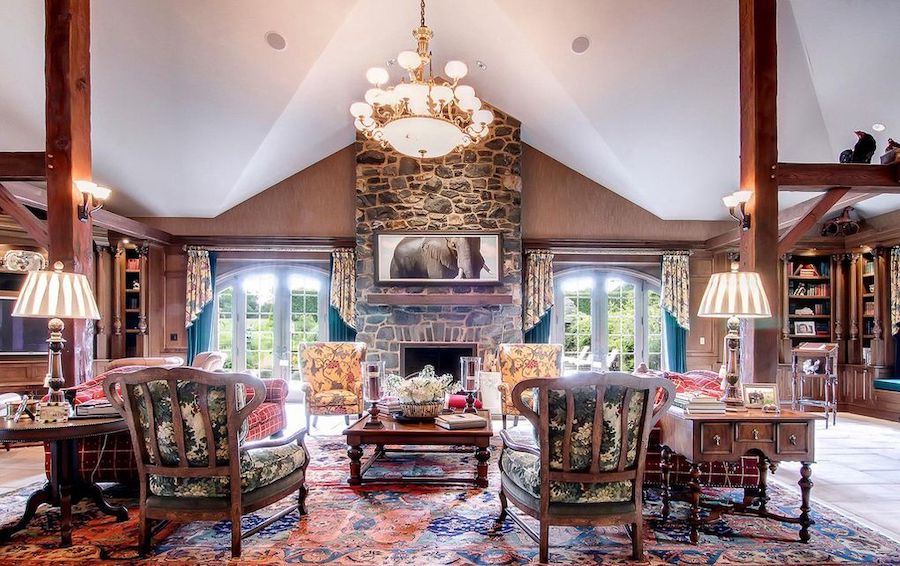 Another is the great room, which includes a fireplace, wet bar and access to a wine cellar. 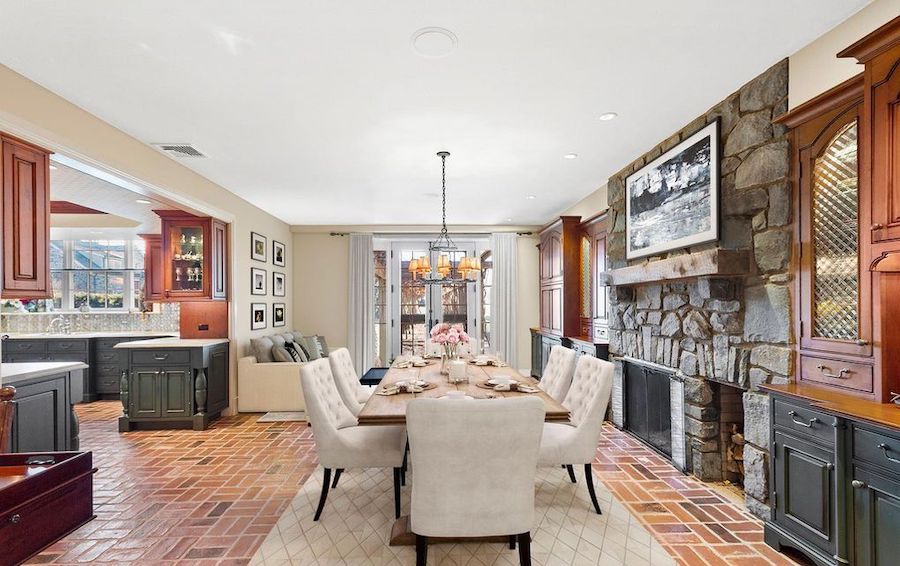 You’ll probably do your day-to-day dining in the more casually appointed dining room attached to the kitchen. 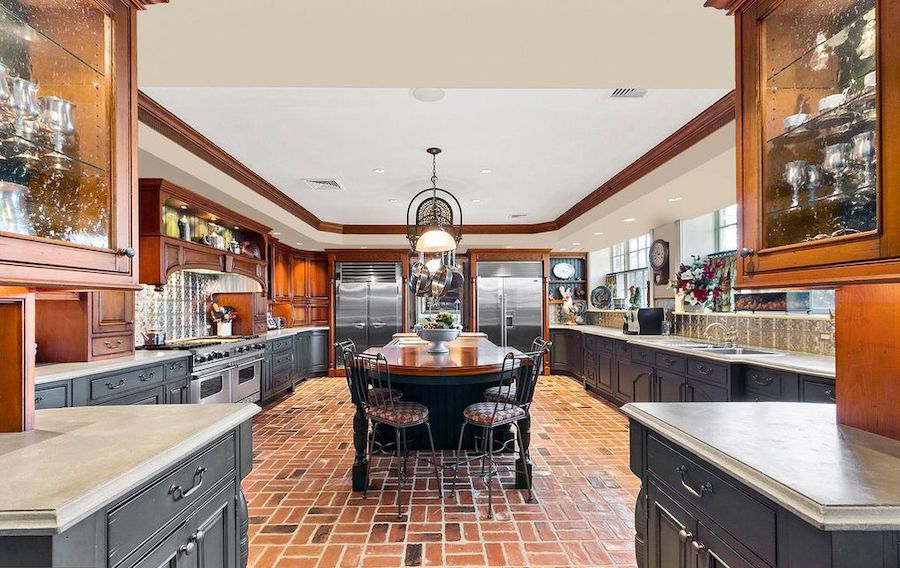 That kitchen is equipped to handle a large feast with its professional-grade appliances and wealth of counter and cabinet space. 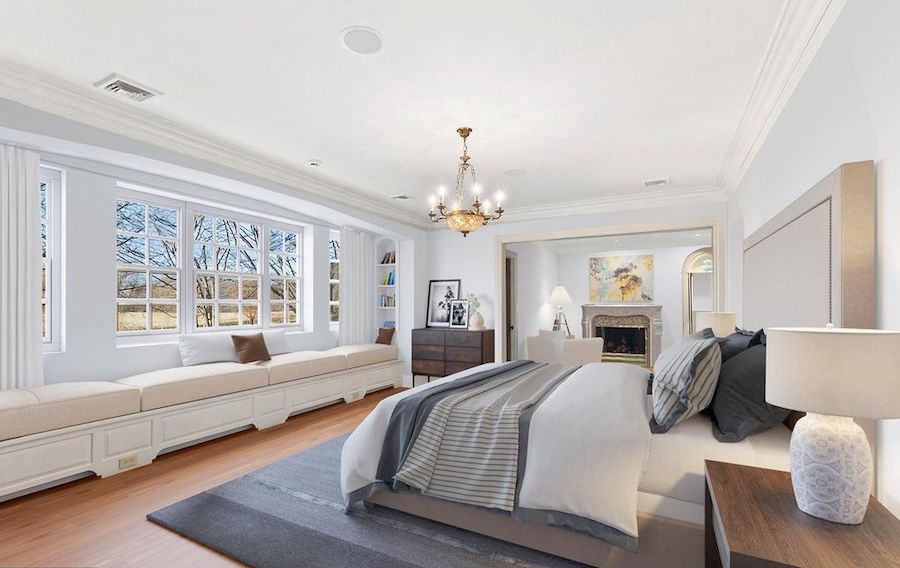 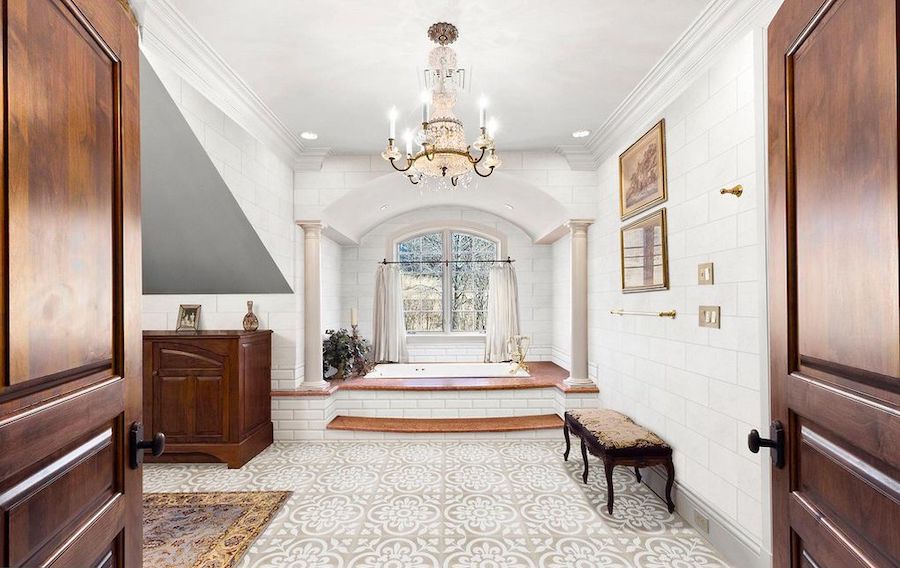 The private spaces on the second floor are no less impressive. The master bedroom has a bathroom that’s the size of bedrooms in most ordinary houses. 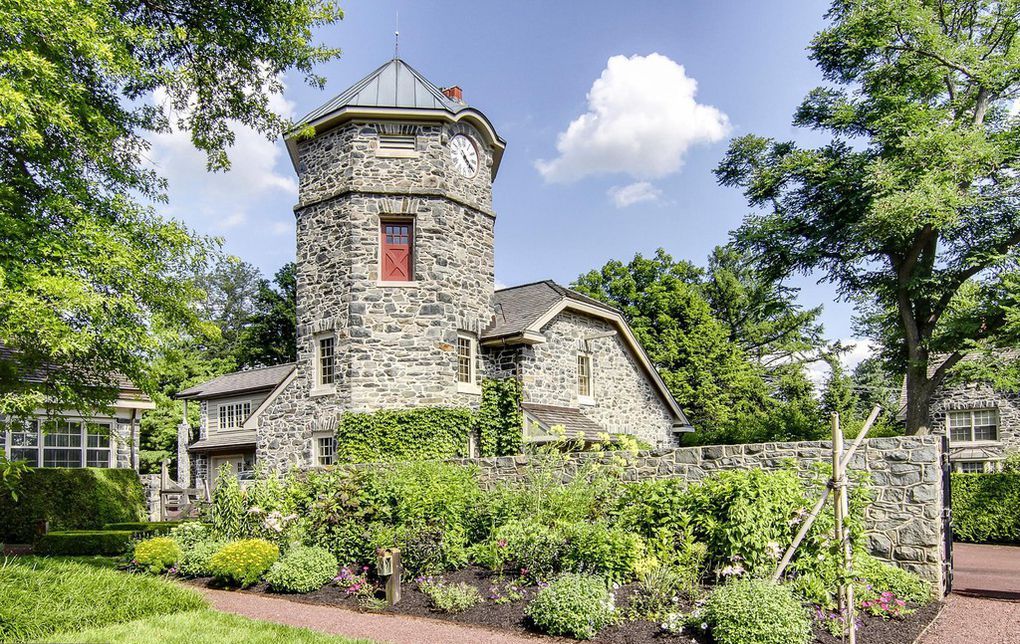 At one end of the main house stands a clock tower. Beneath the tower is a small building that serves as an office for the owner, who conducts his business from it. 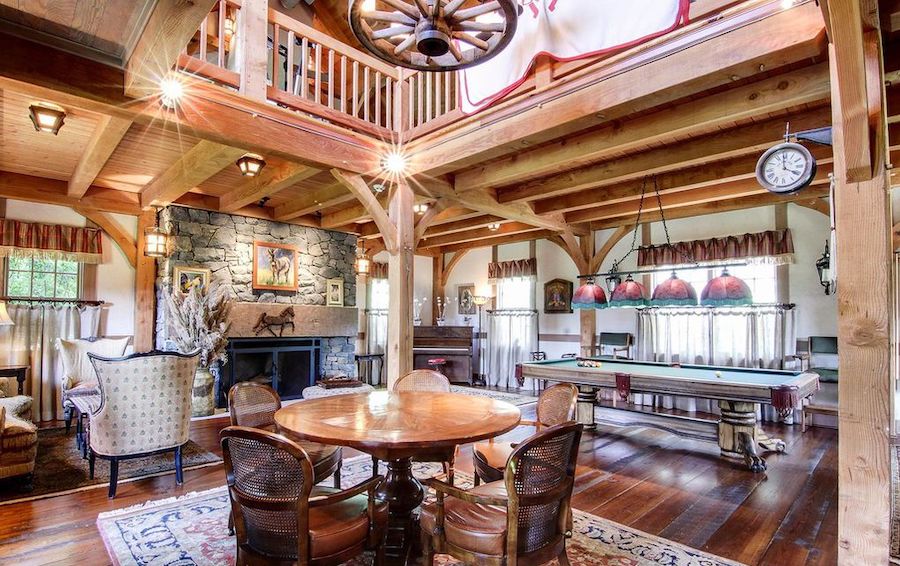 Two other structures sit on this 17-acre estate. One is a bank barn that was recently transformed into a huge party space, with game and video areas, a wet bar, two bathrooms and a gym on its balcony.

The other is a guest house that contains two separate two-bedroom residences. 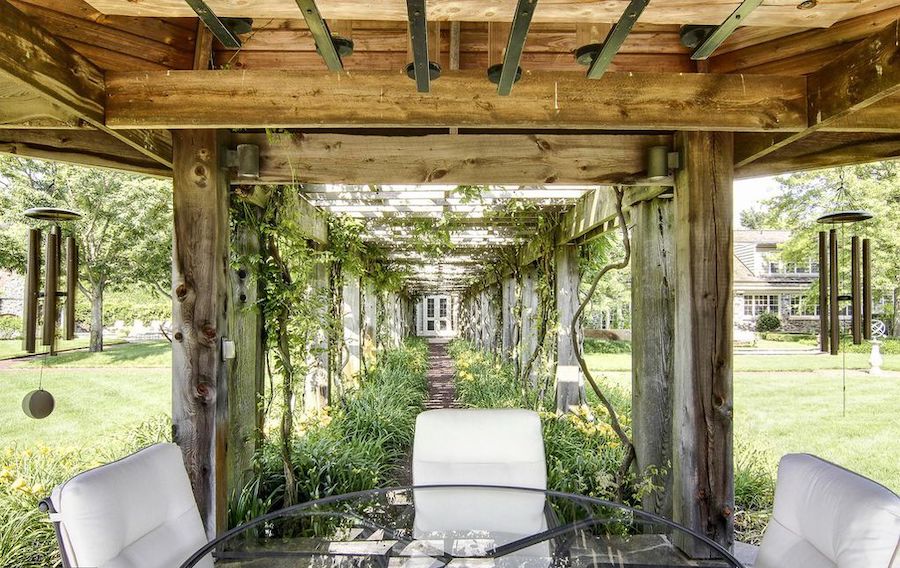 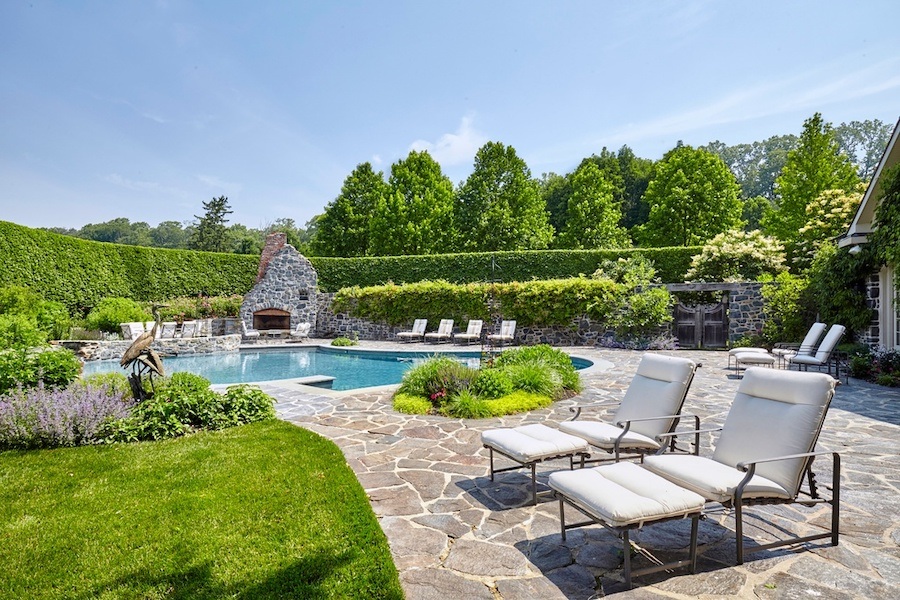 The outdoor spaces are as fabulous as the indoor ones. These include an outdoor dining gazebo linked to the house by an arbor, a tennis court and a pool with its own fireplace.

This section used to have a regular feature titled “Why Won’t This Sell?” We think this a worthwhile question to ask about this splendid, classically Main Line estate, which has been on the market almost continuously since 2012 with four separate periods of listing. (And we’ve featured it just about every time it’s been relisted: for $25 million in 2013, for $22.5 million in 2015, for $16.9 million in 2017, and for $14.9 million last fall. Clearly, there’s something about this house for sale that makes it highly appealing, including its backstory. When this property finally sells, we want a piece of the agent’s commission.)

(all figures are for the four structures together)

OTHER STUFF: Between the garage spaces in the office building and those in the bank barn, you can park seven cars. This house was just relisted at a price $250,000 below its asking price when it was last taken off the market on Dec. 31st. The agent notes that some of the photos have been digitally staged to refresh the house’s appearance.