There’s a Stranger in My House

What happens when a vacant house for sale has an occupant? All kinds of trouble, say real estate agents. The problem is so widespread that legislation to deal with it now sits in Council. 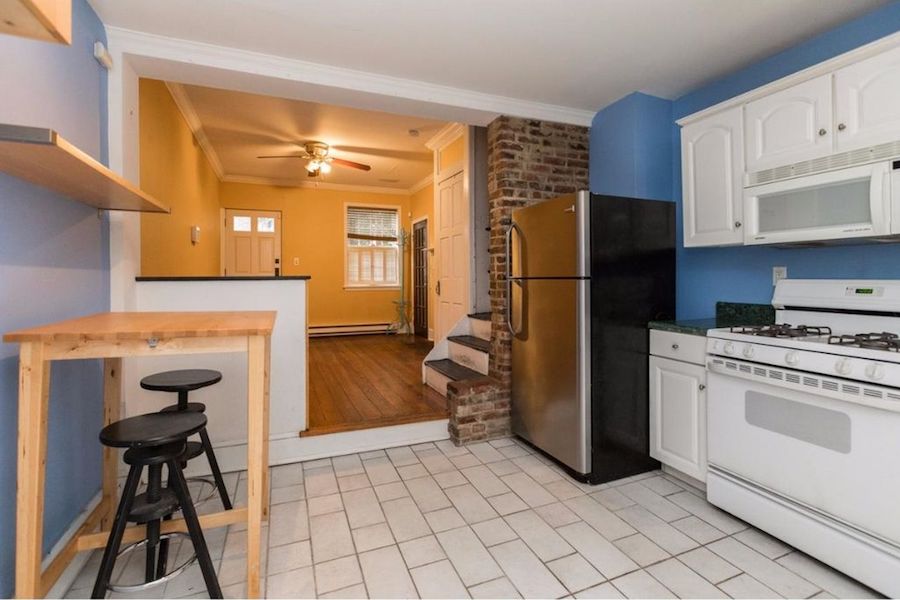 That trinity on Iseminger Street last featured here in January finally has an occupant. But first, its owner had to keep another occupant out. | Bright MLS images via RE/MAX Access

Remember that cute trinity on Iseminger Street in Wash West that wouldn’t sell after six months on the market?

Someone actually came close to buying it last fall. The reason the sale fell through, though, will give you the jitters, just like it did the would-be buyer.

“I toured the property twice before asking my parents to come into the city and give their blessing before I made an offer,” said Kelly Diaz-Albertini, who was on the verge of submitting an offer in early September. “On that visit, it was clear that someone had been staying in the house. The bathroom and bedrooms had been used and the back door was rigged so it couldn’t lock.

“Since the person who had been living there had already moved out, it was most likely squatters.” Additional clues like a bag of house keys left in one bedroom also pointed in that direction.

“I’m a single girl buying my first home and the whole thing made me really uncomfortable,” Diaz-Albertini continued. “Even though I may have gone forward with an offer and invested in some extra security, there was no way my parents were going to be okay with me living there after that.”

While such incidents are fairly rare in the city’s core neighborhoods, the problem is a common one citywide. “It touches every single neighborhood,” said Matt Braden, chief executive officer of the Greater Philadelphia Association of Realtors.

At the least, having squatters occupy a house for sale causes some headaches for the agent and the property owner. Most of the time, though, squatters not only send sale agreements down the drain but also drain agents of valuable time and homeowners of money they don’t have to spare.

“I have a 70-year-old woman in Germantown who had squatters in her [old] home for five months,” said Matt Pershe, legislative assistant to City Councilman David Oh (R-at large). “She’s on a fixed income and had sunk all her money into renovations. While she was trying to get the squatters out, they stripped the house bare.”

Braden said that squatters can, and have, posed safety threats to agents. If a squatter believes they are residing in their home legitimately, he said, “that person has certain rights. They think they can protect themselves against an intruder.”

Some squatters are themselves victims

And some squatters do believe they’re legitimate occupants because they have leases. Braden said scams of this type were also common. “It seems that a great way for someone to illegally solicit for a property is on Craigslist,” he said. “They’ll grab images off the MLS and list it not as a sale property but a property for rent. That takes on an appearance of legitimacy.”

It also further draws out the often-lengthy process of removing the squatter from the premises. If an agent and an owner calls 911 and the police find a person brandishing a lease when they arrive, Braden said, “they’re not in a position to say what’s a contract and what’s not a contract.” At that point, removing the “tenant” becomes a civil procedure known as “ejectment,” which can take as long as a year, or even longer, to complete.

Braden told the story of one unlucky agent who had to get squatters out of a home twice. “They had listed it, and there was a buyer. They went for the final walkthrough, and boom! There was someone living in it.” The sale fell apart, and the agents went through a nine-month ejection procedure. “Then they go through another sale, and the house was occupied again.

“The owners’ retirement is tied up in this house, and they can’t go through with it because the people in it are flipping them the bird.”

Some agents, when confronted with this prospect, simply offer squatters cash to leave right away. This practice, known as “cash for keys,” occurs often enough, Braden said, but his organization does not want to encourage it.

Solutions tied up in Council

Braden said that GPAR began hearing from agents about squatters in 2016. The first agents to complain handled many bank-owned properties that became vacant when they were foreclosed on. The number of such incidents rose sharply in 2017, and that led GPAR to survey its members to get a better idea of the extent of the problem. They heard back from more than 60 members who related tales of dealing with squatters.

Everyone, including several members of City Council, agrees that something should be done to enable agents and law enforcement to remove illegal occupants from a property faster. What that something will be, however, is now up in the air. Currently, two similar bills that would allow officials to remove some squatters in as little as 48 hours are in a Council committee. One is a revised version of a bill Oh introduced last September; the other is a nearly identical bill introduced by Councilman Al Taubenberger (R-at large) last month. Taubenberger, who with Realtor Allan Domb (D-at large) shares Oh’s concern, had also introduced a bill calling for hearings into the issue at the same time Oh introduced his bill.

Domb chairs Council’s Committee on Housing, Neighborhood Development and the Homeless, where both of the anti-squatting bills now sit. Pershe attributed the dueling bills to internal Council politics while Braden said that he had heard that Domb had requested a bill that fixed flaws in the original legislation. As of now, no hearings are scheduled for either bill.

That trinity did sell, but…

As for that house on Iseminger Street, it did finally sell, about a month after it last appeared here. But not without some more squatter drama first, said Sean Conroy, the agent with the Somers Team at RE/MAX Access who handled the sale.

The parents of the owner, a college student who left the city to accept a teaching position in Baltimore, arranged to have an alarm system installed on the home. “One of the times they came back [to inspect the property] before the installer came in, the squatter was in the house. They informed her she was squatting, and she threw a bottle at her.

“Even after we installed the alarm and had the locks changed, someone came by and broke the basement window trying to gain access to the house again.

“This squatter was very aggressive.”