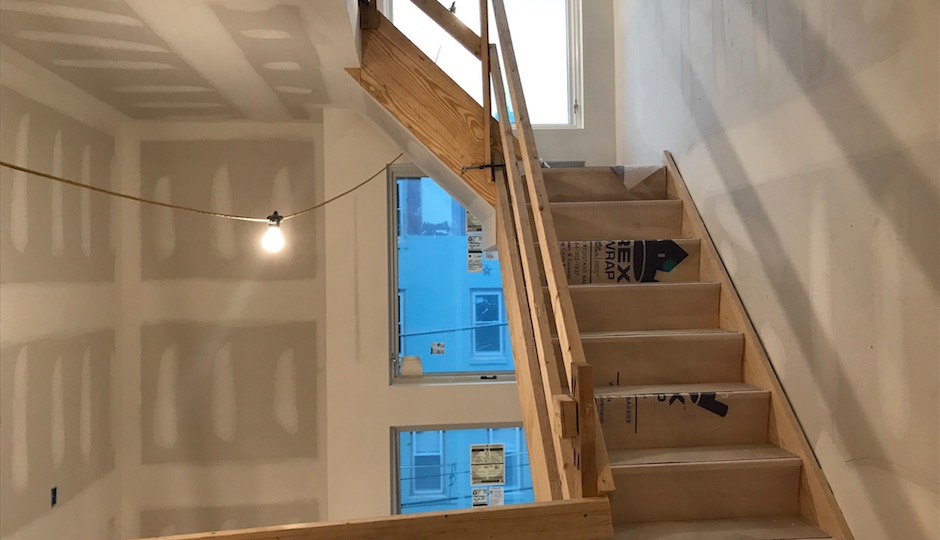 The stairwell of 1903 E. Arizona St. at the second-floor level. | Photos: Sandy Smith

“When are you going to clean up the outside?”

Well, Red Oak is at it again, and East Kensingtonians are simply going to have to get used to rust-colored homes on their blocks.

This pair of trim townhouses at 1903-05 E. Arizona St. has been dubbed “Jack & Jill” because of their joined-at-the-hip character. And even though they’re still a little ways from completion, they’re already being marketed by Solo Real Estate, which is also marketing the Emerald Street property. 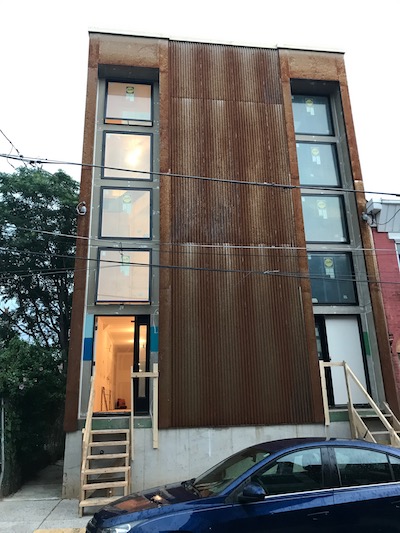 Because of their smaller size, these homes are priced below the one on Emerald Street, but they still go big on the amenities, cramming a lot onto their unusually narrow 12-foot-wide lots. And the narrowness of those lots led to an unusual construction decision that makes the insides of these homes stand out.

Giacobbe explained that the traditional side stairwell in the middle of the floor would eat up too much space and make it impossible to create rooms of a decent size on the upper floors. So, much as the upper-floor stairwell at 2401 Emerald was cantilevered over the sidewalk, the stairwells in Jack & Jill are up front, in a square, full-height skylit atrium that adds visual appeal and drama to the homes.

This then required a structural element that would stabilize the homes: a U-shaped steel beam just in back of the stairs. This beam, inserted to keep the homes from swaying from side to side, is all but invisible, announcing itself only via small wedges at the ceiling of the first floor.

The narrow width also led to an unusual configuration: each of the floors aside from the main floor, including the basement, have one bedroom and one bathroom on them. That was the only way Red Oak could build three-bedroom homes on these lots.

Jack and Jill have had their interior drywall installed, so some of the other unusual structural features of these houses are hidden from view. What you will see in the photos below, however, is the basic shape of two very distinctive houses to come.

(information below applies to both homes except where indicated) 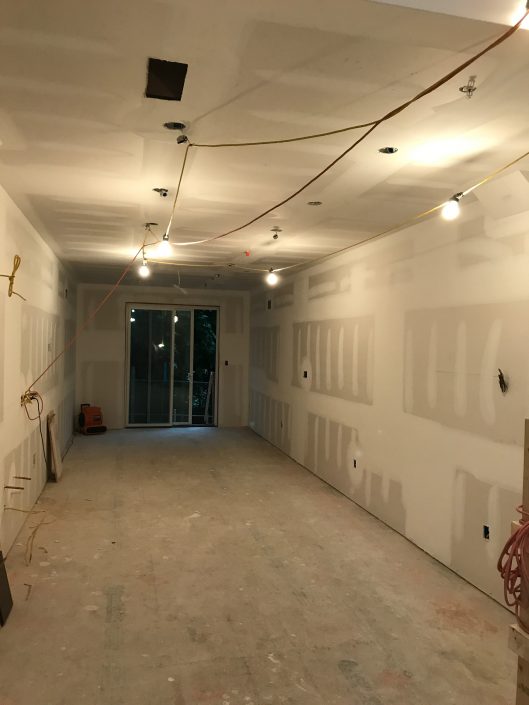 The main floor has a standard open plan, with the kitchen at the back. 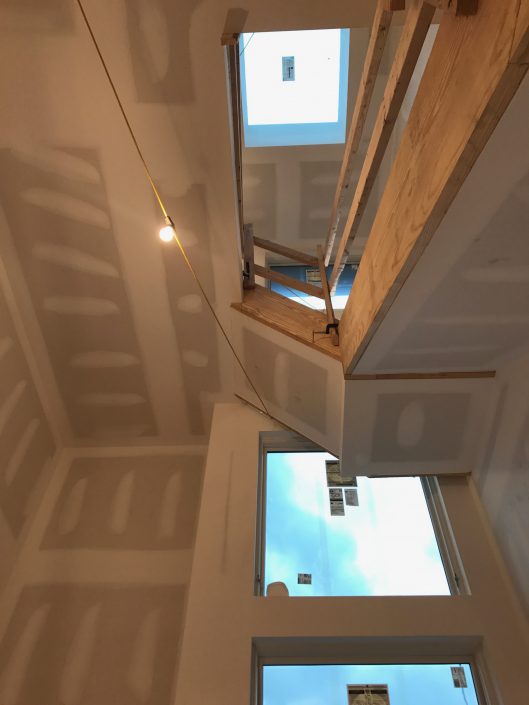 But there is a difference: you enter the home through this dramatic skylit stairwell just inside the front entrance. 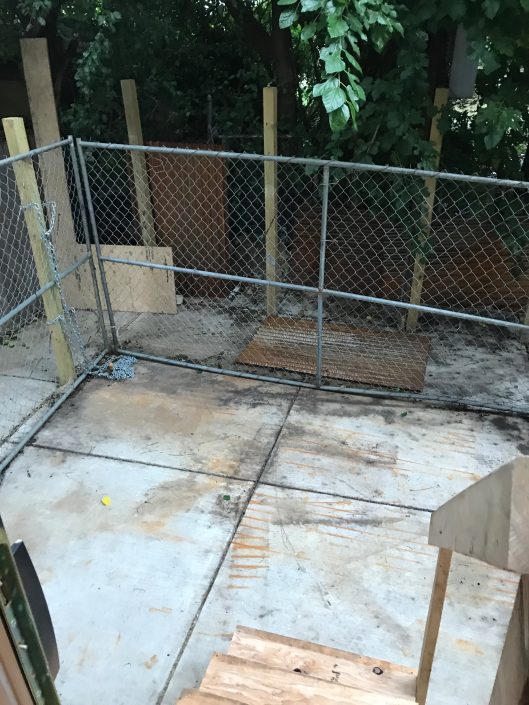 The sliding doors at the rear open onto steps leading to a paved rear patio. 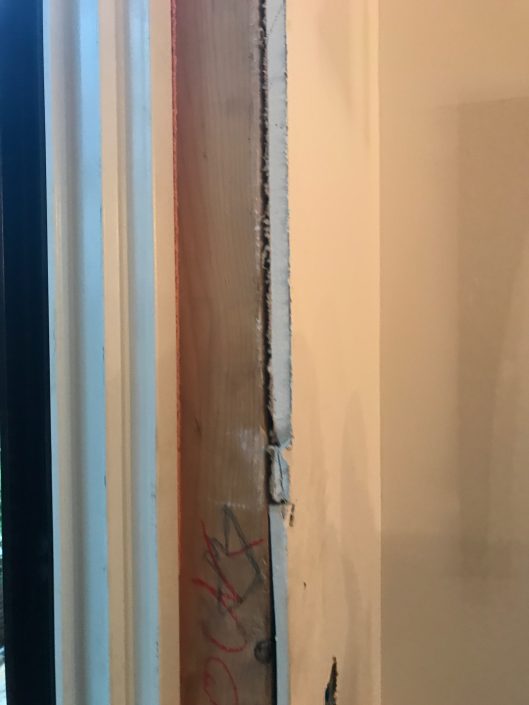 You can't see it, but sandwiched in between the drywall and exterior wall is steel framing, fabricated in Red Oak's own shop just down the block. 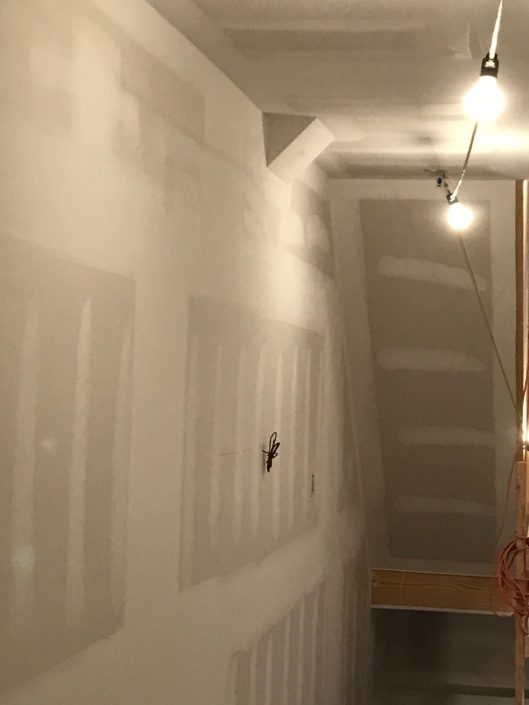 Red Oak also manufactured the thicker steel brace that protrudes into the main floor here. This brace preserves the home's lateral stability, made necessary because the upper floors stop short of the front wall. 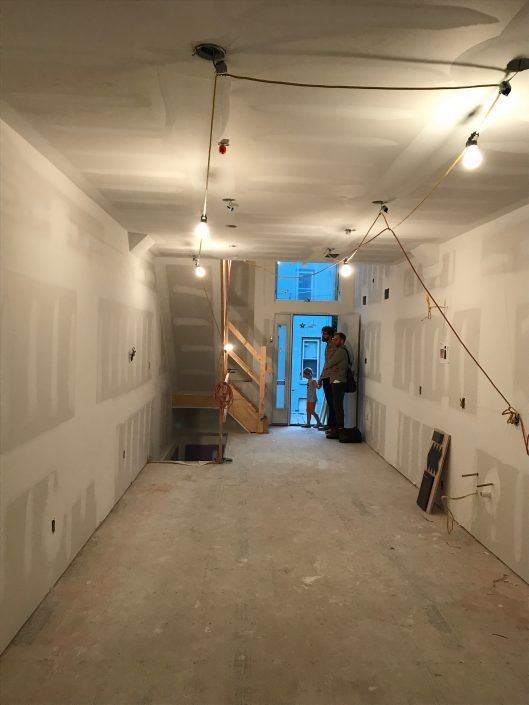 The view from the kitchen towards the front door. Architects Ian Toner of Toner Architects and Jeremy Avellino of Bright Common are standing in the doorway. The two also collaborated on 2401 Emerald St. 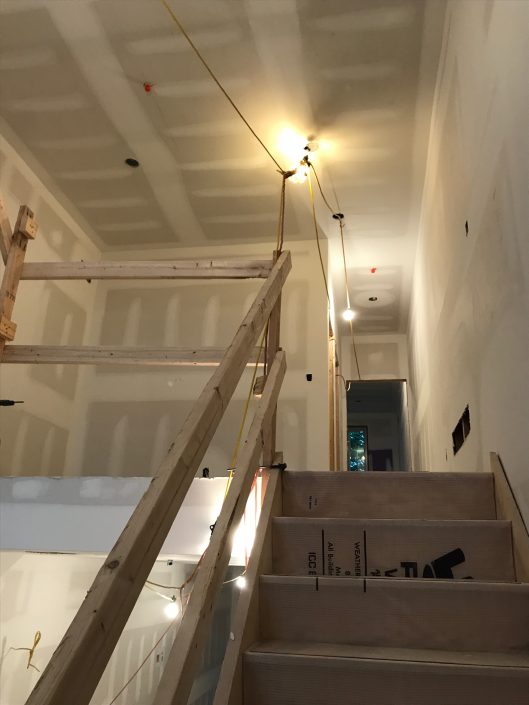 The creative placement of the stairwell also creates seating areas on the front of the upper floors. The second-floor area is the larger one and overlooks the entrance. 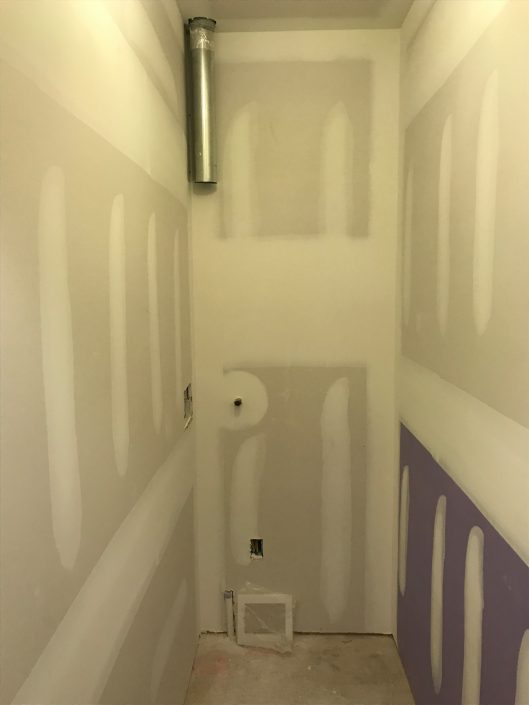 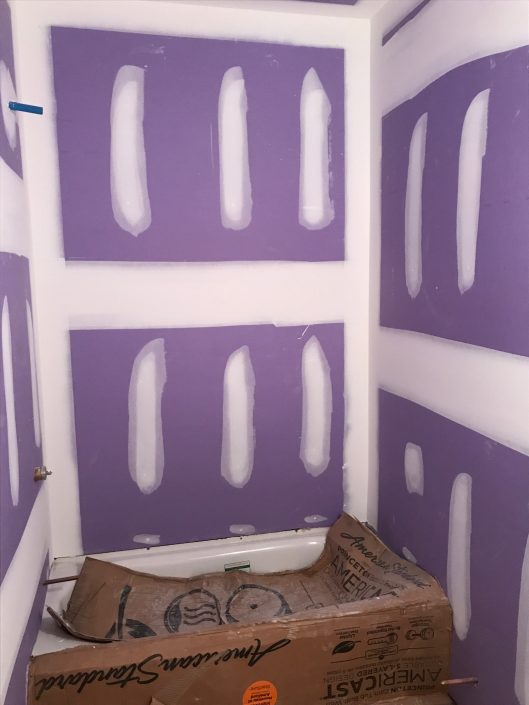 The second-floor bathroom, with the tub already installed. 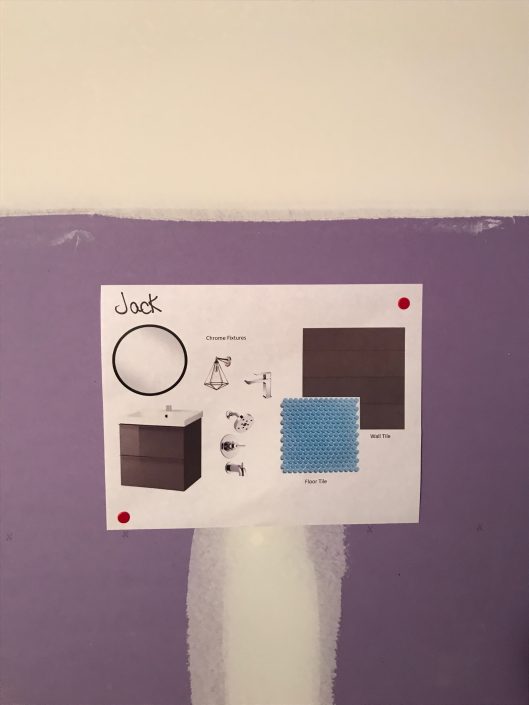 A finish and fixture spec sheet for this home's bathroom... 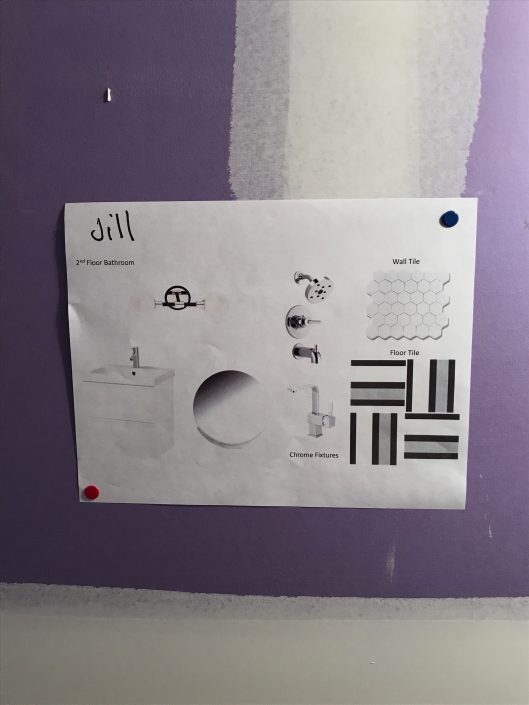 ...and one for its sibling. 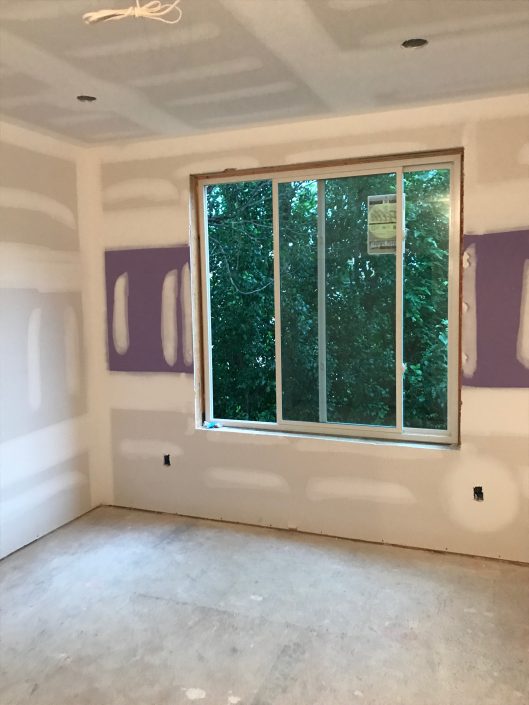 A large window brings plenty of light into the second-floor bedroom. 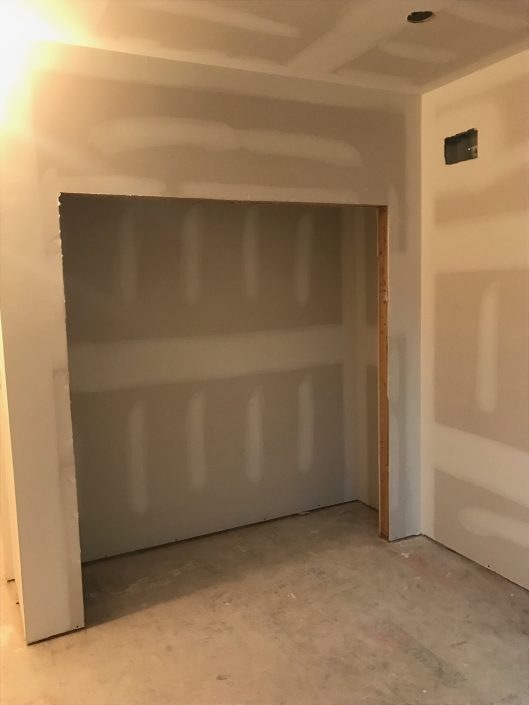 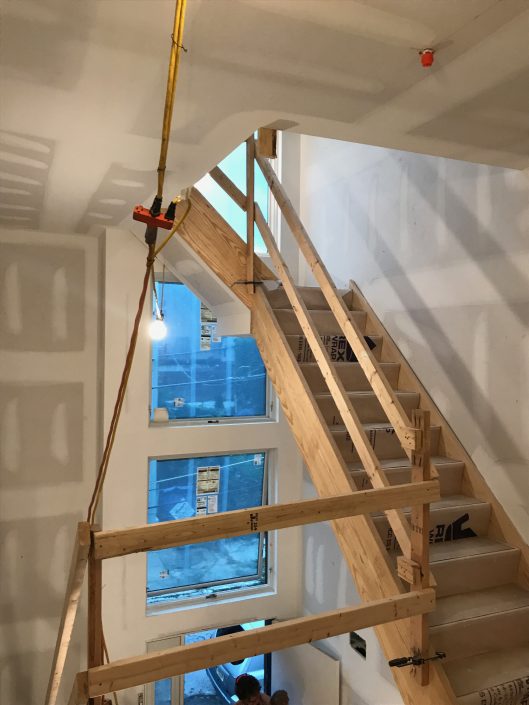 The stairway to the third floor. 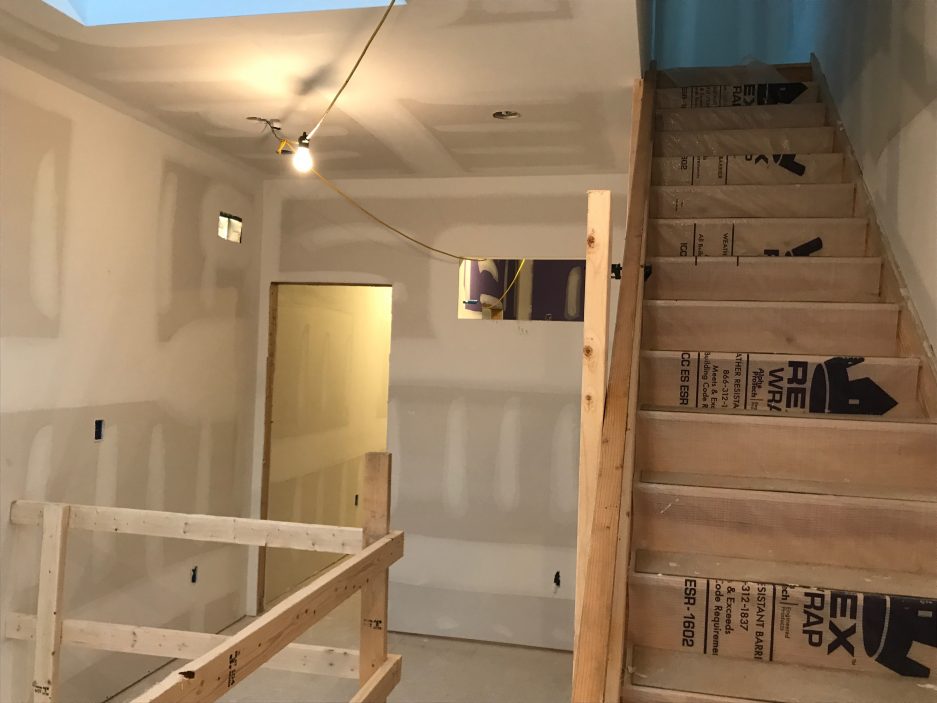 The third-floor seating area, with the stairs to the roof deck at right. 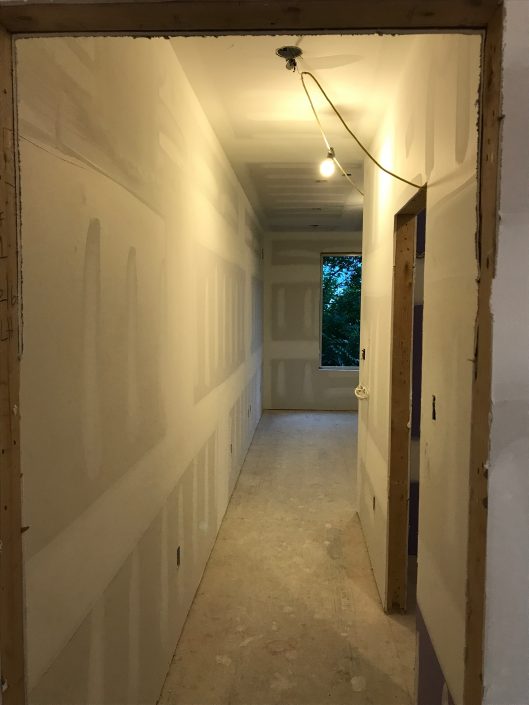 The hallway to the master bedroom. 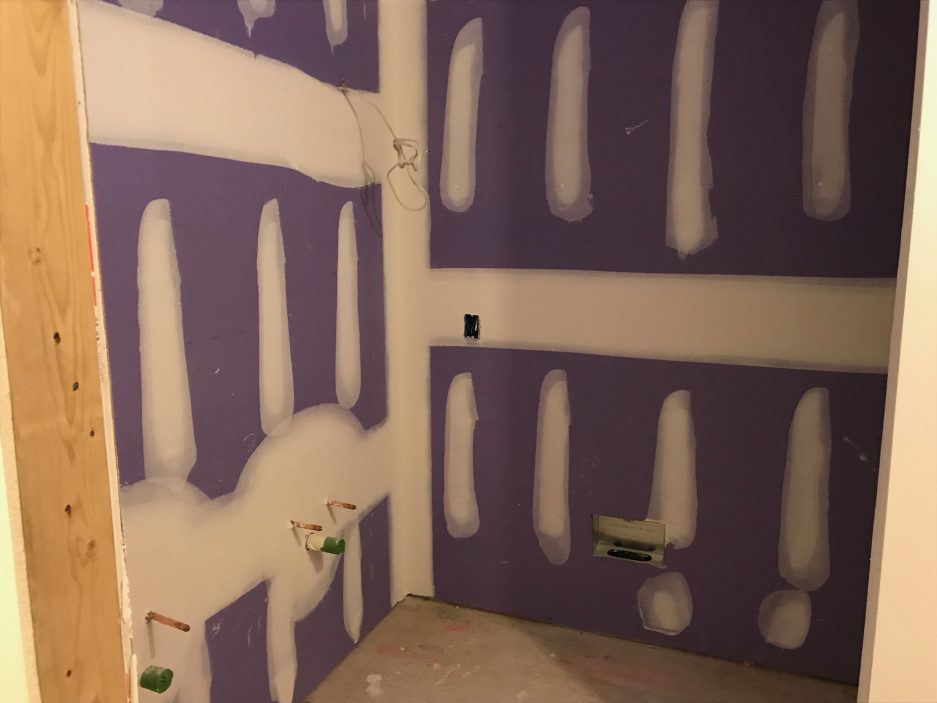 The master bathroom, with the dual vanity pipes on the left. 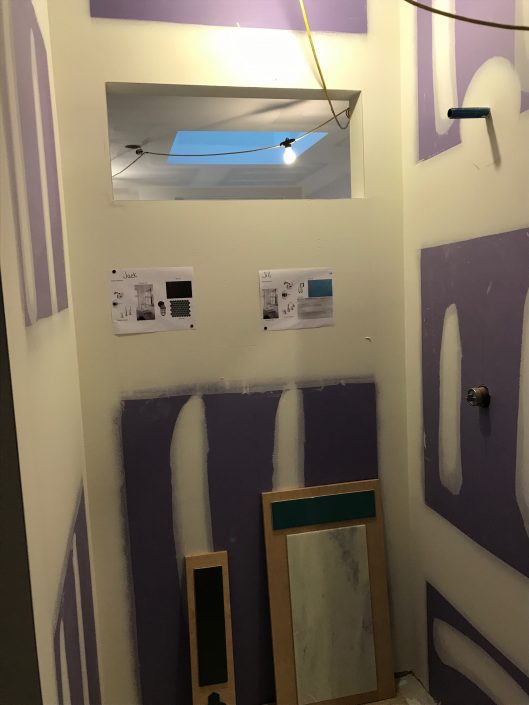 The shower enclosure in the master bathroom will enjoy natural light through the window in the back. 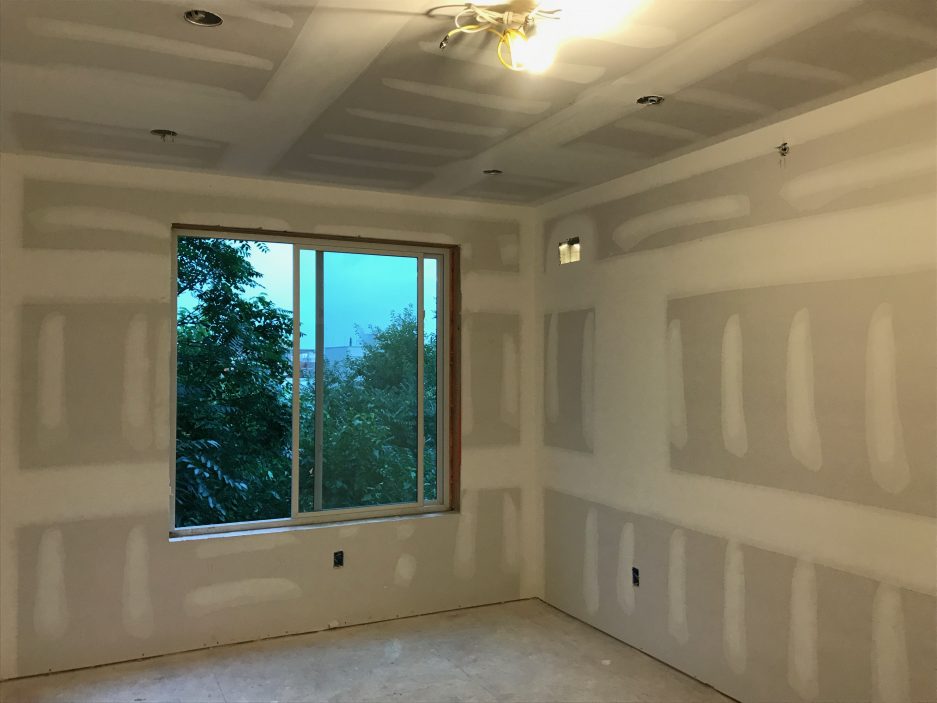 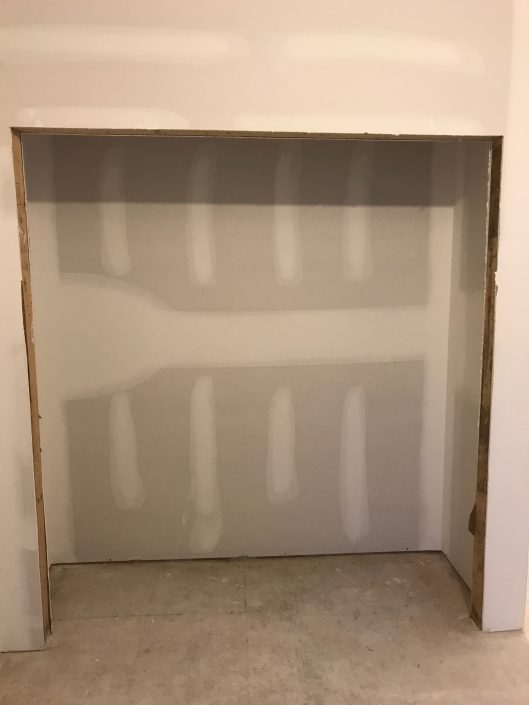 Giacobbe explained that Red Oak faced a choice in designing the master bedroom: A huge walk-in closet or more space in the room itself. They chose the latter. 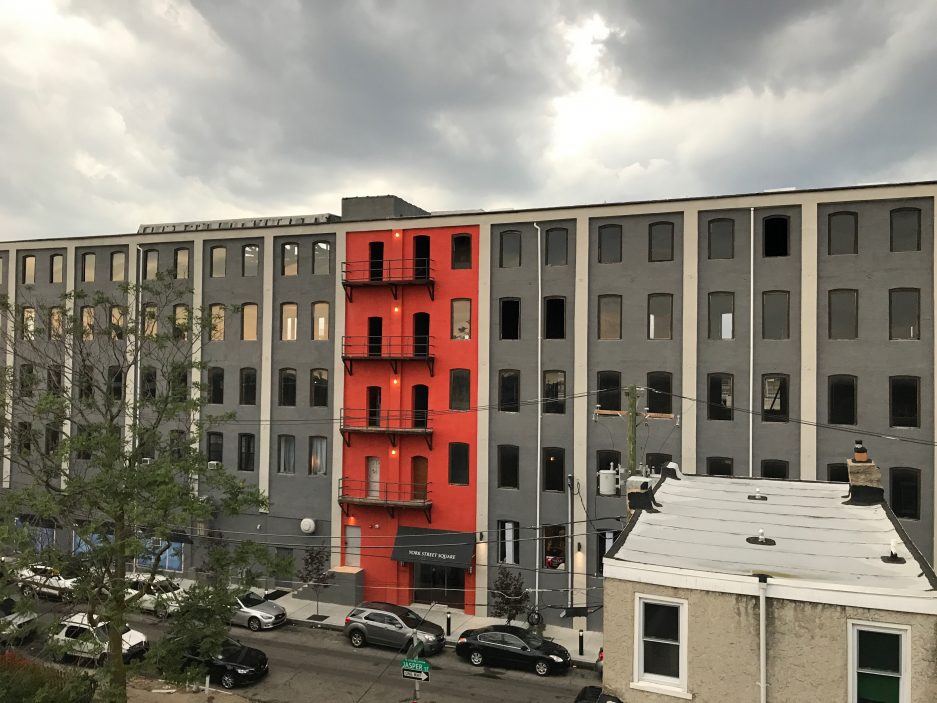 The roof deck offers a 360-degree view. To the north, the unfinished York Lofts building. 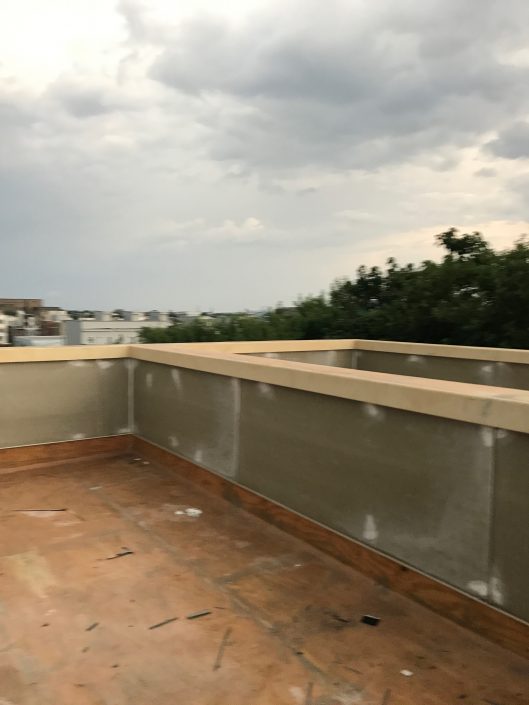 To the northeast, the homes of East Kensington. 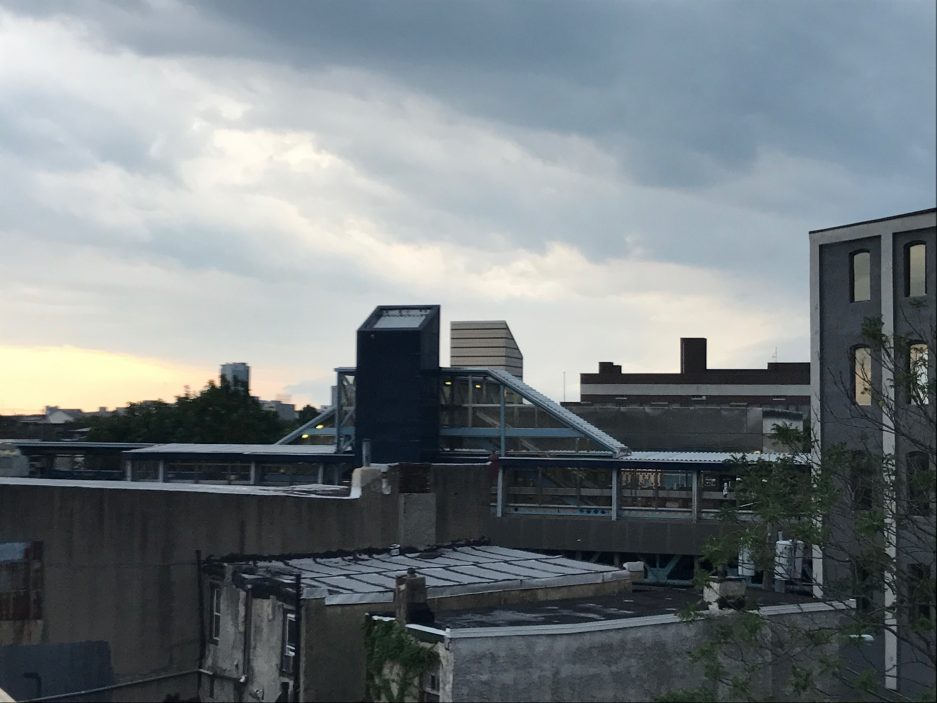 To the west, York-Dauphin El station. 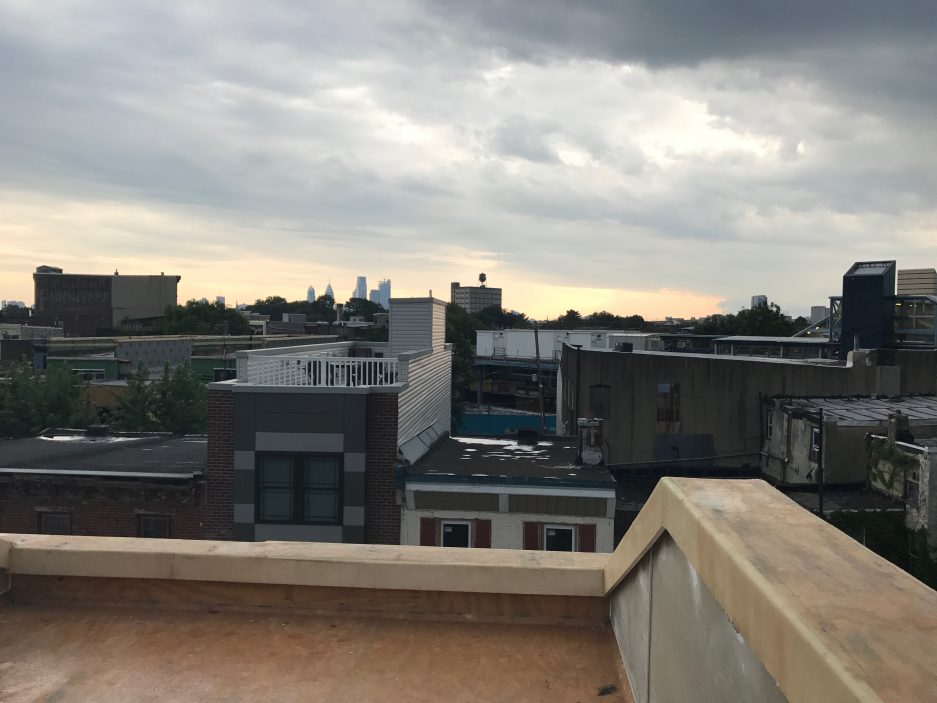 To the southwest, the Center City skyline... 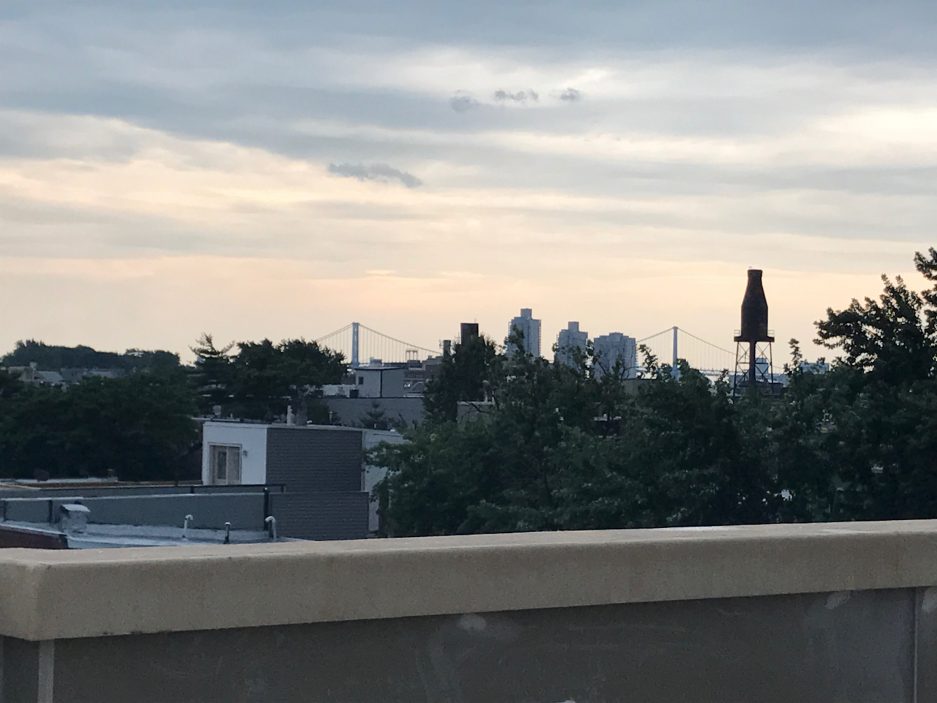 ...and to the south, the Ben Franklin Bridge and an East Kensington icon. 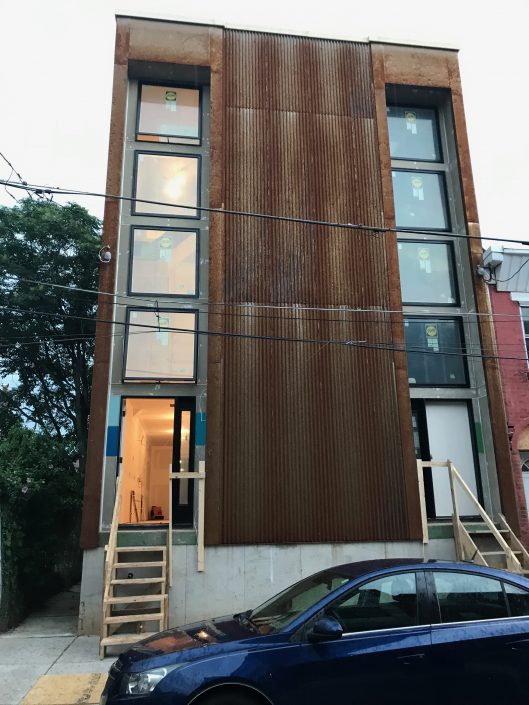 Cor-Ten steel was developed for highway bridges and other surfaces that would otherwise require repainting - it forms its own protective coating of rust, thus saving on maintenance costs. The process is under way in this photo.