Ooh La La! The Adams Gets a Parisian Makeover

Post Brothers has tapped celebrated French architect Philippe Maidenberg to design the lobby and model residences at the fourth and last tower to be rebuilt at Presidential City. 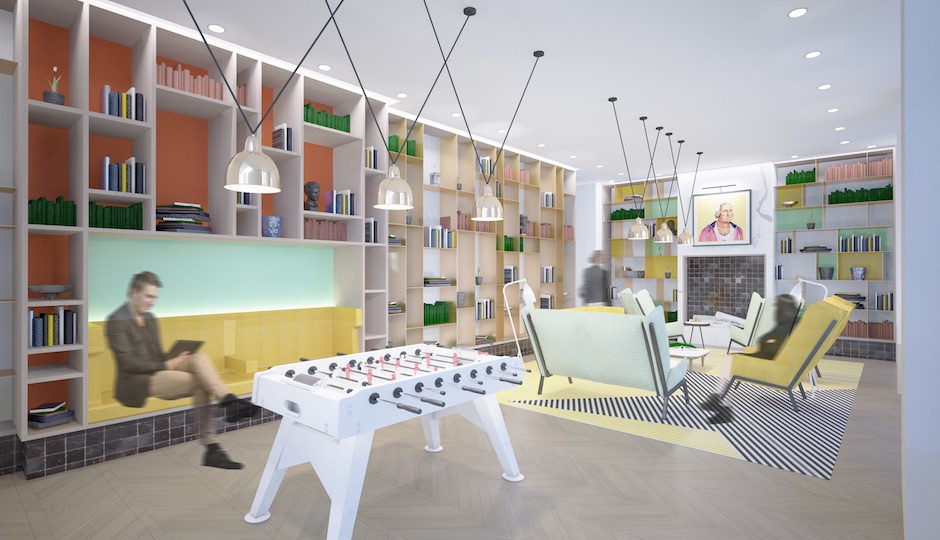 This rendering by Philippe Maidenberg shows how his use of color will enliven the residents’ lounge at the Adams.

If you’ve followed my reporting on Post Brothers, you should know that I’m a huge fan of the Pestronk brothers’ theatrical flair. Whether it’s in design, marketing or public relations, Post Brothers knows how to grab your attention and hold onto it.

Now, as they turn to renovating the last of the four towers they’re making over at Presidential City on City Avenue, they’ve taken their eye for style and talent for showmanship above and beyond their usual standard.

To do this, they’ve enlisted outside help, namely, internationally known French architect Philippe Maidenberg, who has added a dash of color and whimsy to the lobby and model units at the Adams.

(Wait. Wasn’t it Jefferson who went to Paris? No matter. Neither I nor Post Brothers insist on slavish devotion to every historical jot and tittle when invoking past Presidential glories.)

Post Brothers CEO Mike Pestronk explained why they decided Maidenberg was the right person for this renovation project.

“We’d been looking for an interior designer who could bring something new and interesting, not the same old Philadelphia stuff, to the project,” he said. “Somebody he knew reached out to someone we knew who was also looking for clients. 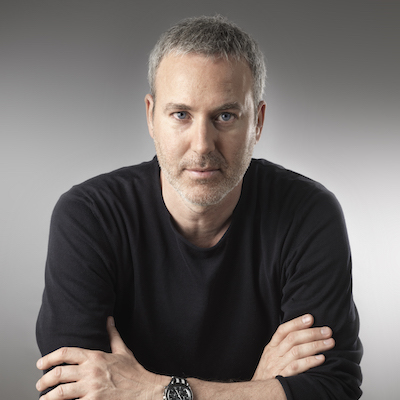 That “somebody he knew” was Maidenberg’s New York-based public relations representative. Of the introduction, Maidenberg said, “It was a surprise for me because there are so many designers in the United States and the American mentality is different from that in France, where people are more curious about new people.”

What made the connection click was that the Pestronks were looking for something other than “the American mentality” in design. “What we see in a lot of American interior design, especially when you go to New York-based people, is that things are very moody and dramatic and they take themselves very seriously.

“We wanted to make the towers all different, and our vision for the fourth tower was that it would be a more family-friendly environment. What we really wanted to do was something fun, but still sharp and not amateurish-looking.”

That pretty much describes the interiors Maidenberg gave them.

The principal element that distinguishes them from the usual American apartment building or hotel lobby is the use of bright colors throughout. It’s a Maidenberg signature that he has applied to several high-profile hotel projects in Paris, including the Joke Hotel, Hotel 34B and the Hotel 123 Sebastopol, which TripAdvisor named the number one hotel in the City of Light.

And it’s 180 degrees from the typical American residential lobby, Pestronk said. “The most expensive condos in Manhattan, the five-star hotels in the rest of the world, they’re very monochromatic, usually dark.”

Maidenberg noted that apartment building lobbies of late have come to resemble hotel lobbies more and more, as the other Presidential City lobbies do. “You don’t have a bar or a restaurant, but other than that, you find many of the same things in an apartment lobby that you find in a hotel now that the conception of what an apartment lobby should be has changed.”

The residents’ lounge as conceived by Maidenberg is part library, part rec room and all color. Bookcases with multicolored shelves, cushy, colorful modern furniture and a foosball table give the space a casual air and a touch of whimsy. 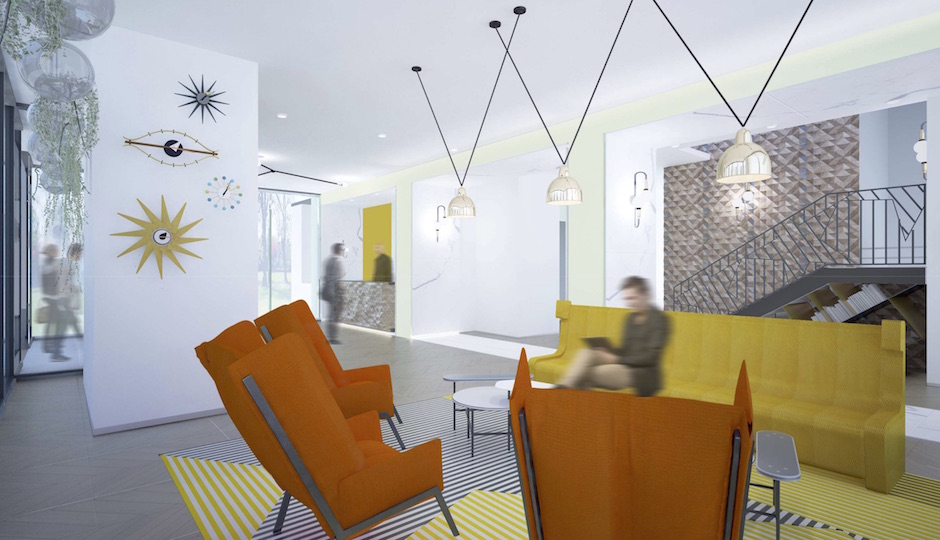 Maidenberg’s rendering of the Adams lobby.

That whimsical touch can also be found in the homages to Adams and America in the lounge and the lobby proper. “On the floor, you’ll see two rugs,” Maidenberg said. “You won’t notice it first thing, but you’ll see there are stars on the rugs and on the stair risers. And behind the reception desk there’s an artwork by a great French artist who works for companies like Chanel.” The artist wanted to celebrate America in his creation, which is a metal-and-light map of the country in which the cities are represented by backlit squares and strands of light represent the highways that connect them.

“[Maidenberg] also designed the model apartments in the building,” Pestronk said. “His themes are similar to what he did in the lobby — a little more lighthearted, more use of color and softer materials, a bit more of a welcoming and homey feel as opposed to an older or more modern aesthetic.”

Pestronk added that the distance between Paris and Philadelphia proved not to be an obstacle at all, as they were able to collaborate closely using videoconferencing via Skype. “It was actually a great process, even better than going to some local designers because of his professionalism,” Pestronk said. “He delivered what he said he would deliver when he said he would deliver it.”

The renovations should be complete by the end of May.