A First (And Last*) Look at the New Mormon Temple

*That is, it's the last chance anyone who's not a Mormon will have to see this palatial edifice - unless they sign up for the public tours that run from Aug. 10 to Sept. 9. The “sealing room” in the temple, where Mormon couples are joined together for eternity. | Photos: © 2016 by Intellectual Reserve, Inc. unless otherwise noted

“Like Solomon’s Temple, we seek to use the finest materials and the highest quality craftsmanship in our construction,” Elder Larry Y. Wilson of The Church of Jesus Christ of Latter-day Saints said as he welcomed the news media to this morning’s tour of the new Philadelphia Pennsylvania Temple, the first Mormon temple in the Keystone State and the 152nd to be completed worldwide.

That commitment to quality showed in ways large and small throughout the four-story, 208-foot-high structure, the most unabashedly historical of the LDS Church’s recent efforts. This, Wilson explained, was because “the church has tried to interpret the history and the architecture of this city in the construction of the temple.”

Not to mention the history of the LDS Church itself. Wilson, who oversees the operations of the church’s temples, explained that Pennsylvania holds a place of significance to Mormons because the founder of the faith, Joseph Smith, was baptized in the Susquehanna River in northeast Pennsylvania after hearing the call to re-establish the ancient Christian church in a glen in upstate New York. In addition, noted Elder Milan F. Kunz, the highest-ranking church official in the Northeastern United States, half of the church’s other sacred text, the Book of Mormon, was translated in northeast Pennsylvania.

It was clear from the tour that the church spared no expense in making this structure one of the most solid and substantial buildings constructed in the city in recent years. Italian and Egyptian marble, wood, brass, bronze, golden trim and Swarovski crystal each made appearances as the group progressed through the building, designed by Perkins + Will and FFKR in the Georgian Revival style.

And as befits a structure designed to bring the faithful closer to God and promote contemplation, the temple is perhaps the quietest building in the city: not only are the noises of the outside world shut out, but even the air conditioning system makes nary a sound. (Once the temple is consecrated in mid-September, there will be some noise in the form of soft organ music, presentations on church teachings and the performance of the sacraments of the church, the highest of which is marriage.)

As the Mormons consider the founding of America divinely inspired, the Philadelphia temple contains many references to the historic events that took place in Independence Hall along with the usual references to the life of Christ and events in the Bible. The photo gallery below provides examples of these references while it explains the purposes for which each of the rooms in the temple is used.

Once the temple is consecrated on Sept. 18, only Mormons who receive the recommendation of their bishop may enter. But from Aug. 10 until Sept. 9, the LDS Church invites the public to come take a look around for themselves. The church expects some 150,000 people to pass through the temple during the open house period. The tours, which take place every day of the week except Sunday, are free, but reservations are required; to reserve a tour spot, visit www.philadelphiamormontemple.org or call 1-855-537-2000.

A Tour of the Philadelphia Mormon Temple 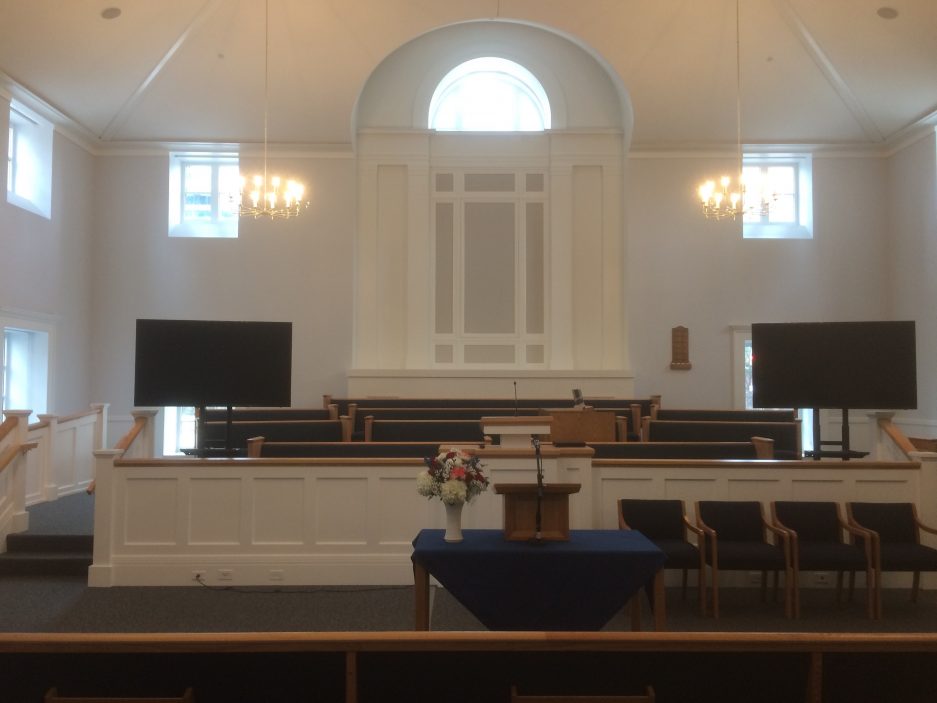 The tour started across the street in the meetinghouse, where regular worship services take place. The meetinghouse, designed by Robert A.M. Stern Architects, is simpler in detail but also Georgian Revival in character. Photo: Sandy Smith 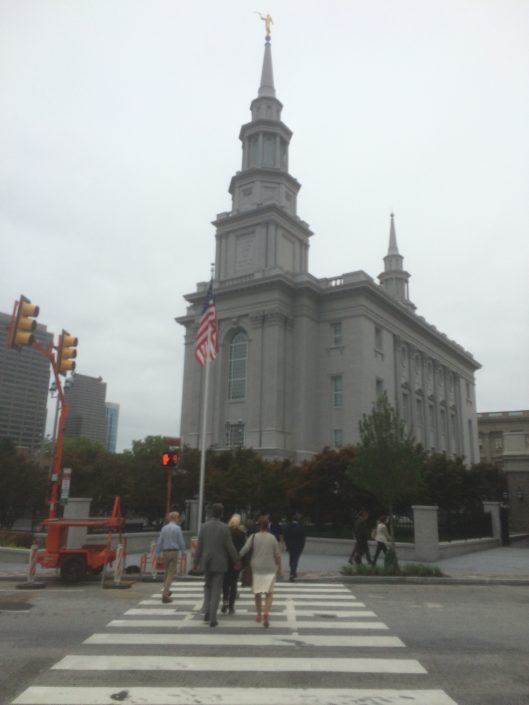 The city installed temporary crosswalk signals in front of the temple to handle the expected crowds. Photo: Sandy Smith 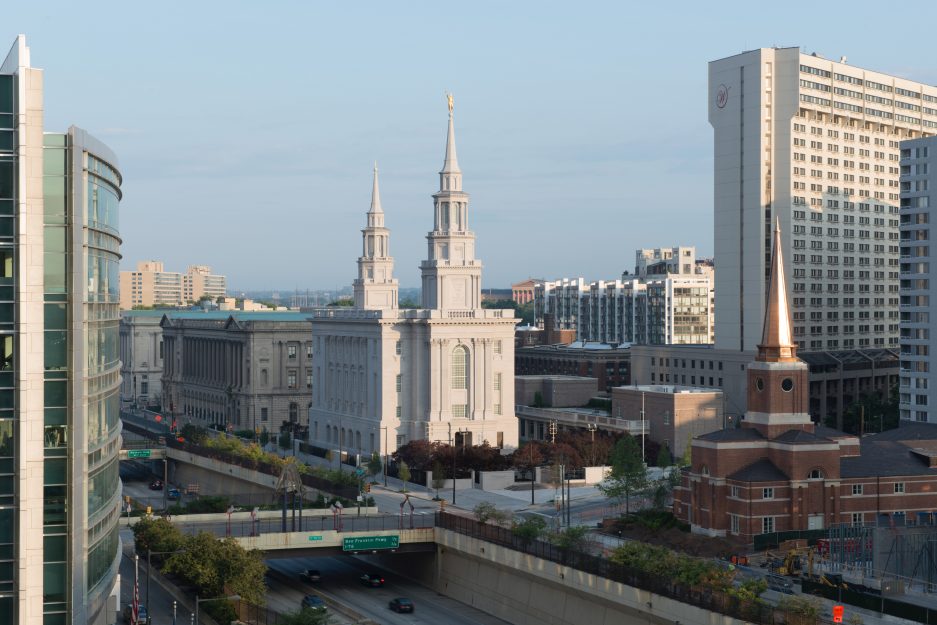 Daytime view of the temple from the east. 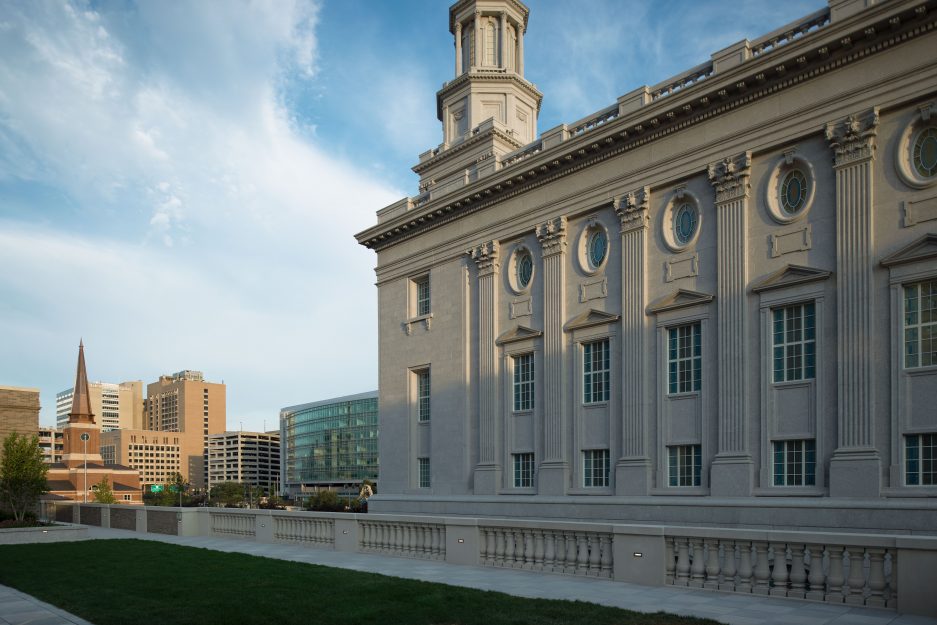 Most recent LDS temples have been constructed in contemporary architectural styles, but the LDS Church chose Georgian Revival for the Philadelphia temple because of its connection to the city's Revolutionary Era heritage. 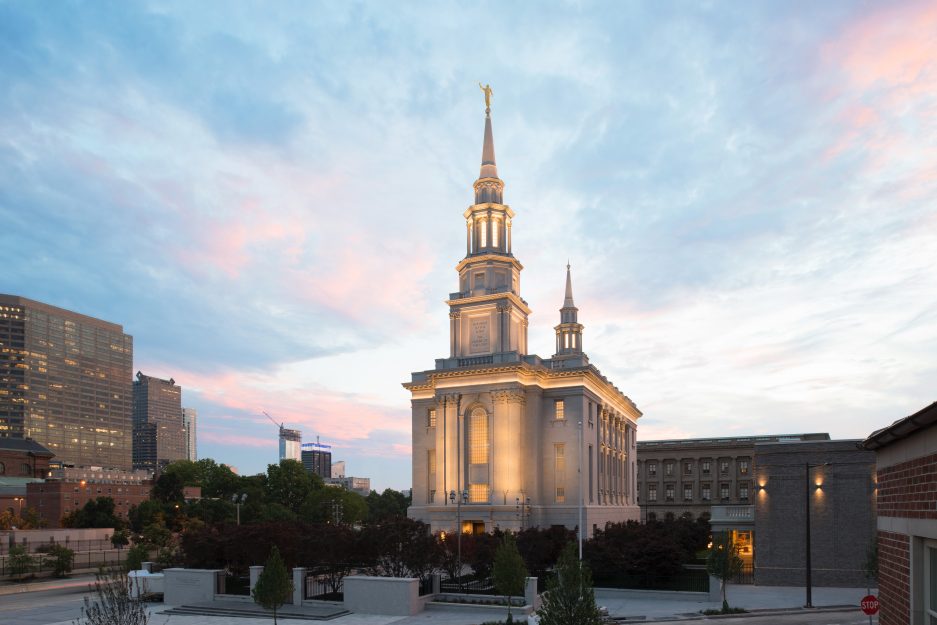 A view of the temple at sunset. While the architecture is in keeping with that of the city's most historic buildings, the choice of granite as the exterior material as well as its dimensions gives it much more heft than the modestly scaled originals. 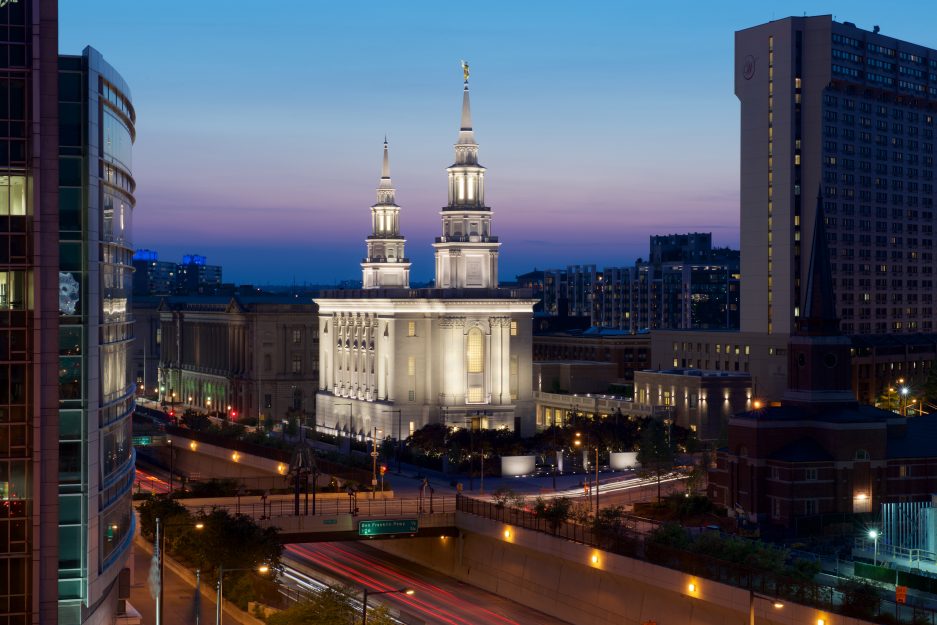 A view of the temple at night. The church had a lot on Broad Street above Callowhill as its first choice for the temple site, but environmental concerns made that site unfeasible, so the temple wound up here instead. LDS Church member and NBC10 sportscaster Vai Sikahema said that "We believe things have a way of working out." 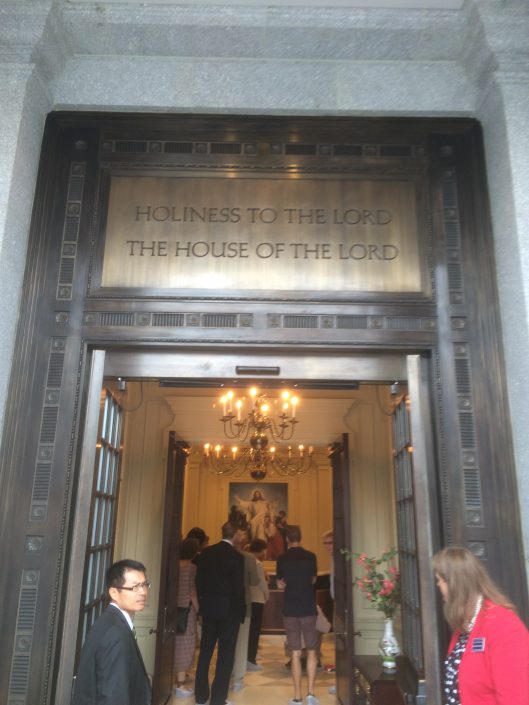 The inscription over the main entrance to the temple. Photo: Sandy Smith 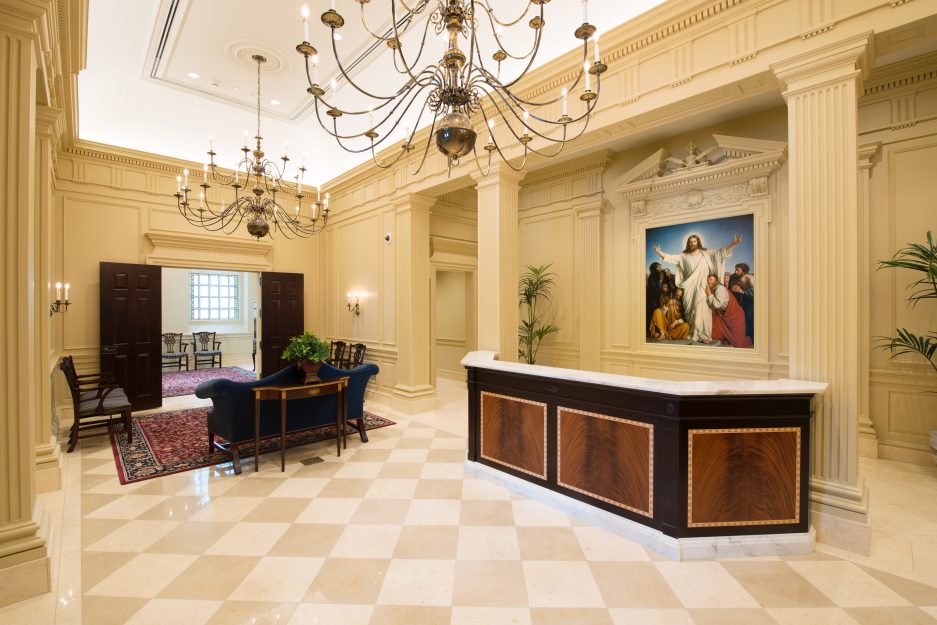 The temple foyer contains the "recommend desk," where Mormons present their authorizations to enter the temple. 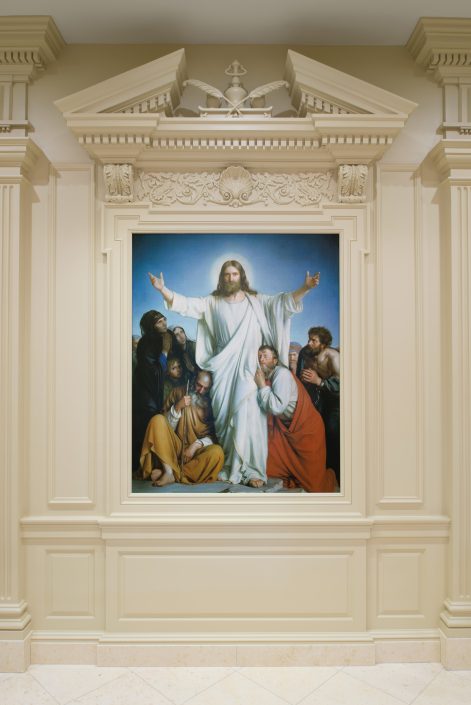 Behind the recommend desk is a reproduction of a painting of Jesus Christ by Danish artist Carl Bloch (1834-1890). "We think Mormons know more about Carl Bloch than the Danes do," Koons said. The crossed quill pens above the painting refer to the signing of the nation's founding documents in Philadelphia and the translation of the Book of Mormon in northeast Pennsylvania. 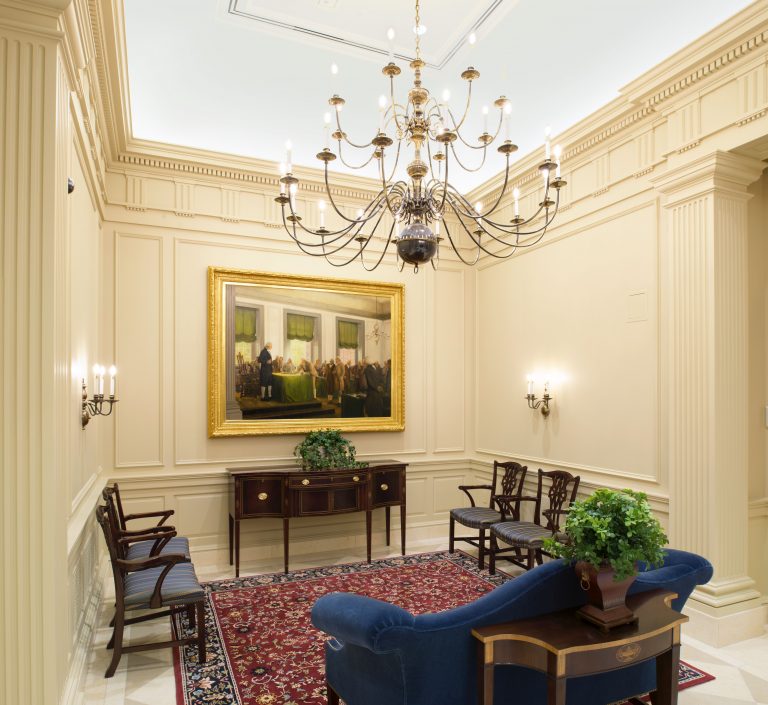 Mormons waiting to enter the temple may relax in the waiting room to the left of the foyer. 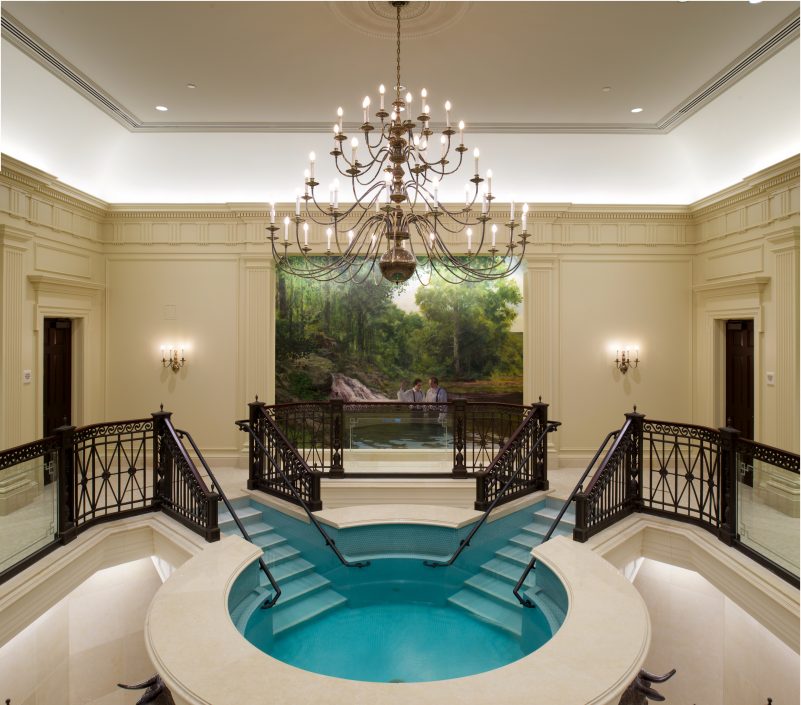 Mormons are like many Eastern religions in believing that life is eternal; thus baptism of one's ancestors can ensure their entrance into the Mormon faith (if they accept it). The baptismal fonts in Mormon temples are used exclusively by church members wishing to baptize their ancestors by proxy. The mural behind the font depicts Joseph Smith's baptism in the Susquehanna River, a rarity among Mormon temple artwork. 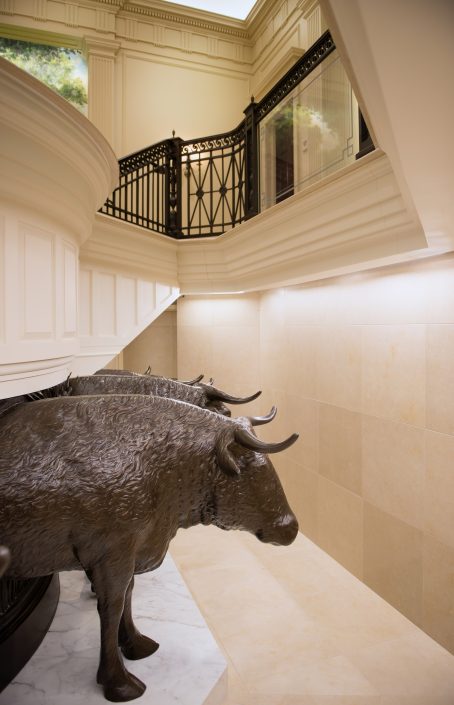 The baptistry in each temple is supported by twelve oxen in groups of three facing each of the main compass points, a reference to a description of the Temple of Solomon in I Kings. The railings (above) incorporate a wave motif found at the nearby Franklin Institute as well as the mountain laurel, Pennsylvania's state flower. 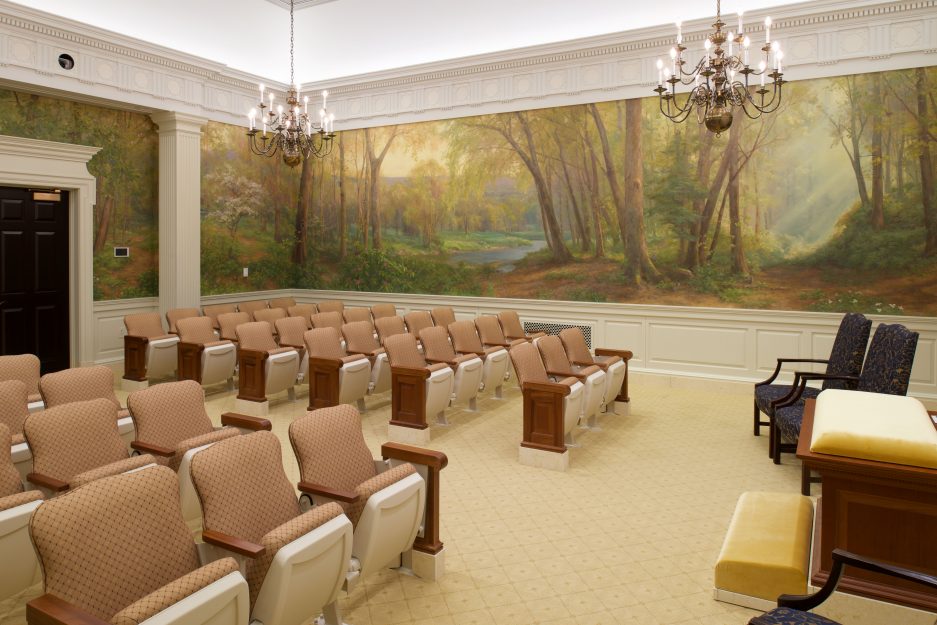 The murals in the first ordinance room on the second floor depict the upper Delaware and Susquehanna valleys as well as the upstate New York glen where Joseph Smith first heard the call to create the church. 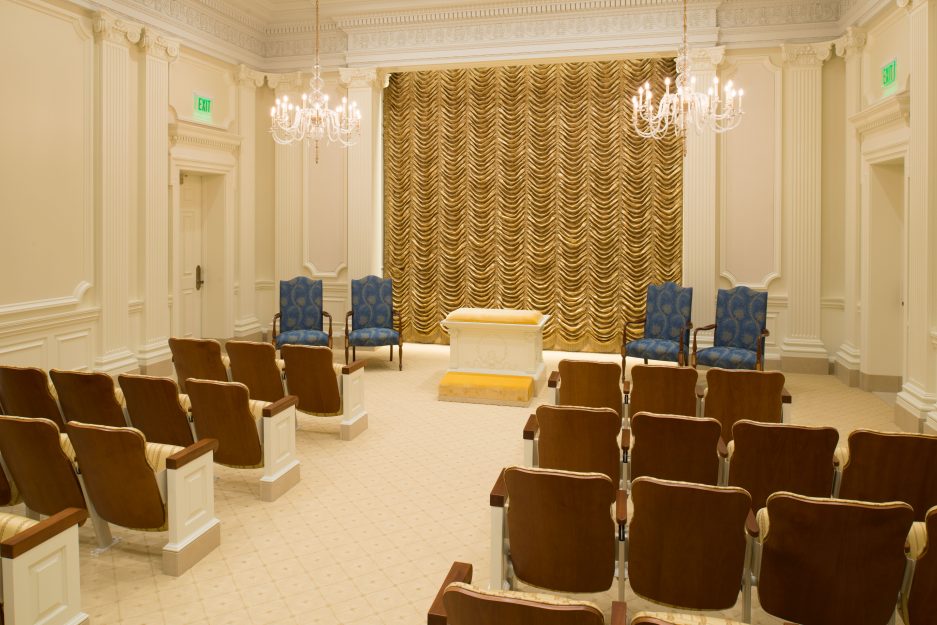 The ordinance rooms are the primary sites of religious instruction within a Mormon temple. As one proceeds through the spaces on each floor and upward from floor to floor, the decorative elements become more refined to reflect the believer's approach to God. This is the second ordinance room, where Mormons make their covenants with God. Its chandeliers are modeled on those in the assembly room of Independence Hall, where the Declaration of Independence and Constitution were signed. 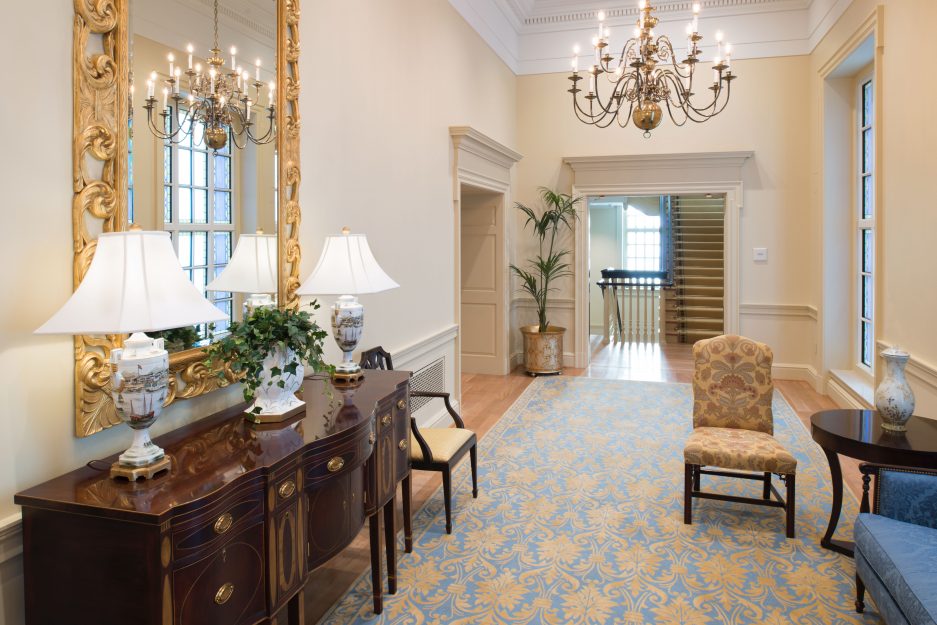 All of the furnishings and decorative objects in the temple are also designed to reflect local history and tradition. The level of elegance of the third floor hallway, seen here, is a little higher than that of the floor below it. 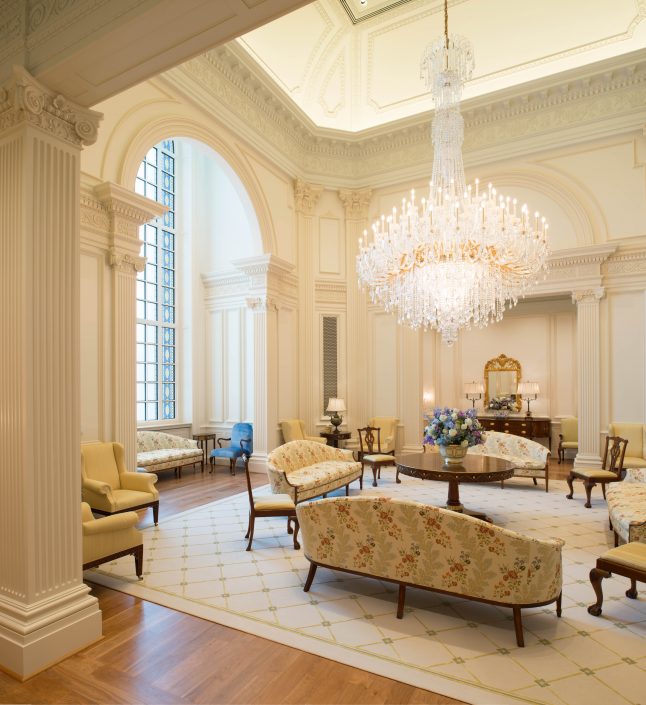 The two-story-high "celestial room" is the space where Mormons may contemplate their relationship to God and to his plan for their lives. 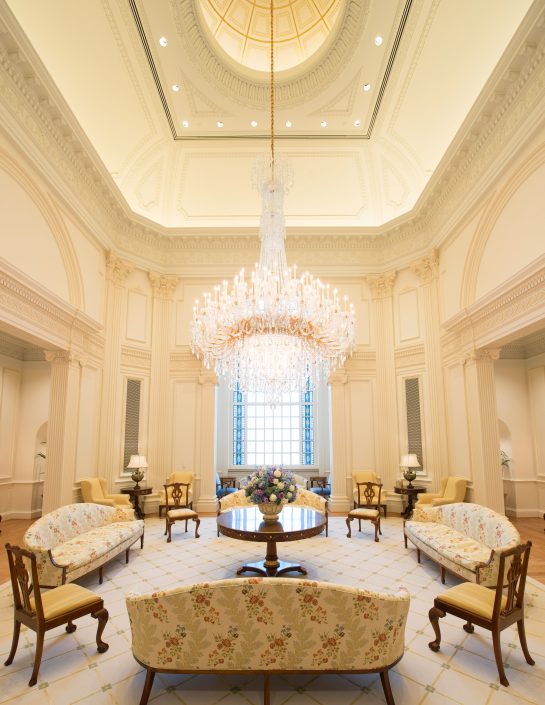 A large stained-glass window, an elaborate Swarovski crystal chandelier and recessed and indirect lighting in the dome fill the celestial room with light - again symbolizing the link between the believer and God. 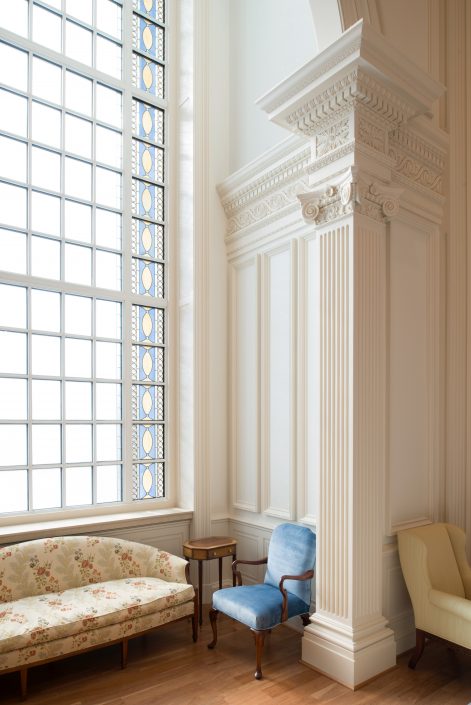 Some tour participants noted the resemblance between the colors in the temple's stained-glass windows and those of the Philadelphia city flag. A pure coincidence, said Wilson, but perhaps divinely inspired?

Marriage is the highest of all the LDS Church sacraments, so it is fitting that the rooms devoted to it are on the top floor. Shown here is the brides room, where the family and guests may welcome the bride prior to the ceremony. 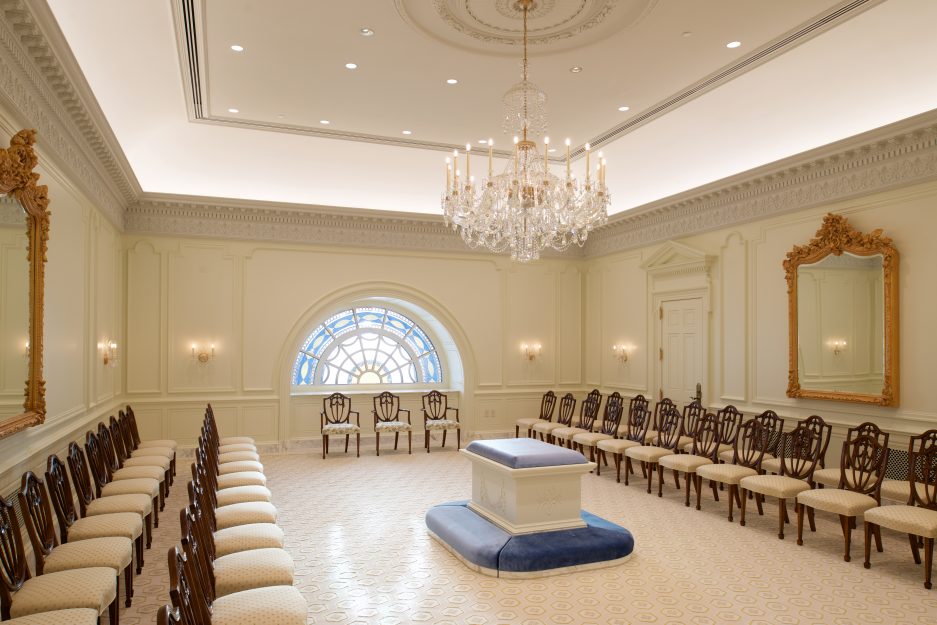 In a Mormon marriage, the wedded couple and their children are "sealed" to one another for eternity. In this room, church officials perform the sealing in front of witnesses, family members and guests who are authorized to enter the temple. 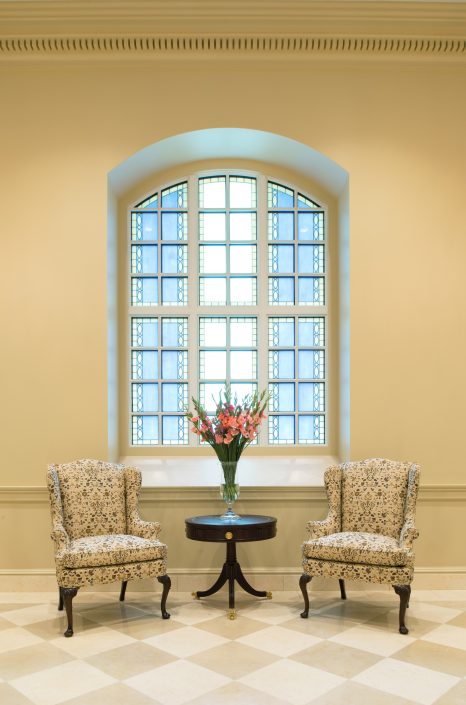 Detail of the stained glass windows and chairs found in the temple. 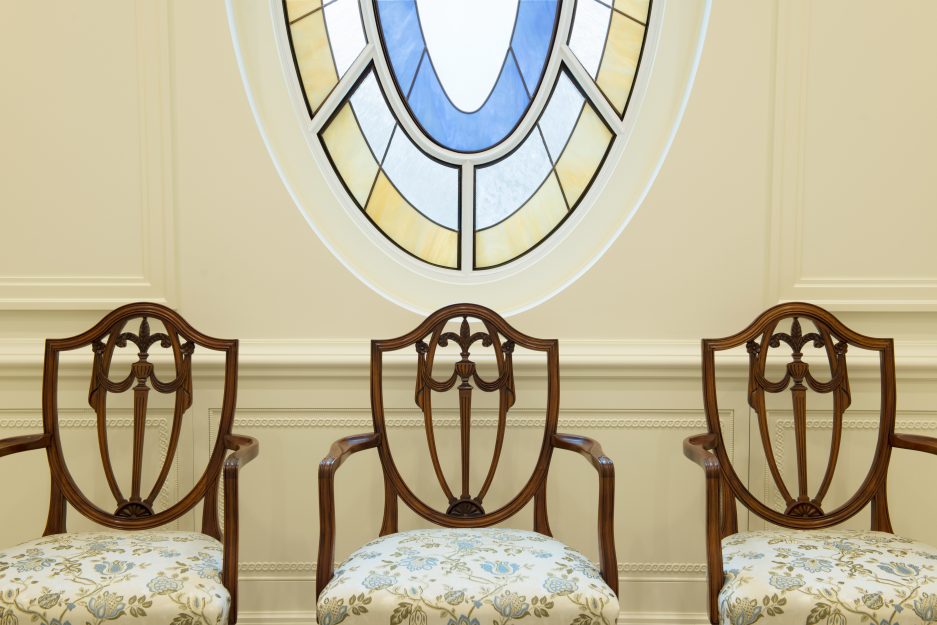 A lunette window and chairs in one of the temple's anterooms. 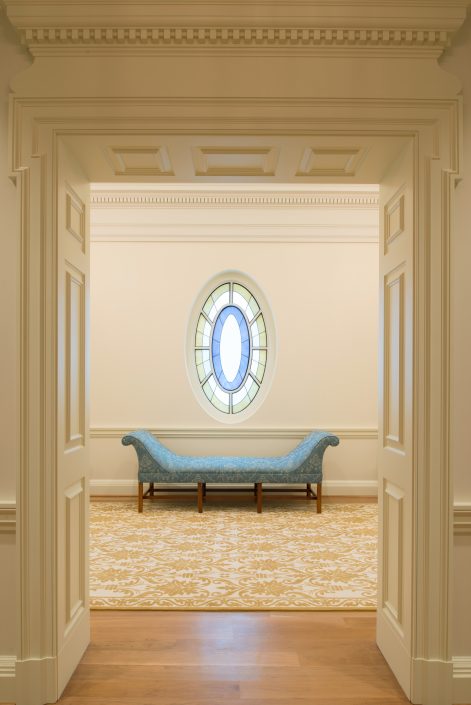 A Colonial-style bench seat and window in the temple. 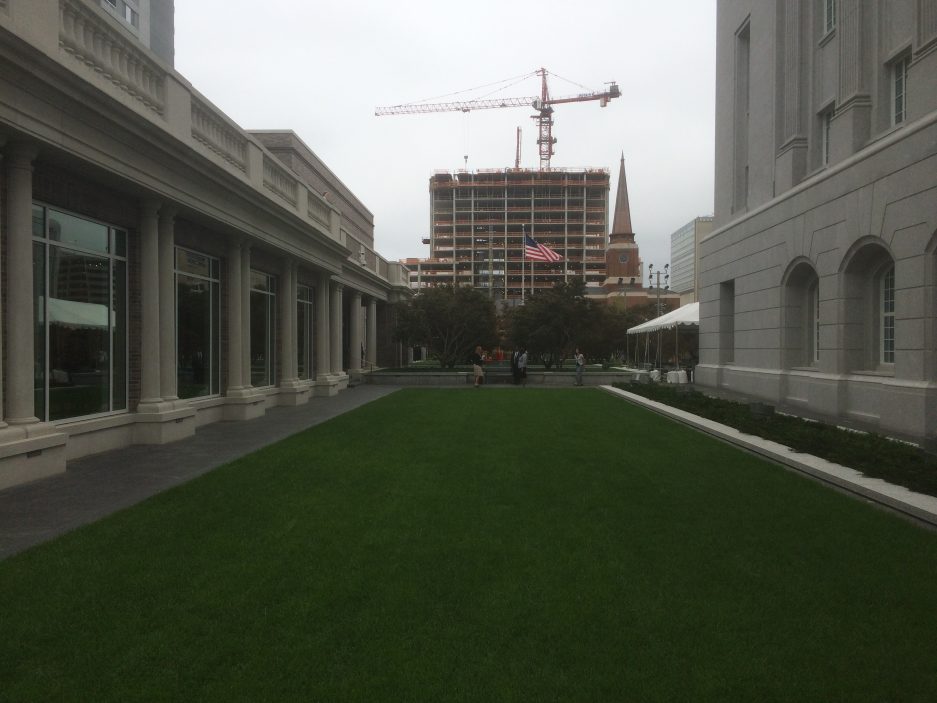 The building to the temple's left serves as a visitor center where non-Mormons may learn more about the temple and the LDS Church. Rising in the background is the Robert A.M. Stern-designed apartment tower that is also part of the larger LDS Church development that includes the temple, visitor center and meetinghouse (spire at right in the background). The church notes that property values usually rise around its projects. Photo: Sandy Smith