In Nicetown, A Green Building Celebration

Students at the YouthBuild Charter High School show off their (not yet) LEED Platinum-certified handiwork to their teachers, their corporate partners, civic leaders and curious neighborhood residents. The future of green building, clad in yellow vinyl siding, took center stage on a street just a stone’s throw from Wayne Junction Regional Rail station in Nicetown this afternoon.

The occasion was the formal ribbon-cutting for the nearly-complete rehabilitation of 2006-08 W. Wingohocking Street, two formerly abandoned homes that are being rehabbed by YouthBuild Charter High School students under the auspices of the Nicetown Community Development Corporation.

The work is being performed by students in the Green Building and Advanced Construction courses at the school along with employees of Malvern-based Saint-Gobain USA and its principal U.S. subsidiary, CertainTeed. CertainTeed also donated the materials being used in the rehabilitation project.

The materials and construction are energy-efficient and protective of the environment, so much so that the two houses are on track to obtain LEED Platinum certification from the U.S. Green Building Council. Once certified, they will be the second and third LEED Platinum-certified houses built by YouthBuild Philly students with support from CertainTeed Saint-Gobain and the fourth and fifth such structures produced under Saint-Gobain’s national partnership with the YouthBuild movement.

As is the case for projects like this, success has many parents, and the supportive family members all turned out for the ribbon-cutting celebration: Managing Director Michael DeBeradinis, standing in for called-away-to-Harrisburg Mayor Jim Kenney; City Council members-at-large Alan Domb and Derek Green, both of whom have taken a keen interest in development issues; City Councilwoman Cindy Bass, whose district office is located around the corner from these homes on Germantown Avenue; YouthBuild USA Founder and CEO Dorothy Stoneman; Carmen Ferrigno, executive director of the Saint-Gobain USA Foundation; State Senate candidate Sharif Street, and Nicetown CDC Executive Director Majeedah Rashid. In addition to the dignitaries, just about all of the 180-member YouthBuild construction crew and their teachers turned out for the event and performed a “sustainability rap” between the formal ceremony and the house tour.

The project has taken the better part of three years to complete, starting with the Nicetown CDC’s hunting down of the houses’ absentee owner, who had moved to North Carolina several years before, in order to purchase the property. Obtaining financing was also a challenge, Rashid said, because lenders are reluctant to lend to third parties not directly involved in the construction of the project. But the CDC ultimately found a willing lender, and work commenced in 2014.

The students put in long hours to work on the project, installing energy-saving insulation, mold-resistant floorboards, countertops and drywall free of volatile organic compounds (VOCs), cabinets made of locally sourced wood, super-insulated ductwork and triple-paned insulating windows that resist converting sunlight into heat. (As he gave a tour of the home still under construction, YouthBuild student Sean Tribble pointed out Saint-Gobain’s long heritage of glassmaking, from the mirrors at the Palace of Versailles that gave the company its start to its famous blue glass bottles.) The houses are also topped with solar panels, which means that on sunny days, their owners may end up selling electricity to their electric supplier rather than paying the supplier for it.

Rashid pointed out that the home would produce a triple benefit for the community. By returning blighted property to productive use, it helped the CDC meet its goal of “putting the ‘nice’ back in Nicetown” and furthered its effort to rebuild and improve the entire triangular block bordered by Germantown Avenue, 20th and Wingohocking streets. By working with the students, he said, the volunteers from Saint-Gobain and other program partners contributed to the community’s well being and the students’ future career success. And the ultra-tight, well-insulated homes would save their low-income buyers money after they moved in.

Don Pinkney, director of business development for YouthBuild, told the audience how much. “The owner of the first LEED Platinum home we built had a monthly gas bill of $108 last winter,” he said. “The average bill for a house on this block is $450 to $500.”

Pinkney suggested that even without donated materials or student labor, a typical Nicetown homeowner would come out ahead by installing the spray and blow-in insulation found in this house. “Where it might cost $1500 to put conventional insulation in a house like this,” he said, “putting in this insulation would cost $6000. But you would make that money back in about 15 months.”

But perhaps the most notable feature about these green houses is that they look just like the other houses around them. The reason for the vinyl siding (which is also VOC-free), for instance, is because the Nicetown CDC wanted the homes to match the aesthetic of the other properties they have rehabbed on this block. “These homes don’t ‘look green,'” said green building program instructor George Jenkins. “In fact, that’s what we expect people to say when they see them.” Maine Robbins speaks at the ceremony

But they do look nice. And they have exposed another batch of YouthBuild students to the possibilities of a career in construction. Not all of the students graduating from this program will go into the construction industry, though one who will, Maine Robbins, spoke at the ceremony. (He comes from a family that has worked in the industry for several generations and said that the program convinced him to follow his forebears down that same path; he will enroll in the Community College of Philadelphia’s construction management program in the fall.) Director of Vocational Training Marty Malloy explained that the school is focused on workforce development and career training broadly defined; students can also enroll in child development, health care and customer-service courses, the last of these in partnership with Starbucks. The school, established with the support of the School District of Philadelphia inside Bartram High School in 1991, became a nonprofit independent charter high school in 1998 and is considered the flagship program of the national YouthBuild movement.

For its part, said Saint-Gobain Senior Manager of Brand and Communication Dina Silver Pokedoff, the company also gets something out of its investment besides the warm fuzzy feeling that comes from having given back to the community. “Our employees learn from the students,” she said. “They’ll see the students installing insulation in a new and different way, for instance, and ask themselves why they hadn’t thought of doing it that way.” About $42,000 worth of CertainTeed Saint-Gobain products went into the construction of these homes.

“There is no other high school in the city that’s building green building units,” Jenkins said. With the support of its partners and the community, Jenkins and the rest of the school’s faculty expect to build more like these in the years ahead. 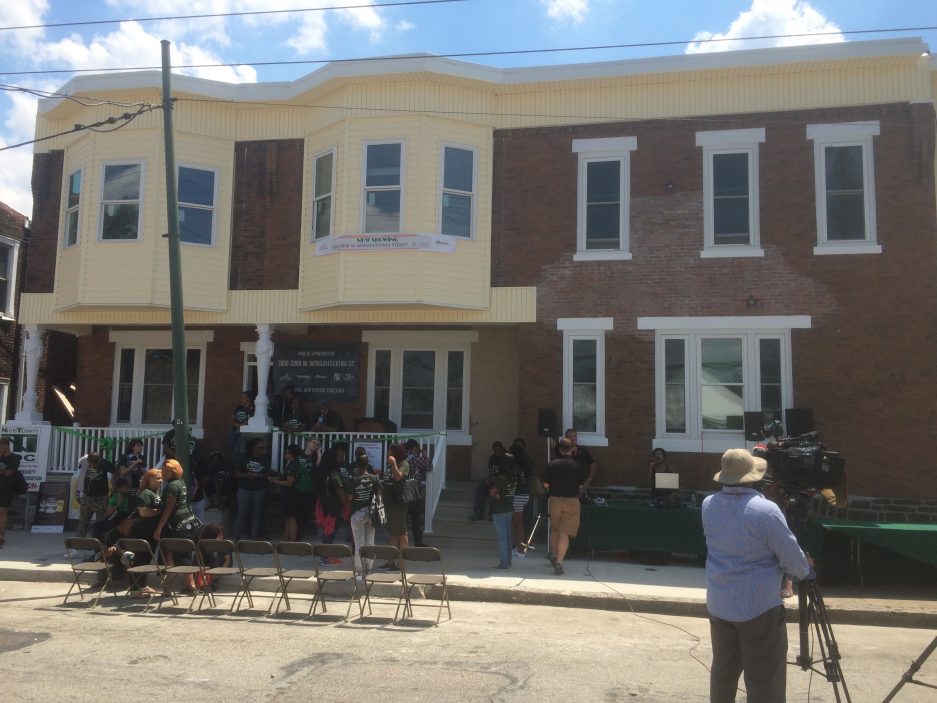 2006-08 Wingohocking Street, ready for its closeup. 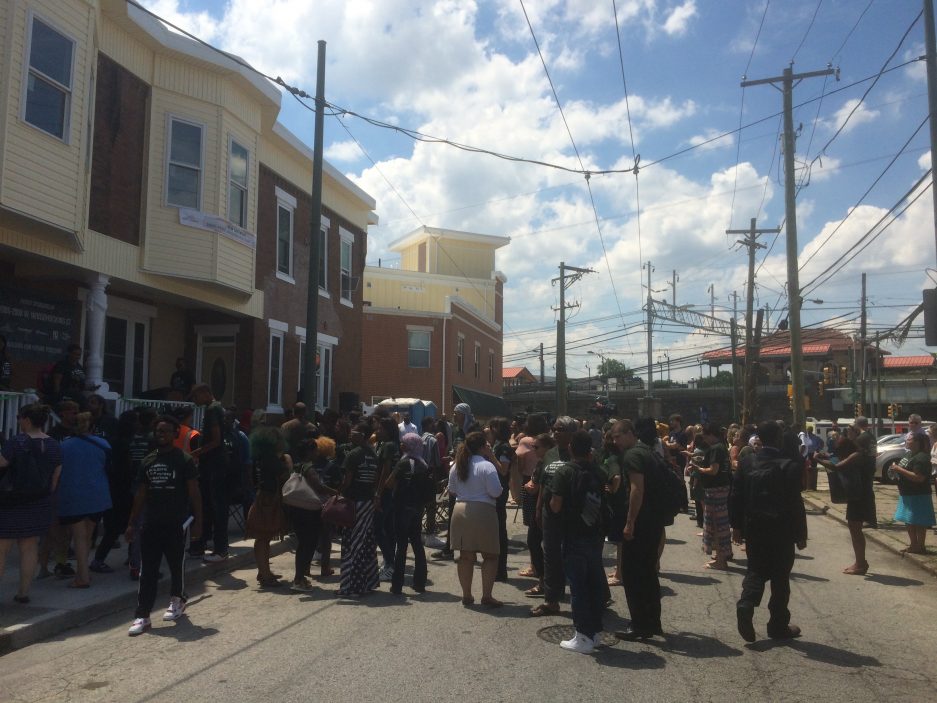 The homes are within sight of Wayne Junction train station. Three other SEPTA bus routes pass nearby, making for an easy commute from here to almost anywhere in the city. 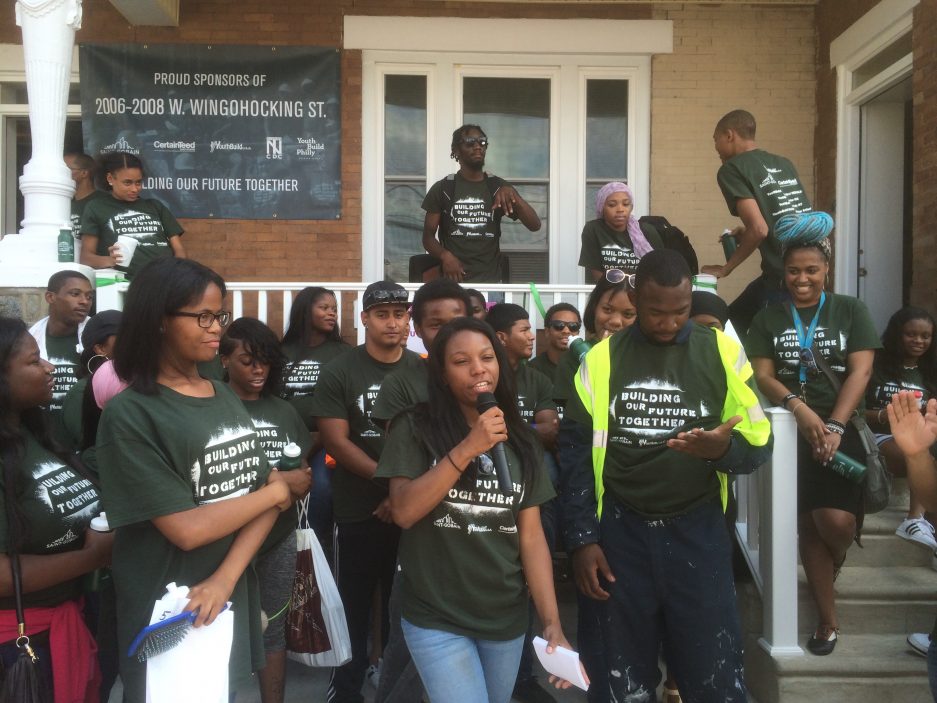 YouthBuild students perform "It's All About the Green," a sustainability rap, at the ceremony. 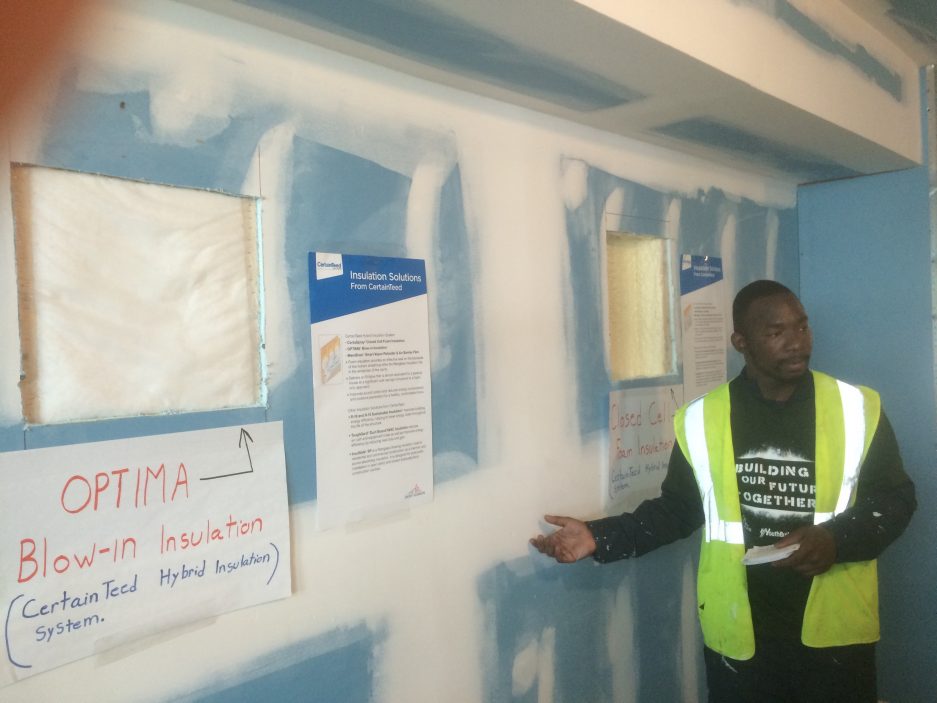 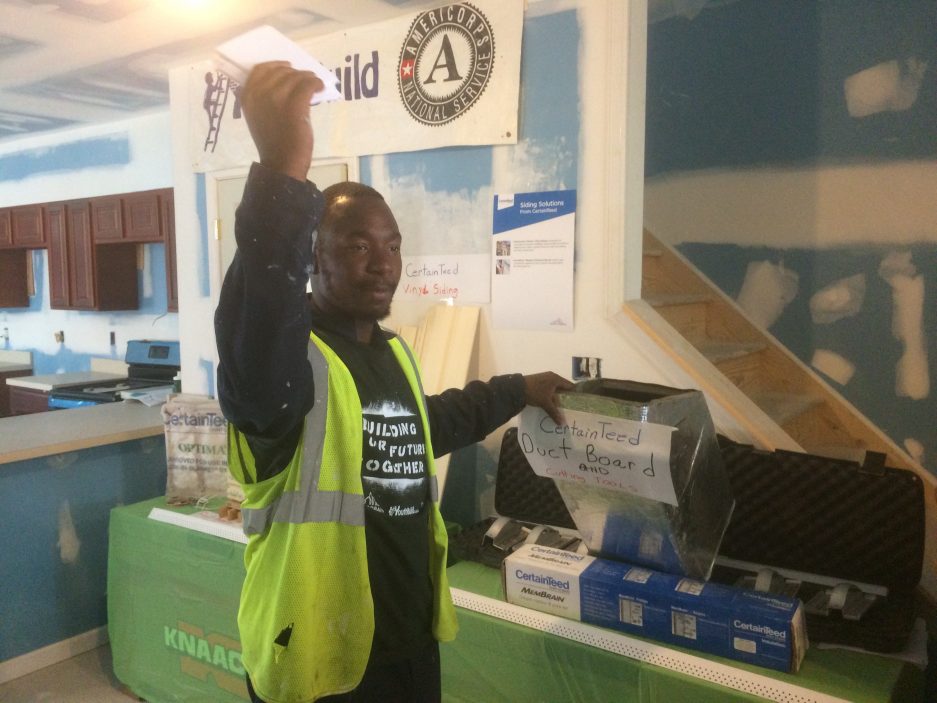 ...the insulated ductwork that also removes volatile organic compounds from the air... 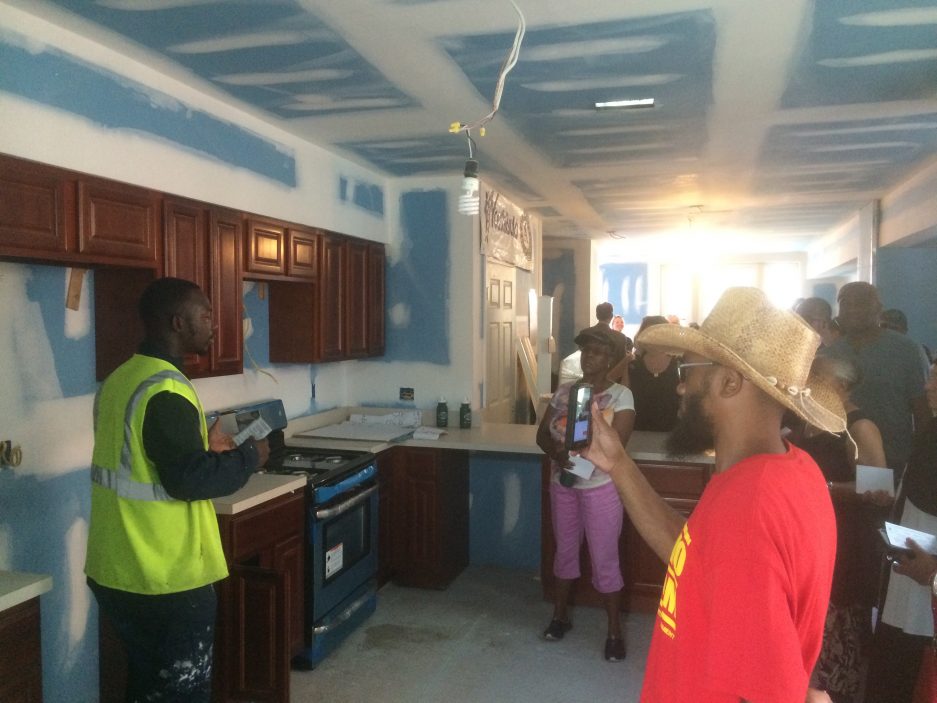 ...and the various sustainable features and high-performance components in the kitchen, including recycled wood countertops and a subfloor that resists mold and mildew, to a tour group. 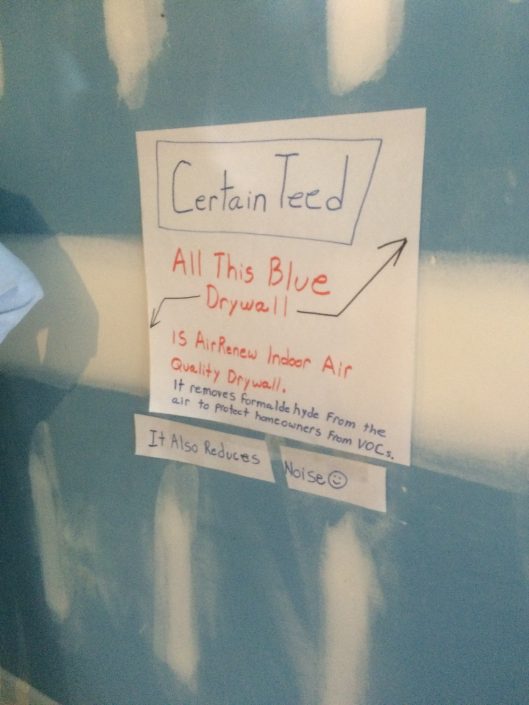 The blue drywall in the building also removes formaldehyde and other harmful compounds from the air while reducing noise... 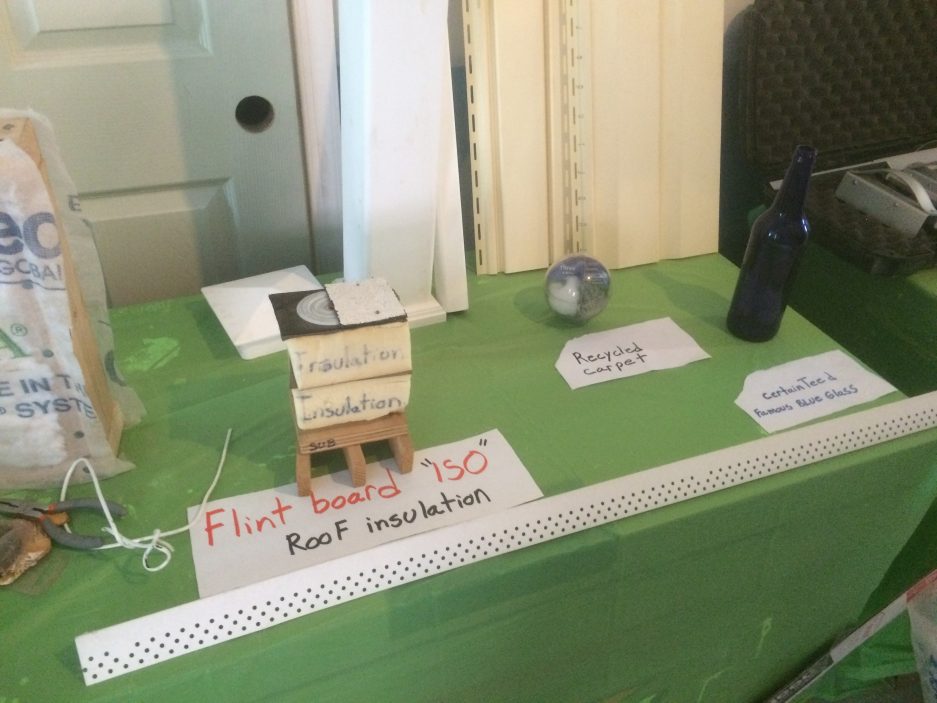 and the extra roof insulation increases its insulation factor from R38, the usual standard, to R53. These are among the most important energy-saving features of the homes. 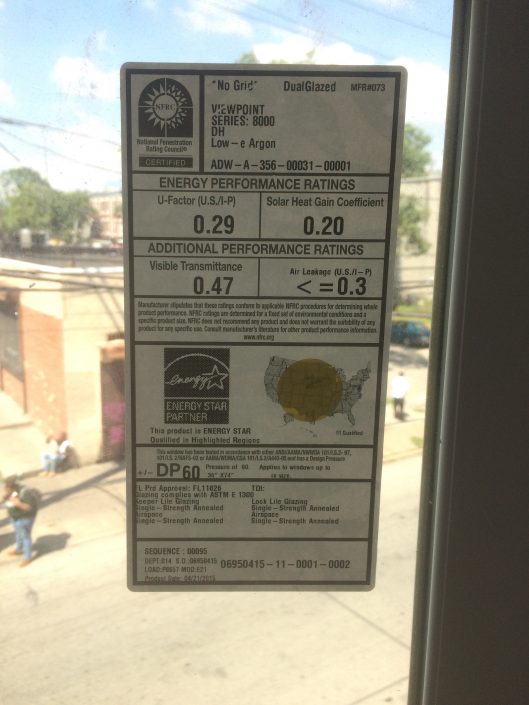 The windows, however, also do their part. The low sun gain number means very little of the sunlight that strikes the windows is converted into heat, and the windows are triple-paned for extra insulation. 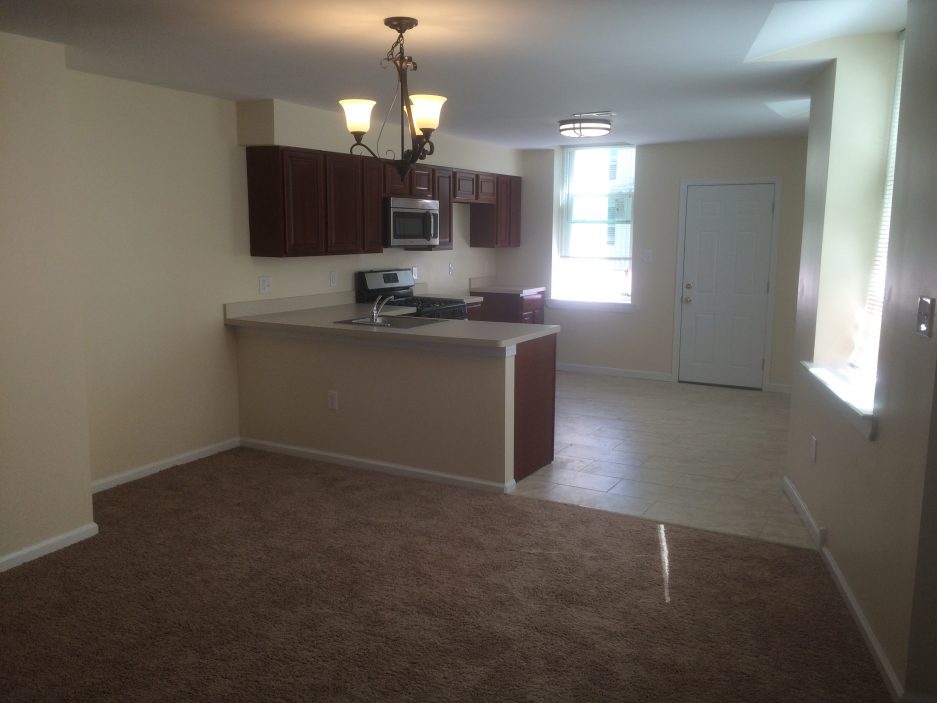 2008 is complete except for the laundry equipment. This is what the finished kitchen looks like. 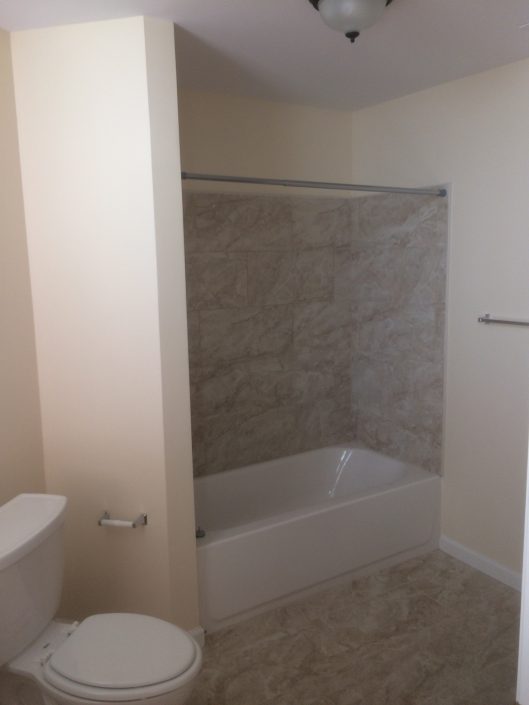 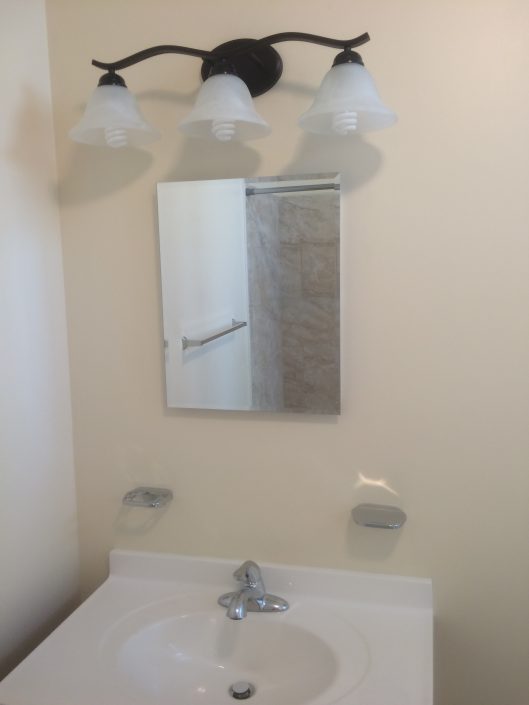 ...and a handsome vanity. 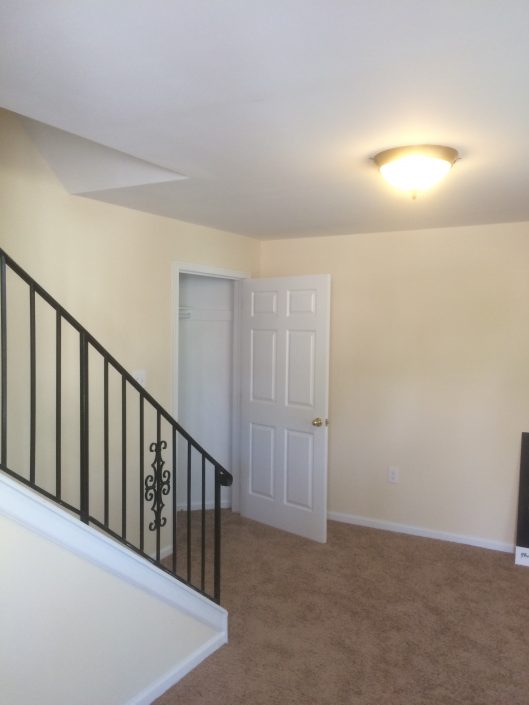 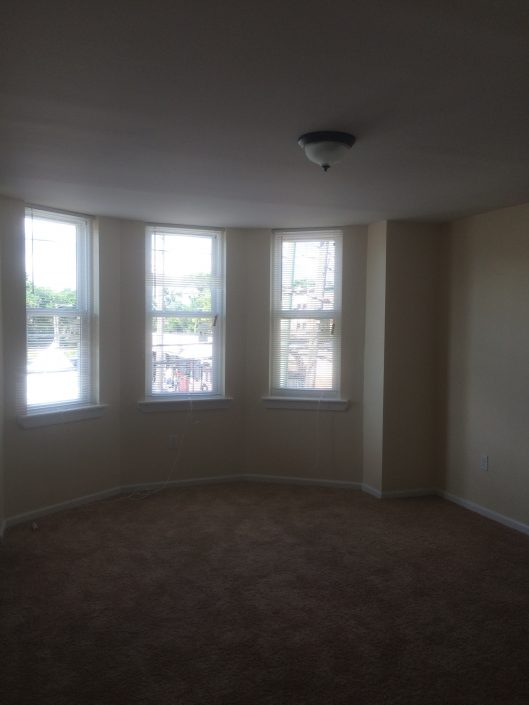 The largest of the three bedrooms has a bay window. 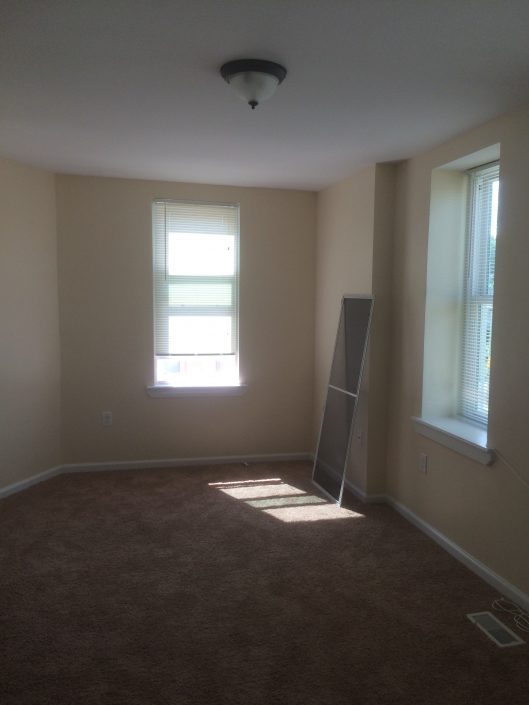 The other two bedrooms get plenty of light from the large windows. 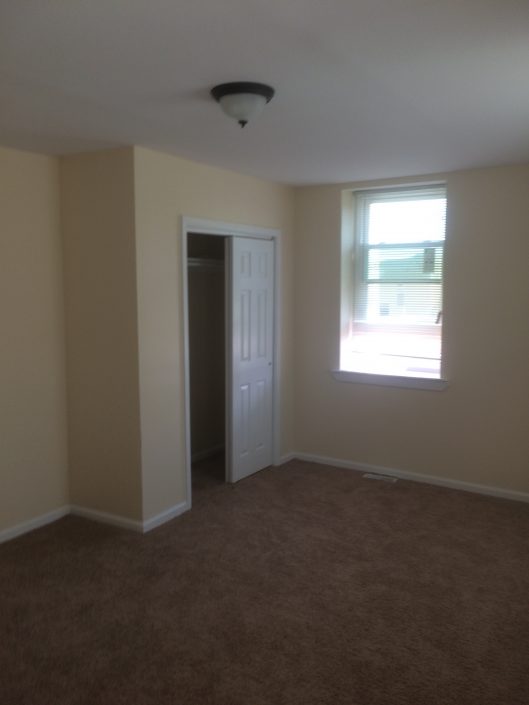 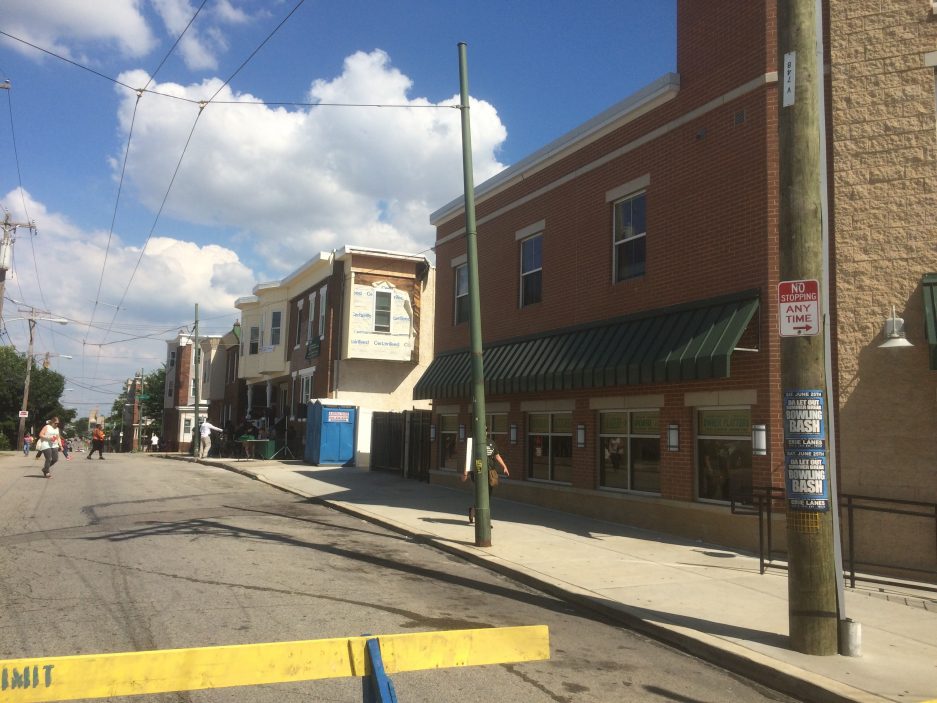 The homes are part of a larger project encompassing the entire block that includes a new mixed-use building at the corner of Wingohocking Street and Germantown Avenue.