Habitat: From Edward Gorey to Q*Bert, a Victorian in Fairmount Gets Modernized

A family takes the Centennial-era rowhome into the 21st century. There’s always company at the dinner table, as this scene pops from the pages of Edward Gorey’s “The Doubtful Guest” and onto the walls of the dining room. Photos by Sam Oberter

The neighborhood of Fairmount pretty much has it all: easy access to Center City, even easier access to its big, leafy eponymous park, and countless homes with a rich historical connection to Philadelphia. It’s that vintage vibe that three years ago brought Eban and Mica from South Philadelphia to a three-story Victorian rowhome near the park. Eban says the string of homes on their block was first built in the late 1800s, around the time of the massive 1876 Centennial Exhibition in Fairmount Park.

Before moving in, the family enlisted the services of husband-and-wife team Kenny Grono and Bronwyn Reice of Buckminster Green in Northern Liberties: They would undertake a year-long revival of the home—one that sought to hark back to its late-19th-century roots while handling the needs of a 21st-century family.

The kitchen is a prime example of contemporary design enhanced by nods to period-specific materials: Grono and Reice widened the floor plan to offer more living space and added multiple windows (or reintroduced them) to make the space brighter. Finally, soft radiant heat adds comfort to the painted cement-tile floors, and the area that is now the mudroom and “hidden” refrigerated cabinet space has replaced an old outhouse that was walled off over time. “The modern thing is to kind of hang out in the kitchen,” says Eban. “It’s become a family gathering place.” 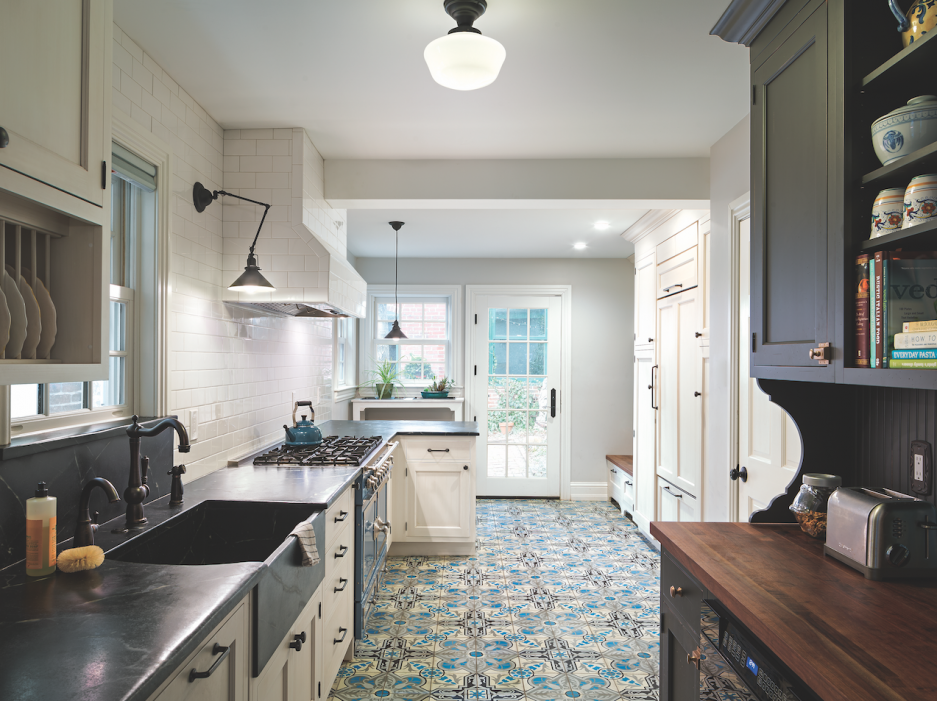 The soapstone counters (from Bucks County Soapstone), main hutch and cement tiles aim to reconnect to the era when the home was built. Hutch and cabinets: Woodmode, via Teknika Design Group in Old City. 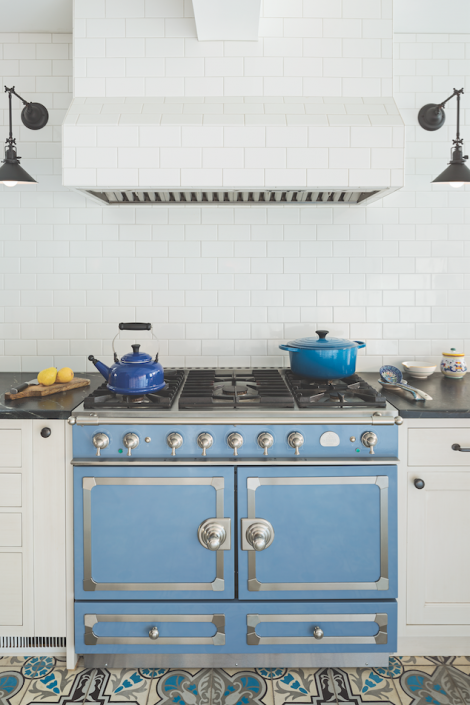 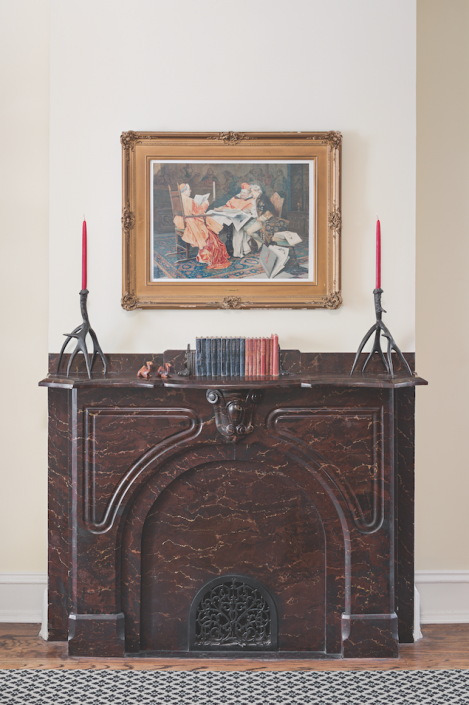 The original painted soapstone fireplace sets the tone in the living room. Its mantel is topped with a collection of vintage books by Edgar Allan Poe that has been passed down through the family over three generations. 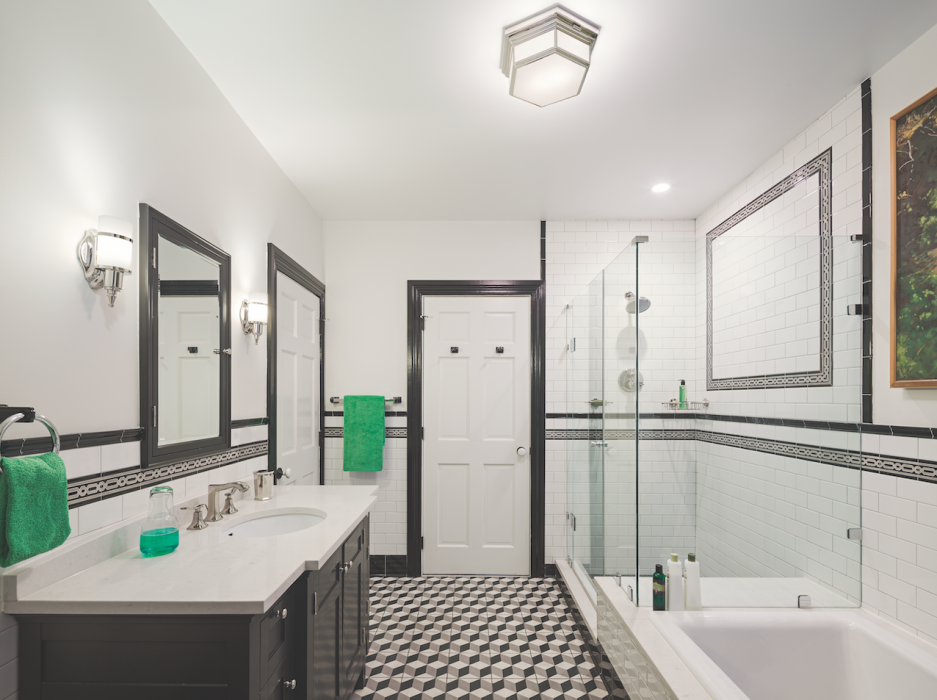 The new master bath, formerly a large walk-in closet, is highlighted by more painted-cement tiles, which Grono jokingly refers to as having a Q*bert-like pattern. 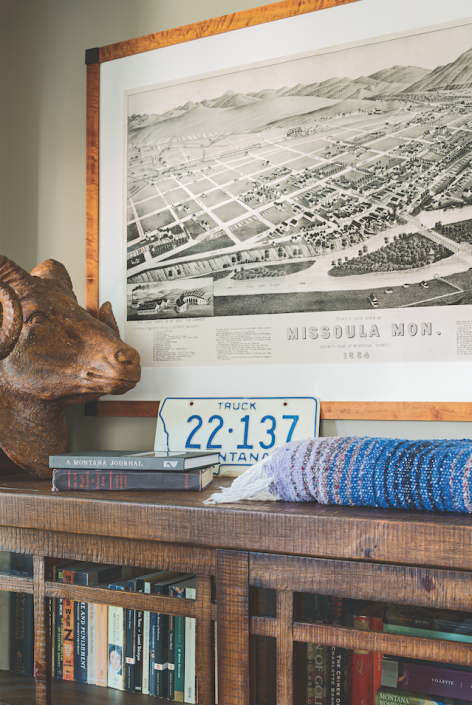 Eban refers to the office as their “Montana Room”—Mica hails from Missoula, and the space is decorated with rustic memorabilia from Big Sky Country. 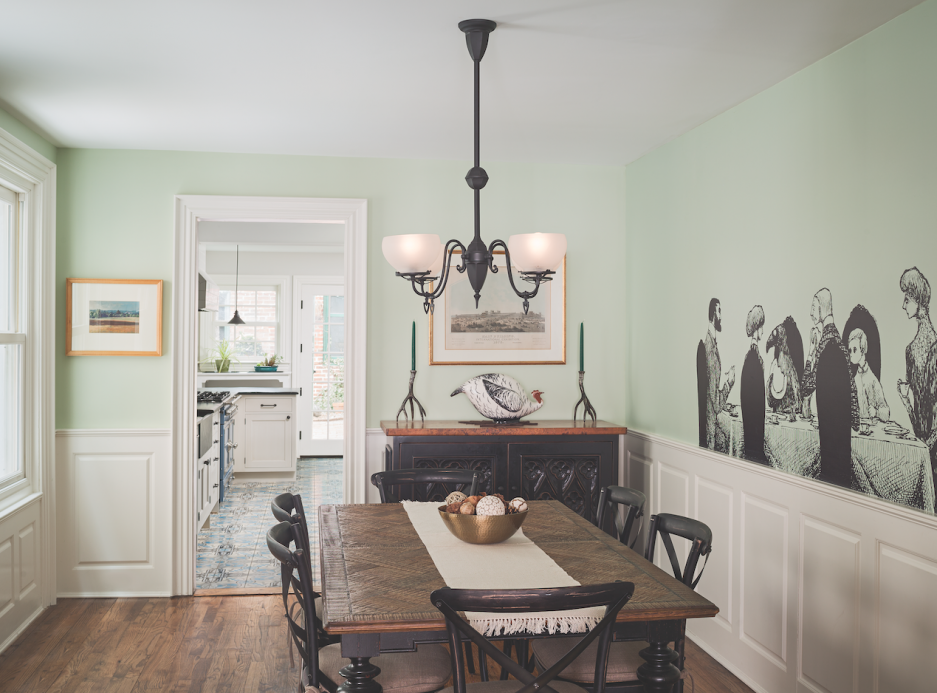 A life-size illustration from Edward Gorey’s The Doubtful Guest stands out in the redesigned dining room. “It all plays into the Victorian aesthetic,” says Eban.