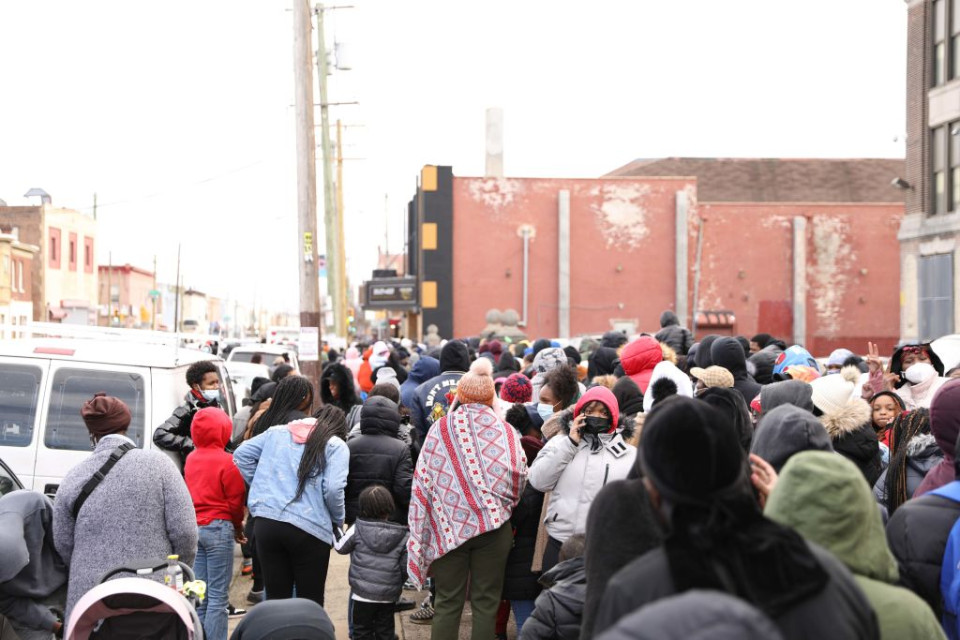 This past Thanksgiving, while many of us were getting our family feasts together, Black social media sensation Wallo took to Instagram offering to take “15 ladies” on a shopping spree at a Target in Philly. Wallace Peeples, known as Wallo, is a Philly influencer who’s risen to fame on social media after overcoming personal obstacles (such as being incarcerated for 20 years) to now make viral hip-hop content. What initially seemed like a not-so-random act of kindness turned into something cringey. Chaos ensued, since Target was closed for the holiday (a simple Google search could have easily prevented this), and the stunt left dozens of Black women suffering in the cold as cell-phone cameras captured it all.

Rather than simply abandon the stunt, Wallo returned to the same Target the next day, Black Friday, and brought even more shenanigans. This time, with a group of his friends, the viral star made it a point to have himself filmed while handing out big bills and bagging people’s groceries. It doesn’t get any more cringey than this.

Unfortunately, this type of buffoonery isn’t unusual. It’s become predictable during this time of year. And the script is always the same: Popular people pimp out desperate people for clout.

They cue the camera to ensure the stunt goes viral.

They position themselves as saviors to score extra points.

This ongoing trend of people flexing what’s often referred to as “good in the ‘hood” has become more ego-driven than charitable. The spectacle is always centered on the person whose “good” act actually takes advantage of distraught people at a difficult time in their lives. In a world where we’re now taught “pics or it didn’t happen,” these vanity projects of influencers and celebrities have only become more exploitative.

Some people will argue that such outlandish giveaways are still useful to those in need, but the negative of perpetuating racial tropes far outweighs the positive in temporary “service.” The issue isn’t why people are giving back; it’s about how they’re choosing to do it. You can feed those in need without humiliating them by filming their socioeconomic hardship. You can donate without broadcasting the amount online (or that you even did it at all). Yes, promoting charity can inspire others to be generous — but it’s one thing to promote and another to exploit. The viral poverty porn we’re seeing on our timelines feels more exploitative than the already-cringey times when elected officials publicize their turkey giveaways in the news.

It’s time for influencers like Wallo and others to put the phones down and crank up the humility. If you truly care about underserved communities, don’t capitalize on their struggle for the sake of a bit of clout. Black people, regardless of their socioeconomic status, deserve dignity. And dignity, in this case, would mean the public and media not promoting these poverty-porn thirst-traps. Speak more on the issues shaping these situations than the stunts. If your “feel-good” holiday video involves poor people being saved by some flashy influencer — think again. Charity and benevolence shouldn’t be about getting noticed, but about the service itself, especially during these uncertain times.