The Most Ridiculous Phillies Prop Bets on the World Series 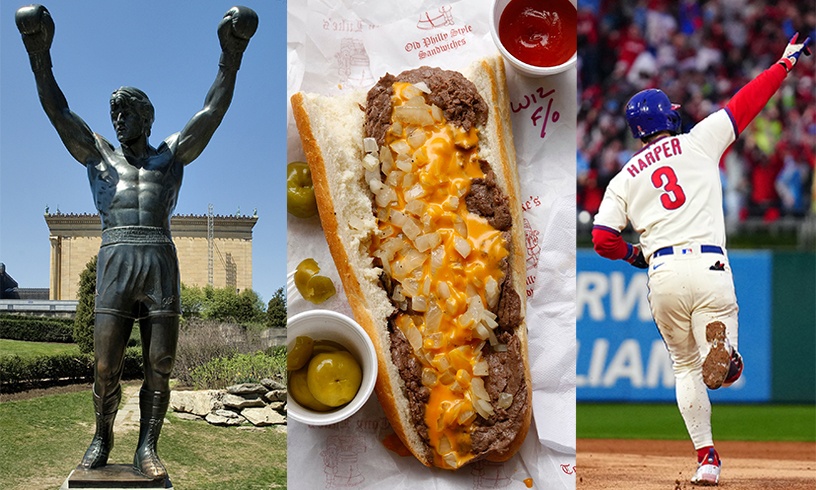 Phillies World Series betting includes everything from cheesesteaks to the Rocky statue. / From left, photographs by J. Smith for GPTMC, Jason Varney for Visit Philadelphia, and Daniel Shirey/MLB Photos via Getty Images

Last month, Michael Bradley reported on the rise of sports betting in Philly, which is increasingly becoming an entry point for younger fans. The “game-ification” of sports, Bradley explained, comes not only from easy-to-use apps like DraftKings, but from the constant opportunities for live in-game betting. You can put money down not simply on who will win or lose a particular game but also on highly specific outcomes like NRFI (No Runs First Inning) — whether a run will be scored in the first inning — or multi-leg parlays that combine bets, so you have to be correct on multiple predictions to get a big payout.

So it’s no surprise that World Series betting props include some random — and ridiculous — action. In addition to expected bets like series MVP, Series winner and the like, BetOnline reports a few we just had to share with you.

The most Philly-centric ones come in Game 3, when the Phillies return home to Citizens Bank Park.

Next up, what will be shown first in the broadcast: the Liberty Bell or the Rocky statue? Always the underdog, Rocky is trading at +150 (40 percent probability), while the Liberty Bell sits at -200 (67 percent).

And of course, no national sports broadcast involving a Philadelphia team is complete without B-roll of a cheesesteak being made. But how long can Fox resist? Can they wait until the fifth inning to fog up our screens with the steam from sizzling onions and beef? Bettors think they just might, with “in or before fourth inning” trading at +110 (48 percent), and “at start of fifth inning or later” coming in at -150 (60 percent).

For those curious about more consequential matters, as I reported yesterday, the Astros are favored by gamblers with the line set at -190 (66 percent) for Houston and +165 for Philadelphia. According to Adam Burns, sportsbook manager at BetOnline, what’s unique about this World Series betting is that the line hasn’t moved since the matchup was set on Sunday: “Typically, early action comes in on one side or the other, causing the book to have to adjust the line. For this World Series, no adjustments have been made or necessary as even money has been coming in consistently on both sides. Fifty-three percent of the total wagers in on the Phillies, while 51 percent of the total money is on the Astros.”

One last prop bet worth mentioning: Despite the Astros being favored to win the World Series, the most likely World Series MVP is Bryce Harper. An explanation is that an Astros win could be paired with any number of stars in their deep roster, but if the Phillies win, it’s most likely thanks to their clear superstar.