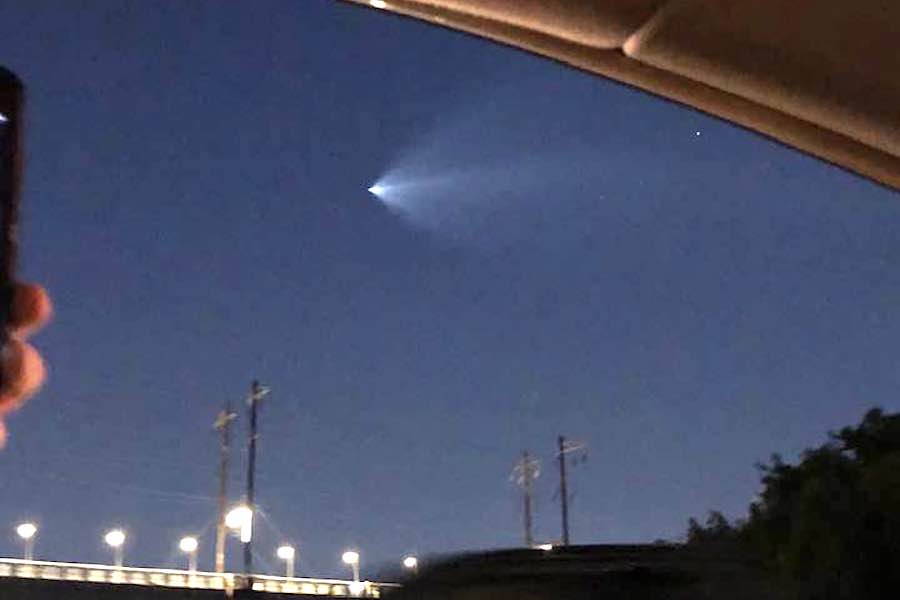 Is it SpaceX? A UFO? Something else? (Photo by Carissa Hudson, used with permission)

It’s been a while since we had a good strange-things-in-the-sky controversy here in Philadelphia. If memory serves me correctly, it was actually nearly a decade ago. That’s when photos like this one spawned a bounty of conversation: 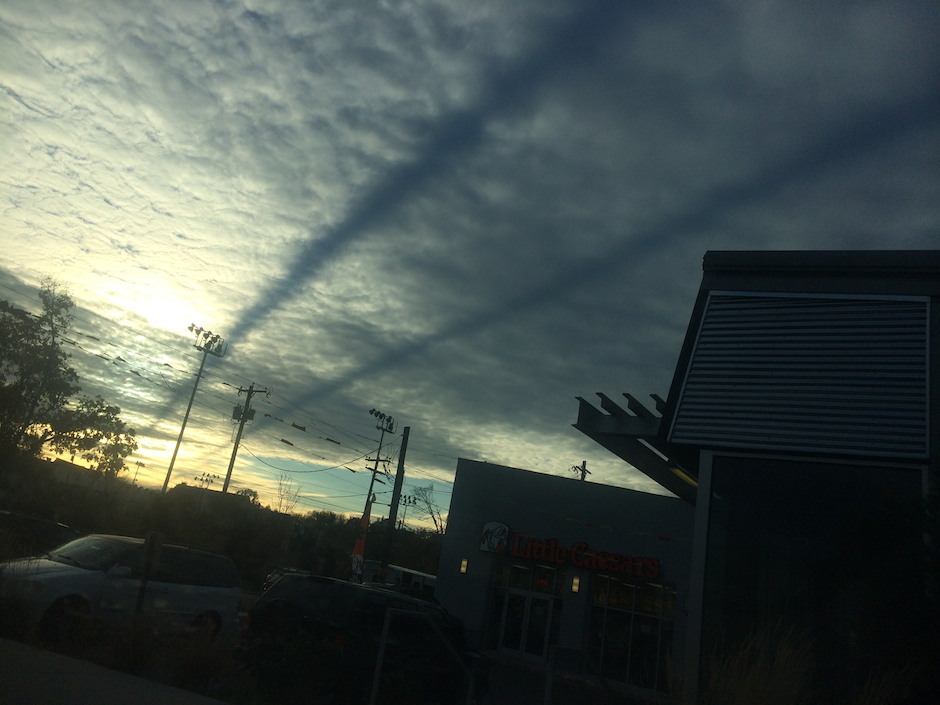 And it wasn’t too long before we had conspiracy theorists coming up with all kinds of angles involving chemtrails, HAARP and the like. Cecily Tynan even weighed in.

But this time around, it’s not strange streaks in the sky but strange lights.

From Manayunk to the Jersey Shore, people were posting photos and videos of lights they saw in the sky on Saturday night around 7:40 p.m. Some described the lights as a UFO. I guess that was technically true, since the lights weren’t identified at the time.

“At first, I thought it was a search-and-rescue type plane, because I thought the spotlights were coming down off it, but now, as it gets closer, that’s not spotlights,” said one South Jersey man as he narrated a video from Wildwood. “There’s an array of lights coming out behind it. I just can’t figure it out … It’s not a meteor … I feel like I’m filming Bigfoot … It’s moving too slow to be anything but an airplane, I think. All those lights … It just disappeared! Oh my God. It just disappeared.”

Philadelphia’s Mike Thatcher and his girlfriend Carissa Hudson spotted the lights at 7:39 p.m. as the two were driving over the Green Lane Bridge in Manayunk. Thatcher captured this video:

Many social media users were quick to suggest that these were sightings of the SpaceX Starlink satellite launch from Florida. That certainly made sense considering the timing. SpaceX launched the Starlink satellites — 52 of them in one launch! — from Cape Canaveral at 7:32 p.m.

But if it was the SpaceX launch, why would the lights be seen so far north? That’s what some observers pondered, Thatcher included.

“Did they shoot it up the East Coast first before it went into orbit?” he wondered when we asked him about the sighting.

Fortunately, Philadelphia has Derrick Pitts to sort all this out. Pitts is the chief astronomer and director of the Fels Planetarium at the Franklin Institute. He says the mysterious lights were, indeed, the SpaceX launch.

“If this were ‘Space Coast’ Florida instead of Philadelphia, none of us would have paid a moment of attention to the lights,” Pitts says. “This happens all the time down there. In terms of why we’d see this here, the vast majority of people, 99.999998 percent of people have never studied launch trajectories or orbital mechanics. The purpose and use of a satellite will determine your launch angle. You want the satellite in a specific orbit.”

Thus, Pitts explains, the northern trajectory of the SpaceX Starlink launch simply indicates that this particular launch was headed for a north-south (or close to it) orbit.

“People in Philadelphia forget that when the Space Shuttle took all those voyages to the International Space Station, it launched at a 51-degree angle, which brought it right up the East Coast all the time,” Pitts adds. “In the case of Saturday night, it happened to be a very dark and very clear night and a very bright rocket. Perfect timing and perfect conditions to see the SpaceX launch.”

Pitts recommends downloading one of the various space launch and satellite-tracking apps for those who are curious about the night sky. Or not.

“Some people would be really freaked out if they could see the absolute web of satellites and all the different orbital orientations,” he says. “If you get away from the bright lights of Center City and out into the Pine Barrens or a place like that near Philadelphia and you sit very patiently under clear, dark skies, you can see 20, 30 or even 40 satellites overhead with the naked eye.”

The Washington Post Does the Fetterman-Oz Meme War Justice

One of the most remarkable things about the John Fetterman-Dr. Oz battle has been all the trolling going on between the two campaigns, and all the memes that have come out of said trolling. If you’ve been enjoying all that, you most definitely need to check out the Washington Post‘s amazing “The Fetterman-Oz Meme Campaign, Illustrated”.

We don’t use the word melee indiscriminately. But it seems apt in this case.

The Art of the Deal (or Lack of One)

Major, major drama at the Philadelphia Museum of Art now that contract negotiations have failed.

I Think They Call That a Failing Grade

About half of Philly’s homicide cases go unsolved.

And from the Sweet, Sweet Revenge Sports Desk …

Weekend sports roundup! We’ll proceed in chronological order, though we all know what matters most. On Friday night, Aaron Nola pitches for the Phils against the Braves, the second in a four-game series at Citizens Bank Park. It’s a Pheast night, as the Phils can’t be stopped and are up 8-0 in the, uh, fourth inning! They rack up one more for a 9-1 final.

Saturday afternoon, Temple football decimates the UMass Minutemen, 28-0, for the team’s first shutout since 2016, during the Matt Rhule era. The Union play a friendly against Mexico on Saturday night, and I’m here to tell you, unless soccer scheduling becomes easier for your average sports fan to understand, the game’s never gonna catch on. But it’s a win, 1-0, on a goal by Nathan Harriel. The Saturday 4 p.m. game for the Phillies goes on for about six hours, especially since the Phils and Bailey Falter are down 6-0 in the fourth. I’m glad to be mowing the lawn. There’s a brief flurry in the seventh inning, but it amounts to naught, and we lose, 6-3.

On Sunday, the Phils start at 1:05 in their final matchup against Atlanta — until, perhaps, the playoffs. But the Eagles face the Commanders behind QB Carson Wentz at 1 p.m., so which are you gonna watch? The Birds are in fine form, parking Carson on his butt a team-record-setting nine times and racking up 24 points in the second quarter behind Jalen Hurts. In the fourth quarter, Washington finally scores. On a safety. Woo-hoo, Wentz! The pièce de résistance is an interception by Marcus Epps of a two-point conversion attempt by Wentz after the Commanders finally do score a touchdown, with under two minutes left. Final: 24-8.

Oh, look! The Phils are still playing, time-warped by a rain delay in the bottom of the fifth inning with them up 6-5. The Brewers, meanwhile, lose, putting the magic number for the Phils at eight. After two hours, the game gets going again, and the Braves promptly tie it up, 6-6. That’s how it stays through the end of the ninth and then the end of the 10th. In their half of the 11th — man, this has been going on for more than six hours again — the Braves score two runs. But! In their half, the Phils score … one run. Braves win, 8-7. Everybody seems glad it’s over. Weekend summation: Could be worse.