City Hacks: Everything You Need to Know About Those Evil Philly Potholes

How do I get them fixed? Will the city pay for the damage caused to my car by a pothole? Why the heck can't we prevent potholes in the first place? These answers, and more. 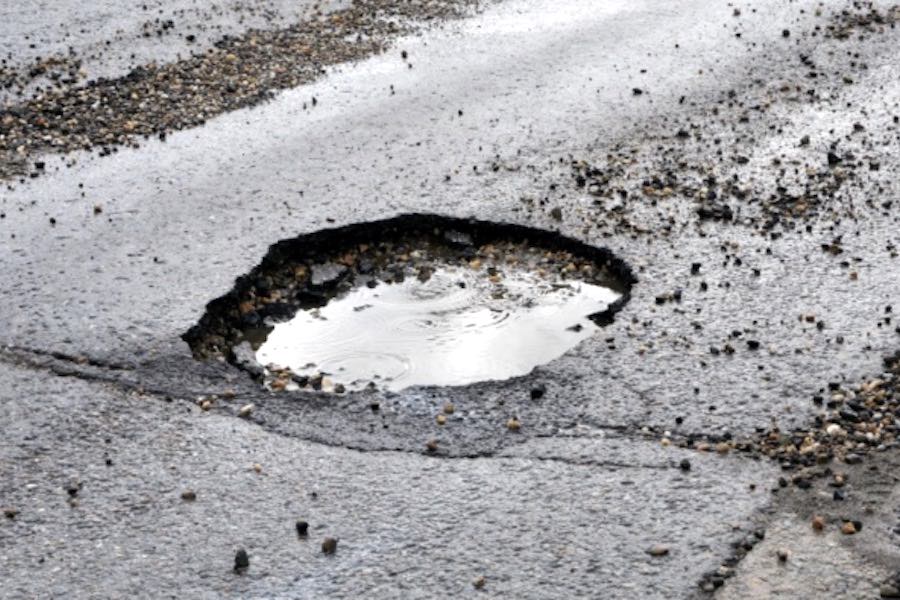 No, “City Hacks” is not a reference to the elected officials and bureaucrats running (or trying to run) our city. It’s a new Philly Mag series that will help you navigate life here. For our first edition, we decided to tackle the subject of the scourge known as potholes.

If you’ve driven a car or pedaled a bike anywhere in Philadelphia in the past few weeks, you know we’re in the middle of an absolute pothole nightmare.

Sure, we see tens of thousands of them every year. But when you combine the snow, sleet and freezing rain we get every year with a slashed city budget and a Streets Department that has faced huge staffing issues since the onset of the pandemic, well, this could be a very bad year for Philly potholes.

So what causes potholes? How does a resident get one on their street fixed? And what happens when one of the little bastards causes hundreds of dollars in damage to a car? Will the city pay up? We dove deep into the problem to get answers to all of these burning questions.

There’s a big pothole on my block. How do I get it fixed?

As with so many quality-of-life issues in Philadelphia, the answer starts with the city’s 311 office.

You can always dial 311 on your phone to report a pothole. But wait times can be long. And sometimes the call won’t even go through. (Basically, we need a 311 for reporting problems with 311’s phone line, but I digress.) It’s much, much easier to submit a 311 service request online. Takes but a few minutes.

You provide the location and answer some basic questions, along the lines of: Is the pothole on a bus route? Is it in a bike lane? You can also provide a description, in case you want to wax poetic or profane. And there’s an option to upload a photo.

Note that if gas or water is rushing out of the pothole, 311 will advise you to call 911 or the Water Department emergency line, respectively, though you probably would figure that out on your own.

How long do I wait before getting annoyed that it’s still there?

Okay, but I’ve been waiting for weeks. What gives?

Chances are what you’re seeing isn’t a pothole, which the city’s definition limits to a hole no deeper than 10 inches. (Just be careful if you decide to walk out into the middle of your street with a ruler!) According to the Streets Department, many of the problems reported as potholes are actually deeper, more complicated street defects that have other underlying causes. Those might include recent work your neighbor had done involving the water line or sewer line. The hole might be a much more serious cave-in or sinkhole, as opposed to a pothole. 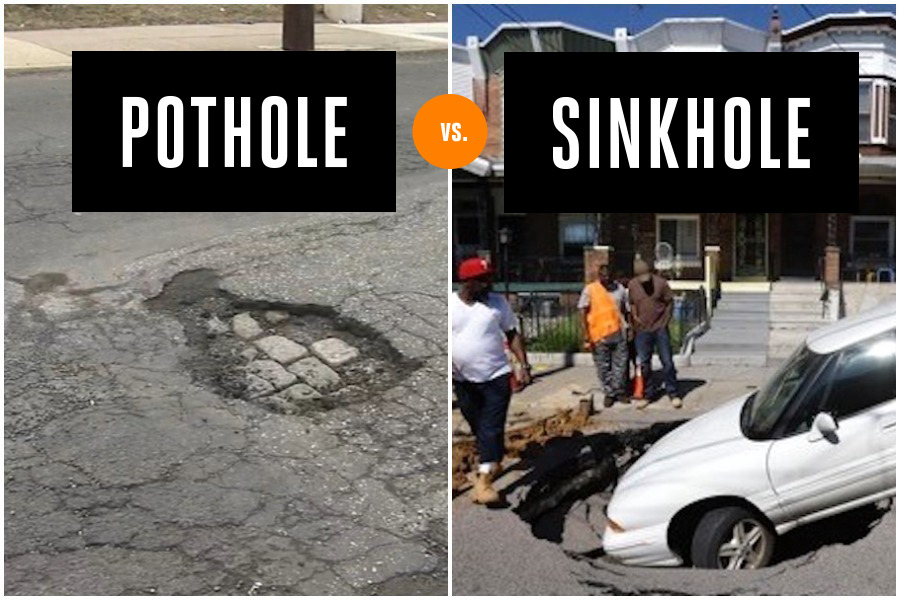 “The city is an old city,” Montanez observes. “There could be multiple things involved. [The ground] under the asphalt you see on the street may have collapsed, creating a void underneath.”

Potholes are pretty simple and quick to fix. These other issues, not so much.

So what exactly causes these things?

Philadelphia Streets commissioner Carlton Williams explains: “We live in a region that gets pretty cold, so the ice begins to melt, but then it freezes back up. It gets in small crevices and cracks in the roadway and expands and creates a small hole, wearing away at the asphalt. It goes from a small hole to a larger hole to a pothole.”

In a region where temperatures don’t fluctuate so much, you don’t see as many potholes. But a city like ours—where temps go from the 50s to below freezing and back in a few days—gets potholes.

Is the Streets Department responsible for fixing all the potholes in Philadelphia?

No. Many roadways in Philadelphia are actually considered state routes and thus are under the control of PennDOT. Some examples of state routes include those you might expect, like I-676, I-76 and I-95, but there are also many others, including Baltimore Avenue, Lehigh Avenue, and parts of Passyunk Avenue. This map shows all the state routes.

The good news is that if you report a pothole to 311 that’s actually the responsibility of the state, the Streets Department will send the request to PennDOT instead of rejecting your claim and kicking it back to you.

That said, if you know in advance that the pothole is on a state route, you may get it fixed sooner by reporting it to PennDOT directly, by using this form or calling the easy-to-remember 1-800-FIX-ROAD.

Just how many potholes do we normally see in Philly?

Below, a look at the past several years of potholes filled by the city. Note that the year refers to the calendar year, so the pothole impact of this winter won’t be reflected until the end of 2022 But the Streets Department says it keeps getting pothole reports into November, just in time for winter and the whole pothole cycle to begin again.

And that’s just the potholes not on state routes, like City Avenue where I once counted 300 potholes between 76th Street and Belmont Avenue on one side of the road in one day. Alas, PennDOT doesn’t keep a tally of the number of potholes it fills in Philadelphia, so we’ll never have a true total.

How does the city fix a pothole?

One is the so-called pothole killer; the city owns two of these machines. They look like this: 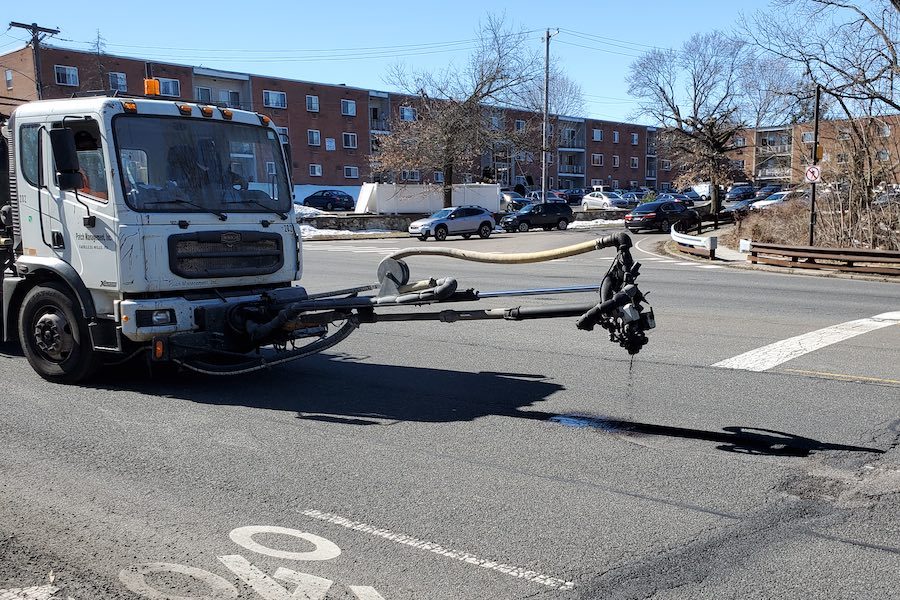 The pothole killer requires just one city worker to operate it. “It shoots tar, rocks and asphalt into the holes,” explains Montanez.

The other method for fixing potholes is a crew of three or four workers who jackhammer the area and then fill it with hot asphalt or what’s known as a “cold patch.” Hot asphalt is much better and longer-lasting but according to Montanez can be in short supply. A cold patch is similar to what you might have picked up at Home Depot to fix a hole in your driveway. Works just fine for your driveway — not so much for a busy road with cars and buses thundering down it all day.

When you average all this out, you get a taxpayer cost of approximately $22.50 per pothole, says the city. 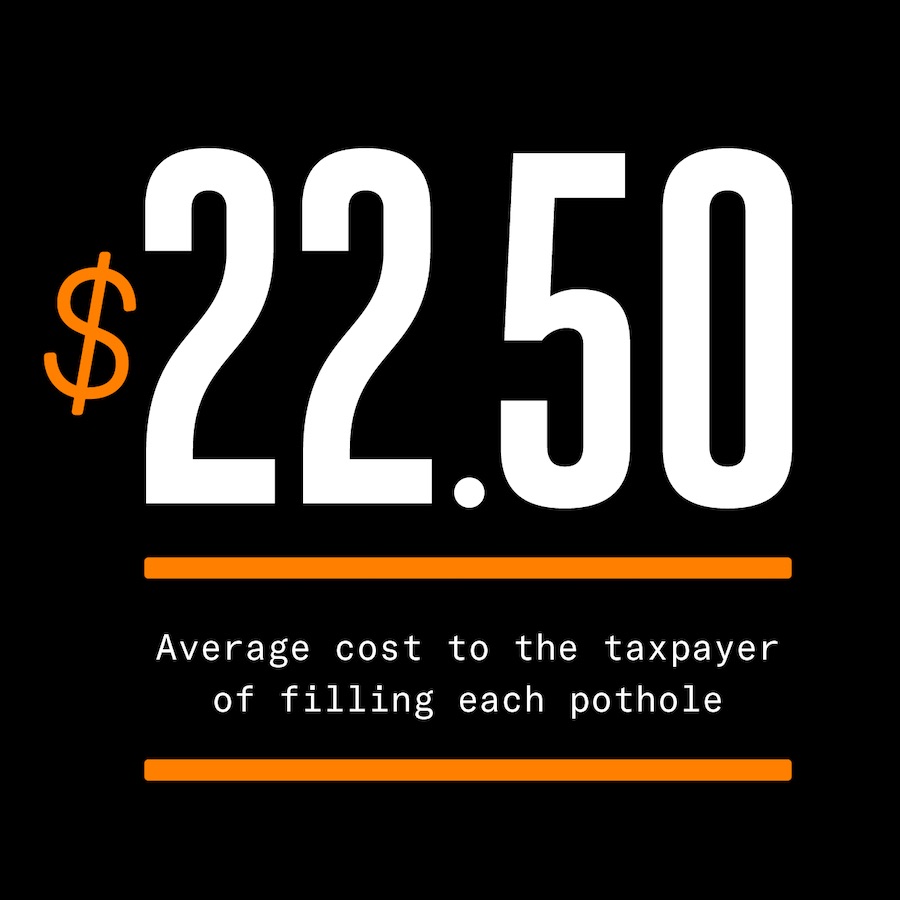 But this is all about fixing potholes. What about preventing them?

The city’s biggest weapon against potholes developing in the first place is repaving. “Freshly paved streets are more resistant to potholes because they’re more pliable than an older street,” Montanez says. “An older street is more brittle. The newer ones are more adaptable.”

The Streets Department tries to repave its bigger and busier roadways every seven to 12 years. For your tiny street in South Philly or Manayunk or wherever, it’s more like every 17 to 20 years.

That’s all well and good. But in 2021, I reported two potholes on a road that had been repaved in the previous year. The city fixed the potholes in about ten days. But guess what? Those potholes were back after just a few weeks.

Is there anything I can do to avoid jacking my car up while driving over potholes?

Here’s one idea: Slow down.

It doesn’t take a city engineer to figure out that you sustain more damage if you hit a pothole driving 20 mph over the speed limit. “I’ve even seen potholes cause broken windshields if you hit them just right and you’re going fast enough,” my mechanic at Rossi’s Tire & Service in Delco told me when I brought my car in after blowing out not one but two tires on potholes on the same day. (Full disclosure: One had a slow leak and should have been replaced weeks before.) “Lots of broken rims. Really, they can cause all kinds of problems, especially with the way people drive these days.”

You might also try using the Waze app, which crowdsources road annoyances and announces things like “Police ahead” or “Pothole ahead.” Because it’s crowdsourced, Waze is imperfect. But I use it all the time, and the app has warned me about more than a few potholes this season. It’s particularly useful on poorly lit roads at night, where you might not spot a pothole until it’s too late.

How do I get the city to pay for my car damage caused by a pothole?

“The city’s risk management division does take claims for damages from people who have experienced problems with potholes,” says Williams. “You have to go through your insurance first. And then at that point, you report to risk management. They come out and settle the claim based on what the insurance company doesn’t cover. We are liable for potholes in the city if they damage your vehicle.”

The city usually receives about 150 to 175 pothole claims each year, with one fifth of those resulting in a payout. Last year actually saw a dip in claims — perhaps because commuting patterns changed due to the pandemic? — with 130 pothole claims filed with the city. The median settlement for pothole claims ranged from $450 to $500 as of this time last year. But since then, there was an uptick, and the average payout is closer to $575.

Below, you’ll find the form you have to fill out to start the claim process:

Pothole Claim Form in Philadelphia by philly victor on Scribd

You provide photos, an account of what happened, two repair estimates, yada yada yada. Note the repeated fraud warnings on the form.

Do you have a question about how to navigate life in Philadelphia? Email victor@phillymag.com.