Meanwhile, the Main Line Has Its Own Christopher Columbus Monument to Grapple With

“This doesn’t belong here,” says one resident. “This whole stupid holiday is based on mythology. He killed people. He wasn’t successful. So why do we have this here?" 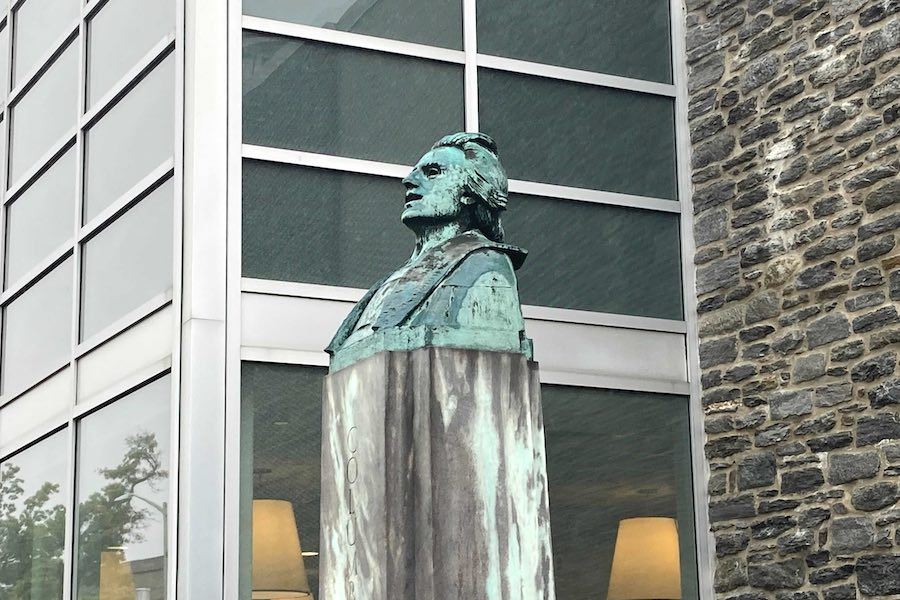 Monday in Philadelphia marked the first time the city officially recognized Indigenous Peoples’ Day exclusively, kicking Columbus Day to the curb for good. Fittingly, the Christopher Columbus statue in South Philadelphia continued to make national news. Meanwhile, in Lower Merion Township, a much quieter saga is unfolding thanks to a Christopher Columbus monument outside Ludington Library in Bryn Mawr.

Near the corner of Bryn Mawr Avenue and Lancaster Avenue, a bust of Christopher Columbus sits high up on a pedestal, with his back to the library and his face to, well, a rather ugly two-story tan bank building and parking lot.

The sculptor responsible for the monument was the Italian-born artist Giuseppe Donato, who came to the United States as a child and studied at the Pennsylvania Academy of the Fine Arts from 1897 to 1903. He also studied under the great French sculptor Auguste Rodin. Notably, Donato was also known for a bust he created of the father of fascism, Benito Mussolini.

According to the plaques on the pedestal, the Christopher Columbus monument in Bryn Mawr was dedicated on Columbus Day in 1952. On that same day in 1992, the Main Line Columbus Memorial Committee rededicated the monument in honor of the quincentennial of whatever may or may not have happened in 1492 after Columbus sailed the ocean blue. At some point, the monument was removed for restoration and then reinstalled in September of 2012. And there it sits today. 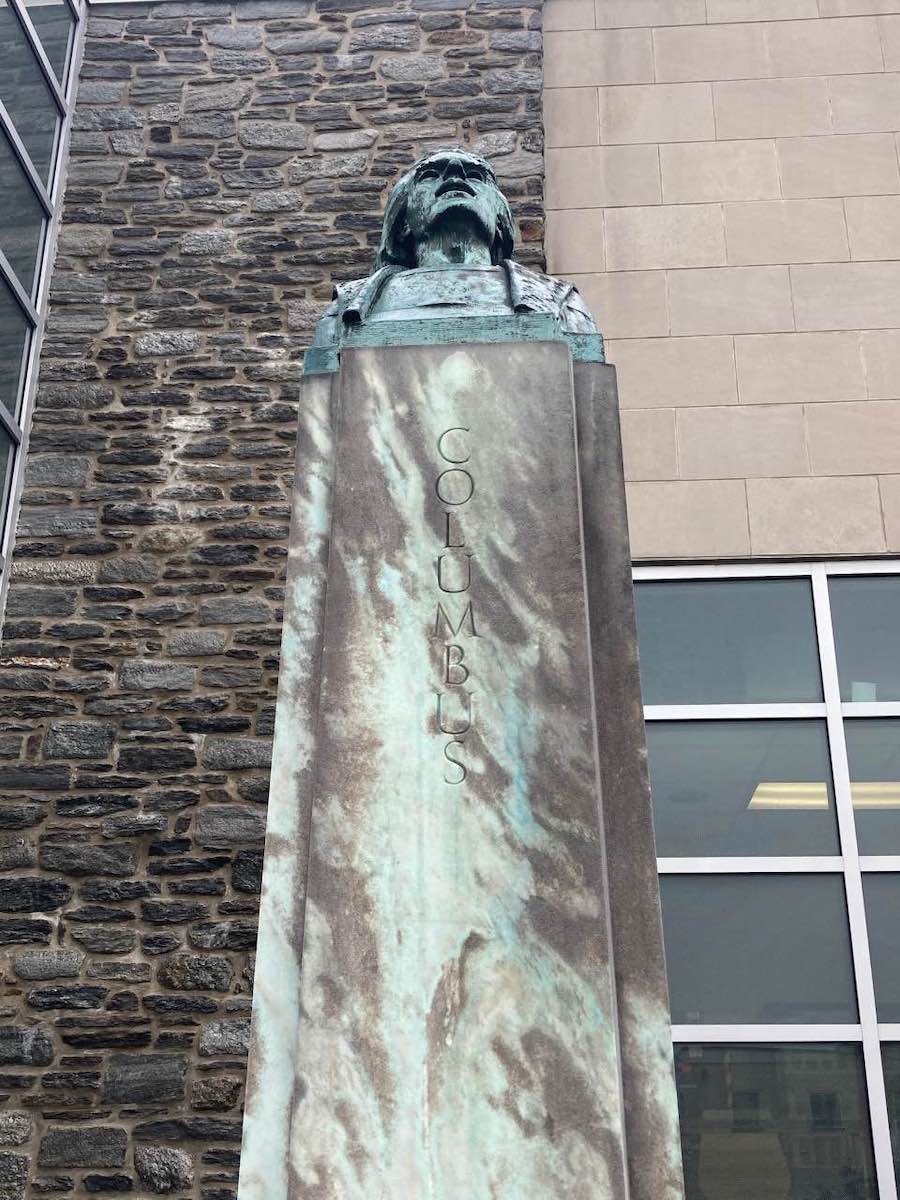 “We definitely have gotten letters about it,” a Ludington Library staff member told me on Tuesday morning. “But it has absolutely nothing to do with the library. It’s a township problem.”

That’s not actually true, according to Lower Merion Township spokesperson Lori Jennings and Daniel Bernheim, president of the board of commissioners of Lower Merion Township. According to them, the statue is, in fact, owned by the board of Ludington Library, a detail later confirmed by David Belanger, the president of said board. Belanger went on to explain that the monument’s future is actually on the agenda for a board meeting next week.

“This doesn’t belong here,” township resident Jamie Singer says of the monument. “This whole stupid holiday is based on mythology. He killed people. He wasn’t successful. So why do we have this here? Lower Merion is supposed to be more progressive than that.”

Singer’s issues with the monument aren’t just on moral or ethical grounds. There’s also the matter of aesthetics. “It’s hideous,” she observes of the bust. “We need to try to topple it.”

Another township resident we spoke to agreed that the Christopher Columbus sculpture in Bryn Mawr has no place in the township, let alone outside a public library, while one resident said she didn’t feel strongly either way but wasn’t opposed to removing the monument if people found it offensive.

The way Bernheim sees it, few residents were probably even aware of its existence until very recently.

“I would suspect that 90 percent of the people who walk or drive by it don’t know who it is up there,” Bernheim says. “It’s 2021, and people will often say if it could be offensive, let’s not be offensive; let’s just move it into history as opposed to it being in the forefront. And that could be what happens here.”

As for Columbus Day itself, the holiday is still federally observed. But while Philadelphia has eliminated Columbus Day in favor of Indigenous Peoples’ Day, Lower Merion Township recognizes neither. Schools are open. Trash is picked up on schedule. The libraries are open.

“I asked around,” says Jennings. “And I couldn’t find anybody who could remember the last time we observed Columbus Day in Lower Merion Township.”

Jennings and Bernheim both say there haven’t been any discussions about the township recognizing Indigenous Peoples’ Day and that township holidays are determined as part of the collective bargaining process with the local police and municipal workers unions.

“But Lower Merion is, on its own, pretty inclusive,” Bernheim opines. “We recognize diversity not because we have to, but because it’s correct. We’re all about substance over form.”