Keesha Boyd, Comcast’s head of multicultural video and entertainment engagement strategy, grew up in the 1980s, seeking out television characters who looked like her. Now, she’s making sure the current generation doesn’t have to go searching. 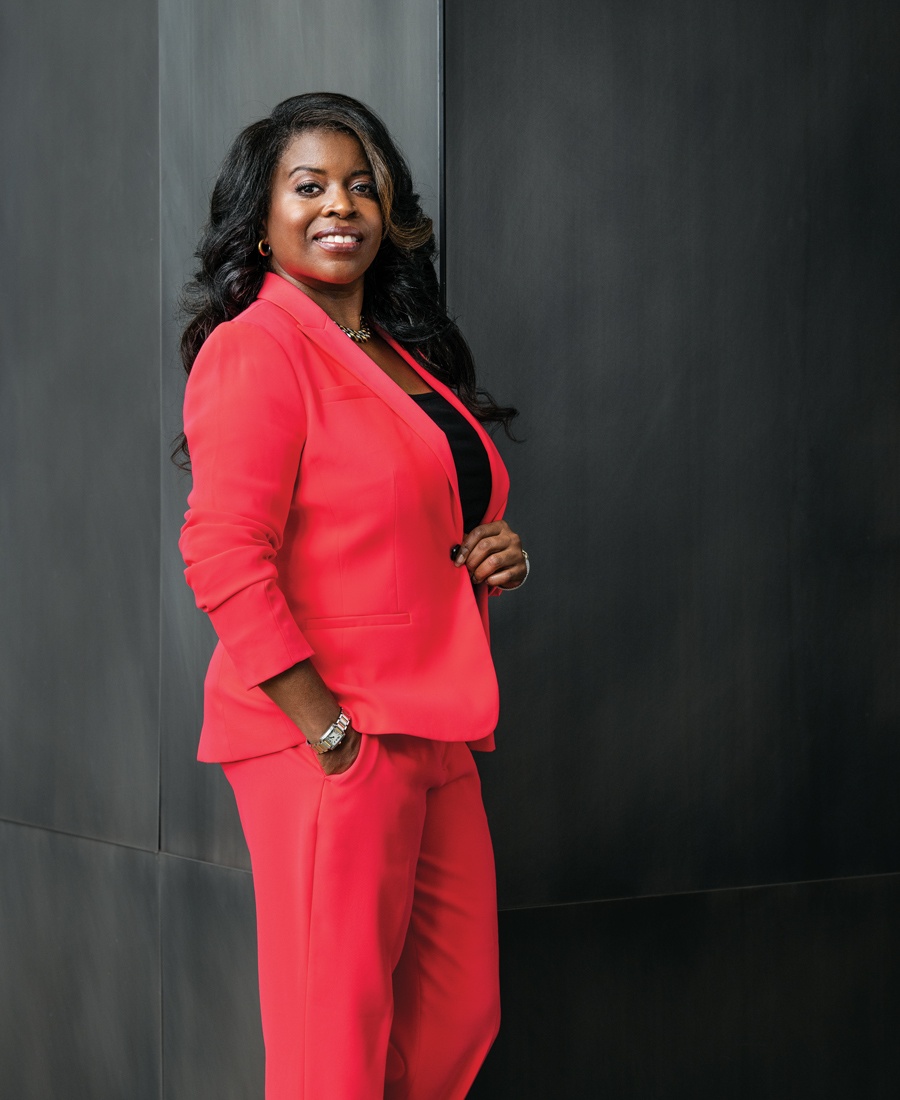 As studios and streaming services grapple with creating authentic diversity, representation and inclusion in television, Keesha Boyd is leading the way at one of the world’s largest entertainment companies. The New York native talks building a launch pad for Black creators and why what we watch matters.

Hi, Keesha. I’m doing this interview from a chair in my basement. Are you in one of the big Comcast towers for this?
No, I’m not back in the office yet. I’m home in Northern Liberties. I have a condo with a great view of the Comcast building and the Ben Franklin Bridge. I’ve actually spent a lot of time back and forth between my place here in Philadelphia and visiting my family in Marietta, Georgia. It’s been great to be close to them and have them be my background co-workers. [laughs] I’ll be on a call, and then my mom is bringing up lunch just in time.

Marietta — is that where you’re from?
I’m originally from New York. We’re native New Yorkers — Long Island. But my dad was in the military, and his last station was in Georgia. And we all fell in love with it. I was in Georgia through college. I went to Emory University. But then I returned to New York for grad school at Columbia.

What did you study there?
I got two master’s degrees — one in counseling psychology, with a focus on race, culture and identity, and the other in organizational psychology.

I think I understand what organizational psychology is. But just in case, can you please explain?
It’s the study of people and dynamics at work for the purpose of driving business strategy, whether that’s process improvement or mergers and acquisitions or restructures and reorganizations. Marrying psychology with business. It can really be applied across any industry.

Was it Comcast that brought you to Philly?
Yes. I got here in 2007. I had been out at Comcast in Chicago and then was tapped by the headquarters in Philly to come and stand up an organizational development practice, helping to roll out systems and processes. I did that for quite some time. But my passion points were entertainment and understanding the media consumption of Black women. And I wondered: Is there a world where I can leverage my knowledge and interests? And I made the transition into this role about seven years ago.

What exactly is it that you do now for Comcast?
Essentially, what I do and what I lead my team to do is determine an overall content programming strategy that weaves into our Black, Latinx and Asian American audiences, and then care for that content.

My wife is originally from India, and she’s told me that when she was growing up here in the United States, she was never able to find a character who looked like her on TV. What was your experience like with TV?
I can really relate to your wife. I remember watching even cartoons that might have a Black character in them and I would perk up. One of the first times was with Schoolhouse Rock. There was a Black action hero named Verb, and we got so excited about that. And from there, I wanted to find characters who looked like me. I remember Cherie on Punky Brewster and Tootie in The Facts of Life, and aspirational portrayals of young people, like in A Different World. That show was critical and impactful for me. You want to know your story is valid and that it’s being told by people that look like you. Seeing it on TV validates your existence and motivates and inspires you. Programming is not just “programming.” It can really move people to take different paths in life, to get excited and feel better about themselves.

I imagine that growing up, a lot of the Black characters you saw on TV and in movies were based on racial stereotypes. For my wife, the Indian characters she did encounter tended to be gas-station operators or 7-Eleven owners.
My parents were very involved in making sure my brother and I were consuming media that sort of supported how they wanted us to see ourselves. My parents were always reading to us about civil rights and showing us MLK documentaries on PBS. Whenever there were shows or movies with stereotypical portrayals, my parents were quick to get on top of it. They didn’t give it a chance to fester or make me question who I am.

After the civil unrest in 2020, it seemed like all the content providers suddenly “discovered” Black programming. I guarantee you that the Black Stories section on my Net­flix wasn’t front and center before that, if it even existed.
Actually, in 2016, we launched Black Film and TV, a curatorial destination that made it easier for our customers to find content that speaks to their culture and identity. We understood the importance of multicultural content early on, and we were the first in that space to lean in and figure out how can we better understand the consumption and content needs of our customers.

How do you come to grasp what those needs are?
We just need to stay connected to our community. There are all these fantastic social tools that tell us what the community is talking about. They can tell us what people are excited about. We keep our ear to the streets. And we’re all consumers. So our employees are some of our best sources. We tap into our Black employee network, our Latinx employee network. We get to hear what people are watching and what people want to be watching.

“The common thread is that you want to see yourself represented, but there’s also uniqueness with each community. We don’t want a rinse-and-repeat. We want to serve the audience in the way they want to be served.”

Black Film and TV was an on-demand menu on the Comcast box where people could find Black programming. What more have you done?
We stood up two networks, Afro and Cleo. Afro is a network that is specifically for serving the African content called Nollywood, from Nigeria.

Basically Bollywood, but from Nigeria. I love it.
It’s an incredibly thriving moviemaking culture.

Both of them predated 2020. What’s been happening since?
Black Experience, a free network we launched earlier this year. We wanted to delve even further into this creative community. After the murder of George Floyd, Comcast leaned even further into what the Black experience is all about. We’re an entertainment company that reaches 18 million homes. How can we use that power responsibly? So we created Black Experience, which we’re using to find the next generation of Black content creators. It’s a launch pad to find the next Jordan Peele and Issa Rae before they become the next Jordan Peele and Issa Rae.

You clearly have a lot of content intended for Black customers and documenting the Black experience. What about the Latinx experience or the AAPI experience? What’s the future there?
We have a version of this for Latinx audiences called Xfinity Latino Presenta, and there’s more to come there. And there’s also more to come in our Asian American Film and TV destination. With the surge in violence against Asian Americans, we were quickly able to pull together a destination for the Asian American community. We need to make sure we include them in the conversation. We need to be very thoughtful as we lean into these audiences. The common thread is that you want to see yourself represented, but there’s also uniqueness with each community. We don’t want a rinse-and-repeat. We want to serve the audience in the way they want to be served.

Finally, I know cinema isn’t the business you’re in, but I want to ask you anyway. I just went to see a movie in a real live movie theater for the first time in a long time. It felt … weird. I don’t feel the need to repeat it. Will there even be movie theaters in 10 years?
[Laughs] Ah, the million-dollar question! I wish I had that crystal ball. All I can say is that I love consuming content wherever it is — in theaters, on my devices, I don’t care. I take it wherever they serve it up, and I’ll continue to do so.

Published as “Behind the Curtain” in the October 2021 issue of Philadelphia magazine.