Fear, not misinformation, is why some people around me aren’t getting vaccinated, and no factual counter-argument is going to change that. So I’m going to stop fighting them on it, keep my distance, and leave it to the experts. 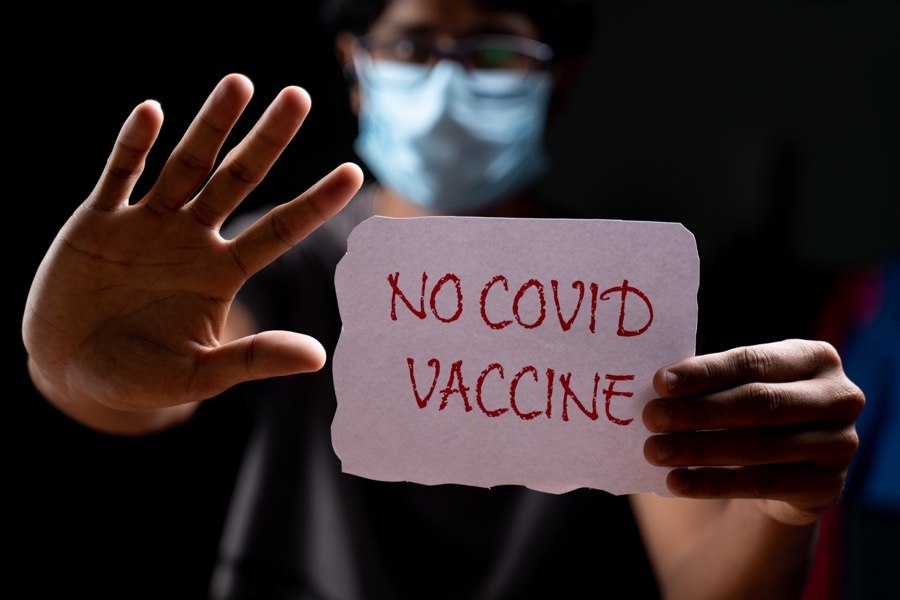 The author has come to the realization that debating some vaccine-resistant people is fruitless, so he’s going to stop. Photo via Getty Images

For many of the fully vaccinated among us who have spent much of the past year arguing with family, friends and colleagues who have refused to get a shot, Monday’s FDA approval of the Pfizer vaccine was expected to be a breakthrough moment.

Now, it seemed, critics of the COVID-19 vaccine — who had previously argued that they weren’t getting one because “it wasn’t officially cleared,” or who felt “there wasn’t enough research” — would have no excuse.

And sure enough, there has an uptick in people getting the vaccine now that the Delta variant is running rampant across the country. And we can expect to see even more now that the FDA approval means some places (including the Philadelphia school district) are making those vaccines mandatory.

But even so, there’s a subset of vaccine-resistant folks who don’t seem inclined to have their minds changed in the face of all this evidence — and who also are the most likely to want to fight about it with me. As credible articles about the FDA approval flooded my social media news feeds, skepticism from this group lingered in the comments.

“What about the Moderna and J&J ones?” someone clapped back under an article about the new FDA approval. “Something must still be wrong if ALL of them can’t get approved at the same time.”

Someone else in the thread explained that FDA approval for COVID-19 vaccines was determined based on a standard timeline. For example, Moderna filed for FDA approval after Pfizer, so it’s no surprise that its vaccine hasn’t yet received the full green light. But this clarifying information did nothing to change the mind of the cynical commenter, who doubled down with more dubious commentary.

“You’re just moving the fucking goal post at this point,” another commenter responded to the anti-vaxxers. “One moment, you all are saying the vaccine needs to get FDA approval before you trust it. That has now happened. And now you’re saying all of the vaccines must get approval before you’ll consider getting just one of them. Give me a damn break. Just say you’re afraid to get a jab and move on.”

Exchanges like this affirmed a hard truth, one that I didn’t want to accept: Misinformation about the vaccination isn’t why some people aren’t getting it — personal fear is. And fear, I’m learning, runs deep.

After my fiancé and I mandated that our guests be fully vaccinated in order to attend our fall wedding, we began to unpack why a dozen of our invitees chose not to come as a result. It wasn’t that they were uneducated, brainwashed or conspiracy theorists — many were truly fearful to get a shot, and that fear got the best of them. Some loved ones who now aren’t attending initially referenced bogus news sources as a way to camouflage their decision. I now see, for example, that when one of them tried to argue, “Well, I read somewhere that [insert bogus claim about vaccinations],” it was actually a tactic to avoid admitting that they simply didn’t want to do it.

It’s not that they’re media-illiterate. I saw some of the same people who’d cited unreliable news sources about vaccinations later rely on credible news outlets to discuss other topics. A former high-school classmate shared articles from politically polarizing sites about vaccines — but then shared information from the New York Times, CNN and the Weather Channel about Hurricane Henri. So this individual knew how to find factual information about the weather, but rejected insight from these same credible sources on vaccinations? How? Why?

Ultimately, a lack of credible information isn’t the problem. Confirmation bias is.

When it comes to sensitive topics (such as religion, politics, sexuality, race, personal health/finance, and other matters that touch one’s core beliefs), people typically seek refuge with people and information that already resonates with their viewpoints. It’s the same reason some conservatives choose political commentary from Fox News rather than from MSNBC (and some liberals do the opposite). It’s similar with vaccinations. What I’ve learned from those in my circle who are choosing not to get vaccinated is that the issue isn’t a lack of information; it’s a personal choice — a core belief — rooted in either fear or downright stubbornness. There’s no debating the vaccine-resistant on a personal choice — no number of articles, logical counter-arguments or facts will change someone’s mind on a decision being made from the heart.

The mistake many of us who are fully vaccinated have made in trying to convince others to get vaccinated is that we assume the vaccine-resistant haven’t already considered it. Several of our former wedding guests told me they’ve looked into vaccinations but couldn’t bring themselves to get one. The more listening I’ve done to those who are adamant that they won’t get a shot, the more I’ve realized that continuing to debate unvaccinated people is excessive and may actually harden their positions. I’ve decided it’s time to let adults be adults, and I’ll rearrange my life around the unvaccinated accordingly.

I’m going to let health practitioners and government agencies handle the work of having these tough conversations with people still on the fence. (And in some cases, it’s working.) As for me, I’m going to continue to set personal boundaries when it comes to my social interactions during the pandemic. The facts will always be there, but I’m no longer exhausting myself trying to spoon-feed them to those who adamantly beg to differ. A mentor of mine told me that in contentious situations like these, it’s best to “love and let go.” I don’t hate the unvaccinated; I’m just realizing that debating them is no longer worth my precious time.

We can respectfully agree to disagree, but in this case, from a social distance.