Anyone who's been vaccinated so far is eligible to win the grand prize in Philadelphia's new vaccine lottery — and those from zip codes with the lowest vaccination rates have even better odds. 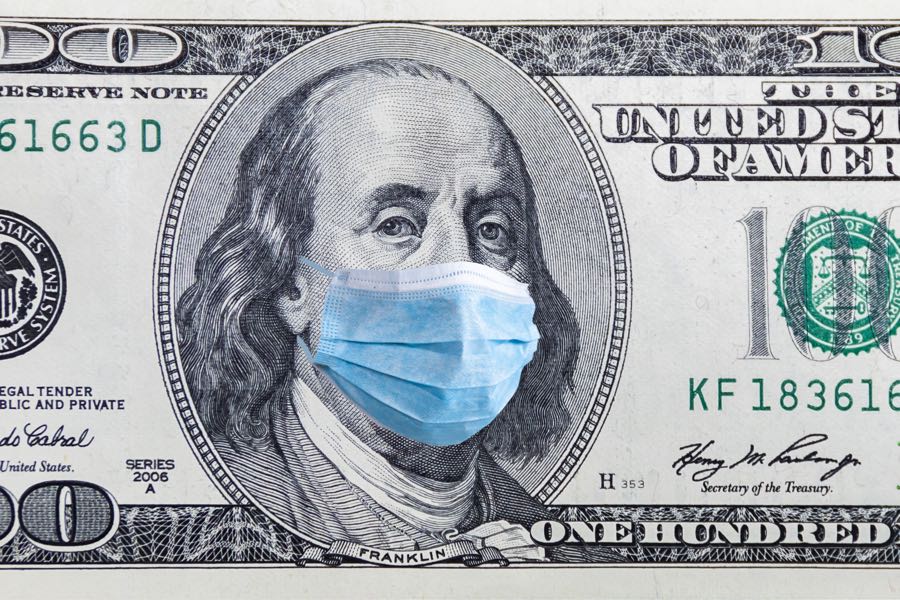 You could get 500 bills like this one (minus the mask), if you’re lucky enough to win the grand prize in the new Philadelphia vaccine lottery. Photo by Anton Petrus/Getty Images

If decreasing the chance of serious illness and death from the disease that has caused the worst pandemic in a century wasn’t enough of a selling point for you to get a coronavirus vaccine, then the Kenney administration has another offer for you: money. Specifically, $50,000.

That is the top prize amount in the newly announced “Philly Vax Sweepstakes,” a lottery to be held three times over the next six weeks with the aim of enticing the remaining 33 percent of Philadelphians yet to get their COVID vaccine to do so. “The last third are the hardest to reach for many reasons,” acting health commissioner Cheryl Bettigole said at a press conference announcing the initiative. “They may not have a predictable work schedule, they may have difficultly getting childcare, or they may have questions about the vaccine.” The lottery, the city hopes, will add a little bit more benefit to the cost-benefit analysis of those on the fence.

Similar lotteries are already underway across the country and the world: in California (grand prize: $1.5 million); in Ohio (grand prize: $1 million); in Poland (grand prize: 1 million … zlotys). Meanwhile in Philly, there are a number of local businesses providing post-vaccine benefits to customers, although none quite as steep as $50,000, which is higher than the median household income in Philly.

Philly’s vaccine sweepstakes came about thanks to Penn’s Wharton School, whose researchers were interested in designing a lottery to study how it might impact vaccination rates in the city. (In other states with lotteries, like Ohio, there is some early evidence that the lottery helped increase vaccinations by 45 percent after demand had dipped.) Penn will be footing the bill for the $400,000 in prizes, and the researchers will be reporting back on the impact of their program. Ala Stanford, from the Black Doctors COVID-19 Consortium, is also involved in the effort.

Here’s how the process will work: During each of the three drawings, six people will win $1,000, four will win $5,000, and two will come away with the grand prize of $50,000. Wanting to design a system that was extra enticing to the 20 zip codes with the lowest vaccination rates in the city, which also happen to be some of the zip codes that have had the most hospitalizations and deaths due to COVID, the Penn researchers came up with a special quirk: One of those 20 least-vaccinated zip codes will be randomly selected before each drawing, and half of the prizes will go those residents, making them about 100 times more likely to win than everyone else in the city. The first zip code with that advantage — for the lottery to be held June 21st — is 19126, which includes parts of East and West Oak Lane.

The second and third drawings will be held on July 6th and July 19th. (The special zip code selections will take place two weeks before those dates, to provide extra incentive and time for people to get vaccinated.) Technically, everyone in the city has a shot at being selected for the prize: The city will be picking winners from a database of all city residents, regardless of vaccination status. But to be eligible to win, you must be at least 18 years old, a Philadelphia resident, and vaccinated by the day of the drawing. (That means if you’re not vaccinated, you could conceivably receive a call from the city saying you were picked as a winner, only to not get the money. Good thing there’s a way to avoid that unfortunate scenario!) The city will independently confirm that all winners have, in fact, been vaccinated. Anyone who’s gotten one shot of the vaccine — regardless of date — is eligible.

Since the city’s database may not be totally accurate, vaccinated Philadelphians are encouraged to sign up right here in order to guarantee their place in the sweepstakes. (You can also register by phone at 1-877-642-5666 or by texting “Phillyvax” to 215-608–9799.)

With just 36 total prizes doled out, you are, of course, not especially likely to be chosen as a winner. But don’t think about that. Instead, allow us to suggest a different mindset: Even if you don’t get picked to win the boatload of cash, you’ll still have gotten the vaccine, making you that much less likely to die. Not a bad consolation prize!