Fresh off being named Major League Soccer’s 2020 Coach of the Year, Jim Curtin looks forward to the season’s first matches, which are expected to begin in April. 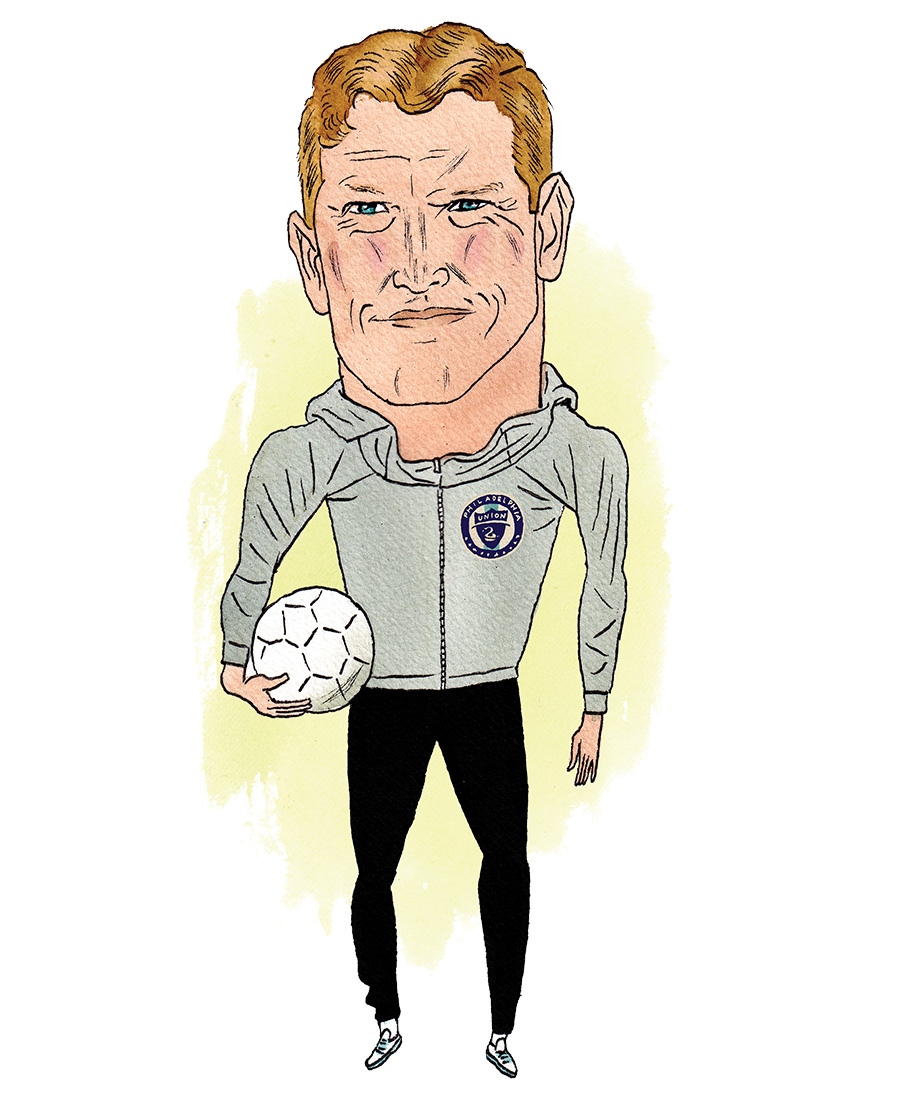 I was born at … Holy Redeemer, in 1979. Grew up in Oreland, which is basically just down the road from Glenside. I’ve lived in Chicago and L.A., but Philly is home.

My standard breakfast is … whatever our chef at work is cooking. He just came from El Vez, so when he does the Mexican breakfast burritos, I’m in heaven.

The team has been around since … 2010. I became a coach for the Union Youth Academy in 2010, then assistant coach of the team in 2012, and now head coach since 2014. We lifted our first trophy last season.

I’m always telling my players … to hold each other accountable. We don’t have a superstar on our team. No Michael Jordan. No Joel Embiid. The team is the superstar.

I discovered my love for soccer … when I scored a bunch of goals in a game when I was five. I knew it was what I wanted to do.

The most challenging thing about managing a pro sports team is … you have to always be “on.” There is not a lot of downtime. But I still say I’m happy that I’ve never worked a “real job” in my life.

One coach in another sport whom I really admire, living or dead, is … Vince Lombardi. I’ve read all of his books.

If I weren’t the Union’s coach, I would probably be … in finance, unfortunately. Sitting behind a desk. That’s what I went to Villanova for. Sounds so boring.

The second-best Philly sports team would have to be … the Sixers. I’m a huge fan.

My favorite soccer movie is … Victory from 1981, with Stallone. But there aren’t exactly many to choose from.

If you’re pouring me a drink, make it … a cold bottle of Bud. IPA is a guy’s version of a pumpkin spice latte. Oh, man. This is going to get me in trouble.

The sport I’m the worst at is … skiing. I just can’t get the hang of it. Actually, golf. I’m really bad at golf.

My best subject in high school at Bishop McDevitt was … basketball.

COVID has made the team … get to know each other better. We were stuck in a bubble in Orlando for 48 days.

My family has been ordering a lot of takeout from … Royal Izakaya, New Wave Cafe, Emmy Squared and Good King. My wife and I love to do a safe bar crawl with those places, too. You should check out the rooftop at Emmy.

The last pro soccer game I played in was … in L.A. in 2009, when I was with Chivas USA. We played against David Beckham. He beat us. How’s that for a last game?

My kids are always telling me … to get a TikTok account. They say it will make me super-famous.

To stay in shape, I … try to run about 25 minutes a day. I won’t lie to you: I bought a Peloton as a pandemic purchase. Never use it.

One thing most people get wrong about soccer is … that it’s boring. Americans want points. But the rest of the world knows that a 0-0 or 1-0 game can be beautiful as well. Philly should get that. After all, we love a good defense.

Published as “One of Us: Jim Curtin” in the March 2021 issue of Philadelphia magazine.