The Philadelphia police department finally released body-cam footage of the final moments of a troubled Black man’s life. There was no protecting-and-serving involved. 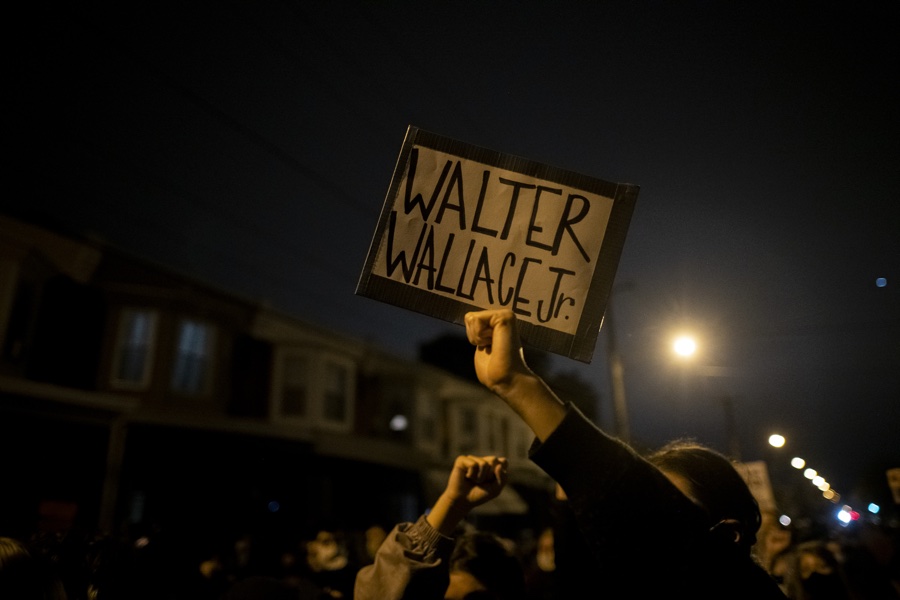 Protesters near the location where Walter Wallace Jr. was killed by two police officers on October 27, 2020, in Philadelphia. (Photo by Mark Makela/Getty Images)

Walter Wallace Jr. didn’t deserve to die. And new footage further proves it. Beyond these revelations, the world was reminded yet again how ineffective police are in Black communities because they don’t — or won’t — listen to the people they’re instructed to serve.

On Wednesday afternoon, amid a cloud of election anxiety, the Philadelphia police department finally released the 911 calls that led up to the fatal shooting of Wallace Jr. on Monday, October 26th, as well as body-cam footage from the two officers who were first on the scene.

The video includes footage from each officer’s point of view, capturing Wallace Jr.’s killing as well as the rage and chaos among community members that immediately followed.

Seconds before Wallace Jr. was shot to death, community members in the area can be heard screaming “He’s mental!” as the two officers yell at the 27-year-old to drop the knife he’s carrying. Wallace Jr.’s mother pleads with him to comply. The cops tell her to “back up,” then demand that Wallace Jr. “put the knife down” several times prior to shooting him at least 14 times.

“You killed my son, you killed my son!” Cathy Wallace, Wallace Jr.’s crying mother, yells at the officers, hitting them after watching them shoot him.

“He’s mental, he’s fucking mental,” another woman at the scene can be heard yelling at the officers as they try to clear people away from Wallace Jr.’s body in the middle of the street. The crowd confronts them about their decision to shoot. You can hear a young Black man telling them they are “fucking nutty” for their actions. The officers urge a Black woman in a “Black Lives Matter” t-shirt and a Black man, both standing over Wallace Jr.’s body and attempting to revive him, to leave the scene.

“He was fucking chasing us,” one of the cops is heard saying to another officer about the now-slain Wallace Jr. as more police arrive on the scene. Then the video ends as tensions mount and a police car, siren wailing, drives up the street.

This wasn’t the police coming to “protect and serve.” This was an abuse of force and power.

It’s obvious from the tape and police calls that Wallace Jr. — a father, a husband, and an aspiring musician — lived a troubled life that was impacted by a mental health disability. On one of the 911 disturbance calls, a family member mentions that Wallace Jr. has “a whole [criminal] record.” But none of this justifies the officers’ decision to shoot him — repeatedly — when the community was pleading with them to aid him.

The yells of “He’s mental” were cries for the police to help Wallace Jr., not for them to execute him. Police were called to de-escalate the situation; it appears obvious from the video that nobody in the neighborhood viewed him as a serious threat, much less as one that required a deadly response. Two men responding with rounds of gunfire to a man with a knife in the midst of a mental health crisis is a disproportionate use of force and power.

The Philadelphia police department’s manual of directives states that “aggressive action will not be taken by police personnel” when interacting with a severely mentally disabled person “unless there is an immediate threat to life or physical danger” to the individual, the police, or others nearby. The cops in this video clearly didn’t follow this directive.

The community called the police hoping to get resolution, But as a result of the shooting, there is only more Black trauma. Killing Wallace Jr. solved nothing. The police aggravated a mental health crisis that caused a ripple effect of disorder and pain in our city. When community members warn officers about the mental health of a suspect and the officers still choose to ignore what appears to be a mental health crisis, said cops become enemies of the people.

If the video makes anything clear, it’s that Walter Wallace Jr. should still be alive today. He deserved the same level of grace that countless white people dealing with mental health struggles have received from law enforcement. Racism, ableism and distrust led to the death of a Black man whose family now has to grapple with a police system they thought could help them. We are reminded yet again that when it comes to policing in Philadelphia — and America — cops don’t listen to those they are sent to protect.