Ninth-grade history teacher Emily Simpson on Zoom technical difficulties, online classes of 30-plus students, 12-hour work days, and the occasional feel-good moments amid all the chaos. 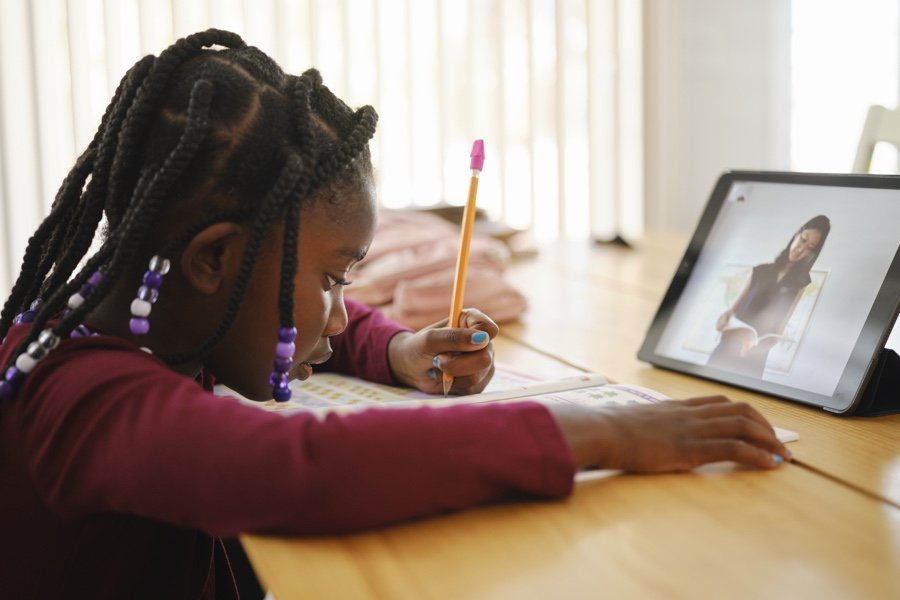 Online school is the norm in the Philadelphia School District until at least November. Photo by RichLegg/Getty Images.

If this is not the strangest school year of all time, then it’s surely close. Kindergarten through high school — all taught from home and through screens, at least in the case of the Philadelphia School District, which has nixed any in-person instruction until November at the earliest. (A few charter schools have opted for in-person teaching already.)

The pressure of the new system has affected everyone. Many of the district’s students — as many as 18,000 — don’t have sufficient internet access to log on to virtual school. (The Kenney administration put together a program to provide free internet to all students, but applications have lagged.) And even among the students who can log on, there’s the disembodied isolation of schooling from home. Starting at a new high school without many friends is hard enough. Imagine doing it when you can’t even meet anyone in person.

Then there are the parents. Those with young children have been (if they are the lucky ones) thrust into a quasi-teacher role themselves, making sure their kids stay connected and paying attention to Zoom class. Parents without the luxury of working from home have to wangle expensive childcare, or figure out other options.

Finally, you have the teachers. Already underpaid and under-appreciated, they have now been tasked with somehow managing a remote classroom (as if it weren’t hard enough to control kids when they were all together in the same room), mastering new technology, and maybe, if time allows, finding a way to actually teach something along the way.

It’s only a month into the school year, but a number of complaints have already started to trickle in. Emily Simpson, who teaches ninth-grade world history at the Walter B. Saul High School in Roxborough, has talked on Twitter of technical difficulties, poor planning and the general exhaustion wrought by this entire situation.

We wanted to hear more about what virtual class has really been like, so we caught up with Simpson, who’s in her fourth year teaching in the Philly School District. Here’s what she had to say.

In some of your tweets, you describe what appears to be a very challenging situation as an online teacher. What sort of duties are you supposed to juggle now in a given day while teaching, and how does that compare to what you had to handle before?

I think anyone who’s been in a classroom for any period of time can tell you that teaching is like juggling a bunch of spinning plates at once. You’ll have kids coming in and out, you’ll have parent emails. Virtual teaching is all of that, but in real time. I feel like usually during a virtual class now, I have students who are trying to get into the Zoom, students who are in the Zoom who are trying to figure out where we’re going, students trying to figure out how to use the Google Classroom. I have parents emailing about attendance or technology access. All of this is also fairly traumatic, I think, for students and for us, when we’ve got racial uprisings, we’ve got the pandemic, and a lot of students are seeing family changes at the same time. So all of these things are kind of piling on top of one another.

How does the level of instruction compare between in-person and online?

We definitely still do meaningful work in class together, and there is meaningful learning taking place. Something that’s been kind of positive about the situation is it’s really made us evaluate what parts of our curriculum are the most important. A lot of it has been pivoting towards open-ended discussion questions or some higher-order thinking, which has been really nice.

Clearly virtual teaching has been exceedingly difficult to put together day in and day out. What toll has it taken on you so far?

It has been incredibly crushing and completely draining. I think I’m pulling 12- to 14-hour days most days. And this is with material that I’ve taught before. It’s not like I’m reinventing the wheel of my curriculum. It’s more like every assignment takes three hours, it seems, to put together and figure out — trying to foresee tech issues like, how does this translate from a classroom activity to an online activity? How do I get students to engage via Zoom, when they would normally be doing something in person? I’m in my sixth year [as a teacher], but I’ve heard across the board, including from teachers who have been teaching for 20 years, that we’re all feeling the same kind of “June teacher-tired,” only in the third week of September.

A significant part of teaching, whether it’s high schoolers or younger kids, is about shepherding the students to make sure they’re actually learning. It seems like Zoom, or anything online,  is so ill-suited for that particular part of the job. Is that true?

It’s definitely hard. Teaching, I feel, is a very personal profession. It’s really founded on the connections that we’re able to make with students and even among students in our classrooms. I will say, it’s been interesting having the chat feature. Students are way more likely to talk in the chat. And it’s a different kind of communication than we would normally have, speaking out loud to each other in a physical classroom. It kind of has broken down some of the initial barriers, I think, of talking to your teacher. I feel like I’ve had kids be more willing to joke with me in the chat than they are out loud these first few weeks, which has been really cool and kind of interesting.

Have you received feedback from students about what they think about the online classroom?

There are positives and there are negatives. A lot of them like having their animals around — they like showing them off. They like that they can go to the kitchen for a snack when they’re hungry. Some of them like being in their bed the whole time. But I do think it’s isolating for them. I do think it’s harder to stay focused. I know I have a hard time focusing during Zoom calls. So I don’t know how they do it at 14. But they’re really trying.

The district has said it may return to some in-person instruction in November. Based on your seemingly stressful virtual experience, do you want to go back to school in person?

Definitely the health and safety of students and staff should be the first and foremost concern of the district. We can figure out the virtual learning thing and keep people safe. There is a pretty intense history of distrust, I think, between communities and staff and the district, in terms of building conditions and safety, that needs to be addressed. And I think for many of us, myself included, that piece — as tough as virtual learning is — is the more concerning factor.

A lot of workers, maybe none more so than the so-called “essential worker,” have felt abandoned by either their employers or the government during the pandemic. Do you feel similarly as a teacher?

In recent years, the school district has had roughly 25 percent teacher turnover year over year. That’s already an extremely high—and disruptive—number. What will the long-term consequences be of virtual teaching, or of potentially being forced to return in person to unsafe conditions?

I think that a lot of us — teachers, paraprofessionals, school-based staff — have for a very long time put up with quite a bit. Many of us work a ton of outside-of-contract hours. We fundraise for our own classrooms every single year. We stretch ourselves thin in terms of outside commitments and advocacy. We’re at City Hall, we’re testifying at school board meetings until one in the morning. And then to hear again and again that the city is considering school closures or staff layoffs, or trying to force us back into buildings that they can’t guarantee are safe — it takes a toll. And I do think we’re approaching a tipping point at which many of us may have to make a decision about whether or not we stay and continue to face the kind of disrespect that we’ve become unfortunately accustomed to.

You alluded to some of the daily challenges of online class — Zoom malfunctions and the like. Is there a specific example you can share that speaks in some way to your current teaching reality?

It’s interesting, because in thinking about that question now, I’m just like, Oh, a bunch of bad stuff happened to me today. I mean, there’s always something that’s kind of bad. But I’ve been really trying to document the good stuff so I remember that there is always good stuff in working with students.

Here’s one example: I’ve been having students do passion PowerPoint presentations where they just pick something that they care about, or want to argue about, and they present it to you. So this week, I had one student talk about why chickens are the best pet. And then another student went on a huge rant about how one character from the Vampire Diaries is not a bad person and just needed to be loved. And it turned into this huge Zoom argument between my students, where they were interrupting each other and unmuting without signaling at all. It was this loud eruption of chaos, but like, kind of in a positive way, because they were finally talking to each other out loud. So even as I was like, “Oh, my God, please stop yelling,” I was also like, “Oh, they’re talking to each other.” This felt almost very normal. Kids are still kids, I guess, is the moral of that story.