My Pandemic Story: A Funeral Director on Preparing for What’s to Come

Victor Baldi III, the fourth-generation funeral director at Baldi Funeral Home on South Broad Street, on bracing for the surge amid a pandemic. 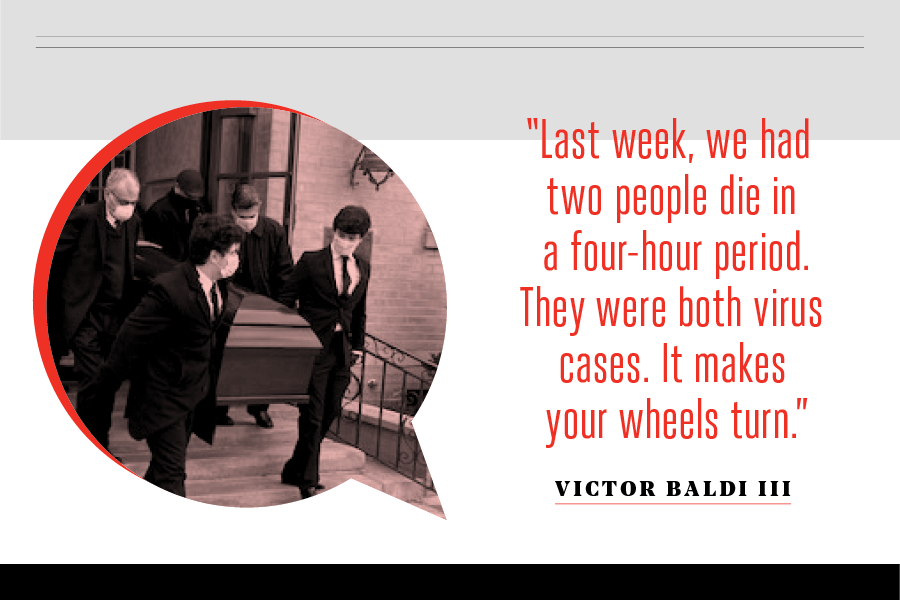 Published as a part of the “This Is My Pandemic Story” article in the May issue of Philadelphia Magazine. Here, Victor Baldi III, fourth-generation funeral director at Baldi Funeral Home on South Broad Street, shares his experience.

For a traditional funeral, you have the viewing, the casket, the burial. In recent years, we’ve had a lot more cremations. The cremation rate keeps going up, and it’s only going to continue to go up. We don’t have a crematorium on-site; we have a working relationship with crematoriums in Philadelphia and the suburbs. There’s not so much of a memorial process with that, and it could affect the bottom line.

In terms of virus precautions, we’re concerned less about that here than with the removal of the deceased individual who passes at home or in the hospital. We’re leaving the person in refrigerated storage until the death certificate is signed and we know the cause of death. Surgical gloves are hard to find — I did make a purchase of those. We have plenty of N95 masks and plastic facial gear — helmets. And body suits.

I leave my work clothes here. I have a wife and two children quarantined at home. My oldest is a senior at Neumann-Goretti, and my second son is 13 months younger. I don’t want to bring germs home. I made a call from my couch at night to my sales rep to ask about hand sanitizer. He said, “Vic, we’re really low.” But he found me two cases of Purell. We put up dispensers on the walls here. I guess I sort of panicked, thinking of my business and my family. That’s everything to me, my family business and my family.

My Pandemic Story: 12 Philadelphians on How COVID-19 Turned Their Worlds Upside Down

In addition to the universal precautions we’re taking — disinfecting ourselves, our clothes, our protective wear — we’re also following government guidelines that only allow gatherings of 10 people or less. It’s hard to tell anybody that at the time of death — that they have to limit who can pay respects. However, it’s not just us. Everyone in the industry is following the rules. The cemeteries are as well.

When you see what’s going on in New York — I talked to a friend in the industry who’s in Queens. It’s not good up there. I’m wondering if we’re the next wave — if this is the quiet before the storm. Last week, we had two people die in a four-hour period. They were both virus cases. Both chose direct cremation. We take the body into our care, take it to the crematory, hand the remains back to the family. I’m just one funeral home. To have back-to-back deaths like that — it makes your wheels turn.

Published as part of the “This Is My Pandemic Story” feature in the May 2020 issue of Philadelphia magazine.