My Pandemic Story: Flyers Star James Van Riemsdyk on Suspending the Season in the Midst of a Hot Streak

The Flyers left wing is back home and reflecting on an NHL season in limbo. 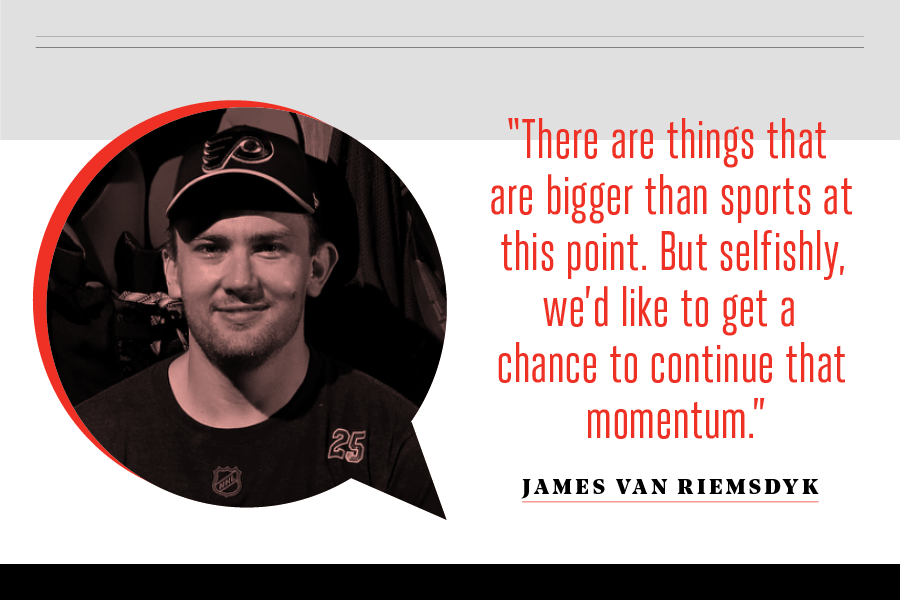 Published as a part of the “This Is My Pandemic Story” article in the May issue of Philadelphia Magazine. Here, James van Riemsdyk, Philadelphia Flyers left wing, shares his experience.

A month before anything really happened, I was talking with my agent, and he was telling me, “You guys might be playing games without fans pretty soon.” I hadn’t really heard much about the coronavirus — it was still sort of a distant thing. And I’m thinking to myself, “That doesn’t seem like that would ever happen, right?”

And then things progressed pretty quickly. The first basketball player got diagnosed, and then I knew we were probably gonna have to go on a bit of a hiatus. We were on a nine-game winning streak. We were playing so well, but for me, I had gotten hurt — I broke my finger basically a week before the shutdown. When you’re hurt, you’re kind of quarantining yourself already, trying to recover. You’re able to follow things a little bit closer and realize the scope and the seriousness of it all.

I live right in the city, basically in Society Hill/Old City. Most guys decided to go home to the cities they live in during the summer, where they have their support systems and family. I was in Philly at the very start and went back to my summer home in Minnesota in late March. I’m the Players Association rep for our team, so I’m responsible for relaying different messaging from the union and keeping guys updated on guidelines. The players have a group chat, and we’ve been on the phone — we had kind of a group FaceTime one time, which was craziness with everyone talking. I don’t know if anyone could really hear what anyone was saying, because everyone was trying to get ahold of the floor and the mic. So we’ve kept that bond, but obviously it’s a way different feeling than during the season, when we’re with each other every waking minute of the day.

My Pandemic Story: 12 Philadelphians on How COVID-19 Turned Their Worlds Upside Down

I still have family in Middletown, New Jersey. My youngest brother is there with both my parents. I think he’s enlightening them on the world of streaming shows. My parents within the last couple months have finally figured out Netflix. So my dad’s like a college kid, up till four in the morning watching Curb Your Enthusiasm. He’s like, “This is great! It’s all right here!”

We’re building a house out here in Minnesota, and it should be done within the next month, but for the time being, we’re living with my in-laws. But I was able to grab some workout equipment, so I’m able to stay fit and ready to go. Other than that, I’m just watching a bunch of shows — Ozark, Tiger King — doing some rehab for my finger, and I’ve got a couple of books lined up that I’ve been staring at that I could and should probably start reading: Ben Greenfield’s Boundless, Mark Manson’s The Subtle Art of Not Giving a F*ck, Tom Brady’s The TB12 Method.

Sitting at home with a lot of free time, I’ve been thinking about our season a lot more. It seemed like we had a good thing going and then you have to halt everything. Certainly, there are things that are bigger than sports at this point. But selfishly, in the sense of just the hockey, obviously we’d like to get a chance to continue that momentum.

Published as part of the “This Is My Pandemic Story” feature in the May 2020 issue of Philadelphia magazine.