He spent his career with the Lakers, but the guy I knew never lost his love of Philly. 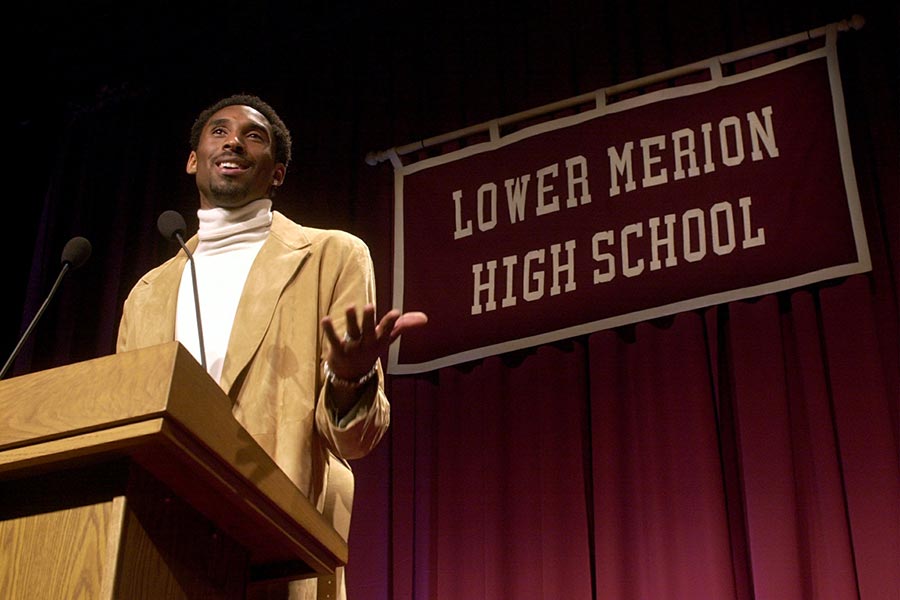 The images of Kobe flashed all day yesterday, stringing together a rush of sadness and sobering thoughts of mortality and the fragileness of life. Young Kobe and Historic Kobe and HOF Kobe whirled across the screen, the colors always the purple and gold of the Lakers. There’s a Kobe dagger to win a game, and there’s Jack Nicholson applauding. There’s Kobe winning another title, and there’s another reverential celebrity. There’s post-career Kobe shootin’ it with Jimmy Kimmel and Kobe welcoming you to LA and Kobe the content-creator all over the Hollywood trades. There’s Alicia Keys last night at the Grammys inside the Staples Center — “the house that Kobe built” — mourning his loss with the rest of music’s weepy-eyed who’s who.

And while it’s undeniable that Kobe Bryant became the prince of that royal world, I can’t help but exclaim he was every bit ours.

I know he spent a portion of his childhood in Italy and that he settled down in Southern California. But he was born of our soil.

His game and his personality and his ways were altogether Philadelphian.

In the middle of that stream of images, one stays with me. On TMZ.com, there is Kobe courtside at a Lakers game with his arm around Gigi — every bit her father’s daughter and every bit the world’s same tragic loss. Kobe smiles widely and proudly. I study his face. It’s familiar. Not because I know it so well. It’s the look. He looks like a Philadelphian. The look that is born of Lower Merion High School and Larry’s Steaks.

The Eagles ski cap he wears is just the exclamation point, neon for the blind.

I am an unadulterated and unapologetic homer. I love this town. So I champion all people and things Philadelphia, and Kobe Bryant was one of our greatest exports ever.

It’s why I always rooted for him, except for that one series back in 2001. He said he was going to cut our hearts out and he did, and I remember defending him at the time because he acted like a true Philadelphian would act.

He embodied us in his desire to win. He worked tirelessly. He fought anyone in his way and was deaf to the insults. He had balls.

I think of Jason Kelce in a Mummer’s costume at the parade talking who we are and how good it felt to win being true to our town. I think of Kobe genuinely celebrating that Super Bowl … like all of us did. I know he felt a kinship to home.

I remember doing a piece on him for the Inquirer back in October of 1999. He was 21 years and two months old. It was before his great ascent. The Lakers had fired Kurt Rambis, one season after firing Del Harris before that, and they all blamed Kobe. He was embroiled in a public feud with Shaq, and the world was against him.

Inside LA Southwestern College, Kobe sat with a cast on his hand, watching new coach, Phil Jackson, conduct practice. He was undeterred. He knew what they were all saying about him. He had heard the trade rumors. None of it mattered. He would fight and defeat every obstacle and fulfill his destiny.

He told me so that day.

He showed me his new “Batmobile” — a dazzling black Mercedes that boasted the reflection of a mirror — and offered me more time to chat if I wanted to take a ride with him to LAX and grab a cab back to my hotel.

I never enjoyed the snarled LA traffic so much. We talked about basketball and cheesesteaks and Will Smith and Schoolly D and the Eagles. When I left him, he said: “Philly, baby! Make sure you put in there how much I love it.”

He spoke Philly that day. I can still hear the trace of our accent.

He was handsome and articulate and one of the greatest players in the history of the game that we revere here. He didn’t need a nickname. The Black Mamba thing was more of a clever moniker for his brand. Kobe was softer. The four letters together stand alone. Endearing.

The memories flood my mind’s eye. The championships. The great performances. The fortitude to fire away shots as a kid in a man’s league. The polished, artistic play later on. The pride. At the end he wanted to guard LeBron in the NBA All-Star game — like he was protecting his legacy and his place directly behind his hero, Mike.

He was one of the special ones, and he was our gift to the world.