What Two Centuries of Census Records Taught Us About Philadelphia

The hidden story behind all those numbers. 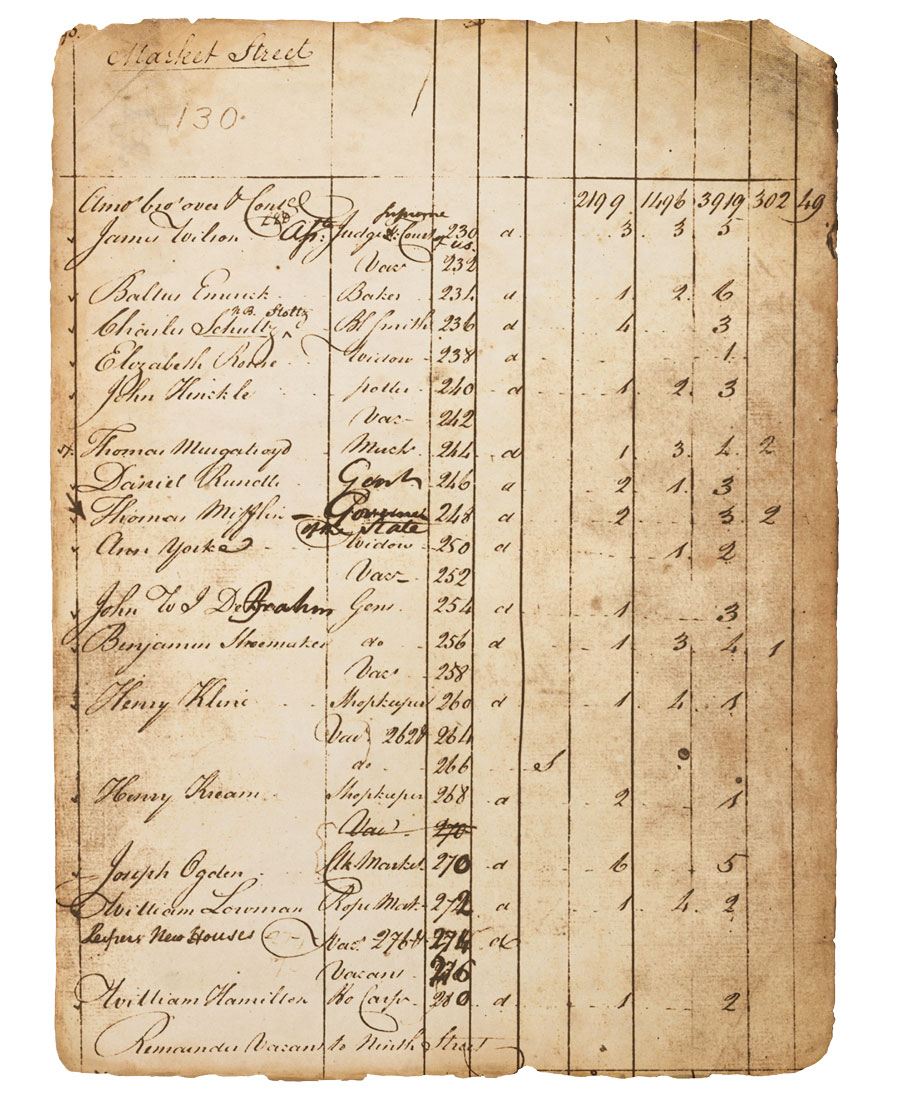 More than two centuries after Congress (meeting right here in Philly) first decreed it, the census takers will be out again this year. The results of the once-a-decade count — not to mention the questions themselves — tell a hidden story about our city … and our country. 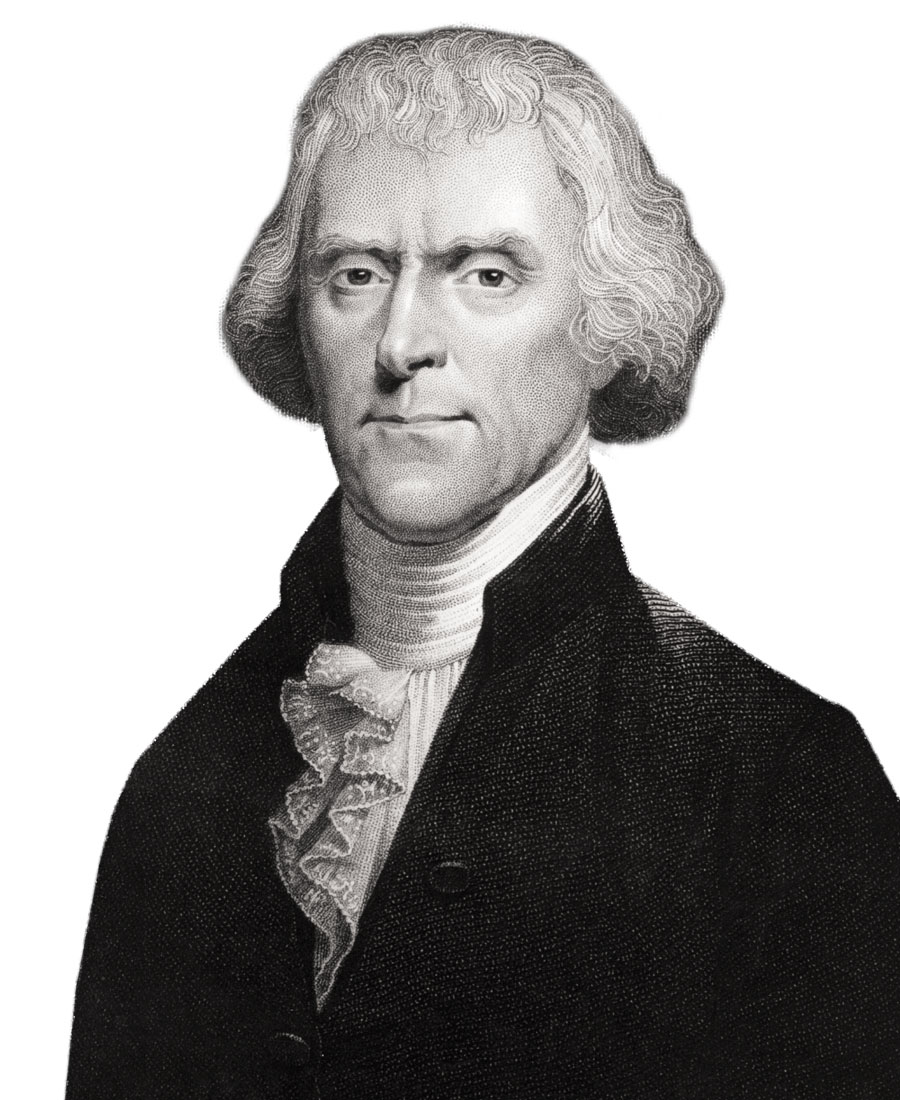 → As set out in Article 1, Section 2 of the U.S. Constitution, representation in the House is to be apportioned by “the whole number” of free persons counted in the 1790 census plus three-fifths of all other persons.

City Population: 41,220
→ The questionnaire for the 1800 census counted free white males and females in five age categories: under 10; 10 but under 15; 16 but under 25; 25 but under 45; and over 45. Native Americans, slaves and free blacks were counted in single categories without ages.

City Population: 63,802
→ The 1820 census was the first to ask if respondents worked in agriculture, commerce or manufacturing.

→ The 1840 census is the first to ask about literacy; the 1850 census adds a question on school attendance.

City Population: 121,376
→ The 1850 census contains a supplemental schedule for slaves.

City Population: 565,529
→ Seven consecutive years of famine in Ireland in the mid-19th century send hundreds of thousands of refugees to America; by 1860, there are 95,458 Irish here, making up the largest immigrant group in the city.

→ The Act of Consolidation in 1854 subsumes more than two dozen surrounding districts and townships into the city limits. The change helps account for a 366 percent leap in population between 1850 and 1860.

City Population: 1,046,964
→ In 1890, the largest group of foreign-born Philadelphians is still the Irish, who make up 41 percent of immigrants.

→ The 1890 census is the first to show multiple cities with populations of more than a million, including Philadelphia. 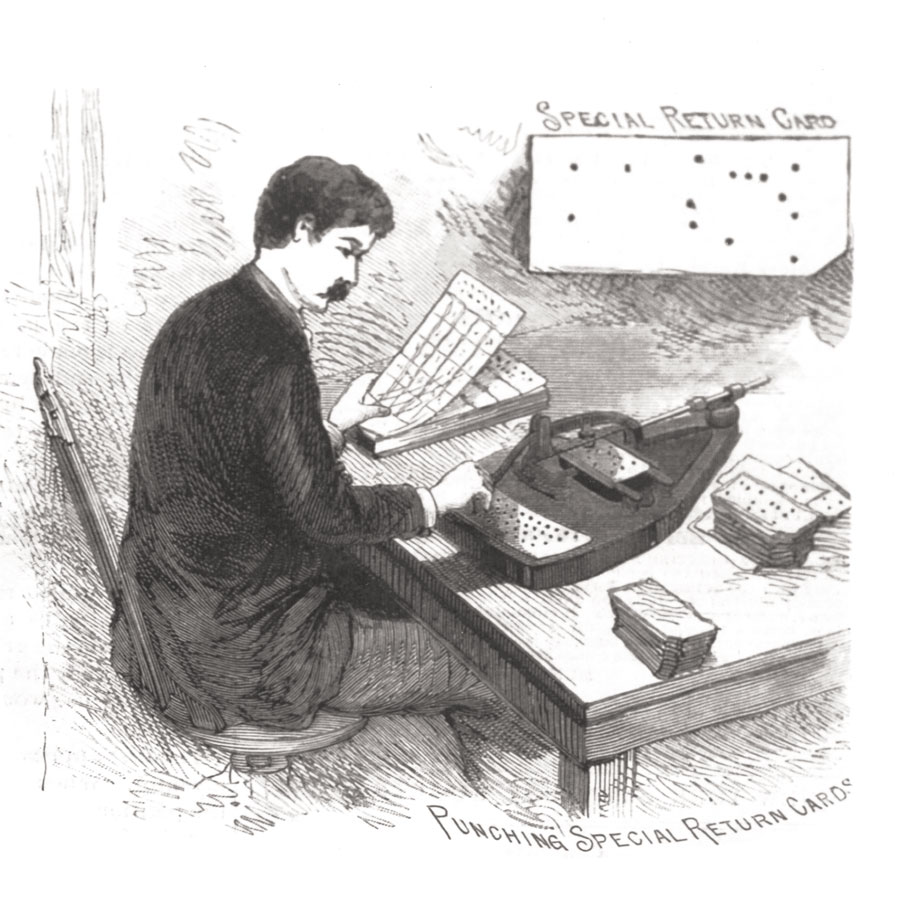 For the 1890 census, data was entered on punch cards and tabulated by machine. Image via Getty Images

→ The 1890 census is the first in which data is entered on punch cards and tabulated by machine. Time required to compile results is reduced from eight years for 1880 to just six years, with a rough count released after a mere six weeks — leading to general public rejection of the results.

→ The 1900 census is the first to ask whether a respondent’s home is owned or rented and, if owned, whether it’s mortgaged.

→ In 1900, for “Color or Race,” choices are W for white, B for black, Ch for Chinese, Jp for Japanese, and In for American Indian. A separate schedule for Indians includes the question, “Is this person living in polygamy?” 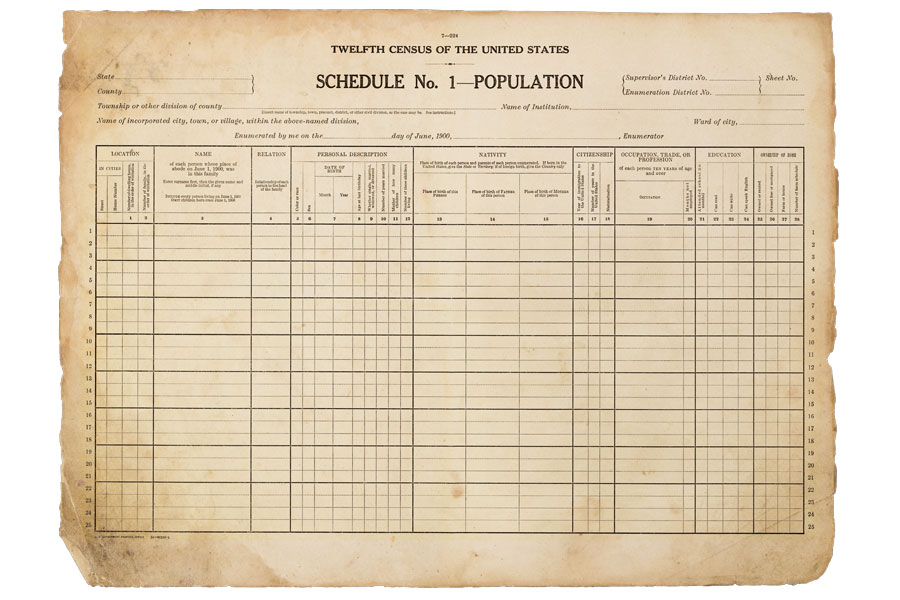 City Population: 1,549,008
→ The 1910 census lists more than 30 questions, among them whether anyone in the household is a survivor of the Union or Confederate Army or Navy. 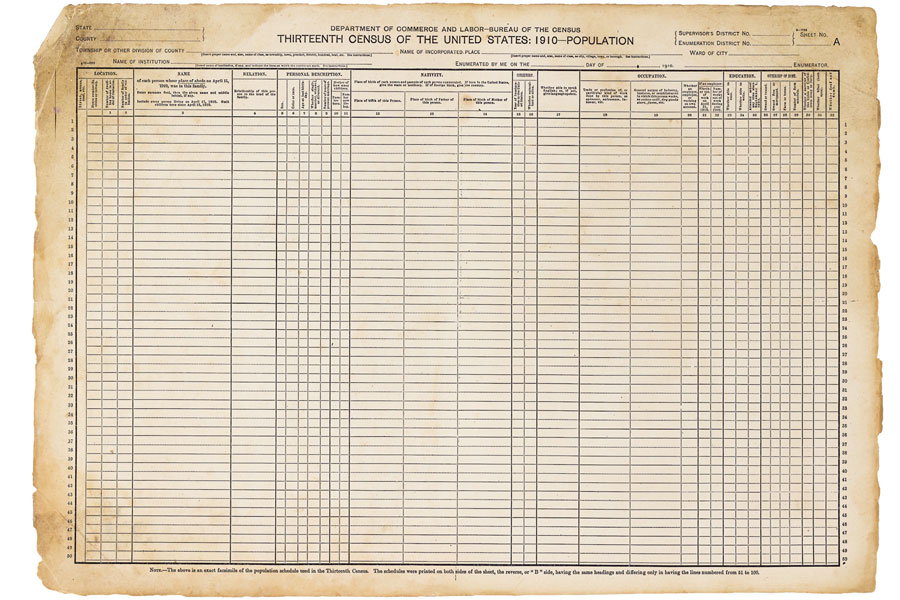 City Population: 1,823,779
→ In 1920, the largest group of immigrants in Philadelphia is Russian, mostly Jews fleeing pogroms. 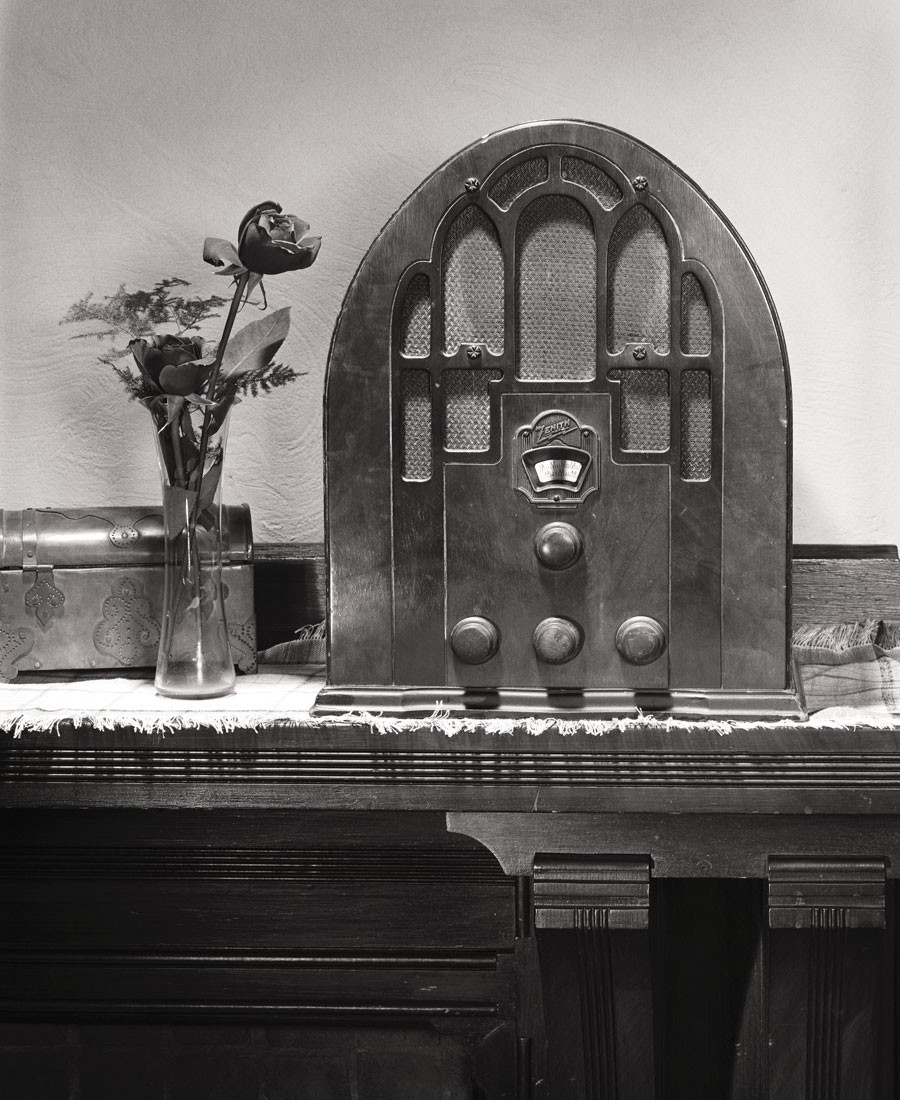 The 1930 census asked if households had radios. Image via Getty Images

→ The 1930 census asks whether the household has a radio. 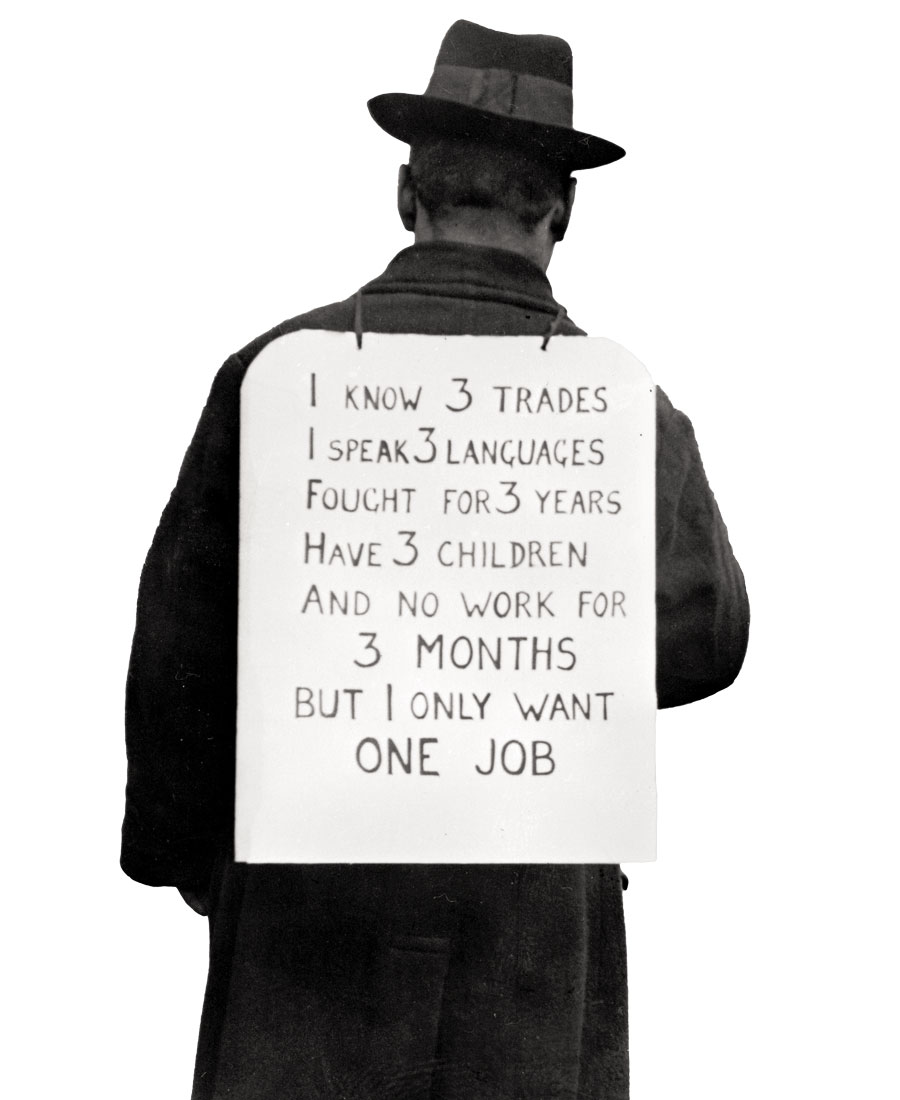 The 1940 census took place in the wake of the Great Depression. Image via Getty Images

→ In the wake of the Great Depression, the 1940 census asks 11 questions related to jobs, including hours worked in a week; whether respondents are in private, non-emergency government or public emergency work; and duration of unemployment.

City Population: 2,071,605
→ The 1950 census is the last to ask respondents whether they’re naturalized citizens.

→ The ENIAC computer developed at Penn for the U.S. War Department in the 1940s is updated into UNIVAC I, the first successful civilian computer, built for the Census Bureau and dedicated in 1951. 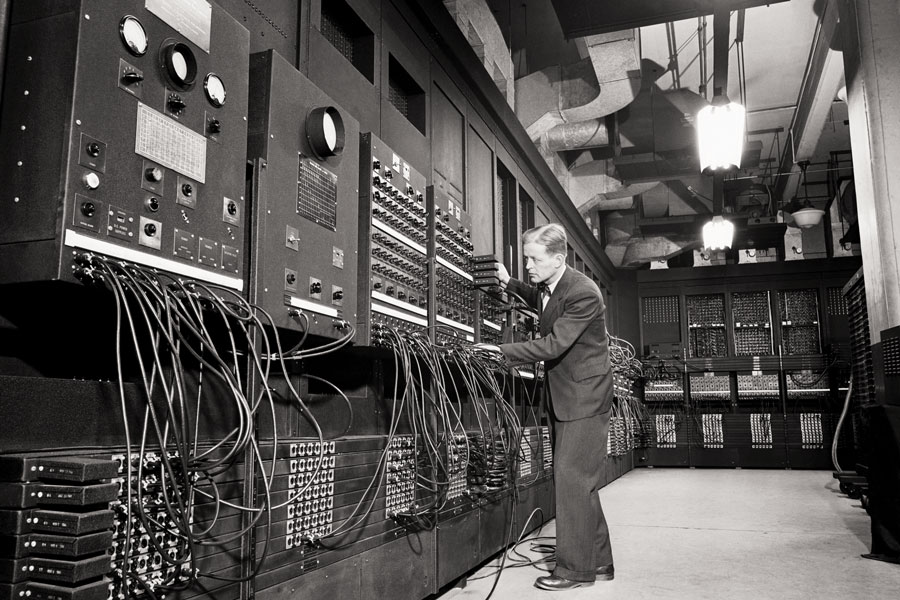 City Population: 1,688,210
→ After Latino activists complain during the 1970s, the Census Bureau adds a separate category for Hispanics and Latinos in 1980. (The 1970 census included the category only on the long form.)

→ The 1980 census is the first in which respondents self-identify race/ethnicity rather than having it designated by the census taker. More than 63,570 city residents self-report being of Hispanic origin — 3.8 percent of the population.

City Population: 1,585,577
→ Three men who will become president serve as directors of the census: Thomas Jefferson in 1790, John Quincy Adams in 1820, and Martin Van Buren in 1830. The post is held by a sea of white male faces until Barbara Everitt Bryant is appointed for the 1990 census. She’s succeeded by Martha Farnsworth Riche. Still all white, though. 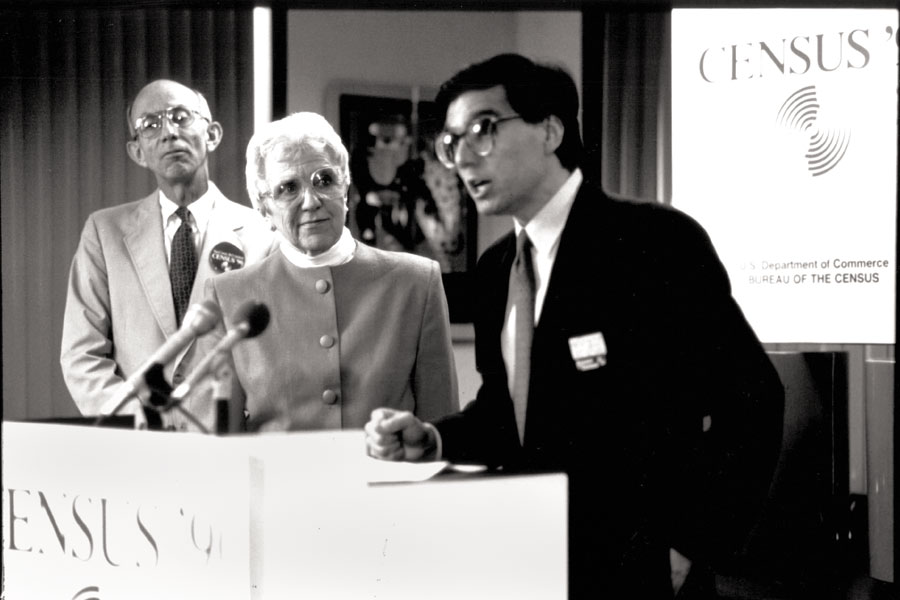 Barbara Everitt Bryant was appointed director for the 1990 census. Image via Getty Images

→ For the 2020 census, the Obama administration proposes refining racial categories to add “Hispanic, Latino, or Spanish” and “Middle Eastern or North African” as options. The Trump administration nixes the changes, which were intended to address the fact that “some other race” was the third-ranked racial group in results from 2000 and 2010.

Published as “Census Sensibility” in the January 2020 issue of Philadelphia magazine.